The main objective of the present work is to determine crystal structure of the ligand by x-ray methods and to perform molecular docking studies of the ligand 4- Phenyl -5-Pyrazinyl-3-mercapto 1,2,4 Triazole with protein focal adhesion kinase (FAK) domain using the software, Autodock and pymol. Macromolecular modeling by docking studies provides the most detailed view possible of drug receptor interaction. It has created a new rational approach to drug design, where the structure of drug is designed, based on its fit to three dimensional structures of receptor site, rather than basing it on analogies to other active structures. The above titled compound is binding with FAK protein. This may act as inhibitor to FAK and can be used for anticancer therapy target.


* Address correspondence to this author at the Department of Physics, School of Engineering and Technology, Jain University, Bangalore, India; Tel: +9448419437; E-mail: kiranxrd@gmail.com 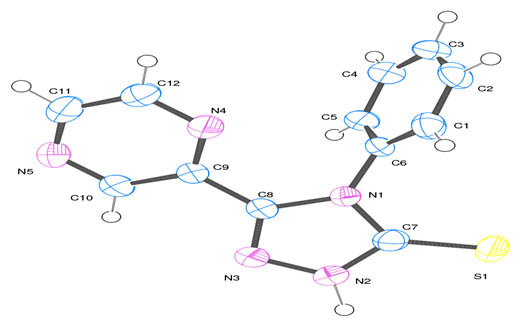 ). The crystal data of the compound are shown in Table 1.

The 3D structure of FAK (PDB code: 2ETM) [8Andersen, C.B.; Ng, K.; Vu, C.; Ficarro, S.; Choi, H.-S.; Gray, N.; He, Y.; Lee, C.C. Crystal Structure of Focal Adhesion Kinase Domain Complexed with ATP and novel 7H- Pyrrolo [2,3-d] pyrimidine scaffolds. (to be Published).] was downloaded from the protein data bank. By adding the polar hydrogen bond to the receptor FAK which is required to convert PDB to PDBQT format. The water molecules around the ligand and cofactors were removed from the protein.

Docking allows the user to virtually screen a database of compounds and predict the strongest binders based on various scoring functions. The docking analysis of the ligand 4-Phenyl-5-pyrazinyl-3-mercapto-1,2,4 triazole (PYT3) and their analogs with focal adhesion kinase receptor was carried by using Autodock 4.2 and FlexX docking software. The reference ligand 7PY (7-Pyridin-2-Yl-N-(3,4,5-Trimethoxyphenyl)-7h-Pyrrolo[2,3-D] pyrimidin-2-Amine) was selected for the binding site analysis [9Rand, H.P.; Dale, M.M.; Ritter, M.M.; Moore, P.K. Pharmocology, 5th ed.; NewYork, 2003, pp. 51-63., 10Golubovskaya, V.M.; Kweh, F.A.; Cance, W.G. Focal adhesion kinase and cancer. Histol. Histopathol., 2009, 24(4), 503-510.
[PMID: 19224453] ]. Docking of the protein ligand complex was mainly targeted at the predicted active site. The interaction was carried out to find the favorable binding geometries of the ligand with the protein. The selected residues of the receptor were defined to be part to the binding site. The molecules binding to a receptor, ideally must inhibit its function, and thus act as drug [11Srivastava, V.; Kumar, A.; Mishra, B.N.; Siddiqi, M.I. Molecular docking studies on DMDP derivatives as human DHFR inhibitors. Bioinformation, 2008, 3(4), 180-188.
[http://dx.doi.org/10.6026/97320630003180] [PMID: 19238244] ]. The collection of 1,2,4 triazole derivatives and receptor complexes was identified via docking. Molecular docking was carried out to find the favorable binding geometries of the ligand with the protein. 1,2,4 triazole derivatives were then docked at predicted active site of FAK, using Autodock4.2 (Lemarkian Genetic Algorithm) and Flexx (Incremental Docking Algorithm). The pose received with the highest dock score from Flexx as well as lowest binding free energy from Autodock4 was then selected for further analysis [12Kramer, B.; Rarey, M.; Lengauer, T. Evaluation of the FLEXX incremental construction algorithm for protein-ligand docking. Proteins, 1999, 37(2), 228-241.
[http://dx.doi.org/10.1002/(SICI)1097-0134(19991101)37:2<228::AID-PROT8>3.0.CO;2-8] [PMID: 10584068] ]. The best binding pose at the binding site is shown in Figs. (2 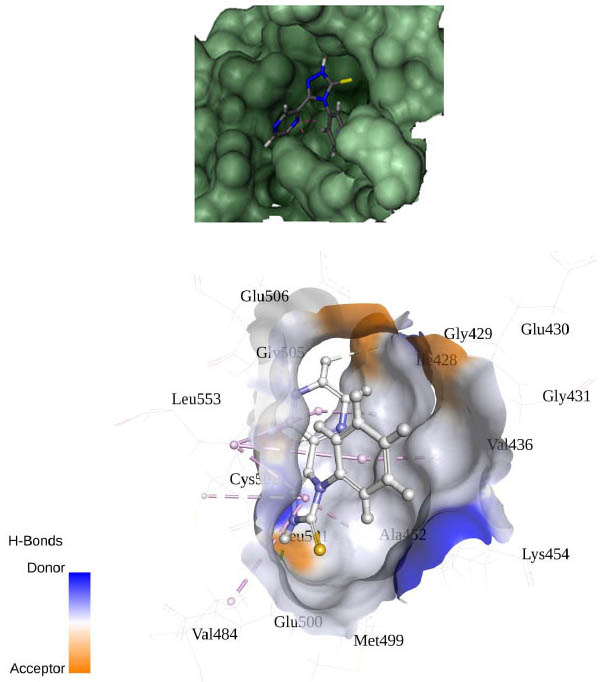 The docking result showed the best 10 binding sites. The best dock energy -5.7 kcal/mol was campared with the reference ligand (7PY) and the docked energy was -5.87 kcal/mol, which showed that the protein ligand interactions are good fit with the target protein. The molecular docking studies shows good affinity of the ligand towards the protein. The higher the negative value of the energy of binding, the better is the affinity of the molecule to the receptor. The intermolecular interactions between the ligand and the protein were investigated. 1,2,4 Triazole for the most part, subsists in the 1H-1,2,4 triazole tautomeric form and the 4H-1,2,4 triazole form does not exist nor in solid state neither in solution form. In general amino substituted 1,2,4 triazoles were electronically preferred in a tautomeric equilibrium dominantly in 1H form [13Dolzhenko, A.V.; Pastorin, G.; Chui, W.K. An aqueous medium synthesis and tautomerism study of 3(5)-amino-1,2.4 Triazoles. Tetrahedron Lett., 2009, 50, 2124-2128.
[http://dx.doi.org/10.1016/j.tetlet.2009.02.172] ]. In the crystal lattice there were two intermolecular interactions, one potentially weak intramolecular and some C-π....π super molecular interactions [14Jeffrey, G.A.; Maluszynska, H.; Mitra, J. Hydrogen bonding in nucleosides and nucleotides. Int. J. Biol. Macromol., 1985, 7, 336-348.
[http://dx.doi.org/10.1016/0141-8130(85)90048-0] ]. In the solid state, supermolecular interactions stabilize the crystal structures.

The intermolecular interactions between the ligand and the protein were investigated. The synthesized chemical compound showed a good fit with the protein. Thus the bioactive compound interacting with the target can be used as a potent inhibitor to block the action of FAK protein. The docked value can be considered for further analysis.

The author would like to thank to Prof.T.N.Guru Row, SSCU, IISC, Bangalore for providing the XRD facility. The author also thanks to Director, SET, Jain University, Bangalore for support and encouragement for my work.