Antibacterial Activity of Chitosan on Some Common Food Contaminating Microbes

The antimicrobial activity of chitosan was thoroughly investigated. The prepared chitosan solutions at diluted concentrations and in aerosol form, of which applied to apples and bananas had considerably prolonged the storage time of the fruits and prevented them from microbes contaminating and growing. The study has reconfirmed that chitosan exhibits high antimicrobial activity against pathogenic and spoilage micro-organisms, including fungi, and both Gram-positive and Gram-negative bacteria. This study has also found that the Minimum Inhibition Concentration (MIC) of chitosan solution on Staphylococcus aureus was 3.97 mg/ml and the Minimum Inhibition Concentration of chitosan solution on Pseudomonas aeruginosa was 3.49 mg/ml.

Microbial contamination, microbial growth and oxidation of lipids in foods during processing and storing are the major causes of food-borne illnesses and loss of shelf life. A considerable number of antimicrobial agents and antioxidants are therefore permitted by regulatory agencies to minimize the deterioration of food quality. But, synthetic preservatives are suspected of being responsible for some severe toxic effects. Thus, natural preservatives such as chitosan against different groups of microorganisms, such as bacteria, yeast and fungi have received considerable attention in recent years [1].

Chitosan, a polysaccharide biopolymer that combines a unique set of versatile physiochemical and biological characteristics which allow for a wide range of applications, of which has received attention as potential food preservative of natural origin due to its antibacterial and antifungal activities [2].

The major physical characteristics that determine the functional properties of the polymer are the molecular weight and the crystallinity [3]. Crystallinity is maximal for both chitin (i.e. 0% deacetylated) and fully deacetylated (i.e. 100%) chitosan. Minimal crystallinity is achieved at intermediate degrees of deacetylation. Currently, chitin and chitosan are manufactured commercially in large scale from the outer shell of shrimps, lobsters and crabs.

Chitosan is insoluble at neutral and alkaline pH, but forms water-soluble salts with inorganic and organic acids including glutamic, hydrochloric, lactic and acetic acids [4]. Upon dissolution in acidic media, the amino groups of the polymer become protonated rendering the molecule positively charged. The degree of acetylation represents the proportion of N-acetyl-D-glucosamine units with respect to the total number of units.

Chitosan exhibits a variety of physiochemical and biological properties; therefore it has been found numerous applications in various fields such as waste and water treatment, agriculture, fabric and textiles, cosmetics, nutritional enhancement, and food processing. In addition to its lack of toxicity and allergenicity, its biocompatibility, biodegradability and bioactivity make it a very attractive substance for diverse applications as a biomaterial in the biomedical, food, and chemical industries [5-7].

In this paper, successful application of chitosan in terms of microbial inhibition on some common food contaminating microbes is reported

Chitosan flake with DD of 90% was obtained by adapting Nguyen Van Toan’s Method (2006), of which, the shrimp shells were preconditioned using dilute acetic acid [8].

Acetic Acid 1% (v/v) was prepared by taking 10.05ml of Glacial Acetic Acid (99.5%) to the 1 liter-volumetric flask then distilled water was added until the volume reaches the bar of the volumetric flask. The flask was inverted several times to have the solution well mixed.

All the culture mediums were prepared by following the formulation of in Ronald M. Atlas [9]. with modification to match with the chemical availability at the laboratory.

In order to make agar medium, 1.6 % (w/v) agar was added to the broth and heated to boiling. All Petri dishes, test tubes, related equipments and culture medium must be sterilized by autoclaving for 15 min at 15 psi pressure and 121°C.

Chitosan film was prepared by dissolving 1% (w/v) in 1M acetic acid. After filtration, the chitosan solution was cast onto a plastic plate, dried at 40°C and neutralized by soaking in 0.1 M NaOH for 30 min at ambient temperature. The membrane was then, subsequently washed thoroughly with distilled water and dried at 40°C for further examination of its quality. Chitosan membrane was tested for its thickness using a Mitutoyo micrometer, of which was adapted by Trung TS, et al, 2005.

Chitosan solution, after filtration and neutralization to pH 5.5, was titrated to determine the redundant acetic acid in the final solution. Solution of NaOH 0.1M was used as the titrant and phenolphthalein was used as color indicator. Sample of chitosan solution of pH at 5.5 was diluted ten times. 20ml of sample solution was taken to one flask for titration and 1-2 drops of phenolphthalein was added. The titration process was performed 5 times.

Three kinds of microbes were purchased from the Institute of Drug Analysis, Ho chi Minh City, Vietnam. Staphylococcus aureus and Pseudomonas aeruginosa were cultured with LB broth in 100ml-Erlen flask for stocking and sub cultured every week on both LB agar and broth. Aspergillus niger was cultured on Sabouraud agar and the spore suspension was made by pouring 20ml of sterile physiological salt solution (NaCl 0.85%) into the 5-day-culture agar surface and gently scraped to remove the fungal spore [10]. The spore suspension was transferred into other sterile tube and keep in cool temperature for further use.

Sterilized Luria-Bertani broth was used for MIC estimation of Staphylococcus aureus and Pseudomonas aeruginosa [11]. The chitosan solution (pH 5.6) was added into each test tube with the gradually increasing ratio: 1.1 up to 1.30. Sterilized water was added for balancing the volume in every test tube. The concentration of chitosan was calculated based on the whole volume of liquid inside each test tube.

Spore of Aspergillus niger was inoculated with chitosan solution pH 5.6 at 37oC for testing the antifungal activity. The after-inoculated suspension was spread on Sabouraud agar again to observe the viability of the fungal spore.

50 µl of bacterial broth culture [12] was added to each test tube, and the chitosan solution pH 5.6 was added with gradually increased of volume.

Contamination control test and test on effect of chitosan dissolving solvent were also conducted parallel with all the testing protocols. After loading all of the samples, all the test tubes were made vortex in 1 minute at 1000 rpm to ensure the well mixing.

Apples and bananas, purchased from the local market, were the subjects of the fruit testing models. Apples and bananas, after the transportation, were first washed with tap water, then with distilled water, and were sprayed with 70° alcohol and let dried naturally at ambient temperature.

Two experiments were conducted. The first experiment included two groups of testing. In one group, chitosan solution at dilute concentration in aerosol form was sprayed into the skin of fruits. The other group was the control (with no treatment) for checking the storage time.

The second experiment also included two groups of testing. One group was infected by the spore of Aspergillus niger suspension in aerosol form, while the other was blank. Both groups were covered by the chitosan film for checking the spoilage.

) and Table 1, the chitosan films were transparent and colorless. The average thickness of the film was 10 ± 1µm.

Characteristics of Chitosan Membrane from the 90% Deacetylated Chitosan 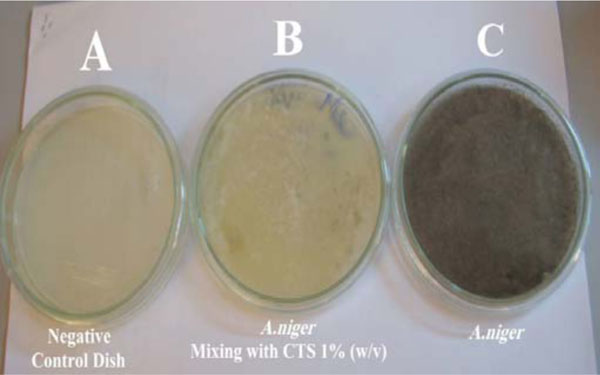 
In the form of broth, the MIC estimation was done for Staphylococcus aureus by testing in a series of test tubes as shown in the Fig. (3 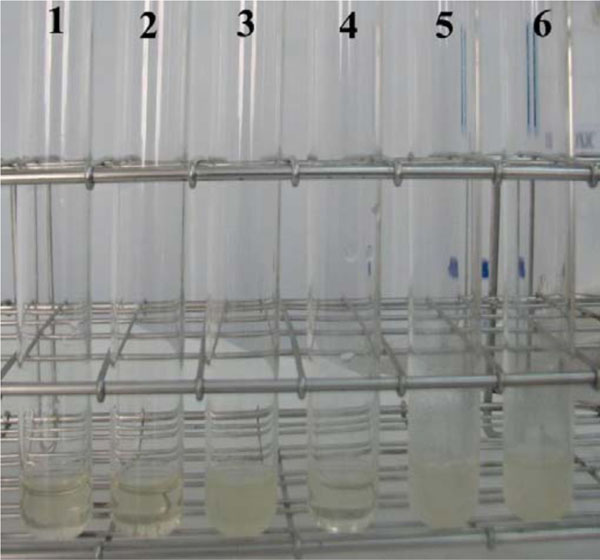 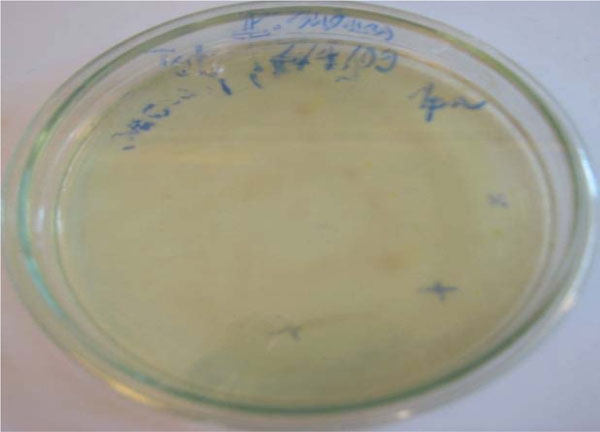 
Reportedly, chitosan causes extensive cell surface of microbes altered and covers the outer membrane with vesicular structures. Thus it can disrupt the properties of the outer membrane of the gram negative bacteria such as P. aeruginosa and S. aureus. 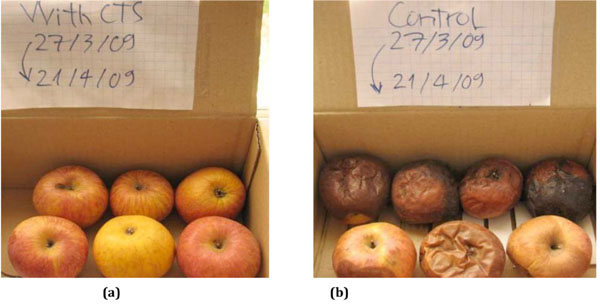 ) are showing a big difference in the fruit samples with and without the applications of chitosan solution. It can easily be seen that the bananas/ apples treated with chitosan solutions (Figs. 5a

) still look fresh and in a good shape after 4 days of storage at ambient temperature while the bananas/ apples untreated with chitosan solutions (Figs. 5b

) were infected with Pseudomonas aeruginosa and Staphylococcus aureus after 4 days of storage in the same condition. This also indicates that the prepared chitosan solutions have shown its strong inhibition on the presence, growth and development of some commonly mentioned food/fruits contaminating microbes.