Comparison of Three types of Tooth Brushes on Plaque and Gingival Indices: A Randomized Clinical Trial

This study is a single blind randomized trial with crossover design which involved 30 periodontaly healthy individuals. Professional plaque removal and oral hygiene instruction were performed for all the participants in the first step of our study followed by asking them to avoid brushing for 2 days. Thereafter plaque and gingivitis scores were measured using plaque and gingival indices (PI and GI). Then subjects were instructed to use Pulsar tooth brush for a two-week period and then, GI and PI indices were assessed again. After passing one-week period for wash out, subjects didn't brush for 2 days and indices were recorded again. The same procedure was done for CrossAction, and Butler 411 tooth brushes respectively and at the end of the study these variables were analyzed using SPSS software ver.16. Repeated measurement ANOVA test was used to compare the scores between different brushes.

Finding of this study reveals that using all three types of tooth brushes resulted in significant plaque and gingivitis reduction compared to baseline levels. Pulsar tooth brush was significantly more effective in diminishing PI and GI than Butler tooth brush (p=0.044 and 0.031 respectively).

According to our findings all 3 types of tooth brushes are effective in reduction of plaque and gingivitis and this reduction is significantly greater for Pulsar tooth brush compared to Butler and CrossAction tooth brushes.

An example of these ingenious products is Oral-B CrossAction tooth brush (Oral B®, Procter and Gamble Co., USA). This brush features bristles that attack plaque in tight space from the right angle (an optimal 18°) cleaning those areas better than straight bristles. Crisscross pattern of bristles have been positioned in opposing directions. These flexible and straightened bristles, actively penetrate between the teeth, where plaque builds up easily, and along the gum lines to lift it out and sweep it away. Soft gum stimulators, positioned on both sides of the brush head, gently massage the gum. Carefully polished end-round bristles are gentle on enamel and gum [7Cronin MJ, Dembling WZ, Low MA, Jacobs DM, Weber DA. A comparative clinical investigation of a novel tooth brush designed to enhance plaque removal efficacy. Am J Dent 2000; 13(Spec No): 21A-6A.
[PMID: 11763940] , 8Sharma NC, Qaqish JG, Galustians HJ, et al. A 3-month comparative investigation of the safety and efficacy of a new tooth brush: results from two independent clinical studies. Am J Dent 2000; 13(Spec No): 27A-32A.
[PMID: 11763941] ] (Fig. 1 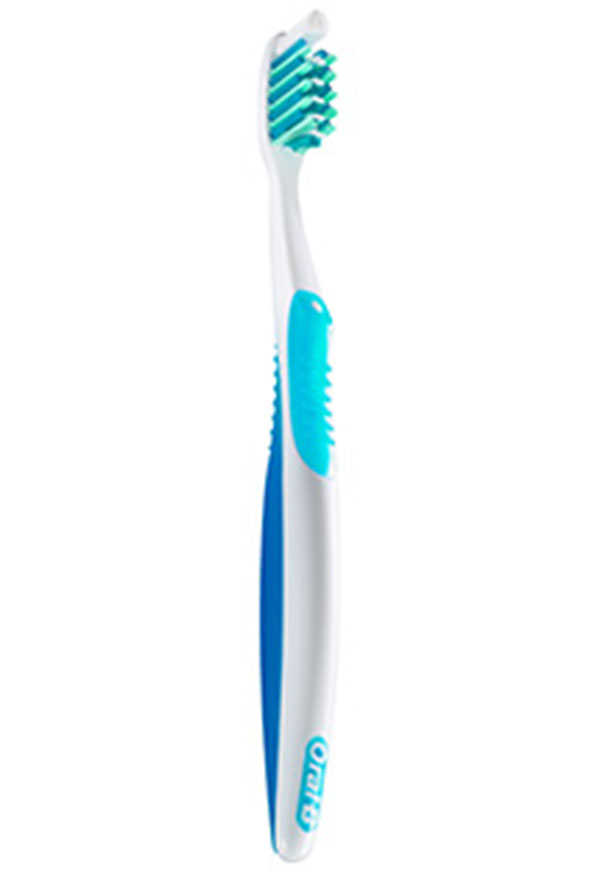 
Among significant characteristics of Oral-B® Pulsar™, as another paradigm of novel tooth brush, are pulsing by means of the battery in the handle and its bristles that pivot back and forth [8Sharma NC, Qaqish JG, Galustians HJ, et al. A 3-month comparative investigation of the safety and efficacy of a new tooth brush: results from two independent clinical studies. Am J Dent 2000; 13(Spec No): 27A-32A.
[PMID: 11763941] ]. Sensitive split head adjusts to the contours of teeth to clean hard-to-reach places while moderating the amount of pressure applies to teeth and gums [9Sharma NC, Galustians HJ, Qaqish J, Cugini M. Safety and plaque removal efficacy of a battery-operated power tooth brush and a manual tooth brush. Am J Dent 2001; 14(Spec No): 9B-12B.
[PMID: 12003486] , 10Warren P, Thompson M, Cugini M. Plaque removal efficacy of a novel manual tooth brush with MicroPulse bristles and an advanced split-head design. J Clin Dent 2007; 18(2): 49-54.
[PMID: 17508624] ] (Fig. 2 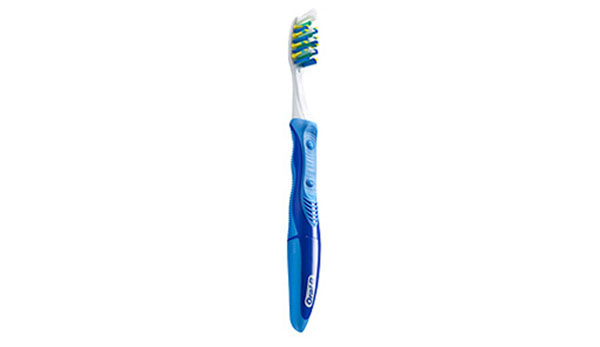 Despite the new-designed brushes, bristles tufts of Butler 411 (GUM®, Sunsatarinc., Chicago, USA) are all the same length and are positioned in three rows which are placed perpendicular to the handle. This is a soft, multi-tufted tooth brush with a head measuring 21 mm in length and 6.5 mm in width (Fig. 3 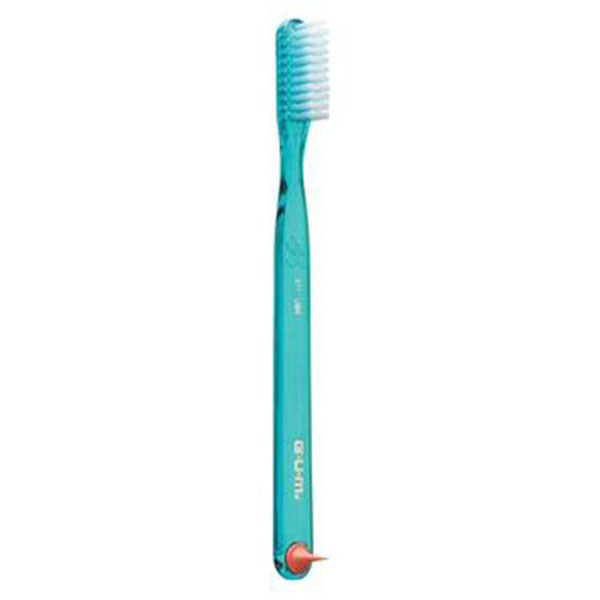 
Even though in recent years a large number of long-term studies about manual tooth brushes with a novel design have been conducted, their results have been somewhat inconclusive [11Jepsen S. The role of manual tooth brushes in effective plaque control: Advantages and limitations In: Lang NP, Attstrom R, Löe H, Eds. Proceedings of the European Workshop on Mechanical Plaque Control. Berne, Switzerland: Quintessence Publishing 1998; pp. 121-37.]. This incoordination may be because of various methods and designs of studies [6Cugini M, Warren PR. The Oral-B CrossAction manual tooth brush: A 5-year literature review. J Can Dent Assoc 2006; 72(4): 323.
[PMID: 16684475] ].

The aim of this study was clinical comparison of effect of three types of manual tooth brushes including CrossAction, Pulsar and Butler on plaque removal and gingivitis.

This study was a single blind randomized trial with crossover design which involved 30 periodontally healthy individuals.

All oral examinations were performed at periodontal department, Faculty of dentistry, Mashhad University of Medical Science, Iran. The study was approved by Ethical Committee and written informed consent was taken from all patients and volunteers who wanted to take part in our research. Also, the study protocol has been registered in the clinical trial.gov with this registration number: NCT02412358.

This clinical trial study was carried out on 30 volunteers among sixth-year-dental students (Male: 2, Female: 28, mean age: 23.5±0.7). The inclusion criteria were having at least five teeth in each quadrant; no partial denture; no orthodontic banding or retention wires; no oral lesions or sites with probing pockets depth ≥ 5 mm and routine use of a manual tooth brush. The individuals recruited for this study comprised those who did not have any systematic disease which would influence the course of periodontal diseases or the response to the treatment and also they were not smokers.

The patients were asked not to brush their teeth for 2 days and then their plaque and gingival indices were recorded and one brush (Pulsar brush, Oral B CrossAction or Butler 411) was given to them for consumption. They were asked to brush twice daily and two minutes for each time by Bass technique. After two weeks they were called and the plaque and gingival indices were recorded again. After a week as wash out period, again they were asked to refrain from brushing for 2 days after which their GI and PI were recorded. Second brush was administered and its two-weeks results were registered. This approach has been repeated for the third one and at the end GI and PI changes for each brush head were compared. The order of tooth brush types was determined randomly.

The mean and standard deviation were calculated for each data and analyzed using SPSS software Ver.16. Normal distribution of data was examined by means of Kolmogorov-Smirnov test. Repeated measurement ANOVA test was used to compare the scores between different brushes. To analyze the PI and GI score changes for each tooth brush Paired sample T- test was used.

Table 1
Comparison of mean PI score before and after treatment for each of brushes.

Table 2
Comparison of mean GI score before and after treatment for each of brushes.

This Crossover trial has been performed for a two weeks period on 30 dental students. Dental students were examined as the study group in order to eliminate the effect of elements which are related to motivation and behavior habits including dexterity, frequency and duration of tooth brushing. Also, crossover design was used to omit or reduce the interfering variables such as brushing manner and other factors like nutritional habits.

The result of this investigation revealed that Butler 411, CrossAction and Pulsar tooth brushes all appraised significant decrease in mean PI and GI scores (p-value <0.001). In addition, a significant difference between pulsar and butler tooth brush was demonstrated in PI and GI reduction (p-value 0.031, p-value 0.044 respectively).

Whereas, the result of Birang et al. demonstrated that there is no significant difference in plaque reduction between Pulsar, CrossAction and classic. In this study plaque index was recorded in two phases, before and after brushing with Bass technique for two minutes [23Jaber Yaghini RB, Amjadi MR, Ensiyeh Bateni EZ. Comparative evaluation of the efficacy of three tooth brush designs on Bass plaque control technique. J Isfahan Dental School 2011; 6(6): 597-605.].This active observation on the process of brushing may act as a contributing factor and is opposite of the definition of a proper tooth brush.

Moreover, due to our findings CrossAction does not show any nobility among mentioned tooth brushes which is parallel to the results of Cronin et al.’s research, in which no significant advantage was observed for CrossAction in compare to battery-powered Actibrush brush in terms of gingivitis reduction and plaque index [24Dörfer CE, von Bethlenfalvy ER, Pioch T, Galustians HJ, Qaqish J, Sharma NC. Clinical evaluation of the efficacy of a battery-powered tooth brush. results from two independent studies. Am J Dent 2001; 14(5): 273-7.
[PMID: 11803988] ]. This fact is in conflict with results of studies such as Sharma et al., William et al. and Huan et al. all of which have shown superior plaque removal by the Oral-B CrossAction brush relative to other manual tooth brushes [25Sharma NC, Qaqish JG, Galustians HJ, et al. An advanced tooth brush with improved plaque removal efficacy. Am J Dent 2000; 13(Spec No): 15A-9A.
[PMID: 11763939] -27Williams K, Haun J, Dockter K, Ferrante A, Bartizek RD, Biesbrock AR. Plaque removal efficacy of a prototype power tooth brush compared to a positive control manual tooth brush. Am J Dent 2003; 16(4): 223-7.
[PMID: 14579873] ]. Sharma et al. reevaluated their patients after 3 months but in the present study the indices were recorded after two weeks. This might be one of the reasons that justify the mentioned difference between two studies.

It is worth noting that as the samples of our study were all dental students with great oral hygiene consideration, they may not respect the protocol of the study not to brush for 2 days before using each tooth brush. Besides, pulsar tooth brush was the first brush prescribed. These may be the reasons of why there is no significant difference between Butler and CrossAction.

Mechanical plaque control is the most important step in the prevention of periodontal diseases. The present study showed that the plaque and gingival indices will significantly decrease after brushing with each of tooth brush types: CrossAction, Pulsar, and Butler 411. However, those indices were diminished further after brushing with the Pulsar tooth brush.