The extraction of lower wisdom teeth is often performed under general anesthesia in patients with intellectual disabilities. However, the choice of analgesics has not yet been investigated.

To analyze the use of analgesics during general anesthesia for extraction including lower wisdom teeth in patients with intellectual disabilities.

This research is a retrospective observational study. The study population was composed of all patients presenting for extraction of lower wisdom teeth under ambulatory general anesthesia in the clinic of Special Needs Dentistry in Okayama University Hospital from April 2011 to March 2016. The distribution of the combination of analgesics and the relationship between the use of analgesics and the type of extraction were investigated.

One hundred and twelve cases were enrolled in this study. Intravenous injections of flurbiprofen, acetaminophen and betamethasone were used in 96 (85.7%), 12 (10.7%) and 26 cases (23.2%), respectively. Flurbiprofen is a non-steroid anti-inflammatory drugs (NSAIDs). Acetaminophen is an old analgesic, but an injection of acetaminophen is new, which was released in 2013 in Japan. And betamethasone is not an analgesic, but a steroid. Betamethasone was used in combination with other analgesics, and was used at a higher dose in a case in which four wisdom teeth were extracted.

Flurbiprofen was the main analgesic used for extraction of wisdom teeth under general anesthesia in patients with intellectual disabilities. Betamethasone was used to support flurbiprofen or acetaminophen for extractions of multiple wisdom teeth, with the aim of controlling swelling rather than relieving pain.

The analgesics currently available for intravenous administration are opioids, non-steroidal anti-inflammatory drugs (NSAIDs) and acetaminophen, as well as steroids to control swelling after teeth extraction [4Kim K, Brar P, Jakubowski J, Kaltman S, Lopez E. The use of corticosteroids and nonsteroidal antiinflammatory medication for the management of pain and inflammation after third molar surgery: A review of the literature. Oral Surg Oral Med Oral Pathol Oral Radiol Endod 2009; 107(5): 630-40.
[http://dx.doi.org/10.1016/j.tripleo.2008.11.005] [PMID: 19157919] ]. As a suppository, opioids and NSAIDs are available. Although it is accepted that these analgesics can be used as pain management for the extraction of impacted teeth under general anesthesia, their use has never been investigated. We therefore investigated the use of the intravenous analgesia in a retrospective study.

To address the research purpose, the investigators implemented a retrospective observational study. The study population was composed of all patients presenting for extraction of lower wisdom teeth under ambulatory general anesthesia in the clinic of Special Needs Dentistry in Okayama University Hospital from April 2011 to March 2016. To be included in the study sample, general anesthesia with tracheal intubation had to be maintained with remifentanil. Patients were excluded as study subjects if hospitalization was planned.

Data were collected from the clinical records of eligible patients. Patient information was de-identified and stored appropriately. This study was approved by the Ethics Committee, Okayama University Graduate School of Medicine, Dentistry and Pharmaceutical Sciences.

General anesthesia was initiated with insertion of an intravenous line. In cases in which an intravenous line was difficult to place, midazolam was given orally or sevoflurane was inhaled as induction, and occasionally both were used, followed by insertion of an intravenous line. Remifentanil started at 0.25 µg/kg/min, and propofol was continuously infused as a target-controlled infusion (TCI) with the target concentration initially set at 4.0 µg/ml. In patients with multiple drug allergies, sevoflurane was used instead of propofol. After loss of consciousness, Rocuronium was injected to obtain muscle relaxation, and an endotracheal tube was inserted through the nasal cavity.

Patients were continuously monitored with electrocardiography, blood pressure, SpO2, bispectral index (BIS) monitoring, and partial pressure of CO2 in an anesthetic circuit. Body temperature was measured every 30 min. After intubation, the infusion rate of remifentanil was reduced to 0.10 - 0.20 µg/kg/min. During treatment, the BIS value was maintained between 40 and 50 by adjusting the target concentration of propofol, or the concentration of sevoflurane, as described in a previous report [5Katoh T, Suzuki A, Ikeda K. Electroencephalographic derivatives as a tool for predicting the depth of sedation and anesthesia induced by sevoflurane. Anesthesiology 1998; 88(3): 642-50.
[http://dx.doi.org/10.1097/00000542-199803000-00014] [PMID: 9523807] ]. Systemic blood pressure was maintained at no less than 80 mmHg. Prior to extraction of the teeth, local anesthetic containing 2% lidocaine and 1:80,000 adrenaline was used. During treatment, analgesics and/or steroids were used. After treatment, anesthetic infusion was terminated and the effect of the muscle relaxant was reversed with sugammadex if necessary. The endotracheal tube was removed when spontaneous breathing and consciousness was regained. We judged the patients’ recovery state using a post-anesthetic discharge scoring system [6Chung F, Chan VW, Ong D. A post-anesthetic discharge scoring system for home readiness after ambulatory surgery. J Clin Anesth 1995; 7(6): 500-6.
[http://dx.doi.org/10.1016/0952-8180(95)00130-A] [PMID: 8534468] ] to estimate activity, vital signs, water intake, pain, and bleeding. Patients were permitted to be discharged when these factors had returned to the same level as on admission.

The intravenous analgesic agents used are shown in (Fig. 1 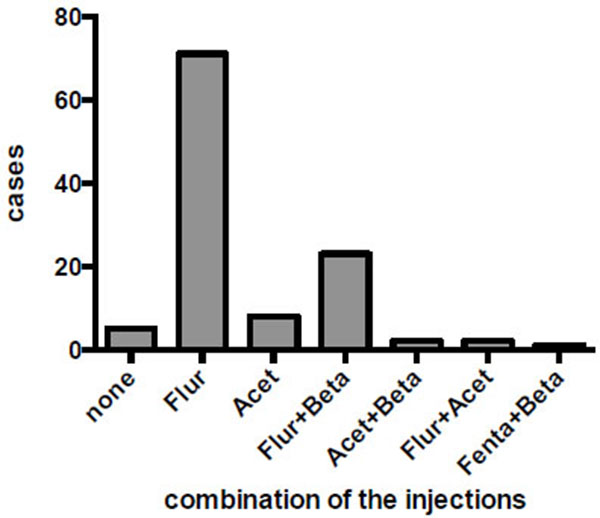 
Betamethasone was used in 80% of type 4 cases, involving extraction of upper and lower wisdom teeth on both sides, but in less than 25% of type 1, 2 and 3 cases. There was a significant difference in the usage of betamethasone between different types of extraction (Table 2).

Table 2
Number of cases (%), in which the injections were used.

In this study, flurbiprofen was used in 96 out of 112 cases, indicating that it plays a major role in pain management after extraction of wisdom teeth under general anesthesia in patients with intellectual disabilities in our facility. The effectiveness of flurbiprofen or NSAIDs in acute postoperative pain has been demonstrated by a previous systematic review paper [7Hyllested M, Jones S, Pedersen JL, Kehlet H. Comparative effect of paracetamol, NSAIDs or their combination in postoperative pain management: A qualitative review. Br J Anaesth 2002; 88(2): 199-214.
[http://dx.doi.org/10.1093/bja/88.2.199] [PMID: 11878654] , 8Sultan A, McQuay HJ, Moore RA, Derry S. Single dose oral flurbiprofen for acute postoperative pain in adults. Cochrane Data Systemat Rev 2009; (3): CD007358.
[http://dx.doi.org/10.1002/14651858.CD007358.pub2] [PMID: 19588427] ], and our results are consistent with this.

Acetaminophen has been demonstrated to provide a statistically significant benefit when compared with placebo for pain relief and pain intensity without statistically significant difference in adverse events in meta-analysis. In addition, acetaminophen acts through TRPA1, a family of transient receptor potential ion channels, and inactivates voltage-gated calcium channel (VGCC) in the central terminals of primary sensory neurons in the dorsal horn [12Andersson DA, Gentry C, Alenmyr L, et al. TRPA1 mediates spinal antinociception induced by acetaminophen and the cannabinoid Δ(9)-tetrahydrocannabiorcol. Nat Commun 2011; 2: 551.
[http://dx.doi.org/10.1038/ncomms1559] [PMID: 22109525] ], indicating that the mechanism of action of acetaminophen is totally different from that of NSAIDs. Therefore, a combination of acetaminophen and NSAIDs has been considered to confer additional analgesic efficacy compared with alone in an internal use [7Hyllested M, Jones S, Pedersen JL, Kehlet H. Comparative effect of paracetamol, NSAIDs or their combination in postoperative pain management: A qualitative review. Br J Anaesth 2002; 88(2): 199-214.
[http://dx.doi.org/10.1093/bja/88.2.199] [PMID: 11878654] ]. Then, a combination of injection of NSAIDs and acetaminophen are considered to be also effective against teeth extraction under general anesthesia. In this study, acetaminophen was used only in 8 cases. However, it should have been used more cases since it is not easy for a part of patients in this study to inform suffering from pain and take medicines because of intellectual disabilities.

Moreover, addition of betamethasone to the injections of flurbiprofen and acetaminophen may provide ideal pain and swelling management in the extraction of impacted wisdom teeth under general anesthesia. As described above, action mechanisms of flurbiprofen and acetaminophen is different from each other, and betamethasone reduces other complications, such as swelling and trismus with other mechanisms of action. Besides, administration of analgesics during general anesthesia is intended to provide preemptive analgesia to effectively control pain after extraction of impacted teeth [13Kaufman E, Epstein JB, Gorsky M, Jackson DL, Kadari A. Preemptive analgesia and local anesthesia as a supplement to general anesthesia: A review. Anesth Prog 2005; 52(1): 29-38.
[http://dx.doi.org/10.2344/0003-3006(2005)52[29:PAALAA]2.0.CO;2] [PMID: 15859447] , 14Sener M, Ozgur Pektas Z, Yilmaz I, et al. Comparison of preemptive analgesic effects of a single dose of nonopioid analgesics for pain management after ambulatory surgery: A prospective, randomized, single-blind study in Turkish patients. Curr Ther Res Clin Exp 2005; 66(6): 541-51.
[http://dx.doi.org/10.1016/j.curtheres.2005.12.001] [PMID: 24678075] ]. Especially, acetaminophen injection is also known to be effective in controlling postoperative pain when used for preemptive analgesia [15De Oliveira GS Jr, Castro-Alves LJ, McCarthy RJ. Single-dose systemic acetaminophen to prevent postoperative pain: A meta-analysis of randomized controlled trials. Clin J Pain 2015; 31(1): 86-93.
[http://dx.doi.org/10.1097/AJP.0000000000000081] [PMID: 25485955] , 16Arici S, Gurbet A, Türker G, Yavaşcaoğlu B, Sahin S. Preemptive analgesic effects of intravenous paracetamol in total abdominal hysterectomy. Agri 2009; 21(2): 54-61.
[PMID: 19562533] ]. Thus, administration of injections of flurbiprofen, acetaminophen and betamethasone bring strong management for pain and other symptoms with minimum side effects for extraction of impacted third molars under general anesthesia.

Fentanyl was used only in one patient, who has allergy for multiple medicines. Opioid seems not to be preferably used for pain management after the extractions because of side effect, such as nausea and headache. In five cases in our study, no analgesic was administered as pain management, with no specific reason documented. Since it is not easy for a part of patients with intellectual disability to inform family members and/or caregivers of their pain and to take medicines of pain management, preemptive analgesia is strongly recommended in all these cases during treatment under general anesthesia. However, injections of all flurbiprofen, acetaminophen and betamethasone are not necessary for all cases of teeth extraction. Then, suitable combination of injections to each case is expected to shown in future clinical studies.

Flurbiprofen was the main analgesic used for the extraction of wisdom teeth under general anesthesia in patients with intellectual disabilities. Betamethasone was used to support flurbiprofen or acetaminophen, with the aim of controlling swelling rather than relieving pain.

The authors confirm that this article contents have no conflict of interest.