Oxidative stress is a pathologic event induced by a prevalence of oxidant agents on the antioxidant ones, with a consequent alteration of oxide-reducing balance.

Freeradicals produce damages both in cellular and extra-cellular components; phospholipid membranes, proteins, mitochondrial and nuclear DNA, are the target of the oxidative stress, that can finally cause cellular death due to apoptosis.

Orthodontic appliances such as brackets, wires, resins and soldering have some components that can be considered as potential allergen, carcinogenic, cytotoxic and gene mutation factors. The primary aim of this research is to evaluate oxidative stress in the saliva of patients treated with multibracket self-ligating vestibular orthodontic appliances; the secondary purpose is to investigate the influence of orthodontic multibracket therapy on oral hygiene and the consequent effect on oxidative stress. Salivary specimens has been collected in a sample of 23 patients were enrolled (12 Female, 11 Male) between 12 and 16 years of age (mean age 14.2). For each patient has been collected a salivary specimen at the following time points; before orthodontic bonding (T1), five weeks (T2) and ten weeks (T3) after orthodontic appliance bonding.

Samples has been analysed with a photometer due to SAT Test (Salivary Antioxidant Test). Data obtained show a mean of 2971 mEq/l of anti-oxidant agents before orthodontic treatment, and after five weeks from the bonding the mean was decreased to 2909 mEq/l, instead at ten weeks was increased to 3332 mEq/l. Repeated measures ANOVA did not reveal statistically significant differences between the time points (P = 0.1697). The study did not reveal any correlation between the level of dental hygiene and that of oxidative stress (Pearson Correlation Coefficient R = 0).

Orthodontic treatment with multibrackets vestibular metallic appliance seems to be not able to affect oxidative stress during the first ten weeks of therapy.

In recent years, clinical and experimental medicine has shown great interest in oxidative stress as a trigger event for several human diseases. Oxidative stress is a pathologic asymptomatic event, highly detrimental to tissues and cells, induced by a prevalence of oxidizing agents over antioxidant ones, with a consequent alteration of oxidation/reduction balance. A free radical is a highly reactive chemical species, characterized by an unpaired electron in its external orbital; this electron allows linkage to other radicals or the snatching of one electron from adjacent molecules [1Halliwell B, Gutteridge JM. Free radicals in biology and medicine 3rd edition. Oxford University Press 1999.]. This event produces the oxidation of the adjacent molecule with important damage to its structure and functions: free radicals can produce detrimental effects on cellular proteins, creating modified amino acids, and on nucleic acids, especially the mitochondrial ones, creating alternative nitrogen bases. These can produce a chain-reaction effect. In human beings, free radicals are generated by exposure to UV, X- and gamma rays and can also be produced by leukocytes and macrophages during inflammatory processes. Free radicals are characterized by a short lifetime; however, some species, such as molecular oxygen, persist for a long time. From a biological and pathological point of view, the most important free radicals are the reactive oxygen species (ROS); the ratio between ROS and antioxidant molecules defines the oxide-reducing balance, which is one of the most important factors, after genetic ones, in the determination of lifespan and quality of life [2Cadenas E. Biochemistry of oxygen toxicity. Annu Rev Biochem 1989; 58: 79-110.
[http://dx.doi.org/10.1146/annurev.bi.58.070189.000455] [PMID: 2673022] ]. Among the free radicals generated in the human organism, the following must be considered:

Hydrogen Peroxide (H2O2) is considered a relatively weak free radical and is produced in all systems that generate superoxide anion.

Hypo chloric Acid (HOCl) can be neutralized to water (H2O) or metabolized by the myeloperoxidase enzyme and transformed into a strong oxidizing agent. This reaction is considered highly relevant in the inflammatory process, because the myeloperoxidase protein is one of the most represented proteins in the phagocytes [4Cohen AB, Chenoweth DE, Hugli TE. The release of elastase, myeloperoxidase, and lysozyme from human alveolar macrophages. Am Rev Respir Dis 1982; 126(2): 241-7.
[PMID: 6285785] ].

Hydroxyl Radical (OH*) is considered the most active free radical. In competition with H2O2, it inactivates mitochondrial enzymes and causes direct damage to DNA.

For the present study, 23 patients were enrolled (12 Female, 11 Male) between 12 and 16 years of age (mean age 14.2); vestibular self-ligating brackets (Smart Clip, 3M-Unitek) with MBTTM prescription and Thermal Ni-Ti wires 0.014 Inch, Ortho-form II (Nitinol Heat Activated 3M-Unitek) were used. For each patient, approval was obtained to perform orthodontic therapy, and informed consent was given by a parent or guardian for the collection of salivary samples. The study has been approved by the Ethics Committee. The following inclusion criteria were used in the study:

For each patient, a salivary sample was collected at different time points:

For each patient, dental hygiene was evaluated before the collection of the salivary sample, using the Silness-Loe Plaque Index (PI) [22Silness J, Loe H. Periodontal Disease In Pregnancy. Correlation Between Oral Hygiene And Periodontal Condition. Acta Odontol Scand 1964; 22: 121-35.
[http://dx.doi.org/10.1067/mpr.2001.117056] [PMID: 11514810] ]. The PI is used together with the Gingival Index (GI), and is either used on all teeth (28 teeth, so wisdom teeth are excluded) or selected teeth. There is no substitution for any missing tooth. The PI is either used on all surfaces (M, O, D, L) or selected surfaces (M, O, L). This index measures the thickness of plaque on the gingival one third with the following scores:

1 = A film of plaque adhering to the free gingival margin and adjacent area of the tooth. The plaque may be seen in situ only after application of a disclosing solution or by using the probe on the tooth’s surface.

2 = Moderate accumulation of soft deposits within the gingival pocket or the tooth and gingival margin, which can be seen with the naked eye.

3 = Abundance of soft matter within the gingival pocket and/or on the tooth and gingival margin.

The BAP (Biological Antioxidant Potential) test measures the efficiency of a plasmatic antioxidant barrier in terms of Fe-reduction activity. The SAT test is based on the capacity of a colored solution of Fe3+ to modify its coloring when Fe3+ has been reduced to Fe2+ due to the action of a reducing agent. A salivary sample was collected from fasting patients after at least 30 min from daily dental hygiene; in fact, foods and beverages such as coffee, tea, and fruit juice or the use of toothpaste can produce an alteration in anti-oxidant agents in the saliva. Before each sample, a small plastic glass and a square of cotton were weighed, taking note of the values registered. Patients were instructed to twirl the cotton in their mouth without biting, simulating chewing, in order to produce saliva. After 60 s, the small glass and cotton square were re-weighed, paying attention that the difference between the two measurements was in the range of 1.1 to 1.4 g.

This range corresponds to the optimal salivary fluid expressed in ml/min, in order to obtain the maximum antioxidant effect and a constant amount of uric acid (principal antioxidant salivary agent). The cotton was wrung out by hand in order to collect the salivary sample in the small glass; in a cuvette containing the R1 reagent, 30 μl of the R2 reagent was added using a designated pipette and single-use tip. The cuvette was closed, shaken for 10 s and then inserted into the reading camera of the apparatus for the first reading. At a later time, the cuvette was removed and 10 μl of saliva was added to the solution containing R1 + R2; the cuvette was closed one more time, shaken, and inserted again into the reading camera. The reference values for the SAT test are expressed in mEq/L of antioxidant agents.

For the study, 69 salivary samples have been collected; three for each patient enrolled; SAT test results were analyzed statistically by the analysis of variance (ANOVA) for repeated measures. PI values were analyzed by chi-square test. Statistical significance was set to α = 0.05. The software used for the statistical analysis was PRISM 6 (GraphPad Software, California, USA).

The results of the SAT test are reported graphically in Fig. (1 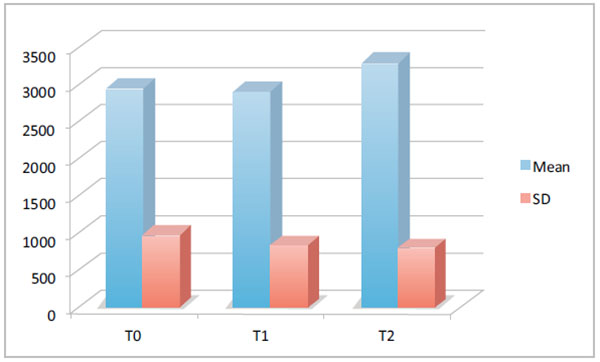 ) and the descriptive statistic of the data is reported in Table 1. Repeated measures ANOVA did not reveal statistically significant differences between the time points (P = 0.1697).

The results of the present study revealed a mean value of anti-oxidant agents in the saliva of patients before the treatment of 2954 mEq/l. Five weeks after bonding, the mean value reduced to 2903 mEq/l, instead 10 weeks after the beginning of the treatment, the mean concentration of antioxidant agents in the saliva increased to the extent of 3297 mEq/l. However statistical analysis did not reveal significant differences in the mean values of anti-oxidant agents among T0, T1, and T2. The distribution of the PI value in the study group, measured by the Silness-Loe gingival method, is reported in Table 2. The distribution of the scores at the different time points is expressed graphically in Fig. (2 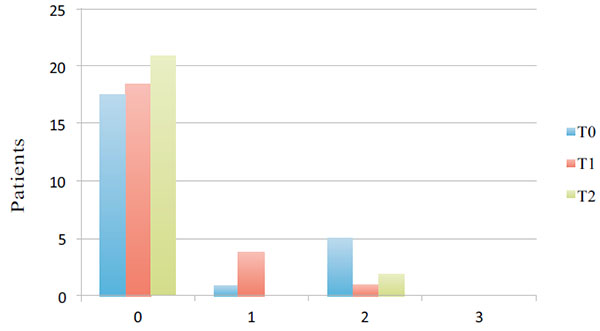 ). Statistical analysis performed by chi-square test did not reveal statistically significant differences between the groups (P > 0.05).

Table 2
Distribution of plaque index value in patients at the different time point.

The results show that no patients had a PI value of 3 (Abondance of soft matter within the gingival pocket and/or on the tooth and gingival margin) at any time point. Patients with the scores of 0 maintained good oral hygiene at the following measurements: in the majority of patients with higher scores, the measurements at T1 and T2 were better; in some cases, the value remained the same. Considering worsening of dental hygiene during orthodontic treatment, the study did not reveal any correlation between the level of dental hygiene and that of oxidative stress (Pearson Correlation Coefficient R = 0). In the below table Table 3, the correlation between PI scores and SAT results is illustrated.

In conclusion, it is possible to state that orthodontic multi-bracket therapy did not influence the oxidative stress in the oral cavity during the first 10 weeks of treatment; these data could also be related to the use of a self-ligating vestibular appliance, which reduces the forces exerted on the teeth and allows for better dental hygiene during orthodontic treatment.