The purpose of this study was to present early and adult cases of anterior open bite that were treated efficiently using different treatment approaches and mechanics.

Five patients of different age groups (from 7 to 27 years), suffering from a clear Anterior open bite deformity, were properly diagnosed and relevant treatment modality for each was selected.

Positive overbite was efficiently achieved for all patients.

Early orthodontic treatment is becoming more generally accepted as a means of gaining the greatest possible control over mal-growing dentofacial components including anterior open bite. However, in most cases, a second phase of treatment may be necessary to detail the occlusion and maintain life-long occlusal stability; while in others camouflage or even orthognathic surgery is recommended if standard outcome of facial esthetics and oral function are to be achieved.

Speidel et al. [1Speidel TM, Isaacson RJ, Worms FW. Tongue-thrust therapy and anterior dental open-bite. A review of new facial growth data. Am J Orthod 1972; 62(3): 287-95.
[http://dx.doi.org/10.1016/S0002-9416(72)90267-9] [PMID: 4559002] ] in a review of the etiology, diagnosis and treatment of anterior open bite, stated that due to the complexity of etiologic factors of anterior open bite, each individual case requires careful and thorough examination to formulate a proper diagnosis and treatment plan for that patient. In a recent study on Italian preschool children, Silvestrini-Biavati et al. [2Silvestrini-Biavati A, Salamone S, Silvestrini-Biavati F, Agostino P, Ugolini A. Anterior open-bite and sucking habits in Italian preschool children. Eur J Paediatr Dent 2016; 17(1): 43-6.
[PMID: 26949238] ] pointed out the fact that non-nutritive sucking habits are essential etiologic factor of developing anterior open bite in deciduous dentition in addition to type of feeding. Gianelly [3Gianelly AA. One-phase vs two-phase treatment. Am J Orthod Dentofacial Orthop 1995; 108(5): 556-9.
[http://dx.doi.org/10.1016/S0889-5406(95)70057-9] [PMID: 7484976] ] concluded that 90% of all growing patients can be treated successfully in one-phase protocol if treatment was started in the late mixed dentition. However, the pause between phase I and phase II encountered certain degree of relapse and this led to long-term retention protocol.

Pinkham et al. [4Pinkham JR, Cassamessimo PS, Fields HJ, Mctique DJ, Nowak AJ. Pediatric Dentistry: Infancy through Adolescence 3rd ed. 1999.] studied the atypical swallowing habits and the role of the tongue malfunction or tongue–thrusting habit in causing disruption of equilibrium of forces between oral and perioral musculature. They concluded that this imbalance may impede eruption of individual or segments of the dentition and consequently causes anterior open bite. However, Proffit and Mason [5Proffit WR, Mason RM. Myofunctional therapy for tongue-thrusting: Background and recommendations. J Am Dent Assoc 1975; 90(2): 403-11.
[http://dx.doi.org/10.14219/jada.archive.1975.0075] [PMID: 1053783] ] considered that tongue-thrust habit may be able to sustain open bite but not create it.

McNamara and Brudon [6McNamara JA, Brudon WL. Orthodontics and dentofacial orthopedics 2001.], and Subtelny [7Subtelny JD. Early Orthodontic Treatment 2000.] among others reported that if etiologic factors could be recognized and treated early, then it might be possible to minimize or even eliminate most of the developing dentoalveolar deformities.

In another study, NG et al. [9 NG CST. Wong RWK, Hagg U. Orthodontic treatment of anterior open bite. Intern J Pediat Dent 2007; pp. 78-83], addressed the major challenge a clinician encounters when treating anterior open bite which is the patient’s concern about oral function and facial esthetics. They have discussed the non-surgical treatment options of anterior open bite (preventive, interceptive and camouflage) and pointed out to the fact that orthognathic surgery may be the only effective and stable approach left for adult skeletal open bite.

Ballanti et al. [10Ballanti F, Franchi L, Cozza P. Transverse dentoskeletal features of anterior open bite in the mixed dentition. Angle Orthod 2009; 79(4): 615-20.
[http://dx.doi.org/10.2319/071808-375.1] [PMID: 19537868] ] evaluated the Dentoskeletal features of subjects with AOB in the mixed dentition using both conventional cephalometric analysis and morphometric analysis applied to PA films. Their results exhibited significant shape differences in craniofacial configuration mainly as transverse contraction of the zygomatic region of the maxilla (both skeletal and dentoalveolar) and of the mandible at the condylar and gonial levels. The mandible also showed tendency toward vertical elongation (hyperdivergent) in AOB subjects when compared to control group of normal overbite.

The purpose of this clinical study was to present early and adult cases of anterior open bite which were treated efficiently using different treatment approaches and mechanics.

The parents’ and patient’s chief complaint was the anterior open bite and facial disharmony.

His medical history was good and free from any relevant health problems.

In view of the pretreatment records and clinical examination, interceptive orthodontics treatment was recommended using removable Hawley appliance with screening device and habit breaker as shown in Fig. (1


Phase I early treatment was successful and further follow up confirmed parents’ and patient’s satisfaction. A retention protocol was established to maintain future stability (Fig. 2 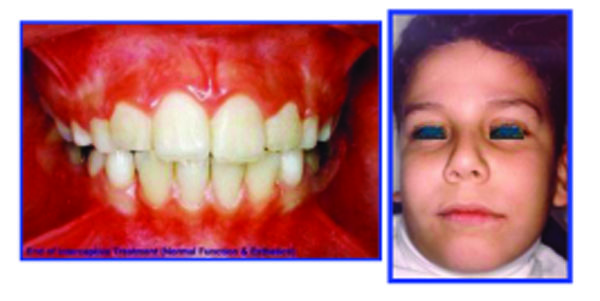 Extra-oral examination: The patient had a rounded, symmetric face with incompetent lips where the lower lip is tucked behind the maxillary incisors forcing them labially and the mandibular incisors lingually (Fig. 3

). Her past medical history was free from any health problem. 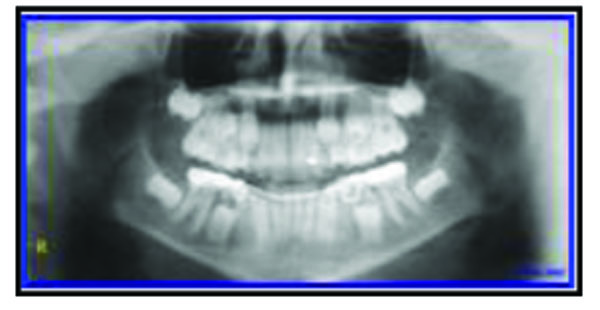 
The patient's chief complaint was a lack of incising ability with anterior teeth and abnormal lip seal. 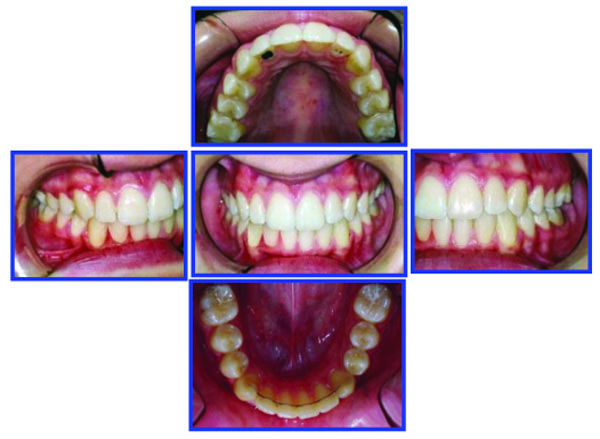 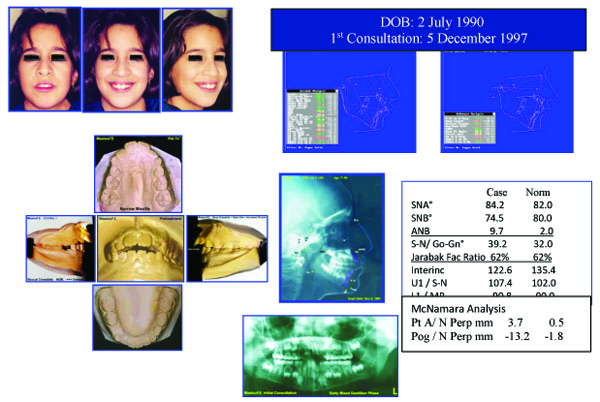 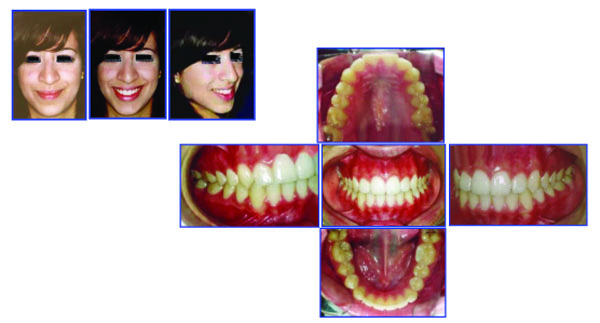 In addition to radiographic examination (Fig. 19


The patient was treated with presurgical alignment and postsurgical treatment and evaluated with cephalometric analysis to improve the treatment (Figs. 20 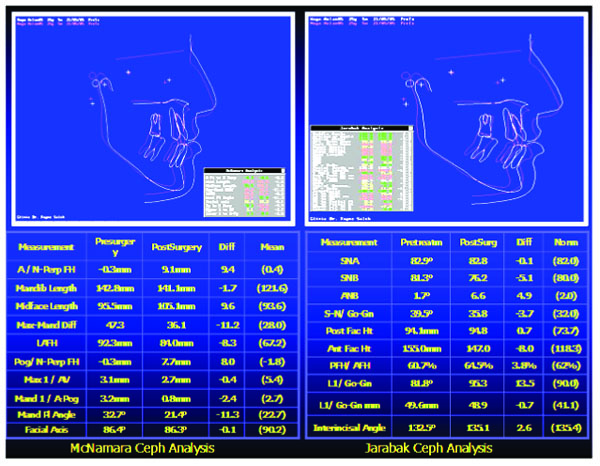 The skeletal and dentoalveolar complexities of the case necessitated a combined consultation and treatment planning with the maxillofacial surgeon. To restore normal facial esthetics and occlusion; the following schedule was agreed upon:

In the light of the above report, the following conclusions can be drawn:

The study was approved by the ethical committee of College of Dentistry, University of Babylon, Hilla, Babylon, Iraq, in accordance with the Declaration of Helsinki.

The reported experiments in accordance with the ethical standards of the committee responsible for human experimentation (institutional and national), and with the Helsinki Declaration of 1975, as revised in 2008 (http://www.wma.net/en/20activities/10ethics/10helsinki/).