Fig. (1) A. The root apices were cut off and the tooth embedded in clear acrylic up to the amelo-cemental junction. B. A diamond bur was used to reduce cusps to create a flat occlusal plane just into dentine. C. Using the same diamond bur, a preliminary cavity was cut into dentine, but not extending more than 1.5 mm from the occlusal plane. A large Cerana diamond bur (Class1 type), height 3mm;top diameter 4mm;bottom diameter 3mm was used to enlarge the initial cavity. At this stage the depth of the cavity was under prepared. D. The teeth were then sectioned through the prepared cavity, 1 mm off-centre, along the mesio-distal plane. All remaining remnants of pulp tissue were removed by washing the cavity for five minutes with 5% sodium hypochlorite and flushing out with distilled water. E. A standard cavity with a RDT of approximately 0.5mm was created using the Cerana bur. The depth of the cavity was then standardised to be 2mm deep by further reduction of the flat occlusal pale. F. Both sections of each tooth were photographed using an image analysis system and the average RDT was calculated from 5 randomly selected sites per section. Using a tungsten carbide bur, a groove in one root was prepared to receive the leads of the TC which were glued to the dentin of the roof exactly in the midline of the cavity, in the larger of the two sections. The pulp chamber was injected with ECG gel. 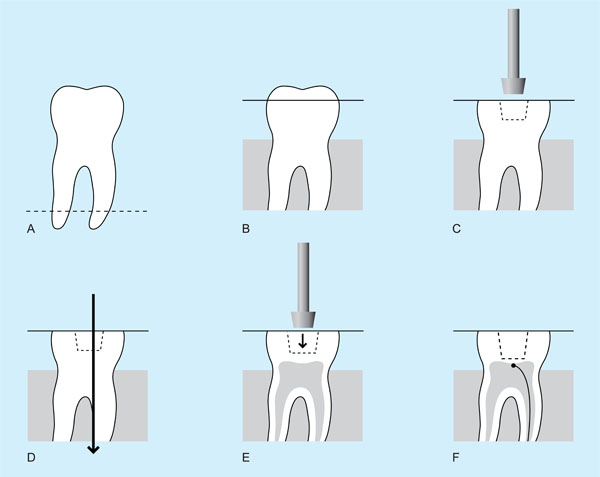