The molecular mechanisms of growth suppression by retinoic acid (RA) were examined. Our results suggest that the cytostatic effects of RA could be mediated by the activation of endogenous CBR3 gene in oral squamous cell carcinomas (OSCCs), and the expression is a potential marker for oral malignancy.

In this study, we investigated the effects of retinoic acid on the expressions of a wide variety of genes, and evaluated it as a mediator for the suppression of transformed phenotypes for oral squamous cell carcinoma (OSCC) cells.

In addition to OSCCs, hyperplastic and mildly, moderately and severely dysplastic tissues were included in this study. These tissue samples had been surgically resected in the Dental Hospital of Hokkaido University from February 1998 to April 2004. Each sample was macrodissected, and the stromal tissues were carefully removed as well as possible by a pathologist, then stored at -100 oC. Clinico-pathological features of OSCCs used in two sets of experiments are listed in Tables 2 and 3, respectively. All procedures were undertaken following informed consent from each patient, and adhered to the ethical guidelines of the Dental Hospital of the Hokkaido University School of Dentistry (Sapporo, Japan).

Effects of 9-cis-RA on the Gene Expression in Ca9-22 Cells.

cDNA microarray analysis was performed using IntelliGene HS Human expression chips containing ~ 16,600 probe sets (Takara). Briefly, 4 µg of total RNA was used for double-stranded cDNA probe synthesis with a T7 oligo (dT) primer. Each cDNA fragment was subjected to RT amplification that incorporated aminoalyl-UTP (Ambion), which was coupled with either Cy3 or Cy5 (Amersham Biosciences). After purification through a Microcon 30 spin column (Millipore), the amplified RNAs were combined and hybridized to the IntelliGene HS Human expression chips in hybridization buffer containing Cot-1 DNA (Invitrogen). Each slide contained duplicate sets of samples and Cy3 /Cy5 labeling of the cDNA probes was reversed in duplicate experiments. After overnight hybridization at 70 (C, the slides were washed, scanned for Cy3 and Cy5 fluorescence using a ScanArray Express microarray reader (Perkin-Elmer) and the signal was quantified using ScanArray Express software (Perkin-Elmer).

To validate the microarray analysis, we performed Quantitative RT-PCR [11Johst U, Betsch A, Wiskirchen J, et al. All-trans and 9-cis retinoid acids inhibit proliferation migration and synthesis of extracellular matrix of human vascular smooth muscle cells by inducing differentiation in vitro J Cardiovasc Pharmacol 2003; 41(4): 526-35.] in the cell lines and the tissue samples. Total RNA isolates (2μg) were reverse-transcribed using oligo (dT)12-18 primers and Superscript II (Invitrogen). Oligo primers for RT-PCR were designed by Primer Express software (Applied Biosystems) and are listed in Table 1. Each PCR amplification was carried out in triplicate in an ABI Prism 5700 Sequence Detection System using Sybr Green Mastermix (Applied Biosystems) for 15 min at 95 (C for the initial denaturing, followed by 40 cycles of 95 (C for 30 sec and 60 (C for 1 min. The expression values for each gene were normalized to the expression levels of the S5 ribosomal protein transcript (Genbank accession No, NM 001009 ; primer pairs, 5’- GAG CGC CTC ACT AAC TCC ATG ATG A –3’ and 5’- CAC TGT TGA TGA TGG CGT TCA CCA –3’), which was used as an internal control. Statistical analysis was performed using Welche’s t-test.

The migration potential of cells was determined by a wound-healing assay. Cells were grown on fibronectin-coated culture dishes to confluence. A wound was made in the middle of the culture dish using pipet chips. Cells were photo-micrographed at the indicated times.

Statistical significance of differential CBR3 mRNA expression between OSCCs and pre-cancerous tissues was evaluated by Welche’s t-test. The expression levels of CBR3 mRNA among 64 OSCC tissues of several clinico-pathological appearances were evaluated by Mann Whitney’s U-test or chi-square test.

To examine the growth inhibitory effect of RA on OCSS cells, Ca9-22 cells were treated with 10-6 M 9-cis-RA for different periods of time (red line in Fig. 1 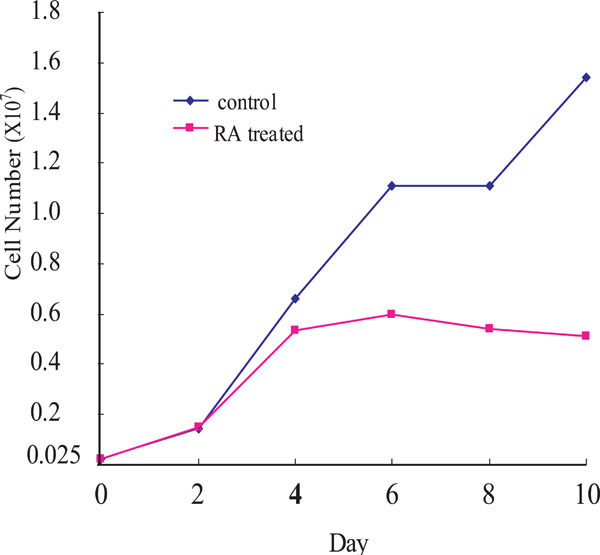 ). Ca9-2 cells were growing until day 2 after the RA treatment, after which the cell growth rate declined, and was significantly suppressed after day 4 until day 10. By comparison, untreated control cells showed continuous growth during the experiment.

Because cell growth did not change until day 2, while it began to decline at day 4 after the RA treatment, we speculated that RA-regulated growth-associated genes may have been recruited during day 3 after the RA treatment. Thus, in order to identify differentially expressed genes comparing RA-treated and untreated Ca9-22 cells, cDNA microarray analyses were performed using RNA samples extracted from the cells that were maintained in the presence or absence of RA for 3 days. Among 16,600 target cDNAs, we focused upon differentially expressed genes with greater than 2-fold changes in their expressions. 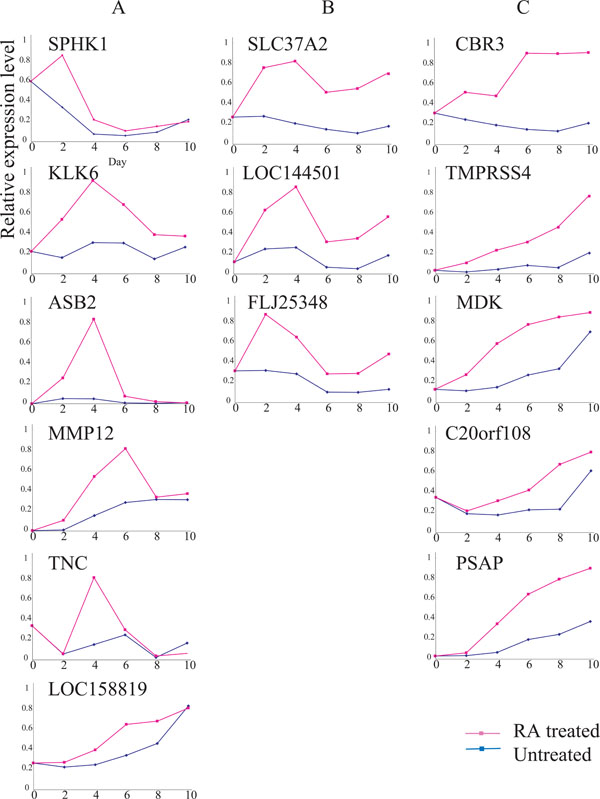 ). Some of the genes whose expressions were up-regulated by RA included SPHK1, LOC158819, MDK, C20orf08, PSAP, MMP12, TNC and LOC144501. FLJ25348 expression fluctuated due to cell growth conditions, even in the absence of RA. In contrast, the expressions of KLK6, ASB, SLC37A2, CBR3 and TMPRSS4 were relatively unchanged during the same period of time (Fig. 2

We also compared the expressions of 17 RA down-regulated genes for RA-treated and untreated Ca9-22 cells (Fig. 3 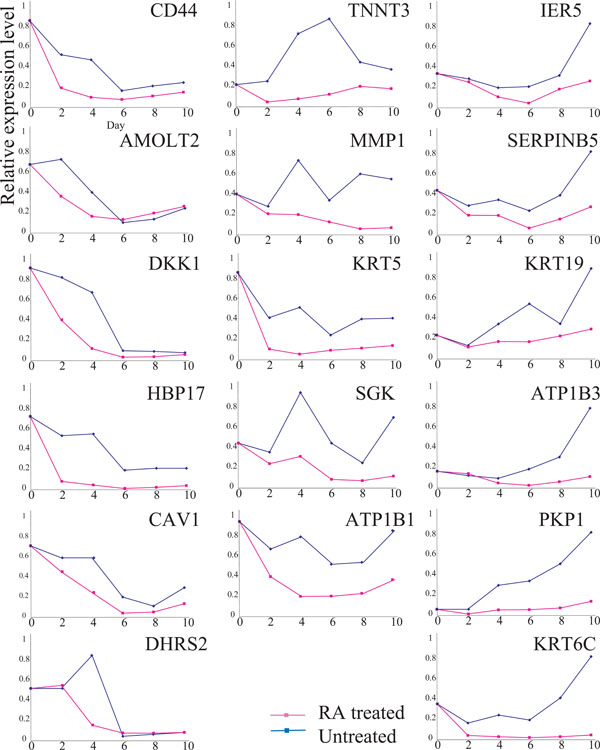 ). Time course analysis demonstrated that the expressions of the 17 genes were reduced in RA-treated cells compared to that in untreated cells. However, the expressions of all 17 genes fluctuated significantly, even in the absence of RA, suggesting that their expressions were influenced by the cell growth conditions rather than RA growth regulation. Therefore, we focused on the SLC37A2 and CBR3 genes.

Expression of CBR3 in OSCC and Pre-Cancerous Lesions

RT-PCR analysis was performed in order to analyze the transcript levels of the CBR3 gene in our sample set of 27 OSCCs (clinico-pathological features are listed in Table 2), and 19 leukoplakia (LP) tissues that included 4 hyperplasias and 3 mild, 7 moderate and 4 severe dysplasias (Fig. 4 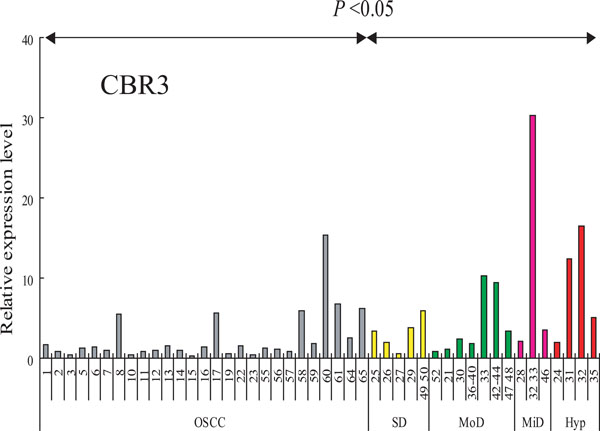 ). The expression of CBR3 was significantly higher in LP tissues than in OSCCs (P< 0.05). We also examined the expression of SLC37A2 mRNA in these LP and OSCC tissues, although no significant differences between OSCCs and LPs were observed (data not shown).

We further examined whether the expression of CBR3 mRNA was associated with the clinico-pathological features of 64 OSCC samples (Table 3). Interestingly, CBR3 mRNA expression was significantly down-regulated in highly invasive OSCCs (>YK-3) than in less invasive ones (p<0.018). CBR3 expression was not affected by age, gender, T classification or metastatic potential (Table 4). Our results demonstrate that the expression of CBR3 mRNA was significantly reduced in OSCCs, especially in highly invasive cancers compared with pre-malignant dysplasias and hyperplasias.

Our results, using both cell lines and tissues, demonstrated that the reduction of CBR3 expression was closely associated with growth suppression by RA. It was also associated with malignant transformation of oral epithelia toward invasive OSCCs. To assess the functional significance of CBR3 in OSCCs, we introduced the CBR3 expression vector into Ca9-22 cells. Three sub-clones, pcDNA1 CBR3-12, -14 and –16, were isolated. As shown in Fig. (5 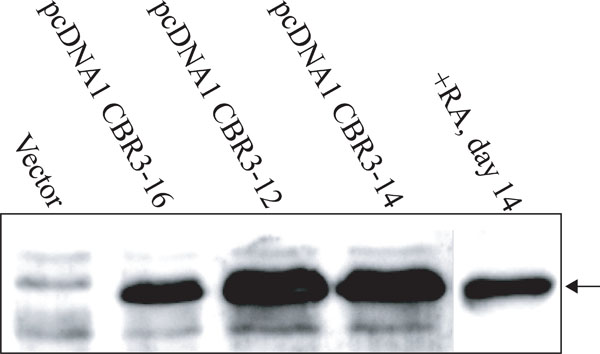 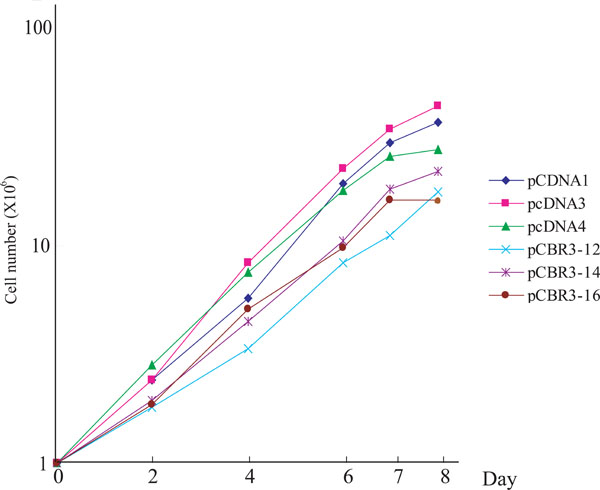 ), the cell growth rate was significantly reduced in the 3 CBR3 transfectants compared with 3 independently isolated vector-transfected cells. We next examined the effect of CBR3 and RA on the migratory potential of OSCC cells using a wound healing assay. As shown in Fig. (7 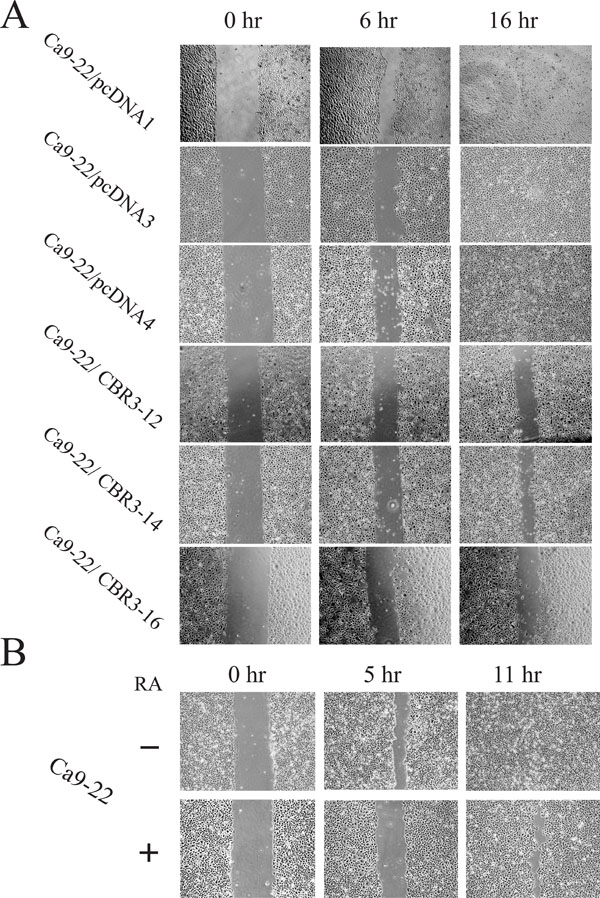 ). We also examined the effect of CBR3 on the invasive potential of OSCC cells by using an in vitro matrigel assay, although no significant differences were observed between CBR3-transfected and –untransfected Ca9-22 cells (data not shown).

Our results demonstrate that the expression of CBR3 protein causes reduced cell growth and migration potential in pre-cancerous epithelium or in OSCC cells. Our results sug-gest that the cytostatic effects of RA on OSCC cells could be mediated, at least in part, by the up-regulation of the CBR3 product. Our results also suggest that down-regulation of CBR3 expression could be a prerequisite for pre-malignant to malignant transition of oral epithelium, and progression toward invasive OSCC.

In this report, we first demonstrated that 9-cis-RA induced CBR3 expression in an OSCC cell line, Ca9-22. The induced expression of the CBR3 protein in Ca9-22 cells caused suppression of proliferation, suggesting that CBR3 is also a mediator of cytostatic effects by RA. Nuclear retinoic acid receptors are ligand-dependent transcription factors that control activity via binding to retinoic acid responsive elements (RAREs) [4Garattini E, Gianni M, Terao M. Retinoids as differentiating agents in oncology a network of interactions with intracellular pathways as the basis for rational therapeutic combinations Curr Pharm Des 2007; 13(13): 1375-400.]. We observed a potential RXR responsive element, which could be a target for the 9-cis-RA-receptor complex, that was located on the upstream region (-1924) of the transcriptional start site for the CBR3 gene (Confirmed by a TESS-string search, TessMaster@cbil upenn.edu; data not shown). However, maximal up-regula-tion of CBR3mRNA by RA required a considerable period of time (longer than 6 days; Fig. 2

). This suggests that, for this gene’s activation, there may be indirect mechanisms rather than direct transactivation via RARE.

We also demonstrated that the CBR3 mRNA expression was markedly reduced in OSCCs compared to that in pre-malignant dysplasias and hyperplasias. Among OSCCs, the expression of CBR3 was significantly down-regulated in highly invasive tumors compared with less invasive ones. This was corroborated by our observation that enforced expression of the CBR3 protein in Ca9-22 cells suppressed cell mobility.