Periodontal Bone Regeneration and the Er,Cr:YSGG Laser: A Case Report

Traditional methods of regenerating bone in periodontal bone defects have been partially successful and have involved numerous protocols and materials. More recently, it has been proposed that Er,Cr:YSGG laser energy may also be beneficial in the treatment of periodontal pockets, particularly in the regeneration of bone lost due to periodontal disease.

The purpose of this paper is to present a case report of the Er,Cr:YSGG laser being used to conservatively treat a recalcitrant periodontal pocket in the presence of a periodontal bone defect and that resulted in successful resolution of the pocket and significant radiographic bone fill at the 1 year recall visit.

This protocol using the Er,Cr:YSGG laser for the treatment of periodontal loss of attachment and periodontal bone loss may represent a less invasive alternative than traditional open-flap periodontal surgery or the intrasulcular use of other more penetrating laser wavelengths.

It has been proposed that Er,Cr:YSGG laser energy may be beneficial in the treatment of periodontal pockets. [5American Academy of Periodontology statement on the efficacy of lasers in the non-surgical treatment of inflammatory periodontal disease J Periodontol 2011; 82(4 ): 513-4.] This laser has been cleared for marketing by the FDA 510K process for soft and hard tissue application, including gain of new attachment, [6FDA 510(k) Clearances: K011041, K013908, K030523, K083927, K101658 FDA ] the removal of calculus on root surfaces [7FDA 510(k) Clearance K091746 ] and for use on bone [8FDA 510(k) Clearances K090181, K101658 ]. In clinical trials, this laser has been shown to provide either equivalent or superior results when compared to mechanical scaling and root planing. [9Niederman R. Are lasers as effective as scaling for chronic periodontitis? Evid Based Dent 2011; 12(3): 80-1.] Due to its very shallow penetration in tissue, the thermal risk to deeper tissues is minimal. [10Iwai K, Shi YW, Endo M, et al. Penetration of high-intensity Er:YAG laser light emitted by IR hollow optical fibers with sealing caps in water Appl Opt 2004; 43(12): 2568-71.]

The purpose of this paper is to present a case report of the Er,Cr:YSGG laser being used to conservatively treat a recalcitrant periodontal pocket in the presence of a bone defect and that resulted in successful resolution of the pocket and significant radiographic bone fill at the 1 year recall visit.

The re-evaluation examination revealed substantial pocket reduction with the exception of the maxillary left second molar area, where a residual 8mm probing depth was noted that was associated with radiographic evidence of a severe angular bone defect on the mesial of the left second maxillary molar (Fig. 1 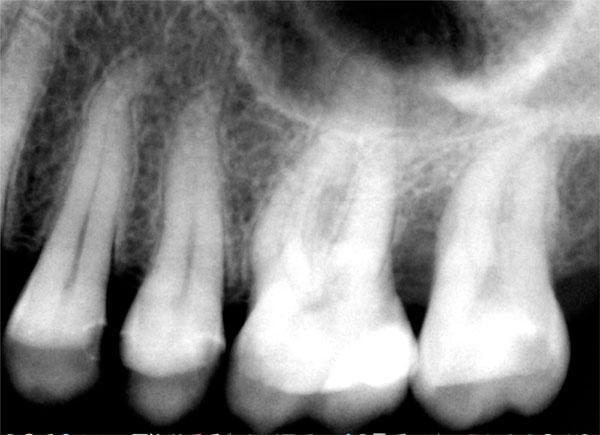 ). Er,Cr:YSGG Laser Minimally-Invasive Surgery (LMIS) was then recommended as a more definitive therapy. LMIS was performed in a conservative fashion, limiting the area of surgery to the area of the residual pocketing and bone defect. The protocol for Er,Cr:YSGG LMIS was similar to that described in Dyer and Sung (2012) [11Dyer B, Sung EC. Minimally invasive periodontal treatment using the Er,Cr:YSGG Laser.A 2-year retrospective preliminary clinical study Open Dent J 2012; 6: 74-8.] and is shown in Table 1. Local anesthesia was administered and a gingival trough down to the crest of bone was made in the area of the pocket using the Er,Cr:YSGG laser to provide improved access to the root surface associated with the bone defect. No flap was raised and the bone defect was not subjected to open-flap debridement. Mechanical debridement of the root surface was then performed using ultrasonics, slow-speed rotary diamond burs and hand instruments. The root surface and intra-pocket soft tissue were then exposed to a final regimen of laser energy with a side-firing tip that directed the majority of the energy in a direction radial to the long axis of the fiber. Finally, the soft tissue was gently pressed against the root surface and sealed with cyanoacrylate tissue adhesive.

The patient was seen at 2 weeks and reported being comfortable. Throughout the next year the patient was seen for periodontal recall visits at 3-month intervals. At 12 months a re-evaluation examination was performed that included charting and a periapical radiograph of the surgical area.

At the 1-year re-evaluation examination, probing depths in the defect area had decreased from 8mm to 2mm. The periapical radiograph (Fig. 2 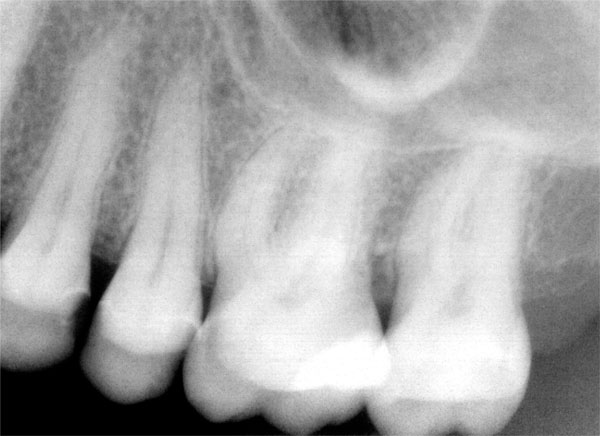 Claims of laser-induced pocket reduction and bone regeneration are not new in the marketplace and remain controversial [13Cobb CM. Lasers in periodontics a review of the literature J Periodontol 2006; 77(4): 545-64., 14Karlsson MR, Diogo Lofgren CI, Jansson HM. The effect of laser therapy as an adjunct to non-surgical periodontal treatment in subjects with chronic periodontitis a systematic review J Periodontol 2008; 79(11): 2021-8.]. Hypothesizing potential mechanisms for these claims seems moot until satisfactory evidence from independent clinical trials convincingly demonstrate this effect. Standards of evidence for such laser claims have been published by the ADA and provide guidance in this area. [15American Dental Association Technical Report No.110 standard procedures for the assessment of laser-induced effects on oral hard and soft tisues a technical report prepared by the American Dental Association and registered wtih ANSI 2008.] The literature seems to suggest that there is no evidence to support the superiority of the Nd:YAG laser over conventional modalities of periodontal therapy. [16Slot DE, Kranendonk AA, Paraskevas S, Van Der Weijden F. The effect of a pulsed Nd:YAG laser in non-surgical periodontal therapy J Periodontol 2009; 80(7): 1041-56.] The erbium lasers, when used adjunctively in conjunction with conventional scaling and root planing, have also demonstrated mixed results. In one systematic review, only two of five randomized clinical trials reported a significant improvement of periodontal indices when the Er:YAG laser was used in addition to conventional scaling and root planing. Further, the meta-analysis revealed no significant differences for any investigated parameters at six and 12 months. [9Niederman R. Are lasers as effective as scaling for chronic periodontitis? Evid Based Dent 2011; 12(3): 80-1.] A later systematic review corroborated this result. [17Sgolastra F, Petrucci A, Gatto R, Monaco A. Efficacy of Er YAG laser in the treatment of chronic periodontitis systematic review and meta-analysis Lasers Med Sci 2012; 27(3): 661-73.] However, in this systematic review, the authors caution that due to the “significant heterogeneity, a high risk of bias in three of the five included studies, and methodological shortcomings, the results of their review should be considered with great caution.” Interestingly, recent clinical evidence suggests the Er,Cr:YSGG laser, when used after conventional scaling and root planing, produces a superior result in pockets of 6mm or less. [18Kelbauskiene S, Baseviciene N, Goharkhay K, Moritz A, Machiulskiene V. One-year clinical results of Er,Cr YSGG laser application in addition to scaling and root planing in patients with early to moderate periodontitis Lasers Med Sci 2011; 26(4): 445-52.] In this context, in-vitro evidence of bacterial reduction of a contaminated root surface of up to 500 µm in depth after Er,Cr:YSGG laser exposure [19Franzen R, Esteves-Oliveira M, Meister J. Decontamination of deep dentin by means of erbium, chromium yttrium-scandium-gallium-garnet laser irradiation Lasers Med Sci 2009; 24(1): 75-80.] suggests a possible mechanism to explain this beneficial result.

It is interesting that this case produced apparent bone regeneration without occlusal adjustment or the use of systemic antibiotics. Potential co-factors that may have had an influence over the bone regeneration seen in this case would include the mechanical debridement of the root surface and any of the potential laser effects. These effects would hypothetically include a neutralizing effect of endotoxin on the root surface [20Giannelli M, Pini A, Formigli L, Bani D. Comparative in vitro study among the effects of different laser and LED irradiation protocols and conventional chlorhexidine treatment for deactivation of bacterial lipopolysaccharide adherent to titanium surface Photomed Laser Surg 2011; 29(8): 573-80., 21Folwaczny M, Aggstaller H, Mehi A, Hickel R. Removal of bacterial endotoxin from root surface with Er:YAG laser Am J Dent 2003; 16(1): 3-5.], calculus removal [22Eberhard J, Ehlers H, Falk W, Acil Y, Albers HK, Jepsen S. Efficacy of subgingival calculus removal with Er YAG laser compared to mechanical debridement an in situ study J Clin Periodontol 2003; 30(6): 511-8., 23Krause F, Braun A, Brede O, Eberhard J, Frentzen M, Jepsen S. Evaluation of selective calculus removal by a fluorescence feedback-controlled Er YAG laser in vitro J Clin Periodontol 2007; 34(1): 66-71.] root disinfection [19Franzen R, Esteves-Oliveira M, Meister J. Decontamination of deep dentin by means of erbium, chromium yttrium-scandium-gallium-garnet laser irradiation Lasers Med Sci 2009; 24(1): 75-80.] and/or an as yet undemonstrated biostimulatory effect of the Er,Cr:YSGG on the subsequent healing.

In view of the pocket reduction and bone regeneration seen in this case, it may be that this protocol has value as an alternative to traditional periodontal surgery and bone grafting techniques. Further, it appears less invasive than the LANAP technique [24Gregg RH, McCarthy DK. Laser ENAP for periodontal bone regeneration Dent Today 1998; 17(5): 88-91., 25Gregg RH, and McCarthy DK. Laser ENAP for periodontal ligament regeneration Dent Today 1998; 17(11): 86-9.] that utilizes the deeper penetrating Nd:YAG laser and also recommends systemic antibiotics and occlusal adjustment as part of the protocol. Further research is required to test the hypothetical utility of Er,Cr:YSGG LMIS to enhance periodontal bone regeneration within independent clinical trials.

Successful pocket reduction and bone regeneration was achieved using Er,Cr:YSGG Laser Minimally-Invasive Surgery (LMIS). This protocol using the Er,Cr:YSGG LMIS may represent a less invasive modality than traditional periodontal surgery or the use of other more penetrating laser wavelengths for the intra-pocket treatment of periodontal disease. The specific contribution of the Er,Cr:YSGG laser to the clinical result seen in this case remains undetermined as that can only be determined by corroborative independent clinical trials of appropriate design.