In order to improve the prediction accuracy and computational efficiency of thermal error model, a new optimization method used for the selection of temperature measurement point is proposed.

This method is based on stepwise regression. According to the results of partial-F statistic, new variable is selected one by one, unapparent variables are deleted, and optimization selection of temperature measurement point is fulfilled, thermal error model of the NC machine tool is presented.

The new modeling method was used on NC machine tool, which reduced the temperature point number from 24 to 5. Moreover, model residual was less than 5µm after compensation.

However, compared with various intelligent algorithms, regression modeling method has disadvantages of lower prediction accuracy and poorer robustness. And the temperature variable is still too much; the model based on regression is not efficient. In order to solve the problem, in the paper, according to the calculation results of partial-F statistic, new variable is selected into the regression model one by one, old variables with unapparent effect are deleted, which can reduce the numbers of temperature measurement points, optimize thermal error model, and improve the model prediction accuracy and robustness. 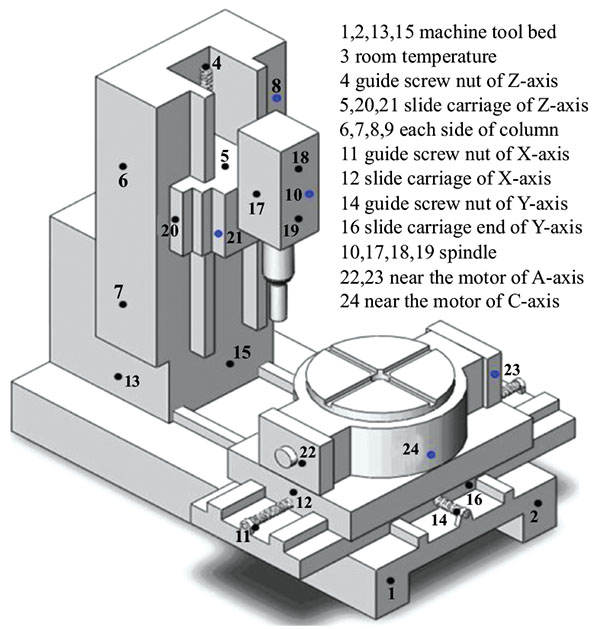 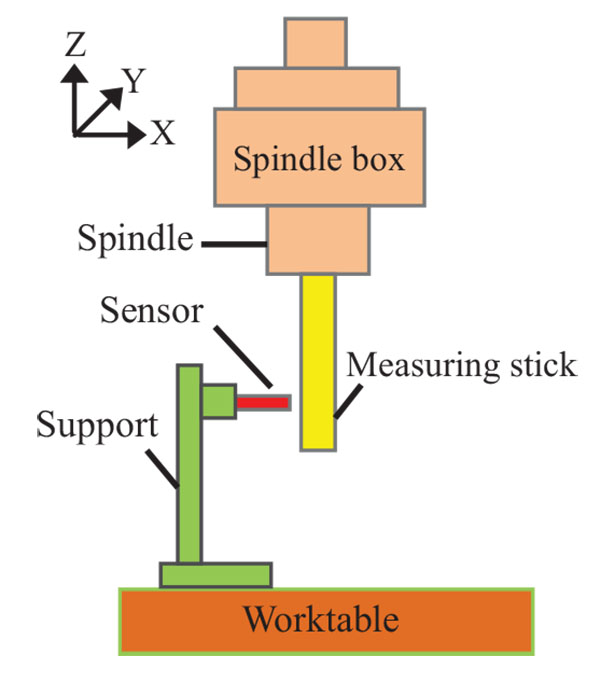 ). From the measurement result as shown in Fig. (4

(1) The temperatures Ti of 24 main heat sources are regarded as model variables, and simple linear regression model is fitted for each temperature Ti (1 ≤ i ≤ 24):

Since the gather in type 1 is empty in the beginning of optimizing variable, so,

Where, SST denotes sum of squares of deviations.

the regression model which includes independent variable Ti1 will be selected as the current model, else the optimization process will stop. It means all temperature variables seldom affect thermal error.

(2) Based on the current model, the other 23 temperature variables are selected one by one, and 23 binary regression models are established. Then, they carried out partial-F statistic calculation as follows:

temperature variable Ti2 will be selected into the model to obtain a new binary regression model:

If F(2)i1 ≤ 50, variable Ti1 will be deleted from model, only variable is retained, else the new binary regression model will be still used for calculation.

By the above thermal error model, it can be determined that the heat sources 3, 9, 11, 18 and 23 have a significant effect on thermal error of the machine tool. Through the above optimization process, the number of temperature variables was reduced from 24 to 5, which made measurement workload less, simplified thermal error model, and improved computational efficiency.

In order to verify the prediction accuracy of stepwise regression model, model test system was developed, as shown in Fig. (5 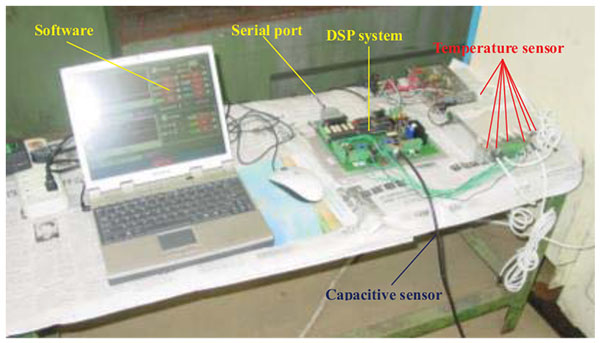 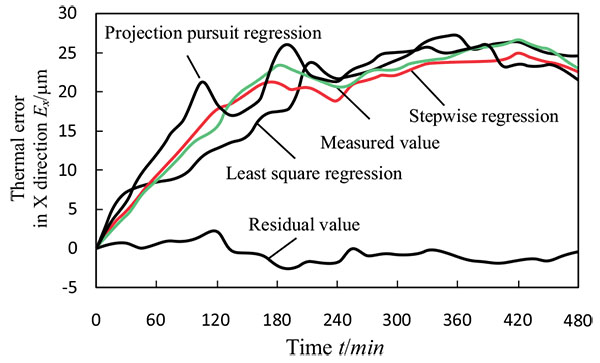 ), the prediction accuracy of modeling method based on stepwise regression is obviously better than that of least square regression and projection pursuit regression. Model residual will be less than 5µm after compensation, which satisfies the accuracy request of thermal error model. Meanwhile, due to the method of selecting and deleting temperature variables, thermal error model based on stepwise regression could adjust the model parameters timely for different types of machine tool, and the robustness of that will be considerably improved.