Unusual clinical presentations in patients with E200K familial Creutzfeldt-Jakob Disease (fCJD) have been rarely reported. Herein, we described a case of E200K fCJD presenting with subacute cranial multiple neuropathy, initially suspected to be paraneoplastic or due to a leptomeningeal carcinomatosis, considering the neoplastic comorbidity of the patient. Surprisingly, brain MRI was highly suggestive of CJD. Brain histological examination confirmed the diagnosis. Genetic tests led to the definite diagnosis of E200K fCJD. To the best of our knowledge, the current case provides the first report of a histologically-confirmed E200K fCJD starting with cranial multiple neuropathy and may widen the spectrum of the clinical variability of CJD, also in its genetic variant. Unusual presentations may lead, as in this case, to incorrect diagnostic hypothesis and unuseful therapeutic attempts in the first phase of the diagnostic process. Also in the genetic variant of CJD, brain MRI demonstrated a very high sensitivity to detect the typical abnormalities since the earliest phases of the disease. 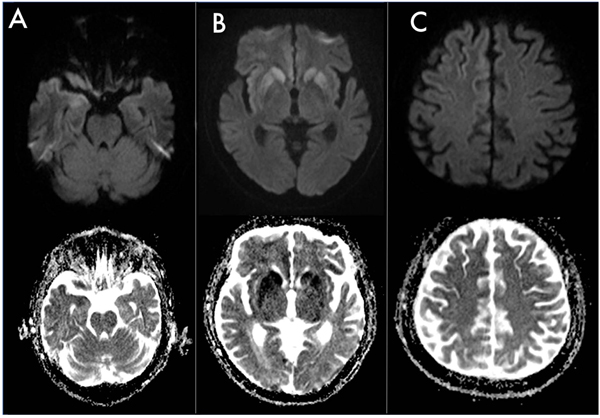 ). Taken as a whole, MRI features were suggestive of CJD. Diagnostic work-up was completed with brain FDG-PET, that revealed cortical bilateral (but more pronounced on the right side) hypometabolism, involving temporopolar, fronto-polar, frontal dorso-ventrolateral, fronto-mesial and anterior cingulate cortices (Fig. 2

The wide phenotypic variability of fCJD clinical onset has been previously reported by Chapman et al. [3Chapman J, Brown P, Goldfarb LG, Arlazoroff A, Gajdusek DC, Korczyn AD. Clinical heterogeneity and unusual presentations of Creutzfeldt-Jakob disease in Jewish patients with the PRNP codon 200 mutation. J Neurol Neurosurg Psychiatry 1993; 56(10): 1109-12.
[http://dx.doi.org/10.1136/jnnp.56.10.1109] [PMID: 8105028] ] and Cohen et al. [1Cohen OS, Kimiagar I, Korczyn AD, et al. Unusual presentations in patients with E200K familial Creutzfeldt-Jakob disease. Eur J Neurol 2016; 23(5): 871-7.
[http://dx.doi.org/10.1111/ene.12955] [PMID: 26806765] ]. The risk of misdiagnosis and useless treatments comes down to unusual atypical presentations, particularly during the earliest stages of the disease. To the best of our knowledge, the current case provides the first report of a histologically-confirmed E200K fCJD starting with multiple cranial neuropathy. In our case, the neoplastic comorbidity and the initial lack of cognitive issues were misleading, while the typical cortical, putaminal and caudate restricted diffusion prompted us to investigate and identify this genetic variant of CJD. As previously reported, atrophic changes in the cerebellum and brainstem may cause elevated diffusivity leading to low, rather than high, signal in Diffusion Weighted Images (DWI) sequences and high Apparent Diffusion Coefficient (ADC) values. Moreover, DWI scans, set specifically to detect diffusion restriction may miss brainstem and posterior fossa changes [4Cohen OS, Hoffmann C, Lee H, Chapman J, Fulbright RK, Prohovnik I. MRI detection of the cerebellar syndrome in Creutzfeldt-Jakob disease. Cerebellum 2009; 8(3): 373-81.
[http://dx.doi.org/10.1007/s12311-009-0106-8] [PMID: 19408064] ]. Further, the absence of signal abnormalities in the brainstem on T2-FLAIR and T1SE sequences may be related to the low spatial resolution of these MRI sequences, not able to detect the pathological involvement of cranial nerves and/or brainstem nuclei.

The involvement of peripheral nervous system in human prion disease has not been widely investigated. In one paper [5Niewiadomska M, Kulczycki J, Wochnik-Dyjas D, et al. Impairment of the peripheral nervous system in Creutzfeldt-Jakob disease. Arch Neurol 2002; 59(9): 1430-6.
[http://dx.doi.org/10.1001/archneur.59.9.1430] [PMID: 12223030] ], electrophysiologic examinations confirmed peripheral nervous system damage in patients with sporadic CJD and revealed also preclinical peripheral nervous system impairment. Furthermore, in another report [1Cohen OS, Kimiagar I, Korczyn AD, et al. Unusual presentations in patients with E200K familial Creutzfeldt-Jakob disease. Eur J Neurol 2016; 23(5): 871-7.
[http://dx.doi.org/10.1111/ene.12955] [PMID: 26806765] ] neuronal loss, gliosis and Prionic Protein (PrP) deposits were observed in the vestibular and cochlear nuclei of a patients presenting with sesnorineural hearing loss. Similarly, cranial nerves involvement in our patient could be explained by the direct deposition of PrP in oculomotor, VII, IX and X brainstem cranial nerves nuclei. Unfortunately, no specific histo pathological examinations for Prp deposition in the cranial nerves and nuclei has been performed in our patient. Never theless, the absence of hystologic abnormalities suggestive of metastatic involvement of cranial nerves and meninges allows us to formally exclude a metastatic spreading in the brainstem as cause of the cranial multiple neuropathy.

18F-FDG-PET have been studied in prion disease although there are few studies with autopsy-confirmed cases and currently it is not routinely used in the diagnostic evaluation. Cortical hypometabolism in human prion diseases represents a well-known phenomenon, neuropathologically related to neuronal loss, astrocytosis and/or spongiosis. Conversely, hypermetabolism in 18F-FDG-PET seems to be related with microglial activation and neuroinflammation, as demonstrated in sporadic CJD [6Wojtera M, Sobów T, Kłoszewska I, Liberski PP, Brown DR, Sikorska B. Expression of immunohistochemical markers on microglia in Creutzfeldt-Jakob disease and Alzheimer’s disease: Morphometric study and review of the literature. Folia Neuropathol 2012; 50(1): 74-84.
[PMID: 22505366] ]. This pattern has been recently described in limbic and mesolimbic structures [7Mente KP, O’Donnell JK, Jones SE, et al. Fluorodeoxyglucose positron emission tomography (FDG-PET) correlation of histopathology and MRI in prion disease. Alzheimer Dis Assoc Disord 2017; 31(1): 1-7.
[http://dx.doi.org/10.1097/WAD.0000000000000188] [PMID: 2812 1634] ] but no cases of putaminal hypermetabolism, as shown in our patient, have been currently reported.

This case widens the broad phenotypic variability of fCJD, potentially leading to misdiagnosis and unuseful therapeutic attempts. Furthermore, it confirmed MRI highest sensibility and specificity for an early diagnosis, also when clinical features at the onset are atypical for prion disease.

All authors (Lapucci C., Romano N., Boffa G., Saitta L., Nobili F., Mancardi G.L., Mandich P., Grandis M.) made a substantial contribution to the design, data collection and analysis of the research and the drafting of the manuscript and reviewed and accepted the contents of the manuscript prior to its submission.

Informed consent for publication was obtained by a next-of-kin of the patient after his death.