Metal toxicity has been identified as a possible risk factor for amyotrophic lateral sclerosis (ALS) and other neurodegenerative disorders. We conducted a retrospective chart review of urinary, hair and blood metal levels and serum ferritin in 321 people with ALS seen over a ten-year period at the Massachusetts General Hospital (MGH). We found that hair lead levels and serum ferritin levels were elevated in ALS patients compared to published normal values. Metal levels of arsenic, lead, mercury, cadmium, thallium, cobalt and aluminum in 24-hour urine specimens and lead, mercury and arsenic in serum were within the normal range. We conclude that twenty-four hour urine or blood testing for metals is not warranted as part of the evaluation of ALS. Elevated levels of serum ferritin in ALS population could reflect an underlying perturbation in iron metabolism.

open-access license: This is an open access article licensed under the terms of the Creative Commons Attribution Non-Commercial License (http://creativecommons.org/licenses/by-nc/3.0/ which permits unrestricted, non-commercial use, distribution and reproduction in any medium, provided the work is properly cited.

A retrospective chart review of 321 people with ALS seen at the Neuromuscular Clinic at the Massachusetts General Hospital (MGH) between January 1994 and December 2003 was performed. Approval for the chart review was obtained from the MGH Institutional Review Board. Participants were selected if they were evaluated for at least one laboratory test related to metal level in serum, hair or urine. All participants were identified using the computerized MGH Research Patient Data Registry (RPDR) and each participant’s diagnosis was confirmed according to the El-Escorial criteria [9Brooks B. El Escorial World Federation of Neurology criteria for the diagnosis of amyotrophic lateral sclerosis. Subcommittee on motor neuron diseases/amyotrophic lateral sclerosis of the World Federation of Neurology Research Group on neuromuscular diseases and the El Escorial "Clinical limits of amyotrophic lateral sclerosis" J Neurol Sci 1994; 124: 96-107.]. Participant’s gender, date of birth, site and date of symptom onset and date of diagnosis were recorded. The participants were selected randomly based on availability of outpatient medical records. All patients whose complete medical record file was maintained at the Outpatient Clinic were included in the chart review. The laboratory samples collected from the patients were analyzed at the Nichols Institute in Chantilly, Virginia. Normal reference ranges for metals were available and had been obtained from published data and private internal testing of healthy volunteers at the Nichols Institute [10Dillon H, Ho M. Biological Monitoring of Exposure to Chemicals: Metals. 1st ed. Wiley-Interscience 1991.-12CDC. Second National Report on Human Exposure to Environmental Chemicals Atlanta: National Center for Environmental Health 2003.].

After the initial chart review, additional stored serum samples from 30 participants with ALS and 30 healthy control volunteers who participated in an ALS observational study from 1998 to 2002 [13Qureshi M, Hayden D, Urbinelli L, et al. Analysis of factors that modify susceptibility and rate of progression in amyotrophic lateral sclerosis (ALS) Amyotroph Lateral Scler 2006; 7(3): 173-82.] were analyzed for ferritin levels. These samples were sent to the Pathology Laboratory at MGH and analyzed using an electrochemiluminescent immunoassay, ELECSYS 2010 (Roche Diagnostics, Indianapolis, IN).

Statistical analyses were performed using SAS version 8.0 (Cary, NC), and a univariate analysis were used to analyze the data. Student’s T-test was used to compare ferritin levels between ALS patients and controls. 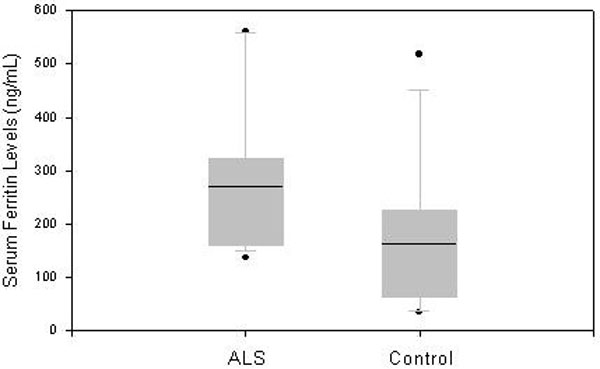 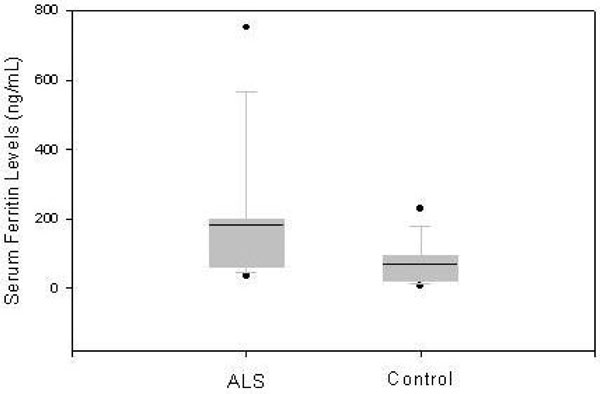 In a chart review of patients with ALS seen at MGH over a 10-year period we did not find evidence of increased metal levels in urine or blood compared to healthy controls. The hair lead levels were elevated in a limited number of participants who had this test performed. We also found significantly increased serum ferritin levels in both males and females with ALS. We confirmed this finding by measuring ferritin assays in a small set of stored serum samples.

The finding that hair lead levels were elevated in our cohort supports the earlier published data that demonstrated chronic elevation of bone lead in patients with ALS [24Kamel F, Umbach D, Munsat T, Shefner J, Hu H, Sandler D. Lead exposure and amyotrophic lateral sclerosis Epidemiology 2002; 13: 311-9.]. It has been shown that metals like zinc and cadmium regulate translation of ferritin by modulating binding of Iron-regulatory protein 1 (IRP1) to the Iron-regulatory element (IRE) in the 5’UTR of the ferritin mRNA [26Martelli A, Moulis J-M. Zinc and cadmium specifically interfere with RNA-binding activity of human iron regulatory protein 1 J Inorg Biochem 2004; 98(8): 1413-20.]. It is possible that lead acts in a similar pathway to impact the synthesis of ferritin.

The finding of elevated serum ferritin in a large sample of ALS population may simply be an acute phase reactant, rather than a specific maker of iron metabolism dysregulation. The role of ferritin in ALS needs to be studied in a longitudinal cohort and its relationship with survival and measures of disease progression should be explored. We conclude that further study of the role of ferritin and other proteins involved in iron metabolism is warranted in the ALS population, particularly in relation to genetic polymorphisms that affect cellular oxidative stress levels.