2 Departments of Biostatistics, at the University of Arkansas for Medical Sciences, Little Rock, AR 72205, USA

4 Departments of Neurobiology and Developmental Sciences, at the University of Arkansas for Medical Sciences, Little Rock, AR 72205, USA

Animal procedures were approved by the Institutional Animal Care and Use Committee. New Zealand White rabbits (n=31; mean body weight=5.2±0.04 kg) were used in this study.

Blood samples (2-3 ml) were collected from an auricular vein before embolization (baseline) and at 3 and 24 hours following embolization. The serum was separated by centrifugation and stored at -80°C until analysis. Following the instructions of the Nexus Dx S-100 Enzyme-linked immunosorbent assay test kit (International Point of Care, Inc.; Toronto, Ontario, Canada) the S-100B serum concentrations were measured. The test applies the sandwich ELISA technique utilizing murine monoclonal anti-S-100 protein coated microplate wells, diluted serum, standards and controls. The optical density of the oxidized enzymatic product was proportional to the concentration of S-100B in the sample, and a set of S-100B protein standards was used to construct a standard curve of absorbance. From this the S-100B concentrations in test serum samples were calculated.

Twenty-four hours following embolization, rabbits were sacrificed by intravenous administration of 1.5-mL of pentobarbital (Euthasol; Virbac Corp.; Fort Worth, TX). The 24-hour time point was chosen as part of a larger stroke study to permit both complete development of tissue infarction and three serial measurements of S-100B levels that demonstrate a time-dependent increase in serum levels. The brain was harvested, immediately placed in chilled physiological saline for 1 hour, and then sliced coronally at 4-mm intervals using a chilled brain mold (RBM-7000C; ASI Instruments Inc.; Warren, MI). Coronal brain sections (n=8 in each rabbit) were placed in 1% 2,3,5-triphenyltetrazolium chloride (TTC) (Sigma-Aldrich; St. Louis, MO) for 45 minutes at 37ºC, fixed in 10% formalin, and digitally photographed. Areas of infarction were measured using digital analysis (NIH ImageJ). Percent infarct volume was calculated by dividing the sum of the infarct volumes into the sum of the section volumes and multiplying by 100%.

Percent infarct volume was compared among treatment groups using one-way ANOVA. The Bonferroni testing adjustment was used for comparison of each treatment group with the control. Percent infarct volume for each group is reported as the least square mean±standard error as generated by PROC GLM in the SAS® software (SAS Inst. Inc.; Cary, NC). Three hour and 24-hour S-100B values for each rabbit were divided by that rabbit’s baseline measurement to create 3- and 24-hour fold change values. The effects of treatment and time on these S-100B fold changes were tested using an unstructured covariance matrix in PROC MIXED in SAS®, a repeated-measures ANOVA procedure, followed by individual group comparisons using least squares means. Fold changes are reported as least squares means±standard errors. Pearson correlation was used to evaluate the association between percent infarct volume and 24-hour S-100B values.

Thirty-one rabbits completed the protocol and were evaluated for serum S-100B levels and infarct volumes. The S-100B fold increase over baseline was influenced by time (P=0.0002) and treatment (P=0.04). Control rabbits had a 3.1-fold increase in S-100B at 24 hours (Fig. 1 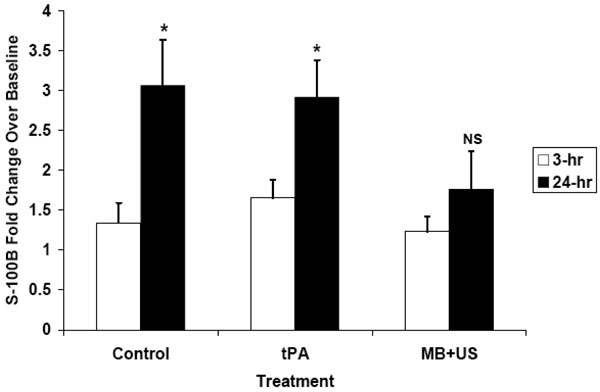 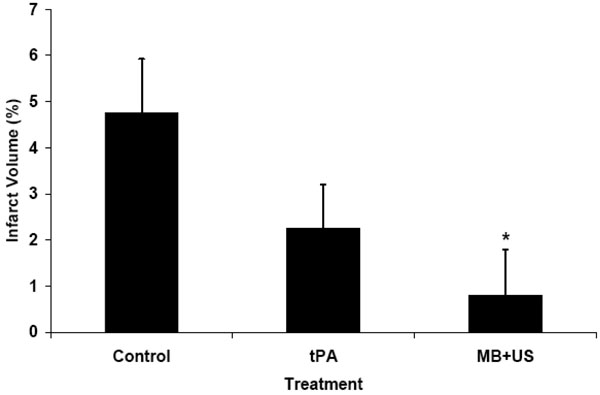 Previous studies in the development of tPA therapy demonstrated improved outcomes in varied animal models of stroke, showing the thrombolytic and reperfusion potential of tPA [11Zivin JA, Fisher M, DeGirolami U, Hemenway CC, Stashak JA. Tissue plasminogen activator reduces neurological damage after cerebral embolism Science 1985; 230: 1289-92.,13Sakurama T, Kitamura R, Kaneko M. Tissue-type plasminogen activator improves neurological functions in a rat model of thromboembolic stroke Stroke 1994; 25: 451-6.]. In the present study with an angiographic model of embolic stroke, treatment with tPA resulted in numerically decreased infarct volumes (nearly a 50% reduction) but did not reach statistical significance. Although this endpoint trended in the expected manner, the sample size was too low and the statistical power insufficient to detect a definite difference. Further, S-100B elevation 24 hours after clot embolism was similar to controls and, thus, tPA was not as effective as MB+US in treating stroke. When tPA achieves thrombolysis and reperfusion earlier, it provides significant neuroprotection. However, continued occlusion and ischemia result in adverse effects including blood-brain barrier (BBB) disruption and infarction. Elevations in serum S-100B similar to controls suggest the harmful effects of BBB permeability in rabbits in which tPA did not provide early thrombolysis.

Although measurements of S-100B 24 hours after embolization of the middle cerebral artery were useful when compared with baseline levels, the lack of follow-up beyond 24 hours represents a limitation of the present study. Animal studies [14Tanaka Y, Marumo T, Omura T, Yoshida S. Relationship between cerebrospinal and peripheral S100B levels after focal cerebral ischemia in rats Neurosci Lett 2008; 436: 40-3.] as well as clinical data indicate that elevated concentrations of S-100B persist for some days, with peaks observed past 24 hours. Future studies in this rabbit model will examine the development of S-100B over several days and compare this to functional outcomes and histology.

In conclusion, S-100B can be measured in rabbits and its values correlate with damage from stroke and successful response to treatment. This simple measurement may provide an easy and reliable surrogate marker for successful clot lysis in subsequent thrombolysis trials.