A high serum level of homocysteine, known as hyperhomocystenemia (HHcy) is associated with vascular dysfunction such as altered angiogenesis and increased membrane permeability. Epidemiological studies have found associations between HHcy and Alzheimer’s disease (AD) progression that eventually leads to vascular dementia (VaD). VaD is the second most common cause of dementia in people older than 65, the first being AD. VaD affects the quality of life for those suffering by drastically decreasing their cognitive function. VaD, a cerebrovascular disease, generally occurs due to cerebral ischemic events from either decreased perfusion or hemorrhagic lesions. HHcy is associated with the hallmarks of dementia such as tau phosphorylation, Aβ aggregation, neurofibrillary tangle (NFT) formation, neuroinflammation, and neurodegeneration. Previous reports also suggest HHcy may promote AD like pathology by more than one mechanism, including cerebral microangiopathy, endothelial dysfunction, oxidative stress, neurotoxicity and apoptosis. Despite the corelations presented above, the question still exists – does homocysteine have a causal connection to AD? In this review, we highlight the role of HHcy in relation to AD by discussing its neurovascular effects and amelioration with dietary supplements. Moreover, we consider the studies using animal models to unravel the connection of Hcy to AD.

HHcy has been associated with B vitamin deficiencies of folate, B6, and B12 due to their role as cofactors in the metabolism of Hcy. Vitamin B12 is also a cofactor in other methylation reactions. In particular, vitamin B12 deficiency has been shown to result in cognitive impairment [17Moore E, Mander A, Ames D, Carne R, Sanders K, Watters D. Cognitive impairment and vitamin B12: a review Int Psychogeriatr 2012; 24: 541-6.]. It is not clear whether the cognitive impairment is a direct consequence of B12 deficiency or whether it is a result of the subsequent HHcy. One such mechanism for this observation could be linked to myelin basic protein. Myelin basic protein is methylated on an arginine group and a defect in methylation could produce an unstable protein, leading to neurological disorders [18Sponne IE1, Gaire D, Stabler SP , et al. Inhibition of vitamin B12 metabolism by OH-cobalamin c-lactam in rat oligodendrocytes in culture a model for studying neuropathy due to vitamin B12 deficiency Neurosci Lett 2000; 3: 191-4.].

As mentioned above folic acid is a B-group water-soluble vitamin. It is comprised of the aromatic pterydine ring linked to para-aminobenzoic acid and one or more glutamate residues. Folate derivatives are important vitamins that transfer one-carbon units for several critical cellular reactions. The in folate cycle in association with Hcy is depicted in Fig. (1 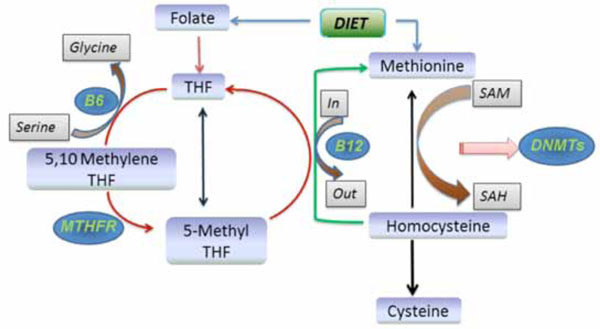 ). Neuronal function relies heavily on the supply of methyl groups for such functions as neurotransmitter synthesis and membrane lipid metabolism. Furthermore, folates are required for the metabolism of Hcy. The regulation of Hcy allows for the maintenance of neuroplasticity and neuronal integrity, when HHcy develops neurotoxicity is known to occur [19Kruman II, Mouton PR, Emokpae R Jr, Cutler RG, Mattson MP. Folate deficiency inhibits proliferation of adult hippocampal progenitors Neuroreport 2000; 16: 1055-59.]. Such detrimental effects can be attributed to mechanisms such as excitotoxicity and mitochondrial dysfunction, which may lead to apoptosis [20Kronenberg G, Colla M, Endres M. Folic acid, neurodegenerative and neuropsychiatric disease Curr Mol Med 2009; 9: 315-23.]. One study has shown HHcy in mice along with B-vitamin deficiency diet cause cerebral microvascular rarefaction which may bring about cognitive dysfunction. Clinical reports suggest that disease progression of a dementia patient with HHcy and associated morbidities can be lowered by supplementation of food or nutrient enriched with B vitamins. Another study has shown the food supplementation of folates and vitamin B12 ameliorating HHcy and thus Hcy induced tau hyperphos-phorylation as well as protein phosphatase-2A (PP2A) inactivation [21Zhang CE, Tian Q, Wei W , et al. Homocysteine induces tau phosphorylation by inactivating protein phosphatase 2A in rat hippocampus Neurobiol Aging 2008; 29: 1654-65.]. After reviewing the literature it is apparent that the association with HHcy and cognitive impairment is evident and should be elucidated further.

The BBB is formed by highly specialized endothelial cells that line brain capillaries and allow specific molecular exchange between micro-vessels, microglia and neurons. The BBB relies on the tight junctions present between endothelial cells of the capillaries to provide a relatively closed environment for the brain. Alteration of tight junction proteins promotes BBB dysfunction, which is associated with a reduction of cerebral blood flow, hypoxia and accumulation of neurotoxic molecules such as free radicals and inflammatory molecules in the brain [38Kalaria RN. Vascular basis for brain degeneration faltering controls and risk factors for dementia Nutr Rev 2010; 68 suppl 2:: S74-87.]. In contrast to leaky vessels in visceral organs, the BBB restricts entry of polar molecules into the brain but at the same time allows limited nutrients such as vitamins, glucose, and amino acids through specific transporters [39Zlokovic BV. Neurovascular pathways to neurodegeneration in Alzheimer's disease and other disorders Nat Rev Neurosci 2011; 12: 723-38.]. BBB disruption promotes micro-vascular degeneration, accumulation of toxic substances (Beta amyloid, NFT and Tau hyperphos-phorylation), neurodegeneration, neuroinflammation and memory impairment [40Bell RD. The imbalance of vascular molecules in Alzheimer's disease J Alzheimers Dis 2012; 32: 699-09.].

Vascular dementia (VaD) is defined as the loss of cognitive function resulting from cerebrovascular disease that damages the hippocampus and other cognitive centers, which important for memory, cognition, and behavior [41Quadri P, Fragiacomo C, Pezzati R , et al. Homocysteine, folate, and vitamin B-12 in mild cognitive impairment, Alzheimer disease, and vascular dementia Am J Clin Nutr 2004; 80: 114-22.]. It is the second most common form of dementia after AD, accounting for 20% of all dementia cases worldwide [42Dubois MF, Hebert R. The incidence of vascular dementia in Canada a comparison with Europe and East Asia Neuroepidemiology 2001; 20: 179-87.]. In addition, VaD is thought to occur in 20% to 55% of AD cases [43Desai BS, Schneider JA, Li JL, Carvey PM, Hendey B. Evidence of angiogenic vessels in Alzheimer's disease J Neural Transm 2009; 116: 587-97.]. Previous studies, which have induced HHcy in rodents, produced cognitive decline, systemic vascular inflammation, atherosclerosis and a loss of central cholinergic neurons [44Pirchl M, Ullrich C, Humpel C. Differential effects of short- and long-term hyperhomocysteinaemia on cholinergic neurons, spatial memory and microbleedings in vivo in rats Eur J Neurosci 2010; 32: 1516-27.]. AD and VaD share many risk factors, one such being HHcy, thus suggesting related etiology and pathogenesis [45Herrmann W, Obeid R. Homocysteine a biomarker in neurodegenerative diseases Clin Chem Lab Med 2011; 49: 435-1.]. It is common for patients of each disease to share similar symptoms [46Humpel C. Chronic mild cerebrovascular dysfunction as a cause for Alzheimer's diseaseκ Exp Gerontol 2011; 46: 225-32.]. Therefore, the differentiation from AD to VaD is based on evidence of cerebrovascular function alteration and pathology in VaD (Fig. 2 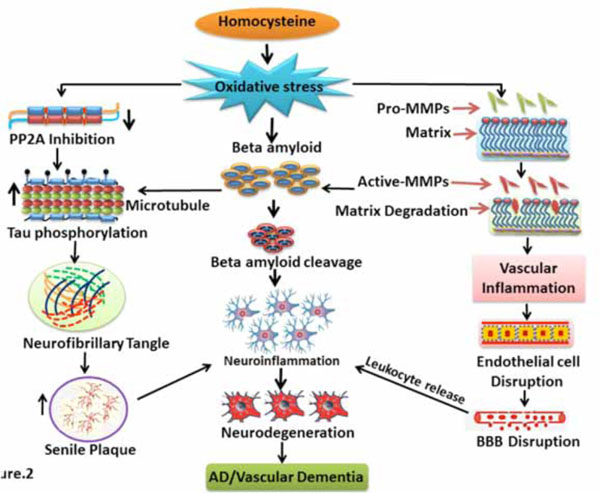 ). Furthermore, it has been suggested that dementia prevention can be effective without delay if the vascular components are aggressively targeted through the treatment of vascular risk factors such as HHcy [47Wehling M, Groth H. Challenges of longevity in developed countries vascular prevention of dementia as an immediate clue to tackle an upcoming medical, social and economic stretch Neurodegener Dis 2011; 8: 275-82.].

Although AD and many other dementia subtypes are not believed to be primarily vascular diseases, it is important to reiterate many of the subtypes share common risk factors with vascular diseases. As discussed above, many studies have shown dysfunctional vessels across the subtypes of cognitive disorders. One known condition to affect the cerebrovascular homeostasis is HHcy and evidence suggests HHcy may promote dementia by more than one mechanism, including cerebral microangiopathy, endothelial dysfunction, oxidative stress, neuronal damage, enhancement of beta-amyloid peptide-mediated vascular toxicity, neurotoxicity, and apoptosis. Therefore, further studies particularly with animal models make for promising returns as to the etiology of dementia disorders. Furthermore, because effective treatments for HHcy have been studied and supported, potential novel therapies for patients with dementia could be devised and clinically tested.