Endogenous uveitis has long been considered to be uncommon in elderly patients. Recently, population-based studies have shown an increase in the incidence of uveitis with inreasing age. It was the aim of this study to analyse the age distribution of patients presenting with endogenous uveitis in the setting of an eye centre.

A large number of patients presenting with endogenous uveitis is in the elderly age group. An early and appropriate diagnostic work-up for uveitis is recommended for the elderly.

Endogenous uveitis is a potentially sight-threatening condition. Early diagnosis and initiation of treatment may reduce the risk of permanently reduced visual acuity. The differential diagnosis of uveitis may include a broad spectrum of ocular diseases, e.g. trauma, degenerative diseases, dystrophies, diabetic retinopathy or vascular occlusion. In the past decades, endogenous uveitis was considered to have a peak incidence in middle-aged individuals and to be less likely to occur in the elderly. This assumption was based on the epidemiological study by Darrell et al. [1Darrell RW, Wagener HP, Kurland LT. Epidemiology of uveitis. Incidence and prevalence in a small urban community Arch Ophthalmol 1962; 68: 502-14.], which for more than 40 years has been the only population-based epidemiological study on uveitis in the U.S. The findings of Darrell et al. have influenced the contents of many textbooks. Recently, two large population-based studies in the U.S. have challenged the concept that endogenous uveitis is most common in middle-aged persons. Rather, these sudies have shown an increased incidence of endogenous uveitis with increasing age [2Gritz DC, Wong IG. Incidence and prevalence of uveitis in Northern California; the Northern California Epidemiology of Uveitis Study Ophthalmology 2004; 111: 491-500., 3Reeves SW, Sloan FA, Lee PP, Jaffe GJ. Uveitis in the elderly: epidemiological data from the National Long-term Care Survey Medicare Cohort Ophthalmology 2006; 113: 307.]. In light of these findings we have retrospectively evaluated patient data from our clinic. It was the aim of this study to analyze the age distribution of patients presenting with endogenous uveitis in our clinic, and thus to estimate the priority that should be awarded to a uveitis work-up for the differential diagnosis of endogenous uveitis in the elderly patient.

The electronic patient records from all patients presenting in our clinic between January, 1st 2002 and March, 1st 2007 were retrospectively searched for diagnoses indicating intraocular inflammation. Patient records are exclusively in the form of electronically stored data (ifa Systems, Cologne, Germany). As the ICD-10 code does not sufficiently differentiate between ophthalmological disease entities, diagnoses are also stored in text form. This eliminates the loss of information by unexact representation of diagnoses in the ICD-10. Data analysis comprised two steps: Firstly, a database search was done for all relevant diagnoses that were indicative of intraocular inflammation, e.g. cystoid macular edema. The search also included systemic diseases known to be associated with intraocular inflammation, e.g. sarcoidosis. Secondly, the individual patient records that came up in the first database search were reviewed individually. The classification of uveitis adhered to the Standardization of Uveitis Nomenclature (SUN) Working Group [4Jabs DA, Nussenblatt RB, Rosenbaum JT. Standardization of uveitis nomenclature for reporting clinical data. Results of the First International Workshop Am J Ophthalmol 2005; 140: 509-16.]. Only patients suffering from active endogenous uveitis were included. Standard workups for uveitis included a detailed patient history and anterior and posterior segment biomicroscopy. Thereafter, an organized diagnostic evaluation with laboratory testing and medical consultations were planned accordingly. Patients with diabetic retinopathy, thromboembolic diseases of retinal vessels and postoperative intraocular inflammation within three months of intraocular surgery were excluded. Patients with inactive inflammatory lesions of the choroid and / or retina, or residuals of past episodes of uveitis were also excluded, as long as there was no recurrence within the observation period (e.g. inactive toxoplasmosis scars).

After reviewing the individual patient records, 278 patients were identified who presented with active endogenous uveitis between January, 1st 2002 and March, 1st 2007. The age distribution is presented in Fig. (1 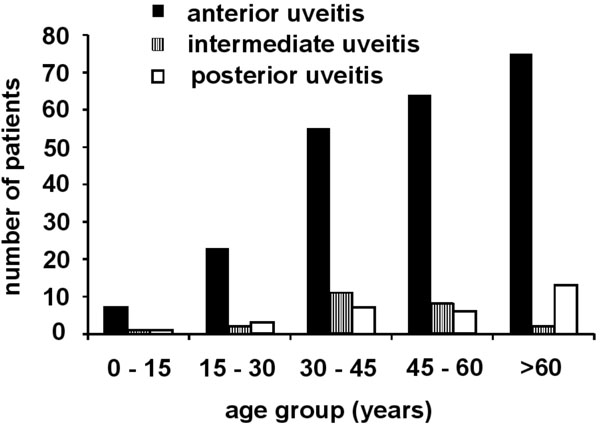 ). The anatomical classification and gender distribution of uveitis patients is presented in Table 1. In two patients who were over 60 years old, an intraocular lymphoma was diagnosed.

In conclusion, our study shows that in clinical practice, a diagnosis of endogenous uveitis is made at least as often in patients over 60 years of age as in the younger age groups. We therefore recommend an early and appropriate diagnostic work-up for uveitis in the elderly presenting with signs of intraocular inflammation.