To assess the outcomes of intravitreal bevacizumab injection in the management of radiation maculopathy secondary to plaque radiotherapy, and to identify optimal treatment strategies.

A retrospective review of all choroidal melanoma patients at one referral center who were treated with plaque radiotherapy, subsequently developed radiation maculopathy, and received intravitreal bevacizumab.

Intravitreal bevacizumab injection was effective in stabilizing visual acuity in patients with radiation maculopathy. Patients benefited most from injections administered every 90 days or sooner. Fluorescein angiography can help identify patients who will respond favorably to treatment.

The research into the use of bevacizumab have utilized various treatment regimens ranging from one-time injection to multiple injections spaced every eight weeks. In these studies, not all patients respond to bevacizumab injections and there is still no clear tool that can identify patients who will respond favorably to intravitreal bevacizumab. In this study, we investigate the effects of intravitreal bevacizumab therapy on vision and macular thickness, we explore optimal dosing schedules, and we explore the use of fluorescein angiography as an indicator of future success with bevacizumab treatment.

Following approval by the University of Michigan (UM) institutional review board, we conducted a retrospective review of all patients at UM who underwent Iodine-125 plaque radiotherapy for choroidal melanoma and, subsequently, developed radiation maculopathyfrom October 2010 through December 2014. Patients were included in the study if they had received at least one dose of intravitreal bevacizumab to treat radiation retinopathy. Patients with preexisting macular disease (e.g. age-related macular degeneration, diabetic maculopathy, macular hole and surface wrinkling retinopathy), subfoveal location of choroidal melanoma, or media opacities preventing OCT imaging were excluded from the study. All patients who have undergone plaque radiotherapy receive visual acuity testing, fundus examination, and a Heidelberg Engineering Spectralis OCT to quantify subfoveal macular thickness at each follow up examination.


Since 2010 at UM, intravitreal bevacizumab has been a first line treatment for macular edema secondary to radiation retinopathy in patients treated for choroidal melanoma. Bevacizumab is given if a patient has clinical signs on dilated fundus exam consistent with radiation maculopathy (macular edema, hard exudates, or retinal hemorrhages) and either, 1-two or more lines of vision loss on Snellen visual acuity since the last follow up, or, 2- subfovealmacular thickness more than 300 microns on OCT. Patients receive intravitreal bevacizumab injections (Genentech, San Francisco, CA) at a dose of 1.25 mg/0.05 ml. The goal of treatment is that all patients receive monthly injections for the first three months of therapy, followed by injection intervals adjusted to patient response. Following monthly doses for three months, patients are evaluated at follow up visits by best corrected Snellenvisual acuity (VA) and subfoveal macular thickness (µm) on OCT. If the visual acuity decreases more than two Snellenacuity lines or subfoveal macular thickness increased 100 microns on OCT, then intravitreal bevacizumab is repeated.

All patients were evaluated for changes in visual acuity following injections, changes to macular thickness following injections, and timing between injections. In addition, a post-hoc review of macular fluorescein angiograms (FA) was performed on the eleven patients who received this test at the time of the first bevacizumab injection. Student's T-tests were used to evaluate differences between groups with an alpha level of 0.05.Data were analyzed and graphed using the R Statistical Environment [13European Environment Agency. R Core Team. (2013). R: A language and environment for statistical computing. R Foundation for Statistical Computing, Vienna, Austria ]. 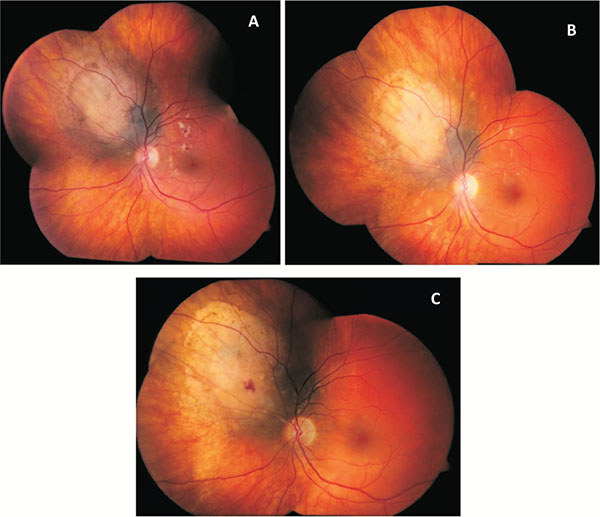 ). This patient experienced significant vision loss down to a level of 20/50 in the affected eye due to radiation retinopathy (Fig. 1A

). After an initial series of one injection per month for three months, the retinopathy had improved and vision had risen to 20/30 (Fig. 1B

). At the most recent follow up, 18 months after the first injection and after a total of 6 injections, the retinopathy had nearly disappeared and the patient's vision remained stable at 20/30 (Fig. 1C

Mean visual acuity over time of all patients included in the study. 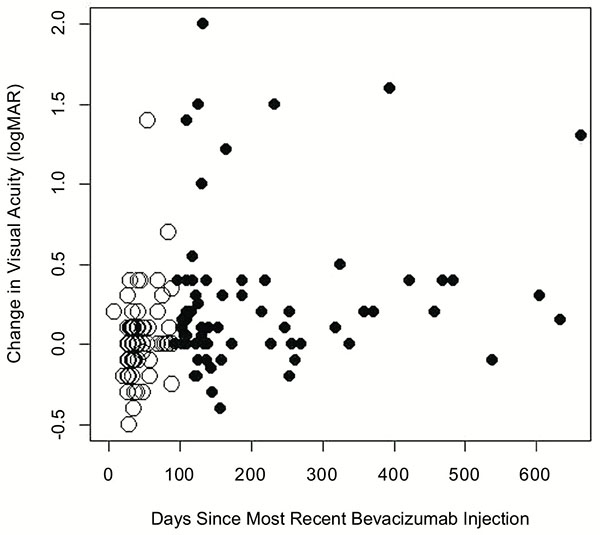 The mean central macular thicknesses over time of all patients included in the study.

When the subfoveal macular thickness was compared to the time since the most recent intravitreal bevacizumab (Fig. 3 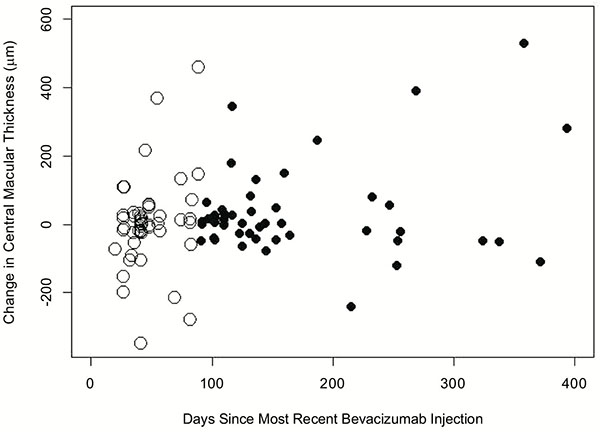 Following plaque radiotherapy, visual loss is usually progressive. A review of patients treated with plaque radiotherapy in Collaborative Ocular Melanoma Study (COMS) showed that the median visual acuity of 20/32 at presentation decreased to 20/40 at the one-year follow-up, 20/50 at two-year follow-up and 20/125 at three-year follow-up [1Melia BM, Abramson DH, Albert DM, et al. Collaborative ocular melanoma study (COMS) randomized trial of I-125 brachytherapy for medium choroidal melanoma. I. Visual acuity after 3 years COMS report no. 16. Ophthalmology 2001; 108(2): 348-66.
[http://dx.doi.org/10.1016/S0161-6420(00)00526-1] [PMID: 11158813] ].Similarly, Shields et al. reported 3% of the patients had visual acuity of 20/200 or worse at one year, 34% at five years, and 68% at ten years. Shah et al. reported that if intravitreal bevacizumab injections are started at the first sign of radiation vasculopathy on optical coherence tomography and injections are repeated for persistent changes, 51% of patients will demonstrate 20/50 or better vision at the median follow-up of 36 months [4Shah NV, Houston SK, Markoe AM, Feuer W, Murray TG. Early SD-OCT diagnosis followed by prompt treatment of radiation maculopathy using intravitreal bevacizumab maintains functional visual acuity. Clin Ophthalmol 2012; 6: 1739-48.
[http://dx.doi.org/10.2147/OPTH.S34949] [PMID: 23152651] ].In the current study, after an average of two years since radiation treatment and documented vision decline in all patients, we observed that median visual acuity remained stable for nine months following intravitreal bevacizumab therapy. We believe that inhibition of VEGF leads to decreased edema in the macula, which prevents related compromise of macular function. However, it does not reverse the vascular and neural damage previously caused by the radiation.


Intravitreal anti-VEGF therapy for age-related macular degeneration was initially described as a monthly injection. However, the cost and burden of care on the patient leads to evaluation of different approaches [20Haller JA. Current anti-vascular endothelial growth factor dosing regimens: benefits and burden. Ophthalmology 2013; 120(5Suppl): S3-7.
[http://dx.doi.org/10.1016/j.ophtha.2013.01.057] [PMID: 23642784] ].The Comparisons of Age-Related Macular Degeneration Treatment Trial (CATT) [21Martin DF, Maguire MG, Ying GS, Grunwald JE, Fine SL, Jaffe GJ. Ranibizumab and bevacizumab for neovascular age-related macular degeneration. N Engl J Med 2011; 364(20): 1897-908.
[http://dx.doi.org/10.1056/NEJMoa1102673] [PMID: 21526923] ] found that as needed injections were not inferior to monthly injections for the treatment of age-related macular degeneration. The treat-and-extend approach has also be suggested in age related macular degeneration [22Shienbaum G, Gupta OP, Fecarotta C, Patel AH, Kaiser RS, Regillo CD. Bevacizumab for neovascular age-related macular degeneration using a treat-and-extend regimen: clinical and economic impact. Am J Ophthalmol 2012; 153(3): 468-473.e1.
[http://dx.doi.org/10.1016/j.ajo.2011.08.011] [PMID: 21996309] ].While radiation maculopathy is fundamentally different than the diseases studied in these trials, our data suggest that as-needed dosing is reasonable choice in these post-radiation patients. In the current study, after an initial monthly dose for three months, we used an as-needed protocol in order to lengthen the treatment interval. Our results suggest that vision can be stabilized even during the as-needed dosing schedule, with a special caveat that patients with radiation maculopathy benefit most from IVB injections administered every 90 days or sooner.

In the current study, intravitreal bevacizumab therapy was effective in stabilizing visual acuity for extended periods of time in some patients. However, not all patients responded successfully to the treatment. Preliminary data suggest that fluorescein angiography can help identify patients who will benefit more from anti-VEGF therapy, specifically those with late-phase macular leakage.

Intravitreal bevacizumab injections stabilize visual acuity in patients who are actively losing vision secondary to radiation maculopathy. Patients benefited most from injections administered within three months of the prior injection. Not all patients respond to intravitreal injections. Fluorescein angiography can be used to determine if patients will respond favorably to treatment.