We report a case of lithium-induced downbeat nystagmus and horizontal gaze palsy in a 62-year-old woman who was treated for a bipolar affective disorder with lithium carbonate for one month. At presentation serum lithium was within therapeutic range. No alternative causes of the ocular motility disturbances were found, and the patient improved significantly as lithium carbonate was discontinued.

A 62-year-old woman was admitted at the Department of Neurology, Rigshospitalet-Glostrup, with generalized weakness, extremity tremor and recurrent falls. Past medical history included epilepsy and depressions treated with lamotrigine 75 mg/day, valproate 1500 mg/day and venlafaxin 375 mg/day. Four weeks before presentation lithium carbonate 600 mg/day was added. The patient had no history of alcohol abuse. 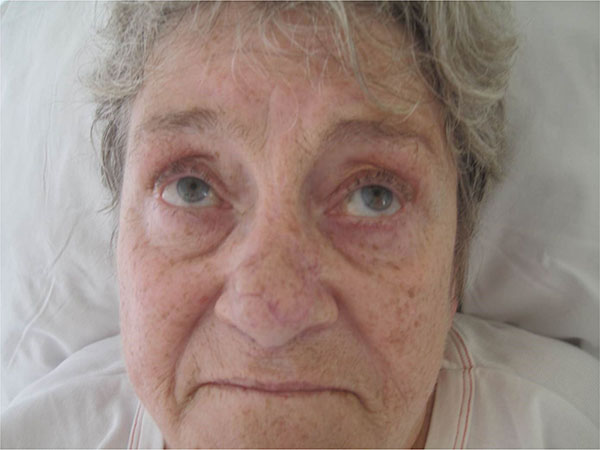 ). The patient was only shortly able to bring her eyes in the primary position of gaze, which elicited DBN, and was unable to bring her eyes below the horizontal plane. No voluntary horizontal saccades or pursuit movements could be elicited, and the gaze palsies were not overcome by activation of the vestibulo-ocular reflexes by doll’s head manoeuvre. Pupils were equal and light reflexes normal. The patient was unable to cooperate to formal visual acuity assessment.


Lithium intoxication was suspected. Repeated testing of serum lithium revealed an increase to 1.0 mmol/L, and lithium carbonate was discontinued. Within one week serum lithium level decreased to 0.2 mmol/L and symptoms and signs improved significantly. Serum lamotrigine and valproate levels were only analysed one week after lithium discontinuation when clinical signs and symptoms had improved significantly. At this point lamotrigine and valproate levels were slightly over therapeutic range, serum lamotrigine 66 µmol/L (4-50 µmol/L) and serum valproate 714 µmol/L (300-700 µmol/L). Due to the marked clinical improvement after lithium discontinuation, the slightly elevated levels of valproate and lamotrigine were not considered causative, and therefore both drugs were continued. Seven weeks after initial presentation at the Neurological Department, vertical and horizontal eye movements had normalized apart from a residual low-amplitude DBN and oscillopsia on down gaze to the right and left. Best corrected visual acuity was 20/16 in each eye. Tremor and cognitive functions had normalized though some degree of retrograde amnesia persisted.

We strongly suspect the clinical findings to be caused by lithium carbonate intoxication. Alternative causes of DBN i.e. structural lesions of the craniocervical junction or cerebellum, encephalitis or hypomagnesemia were ruled out, and symptoms improved significantly as lithium carbonate was discontinued.

Vitamin B12 deficiency is known to cause eye movement disorders like DBN and internuclear ophthalmoplegia, as well as gait ataxia [4Akdal G, Yener GG, Ada E, Halmagyi GM. Eye movement disorders in vitamin B12 deficiency: two new cases and a review of the literature. Eur J Neurol 2007; 14(10): 1170-2.
[http://dx.doi.org/10.1111/j.1468-1331.2007.01824.x] [PMID: 17880572] , 5Mayfrank L, Thoden U. Downbeat nystagmus indicates cerebellar or brain-stem lesions in vitamin B12 deficiency. J Neurol 1986; 233(3): 145-8.
[http://dx.doi.org/10.1007/BF00314420] [PMID: 3487624] ]. However, in our patient serum B12 level was normal, and B12 deficiency was therefore not considered the cause of DBN. Differential diagnostic considerations in patients with ataxia and affection of the ocular motility includes Wernicke`s encephalopathy as well as paraneoplastic neurological syndromes (PNS). Wernicke`s encephalopathy is due to nutritional deficiencies especially thiamine deficiency, and vertical nystagmus has been reported in patients with this condition [6Suzuki Y, Matsuda T, Washio N, Ohtsuka K. Transition from upbeat to downbeat nystagmus observed in a patient with Wernicke’s encephalopathy. Jpn J Ophthalmol 2005; 49(3): 220-2.
[http://dx.doi.org/10.1007/s10384-004-0182-8] [PMID: 15944827] ]. Our patient had no history of alcohol abuse or malnutrition making this diagnosis less likely. PNS is an extensive group of disorders that may affect any part of the nervous system and in rare cases can cause vertical nystagmus [7Barata PC, Morgado J, Sousa AP, et al. Breast cancer presents with a paraneoplastic neurologic syndrome. Case Rep Oncol 2012; 5(3): 616-21.
[http://dx.doi.org/10.1159/000345692] [PMID: 23275775] ]. However, we do not consider this diagnosis probable due to the fast clinical restitution after lithium discontinuation, and test for paraneoplastic autoantibodies was negative.

Lamotrigine toxicity is recently reported to be a rare cause of DBN, and lamotrigine´s half-life is extended when used with valproate [8Alkawi A, Kattah JC, Wyman K. Downbeat nystagmus as a result of lamotrigine toxicity. Epilepsy Res 2005; 63(2-3): 85-8.
[http://dx.doi.org/10.1016/j.eplepsyres.2004.11.004] [PMID: 15716057] ]. Our patient was treated uneventfully with both for a long time and DBN presented only as lithium was added. As levels of valproate and lamotrigine were slightly above therapeutic levels, we cannot rule out an additive toxic effect of lamotrigine, though.

DBN with horizontal gaze palsy is a rare condition, and lithium side effects should be considered in lithium-treated patients presenting with DBN, especially if no other metabolic or structural lesion of the brain is identified.