In this technique, we use easily available materials (mainly a Nelaton tube) to make an injector for loading DSAEK lenticule and also easily pulling it (using a gauge 23 needle) into the eye. In this paper, we report outcomes of this technique in four cases.

We proposed a novel effective user-friendly and affordable technique to perform DSAEK.

In the present study, we aim to describe an inexpensive modification to simplify lenticule delivery and minimize iatrogenic injury in a series of patients.

Herein, we report four consecutive cases of bullous keratopathy undergoing DSAEK procedure Table 1. Cases 1-3 underwent DSAEK in pseudophakic bullous keratopathy. A combined artisan Intraocular Lens (IOL) implantation and DSAEK was performed for case 4 because of Aphakic Bullous Keratopathy (ABK). Actually, that patient experienced a staphylococcal keratitis in the background of ABK. After administration of fortified cefazolin, his vision was counting fingers at 1meter at the time of scar formation. DSAEK procedure was done two months later.

After marking superficial cornea with an 8-mm trephination, the endothelial layer is stained via trypan blue through a temporal corneal incision. Afterward, a 360o descemetorhexis is fashioned along the trephination mark. Upon preparing the DSAEK lenticule, it is placed unfolded within a Nelaton catheter, cut using a Westcott scissor. It is preferred to create a beveled edge at the tip of the catheter to facilitate the introduction of lenticule into the AC Fig. (1a 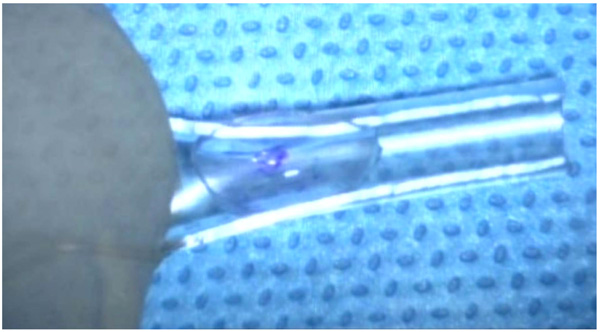 ). In the following steps, an AC maintainer is fixed from a vertical corneal incision to provide a formed AC during donor’s tissue delivery. The perpendicular intrastromal channel for the inflow, prevent disturbance of the lenticule by the tip of the instrument. Later, a clear corneal incision is made at nasal side opposite to the 5mm incision. The beveled tip of the catheter is inserted in the AC through the temporal incision and by means of a 23-gauge needle from the opposite nasal port; the lenticule is pulled in to the AC Figs. (1b 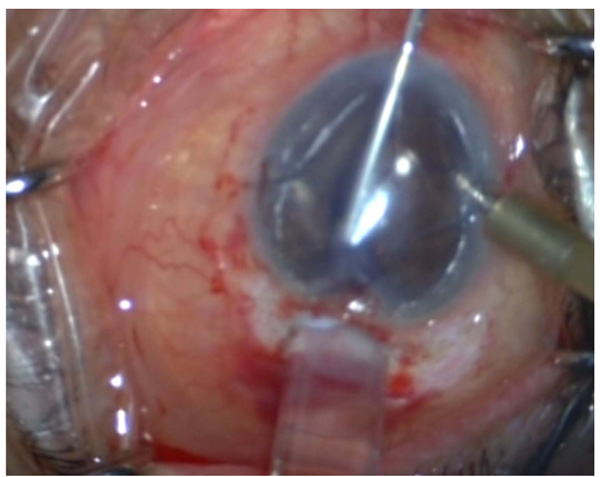 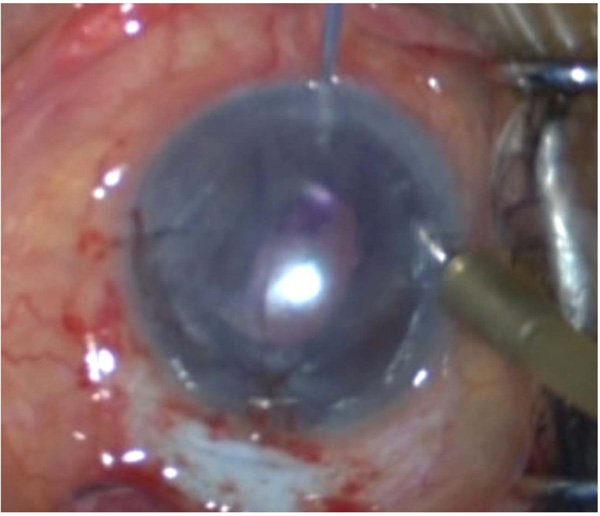 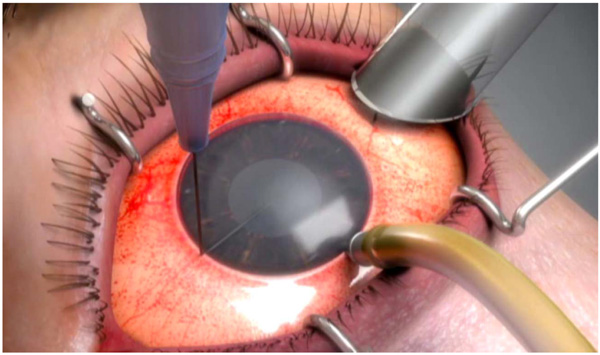 ) presents a schematic view of pulling the lenticule into the eye.Finally, an air bubble is injected to the AC to maintain the lenticule position and the temporal incision is closed by 10-0 nylon sutures.

All grafts remain clear after six months. Table 1 shows ECD at different follow-ups, as the table shows mean ECD loss after six months was 26%. We documented an ECD loss of 30% at sixth month in case 4 that underwent combined artisan IOL implantation and DSAEK, however, the cornea was clear with a best corrected visual acuity of 20/30.

In the current study, we introduced a new modification to DSAEK procedure using a device for lenticule delivery which is easily prepared intra-operatively. We believe that using this new technique, the iatrogenic trauma by the forceps during tissue grasping or during taco technique, could be reduced.

In 2007, Bradley and McCartney introduced a new technique for lenticule delivery using a double armed 10-0 Prolene suture which was applied on the apex of the donor’s tissue. It was claimed that with suture-dragging, the lenticule positioning is simplified [8Bradley JC, McCartney DL. Descemet’s stripping automated endothelial keratoplasty in intraoperative floppy-iris syndrome: Suture-drag technique. J Cataract Refract Surg 2007; 33(7): 1149-50.
[http://dx.doi.org/10.1016/j.jcrs.2007.03.043] [PMID: 17586368] ]. However, it is debated that further graft damage may ensue including the cheese-wiring of the sutures during dragging and subsequently the need for manipulation by the forceps. In addition, it seems that the surgery is prolonged by suture-drag technique [9Aralikatti A, Dean S, Busin M, Shah S. Pull-through technique for graft insertion in DSAEK. J Cataract Refract Surg 2008; 34(3): 341.
[http://dx.doi.org/10.1016/j.jcrs.2007.10.038] [PMID: 18299041] ].

The pull-through technique discussed by Aralikatti et al. or using Busin glide is somehow similar to ours. They used a forcep for the insertion of graft tissue from a glide [9Aralikatti A, Dean S, Busin M, Shah S. Pull-through technique for graft insertion in DSAEK. J Cataract Refract Surg 2008; 34(3): 341.
[http://dx.doi.org/10.1016/j.jcrs.2007.10.038] [PMID: 18299041] ]. Our modification differs regarding the usage of widely available instruments in operation rooms and considering the fact that the small tip of 23-gauge needle is potentially the only surface that touches the lenticule. The decrease in ECD after six months was 26% in our proposed technique that was similar to Busin glide .

In conclusion, we postulate a new easy and affordable method to load and introduce the DSAEK lenticule into the AC. We need more studies to see if iatrogenic injury would be significantly mitigated resulting in better outcomes and longer graft survival.

The study protocol was approved by the local Ethical committee of Farabi Eye Hospital.

All participants provided written informed consent before any study procedure or examination was performed.