We describe three eyes of two cases of severe degeneration of the macula following vitrectomy with indocyanine green-assisted internal limiting membrane peeling for idiopathic macular hole. We need to remember the possibility of these complications and have to select the procedures that are safest to use for macular hole surgery.

We report two cases of idiopathic macular holes which developed extensive macular degeneration with hyperplasia of the retinal pigment epithelium in the ILM peeled area, although the macular holes were successfully closed.

A 63-year-old woman had a stage III macular hole in the right eye and a stage IV in the left eye (Fig. 1

). She had 6 months history of decreased vision in her right eye and 2 months in her left eye. Her corrected visual acuity was 20/50 OD and 20/30 OS. Phacoemulsification and aspiration, intraocular lens implantation, and vitrectomy were performed on the right eye followed by the left eye. The ILM was stained with 0.5% ICG, and a three to four disc diameter area of ILM was peeled and removed. The initial flap for peeling the ILM was created on the temporal side in each eye. Then 1.0 ml of pure SF6 gas was injected to tamponade the retina. The patient maintained a prone position for 24 hours on the first postoperative day and only during the day on the following 7 days.


One week after the surgery, the macular holes were confirmed to be closed (Fig. 2

). However, degenerative changes developed in the macula about 2 weeks after the surgery, especially on the temporal side of the fovea in both eyes. A yellow, round degenerative lesion was noted in the fovea, and irregular degenerative foci associated with pigment deposits were found just temporal to the lesion. The changes were more marked in the right eye (Fig. 3a

). The surgical procedures and clinical course of left eye was similar to the right eye.

These pathological changes did not progress, but the visual acuity decreased to 20/60 in the right eye and 20/40 in the left eye at 6 months after surgery.

A 55 year-old woman had a stage IV macular hole in her left eye (Fig. 5a

). She had 2 months history of decreased vision in her left eye. Her corrected visual acuity was 20/20 OD and 20/60 OS. Phacoemulsification and aspiration, intraocular lens implantation, and vitrectomy were performed. After injecting 0.5% ICG to stain the ILM, a 3 disc diameter area of the ILM was peeled and 0.1 ml of pure SF6 gas was injected. The initial flap of ILM was created from the temporal side of the fovea, and it took about one minute to peel the ILM. The patient maintained a prone position on the same schedule as Case 1. The macular hole was closed 1 week after the surgery (Fig. 5b

), however hyperpigmentation developed around macular hole and round degenerative changes were noted within the area of the peeled ILM about 2 weeks after the surgery (Fig. 6 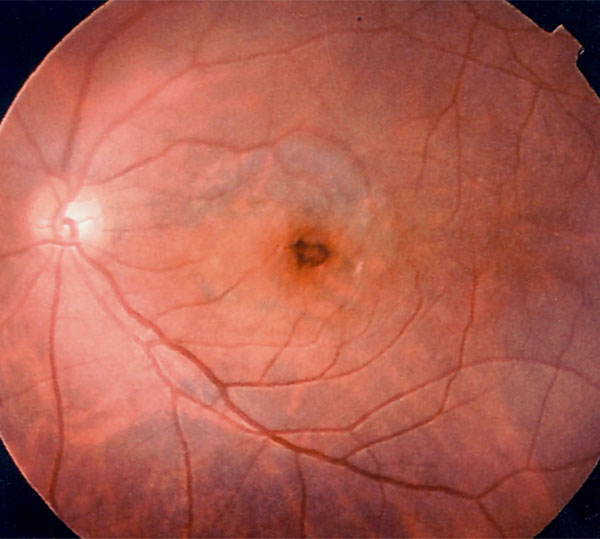 ). FA revealed areas of hypofluorescein or a blockage of the fluorescein as seen in Case 1. (Fig. 7a 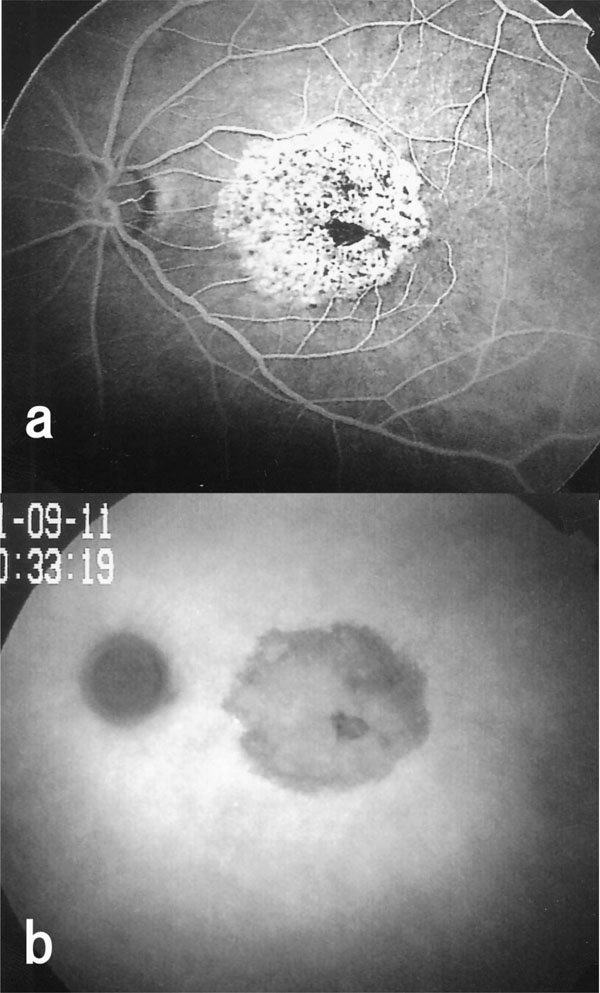 ) Indocyanine green angiography (ICGA) showed hypofluorescein in the area where the ILM was peeled (Fig. 7b

Written informed consent was obtained to use ICG during surgery from both cases.

Pigment epithelial cell degeneration in the macula is a relatively rare complication of macular hole surgery with a frequency of 2% to 75% [5Park SS, Marcus DM, Duker JS, et al. Posterior segment complications after vitrectomy for macular hole Ophthalmology 1995; 102: 775-81.-7Poliner LS, Tornambe PE. Retinal pigment epitheliopathy after macular hole surgery Ophthalmology 1992; 99: 1671-77.]. It is generally believed that retinal pigment epithelium damage is caused by surgical trauma during the creation of the initial flap in the ILM and from the abrasive suctioning on the floor of macular hole. Sivalingam et al. [13Sivalingam A, Eagle RC Jr, Duker JS, et al. Visual prognosis correlated with the presence of internal limiting membrane in histopathologic specimens obtained from epiretinal membrane surgery Ophthalmology 1990; 97: 1549-52.] reported that the visual prognosis was poorer and the recurrence of an epimacular membrane was higher in eyes where ILM components were found in the epimacular membrane removed during vitreous surgery than in eyes where ILM components were not found. It was also reported that postoperative cellular proliferation occurred around the edges of the peeled ILM [14Mittleman D, Green WR, Michels RG, de la Cruz Z. Clinicopathologic correlation of an eye after surgical removal of an epiretinal membrane Retina 1989; 9: 143-7.]. Tognetto et al. [3Tognetto D, Grandin R, Sanguinetti G, et al. Internal limiting membrane removal during macular hole surgery – Results of a multicenter retrospective study Ophthalmology 2006; 113: 1401-0.] reported that better visual improvement was obtained when the macular hole was closed without ILM peeling. Taken together, these findings suggest that ILM peeling may have some adverse effects on the retina.

We peeled the ILM, used relatively high concentration of ICG, and used SF6. These 3 factors, individually or in combination, might have caused the macular degeneration in our cases. But the contact of the SF6 with the macula was for only a relatively short time compared with reported cases in the literature [6Banker AS, Freeman WR, Kim JW, Munguia D, Azen SP. Vision-threatening complications of surgery for full thickness macular holes Ophthalmology 1997; 104: 1442-53., 7Poliner LS, Tornambe PE. Retinal pigment epitheliopathy after macular hole surgery Ophthalmology 1992; 99: 1671-77.] and other cases in our institution. Therefore, the SF6 tamponade was most likely not the cause of the macular degeneration in our cases.

ICG staining makes the ILM more visible, and ICG-assisted ILM peeling was performed after creating a posterior vitreous detachment during the macular hole surgery. The ILM was removed easily within one minute because of its visibility. To reduce potential light toxicity, the intraocular fiber optic observation light was directed as far away as possible from the macular hole.