Background: Frequency doubling technology (FDT) perimetry measures contrast sensitivity. The magnocellular component of ganglion cells in human retina is isolated as a whole by the FDT stimulus. The aim of this study is to investigate the role of Humphrey Matrix threshold testing in the detection of early functional retinal impairment in ocular hypertensive patients compared to standard automated perimetry (SAP).

Conclusions: FDT showed to be more sensitive and specific than SAP mostly in detection of early visual field impairment in ocular hypertensive patients.

open-access license: This is an open access article distributed under the terms of the Creative Commons Attribution License (http://creativecommons.org/licenses/by-nc/3.0/), which permits unrestrictive use, distribution, and reproduction in any medium, provided the original work is properly cited. 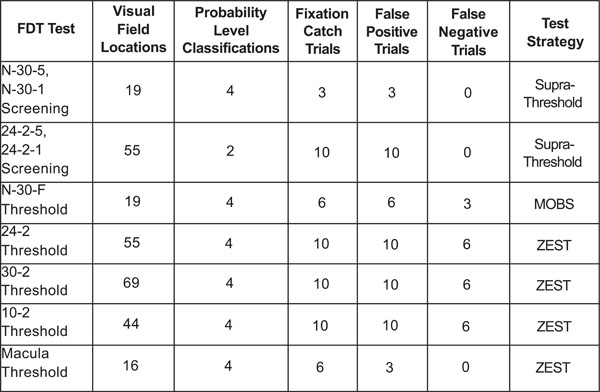 ). The Glaucoma Hemifield Test (GHT) is available for the FDT 24-2 and 30-2 tests. Recent papers studied the learning effect of Matrix FDT and the Authors stressed that it may affect only the first test [4Centofanti M, Fogagnolo P, Oddone F. Learning effect of Humphrey matrix frequency doubling technology perimetry in patients with ocular hypertension J Glaucoma 2008; 17(6 ): 436-1.] rather than standard automated perimetry (SAP). Some years ago, the Ocular Hypertension Treatment Study (OHTS) started in the U.S.A. to evaluate the safety and efficacy of topical ocular hypotensive medication in preventing or delaying the onset of visual field loss and/or optic nerve damage in subjects affected by ocular hypertension at moderate risk for developing open-angle glaucoma (OAG) [5Gordon MO, Kass MA. The ocular hypertension treatment study: design and baseline description of the participants Arch Ophthalmol 1999; 117 (5 ): 573-83.]. In U.S.A. it is estimated that 3 to 6 million people, including 4% to 7% of the population older than age 40 years, have elevated intraocular pressure (IOP) without detectable glaucomatous damage using current clinical tests

The 2% ibopamine test was performed according to Virno et al. [16Virno M, Pecori-Giraldi J, Taverniti l, et al. Intraocular hypertensive effects of topically administered ibopamine in eyes with hy-drodynamic disorders: provocative test for glaucoma Glaucoma 1990; 12: 88-92.-18Giuffre’ I, Taverniti L, Di Staso S. The effects of 2% ibopamine eye drops on the intraocular pressure and pupil motility of patients with open-angle glaucoma Eur J Ophthalmol 2004; 14, 6: 08-13.]. 2% ibopamine (Trazyl®, Angelini Acraf, Pomezia, Rome, Italy) stimulates α-adrenergic receptors and D1-dopaminergic receptors in the eye. This pharmacological and provocative test is positive if, after 45 minutes after the instillation of ibopamine eye drops, IOP increases by at least 3 mmHg. All the ibopamine tests were performed at the same time, even if the increase of the IOP is absolutely independent of the time of day and of the baseline IOP (IOP measured before the instillation of ibopamine eye drops). This provocative test is widely used in Italy and sometimes may be more useful than others such as the water-drinking test [19Vetrugno M, Sisto D, Trabucco T, et al. Water-drinking test in pa-tients with primary open-angle glaucoma while treated with differ-ent topical medications J Ocul Pharmacol Ther 2005; 21 (3 ): 250-7.]. All hypertensive patients were divided in two groups: ibopamine positive (IBO+) and ibopamine negative (IBO-). All patients were classified by Scoring Tool for Assessing Risk (S.T.A.R. I and II version) [20Gordon MO, Torri V, Miglior S, et al. Ocular hypertension treatment study group, European glaucoma prevention study group, validated prediction model for the development of primary open-angle glaucoma in individuals with ocular hypertension Ophthalmology 2007; 114(1 ): 10-9.]. According to the Ocular Hypertension Treatment Study and the European Glaucoma Prevention Study (E.G.P.S.) these predictive parameters were identified as: age, IOP, central corneal thickness (CCT), vertical cup-to-disc ratio, and Humphrey visual field pattern standard deviation. This method, in both versions I and II, gives a percentage of probability of conversion from OH to glaucoma. In this way, it gives some information that the clinician may use to make a decision about diagnosis and mostly about therapy and follow-up. Statistical analysis was performed by descriptive statistics, analysis of variance (ANOVA), Bland-Altman method and Spearman analysis. 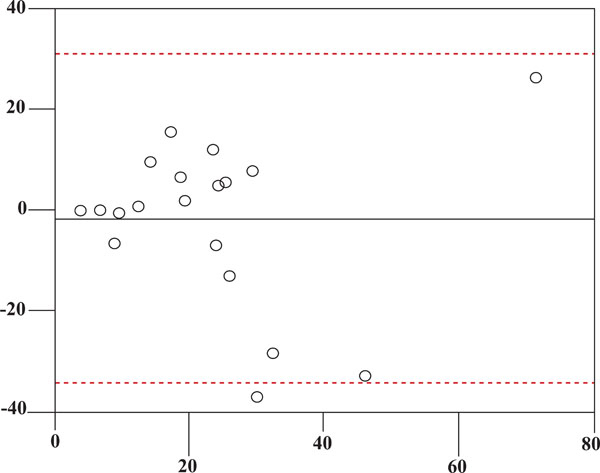 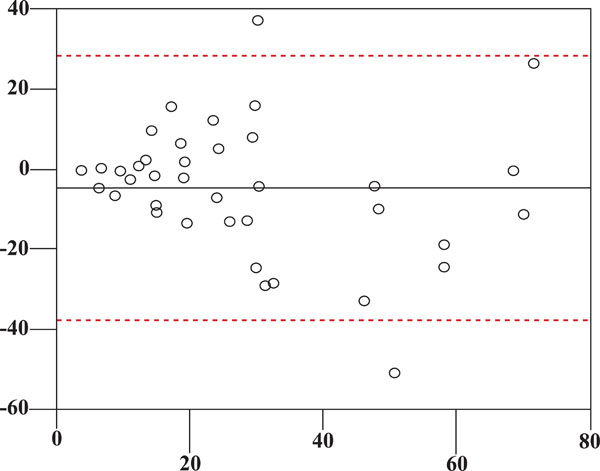 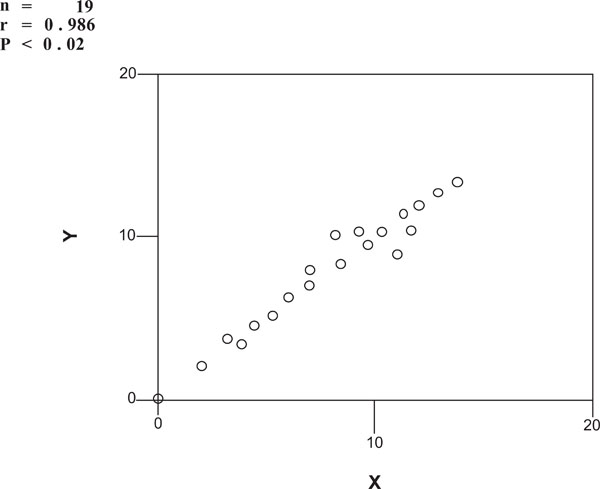 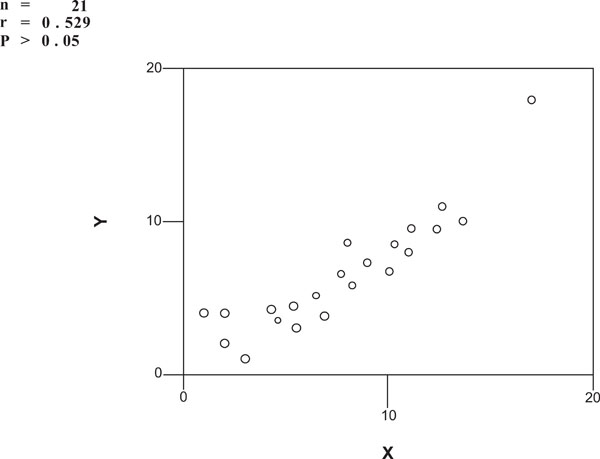 ). In the whole population studied, only one patient (I.C., male, 45 years old), belonging to the IBO + group, had a conversion from ocular hypertension to open-angle glaucoma during follow-up and started a monotherapy by beta-blocker in both eyes. All the other subjects from both groups (IBO + and IBO -) remained stable during follow-up without any therapy and visual field abnormalities.

We studied a small but homogeneous cohort of hypertensive patients. This cohort of subjects is sex- and age-matched. No statistical difference was evaluated as for pachymetry, S.T.A.R. I and II scores. The HR Pentacam is a very useful tool in evaluating pachymetry very precisely either in normal population, in OH and glaucoma subjects and in refractive surgery patients. Only in ibopamine negative group we found a statistical significant correlation between FDT and SAP visual field testing. This new pharmacological and provocative test (ibopamine test) is very interesting and useful in evaluating the possibility to convert from OH to glaucoma, also in relatives of glaucoma patients [21Pecori-Giraldi J, Damiano A, Gabrielli A, et al. Ocular hypertension induced by ibopamine early discloses glaucoma suspects among relatives of glaucomatous patients Boll Ocul 2002; 81: 91-0.]. It is very easy to use and allows a very important non-cycloplegic mydriasis, useful also in diagnostic testing of outflow impairment. It is safe. In Literature there are no significant side-effects described. In OH subjects, such as in normal tension glaucoma, its positivity is about 52%. We can speculate that, as in Weinreb’s glaucoma continuum [22Weinreb RN, Friedman DS, Fechtner RD, et al. Perspective.Risk assessment in the management of patients with ocular hyperten-sion. Am J Ophthalmol 2004; 138: 458-67.] and from genetical point of view, OH is just a step towards open-angle glaucoma and like a “relative” of normal tension glaucoma. As we know that Humphrey Matrix threshold testing selectively stimulates the magno-cellular component of ganglion cells (3), we underline that this diagnostic tool, associated with ibopamine test, can be useful for the identification of early visual field impairment in ocular hypertensive subjects, suggesting a possible conversion from OH to open-angle glaucoma [23De Gregorio F, Pecori-Giraldi J, De Stefano C, Virno M. Correlation between ocular hypertension induced by ibopamine and perimetric defect in primary open-angle glaucoma Eur J Ophthalmol 1997; 7: 152-5.]. It may be also useful in the follow-up of glaucoma patients even if SAP remains the gold standard of our public and private offices.