A 25-year-old male underwent bilateral Intacs implantation for the management of keratoconus and hardcontact-lens intolerance (stage 1) in 1999.

Nine years after bilateral Intacs implantation for the management of early stage keratoconus, there was a significant improvement and postoperative stability in patient’s visual acuity. No long-term, sight-threatening complications were identified during follow-up.

Corneal ring segment implantation was the first non-laser, and tissue-saving procedure approved by the Food and Drug Administration (FDA) of the United States for the correction of myopia. Its capability to flatten the central part of cornea was also evaluated for keratoconic eyes which demonstrate an abnormal corneal surface, which in turn influences the visual performance of patients. The use of intra-corneal ring segments for the management of keratoconus has demonstrated satisfactory results, since in the majority of the patients improvement in uncorrected (UVA) and best corrected (BSCVA) visual acuity has been documented [5Colin J, Malet FJ. Intacs for the correction of keratoconus: two-year follow-up J Cataract Refract Surg 2007; 33: 69-74., 6Kymionis GD, Siganos CS, Tsiklis NS, et al. Long-term follow-up of intacs in keratoconus Am J Ophthalmol 2007; 143: 236-44.].

A 25-year-old male underwent bilateral intrastromal corneal ring segments (Intacs) implantation in both eyes for progressive keratoconus stage 1 [7Krumeich JH, Daniel J, Knulle A. Live-epikeratophakia for keratoconus J Cataract Refract Surg 1998; 24: 456-63.] (keratoconus stage 1 is defined as: eccentric corneal steepening, induced myopia and/or astigmatism < 5D, Corneal radii < 48D and Vogt’s striae with no scar formation) and hard-contact-lens intolerance in 1999 (the patient was referred to our institute for progressive keratoconus, decrease in visual acuity and corneal topographic changes). Systemic history was unremarkable. Preoperative examination included uncorrected visual acuity (UCVA), best spectacle corrected visual acuity (BSCVA), manifest and cycloplegic refraction, intraocular pressure (IOP), corneal topography (EyeSys Technologies, Houston, Texas, USA), pachymetry of central and peripheral cornea and slit-lamp microscopy. UCVA was 20/50 in the right eye and 20/200 in the left eye. BSCVA was 20/20 with refraction of 0.00 –1.50 x 65 in the right eye and 20/25 with refraction of –1.25 –2.25 x 120 in the fellow eye. Intraocular pressure was 12 mmHg in both eyes. Keratometric values were 44.00/43.38 D at the right eye and 45.30/44.29 D at the left eye (Fig. 1

). Central corneal thickness was 509μm and 532μm in the right and the left eye, respectively. Ophthalmic examination showed no other anterior or posterior segment abnormalities.


The surgical procedure was conducted under sterile conditions and topical anesthesia with proxymetacaine hydrochloride 0,5% eyedrops (Alcaine, Alcon Labs). The corneal center was marked by indentation of the epithelium with a Sinskey hook and it was based on the center of the pupillary aperature. The entrance incision was placed at the topographic steep axis. The corneal thickness was measured intraoperatively at the incision site and peripherally in the cornea along the ring placement markings with ultrasonic pachymetry (Sonogage, Cleveland, Ohio, USA). Using a diamond knife, set at 70% of the thinnest corneal measurement, a 0.9-mm radial incision was formed at 410μm and 420μm of the right and the left eye respectively, and two intrastromal corneal pockets were created using two Sinskey hooks and a Suarez spreader. Two Intacs segments of 0.45-mm thickness were inserted maintaining a space of approximately 2.0 mm between their ends and 1.5 mm between the opposite edge of each segment and the edge of the incision. The incision site was sutured using a single 10/0 nylon stitch. The sutures were removed two weeks after surgery. 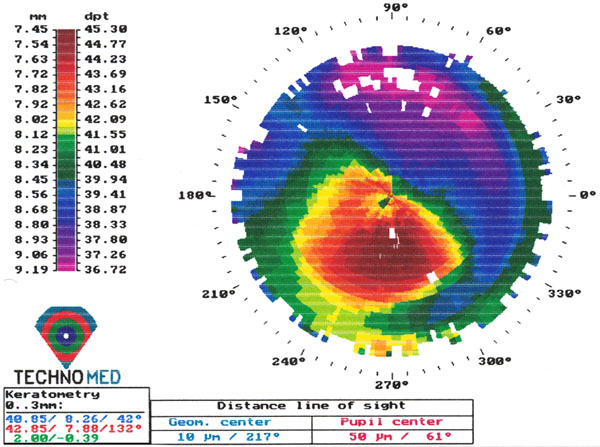 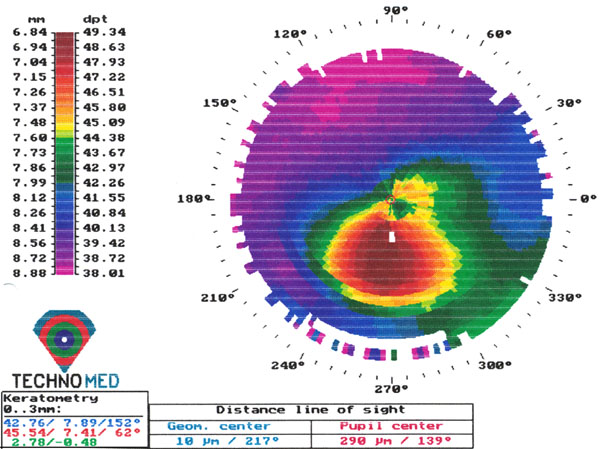 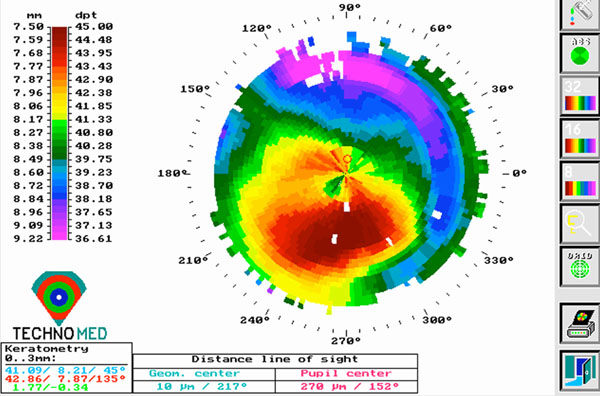 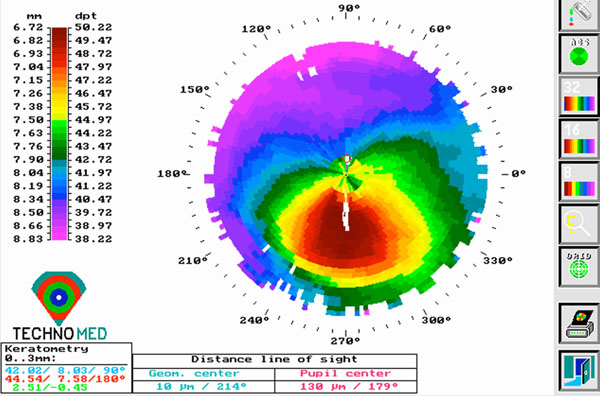 ). Slit-lamp examination revealed deposits in the lamellar channel around the segments of both eyes (Fig. 6

Central corneal images revealed with confocal corneal microscopy normal epithelial cells, regular subbasal and subepithelial nerve plexus, bright keratocyte’s nuclei against the darker background of the acellular part in the stroma, and normal endothelial cells. Corneal images adjacent to the segments showed normal epithelial structure and subepithelial nerve plexus. When focused on the top of the stromal tunnel, excessive scattering was observed along with dark abnormal lines adjacent to the channel (Fig. 7A

), while deeper images exhibited a highly reflective interface as well as oval shaped particles of various sizes and stretched keratocytes (Fig. 7B

Even though, intra-stromal corneal ring segments (Intacs, Addition Technology, Inc, Fremont, California, USA) were designed at first to correct low myopia by flattening central corneal curvature [8Schanzlin DJ, Asbell PA, Burris TE, Durrie DS. The intrastromal corneal ring segments: Phase II results for the correction of myopia Ophthalmology 1997; 104: 1067-78.], they were later used as a treatment modality for keratoconus. There are many studies in the literature demonstrating pleasing results concerning the refractive outcomes post segment implanation; while there is a report on a ten-year follow up of 360o intra-stromal corneal rings for myopia indicting satisfactory refractive outcomes [9Schwartz AP, Tinio BO, Esmail F, et al. Ten year follow up of 360° intrastromal corneal rings for myopia J Refract Surg 2006; 22: 878-3.], there is no documentation of a nine year follow up for the management of keratoconus.

Two years after intacs implantation, the patient had improved UCVA in both eyes. Nine years postoperatively, refractive and topographic stability was observed in comparison with two years’ follow-up findings. Slit-lamp examination revealed deposits in the lamellar channel around the temporal segment of the right eye but no long-term, sight-threatening complications due to Intacs implantation.

A major limitation of this case report is that the patient presented suffered from early stage keratoconus (stage 1). Keratoconus stage may affect Intacs outcomes and the refractive results that our patient achieve nine yeas post operatively, may not be extrapolated to all keratoconic patients. Another limitation is that the patient presented here underwent bilateral treatment; therefore we may not conclude that ring implantation inhibited the progression of keratoconus. Furthermore, stage 1 keratoconus may be stable in time independently to intacs implantation; therefore the stabilization of the ectatic corneal disorder in this patient may not be attributed to the intacs.

In conclusion, we present the outcome of a keratoconic patient nine years after bilateral Intacs implantation for the management of mild keratoconus. There was significant improvement and postoperative stability in patient’s visual acuity without long-term, sight-threatening complications.

The authors have no financial or proprietary interest in any materials or methods described herein.

Dr. George D. Kymionis has received for the academic year 2009, a scholarship of 15000 euro from the ‘Hellenic society of intraocular implants and refractive surgery’ as an economic aid for a fellowship program.

IGP: Head of the department, revision of manuscript.