Anti-vascular endothelial growth factor agents are frequently used to treat a variety of ocular neovascular diseases. While agents like bevacizumab and ranibizumab appear to be safe and effective, there have been reports of severe intraocular inflammation as well as sustained elevation of intraocular pressure (IOP) after single or multiple intravitreal injections of these protein-based therapeutics. The true mechanism leading to inflammation and/or sustained spikes in IOP remains unknown. We report a patient with sustained IOP elevation and kerato-precipitates on the trabecular meshwork after multiple injections of both bevacizumab and ranibizumab. We propose that monomer antibodies, aggregated proteins, or other high molecular weight molecules might lead to inflammation in the trabecular meshwork and subsequent elevation in IOP.

A 66 year old male with exudative age-related macular degeneration (AMD) in his right eye and non-exudative AMD in his left eye was referred to our tertiary care center for treatment. The patient’s ocular history prior to being seen by our retina service was significant for bilateral pseudophakia followed by subsequent laser capsulotomies for bilateral posterior capsular opacification. Over the course of his care, he received three injections of bevacizumab (Avastin, Genentech, Inc., San Francisco, CA) and eighteen injections of ranibizumab (Lucentis, Genentech, Inc., San Francisco, CA). Previous IOP levels in both eyes were stable in the mid-teens for two years prior to presenting to our clinic. The patient was followed over the next four years and received injections of either ranibizumab or bevacizumab in the right eye at intervals between 4 and 12 weeks. He was noted to have occasional elevations in IOP up to 20-21 mm Hg, in his right eye, over the first three years of treatment. The left eye IOP remained stable in the low to mid teens. After 12 intravitreal injections, the patient began to have fluctuations in right eye IOP ranging from 22-26 mm Hg. Upon examination twelve weeks after the eighteenth injection of ranibizumab, the patient was found to have an IOP of 32 mm Hg on the right side. He was started on brimonidine three times a day and referred to the glaucoma service the next day. Upon follow-up examination, the patient’s IOP was found to have decreased to 22 mm Hg and gonioscopic examination demonstrated what appeared to be kerato-precipitates on the trabecular meshwork (Figs. 1A 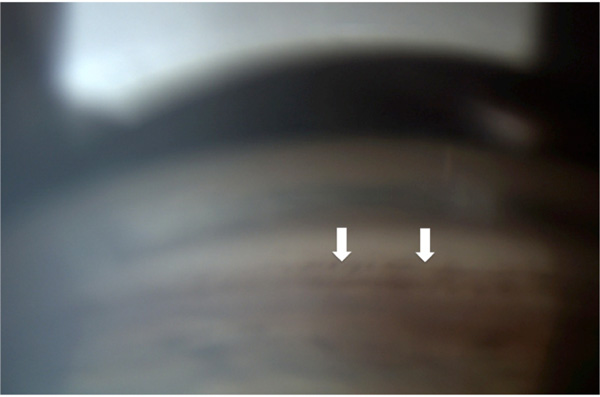 ). Brimonidine was stopped and the patient was started on prednisolone acetate 1% four times a day. The IOP decreased to 18 mm Hg three days later. While the anterior chamber was initially devoid of any inflammatory cells, slight cell and flare appeared on subsequent follow up examinations and then faded with the continued topical steroid therapy. Subsequent work-up for uveitis was negative. The IOP remained low over subsequent visits without use of topical pressure lowering drops and the kerato-precipitates resolved. The patient has been weaned off of the steroid drops without recurrence of inflammation or IOP spikes and we have avoided further use of anti-VEGF agents.

With widespread use of intravitreal anti-VEGF therapy for a variety of ophthalmic diseases, cases of sustained elevation of IOP are beginning to emerge [4Jalil A, Fenerty C, Charles S. Intravitreal bevacizumab (Avastin) causing acute glaucoma: an unreported complication Eye 2007; 21: 1541-0.-6Carver J, Bouska C, Corey R. Avastin and risk of glaucoma Retina Congress, September 30th-October-4th, 2009, NY, (Abstract) ]. Both bevacizumab, a 149 kDa full-length antibody and, ranibizumab, a 48 kDa antibody fragment, are known to diffuse into the anterior chamber, where they persist for some time prior to exiting through the aqueous outflow system [8Bakri S, Synder M, Reid J, et al. Pharmacokinetics of intravitreal ranibizumab (Lucentis) Ophthalmology 2007; 114: 2179-82., 9Krohne TU, Eter N, Holz F, Meyer C. Intraocular pharmacokinetics of bevacizumab after a single intravitreal injection in humans Am J Ophthalmol 2008; 146: 508-12.]. Previously published reports, have suggested that the increased IOP following intravitreal bevacizumab may be, at least in part, secondary to a physical blockage of the outflow system by the anti-VEGF agents. Blockade of the trabecular meshwork outflow system from bevacizumab monomers and fab fragments of ranibizumab is unlikely to be the true reason behind this phenomenon due to the low incidence of reported spikes in IOP. It may be that protein-based therapeutics can occasionally be altered in some way to cause protein aggregation with subsequent blockade of aqueous egress. Another possibility is that contaminants, such as silicone oil from the syringe barrel or rubber stopper, could lead to obstruction of the outflow system [10Bakri SJ, Ekdawi NS. Intravitreal silicone oil droplets after intravitreal drug injections Retina 2008; 28(7): 996-1001.]. These theories remain speculative at this point.

Significant inflammatory reactions, even after previous uneventful injections are known to occur following the intravitreal injections of bevacizumab [11Georgopoulos M, Polak K, Prager F, et al. Characteristics of severe intraocular inflammation following intravitreal injection of bevacizumab (Avastin) Br J Ophthalmol 2009; 93: 457-62.]. It is also well known and characterized that aggregated proteins, especially multimers in excess of 100kD, induce a much more vigorous immunologic response than their non-aggregated counterparts. Even small amounts of foreign protein aggregates induce a much stronger immune response than larger amounts of endogenous protein [7Rosenberg AS. Effects of protein aggregates: an immunologic perspective AAPS J 2006; 8(3): E501-7.]. The intraocular injection of foreign proteins may lead to an inflammatory reaction and subsequent trabeculitis and IOP elevation in some patients. This phenomenon, along with other possible coexisting factors such as mechanical blockage of the outflow system, suggests that patients should be followed closely for spikes in IOP that can lead to optic nerve damage. While the present case may illustrate a potential link between anti-VEGF injections and subsequent inflammation with IOP elevation, there remains no proof of definitive direct causal relationship for the observed phenomenon. In the case we report, the patient maintained a decrease in IOP after discontinuation of topical aqueous suppressants and initiation of topical steroid therapy. This may have implications for future antibody based therapeutics for ophthalmic diseases. More research is needed in this area to fully elucidate the mechanism of increased intraocular pressure following intravitreal bevacizumab and ranibizumab.

Malik Y. Kahook and Naresh Mandava have received research support from Genentech in the past.