A 33-year-old male with a long history of VHL associated tumors including benign cysts on liver, kidneys and cerebellum presented with multiple large retinal hemangioblastomas in his remaining right eye. We successfully treated a large peripheral hemangioblastoma with cryotherapy and a smaller equatorial lesion with thermal laser. However, significant macular thickening with moderate hard exudates were present due to an optic nerve lesion with extension towards the fovea (Fig. 1A 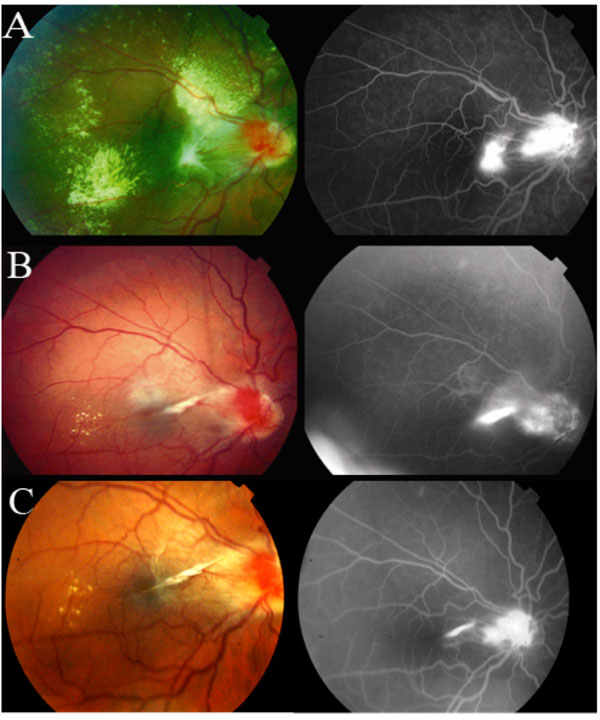 ). We treated the lesion with a total of 15 bevacizumab injections over a period of 60 months. Visual acuity (VA), appearance on fluorescein angiogram (FA), and optical coherence tomography (OCT) measurements were used as indicators of treatment success. VA was measured using a Reichert eye chart and was converted to visual acuity notation letters in Fig. (2 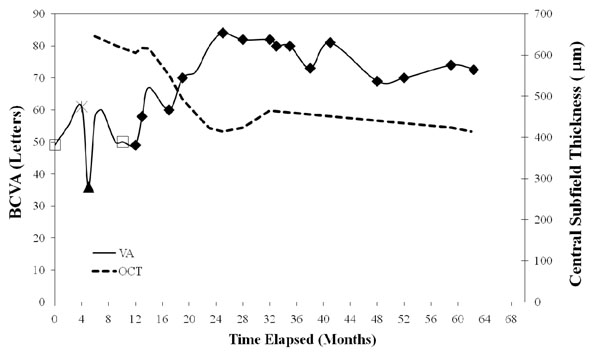 Baseline VA was 20/100. Due to worsening vision, continued leakage on angiography and macular thickening, the patient underwent treatment as outlined in Fig. (2

). At 12 months and after treatment with thermal laser therapy, cryotherapy and intravitreal kenalog, given the lack of biomicroscopic or angiographic response, the patient began receiving intravitreal bevacizumab (Avastin 1.25 mg in 0.05 cc) treatments at regular intervals. At 24 month follow up, VA improved to 20/30, the structural lesion stabilized and the exudates and edema resolved (Fig.1B

). The OCT showed only a partial improvement in thickness (646 um to 414 um) likely due to the presence of structural changes in the retina (Fig.3A 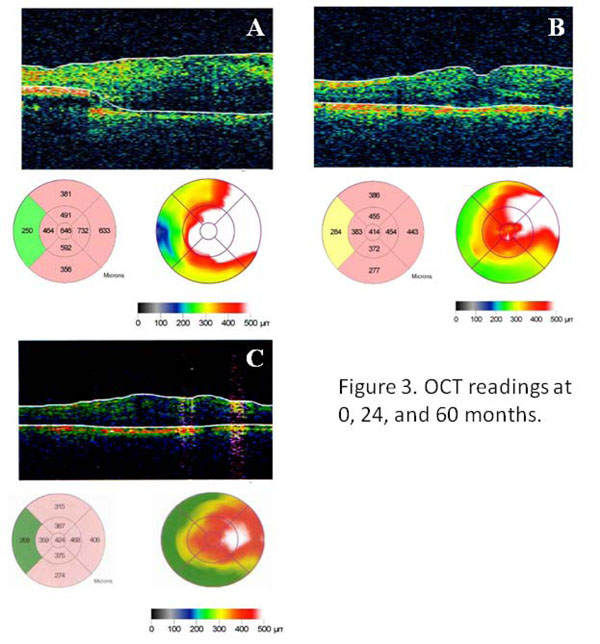 ). On final examination, after a follow up of 60 months and 15 total bevacizumab injections, VA showed minimal regression to 20/40 and remained markedly better than VA on presentation. The structural lesion remained stable and no new exudates or edema were appreciated (Fig.1C

). No systemic or ocular adverse events related to any of the treatments were noted.

Macular and optic nerve lesions due to VHL associated hemangioblastomas have generally been difficult to treat. As one of the major mechanisms of disease is due to the poor regulation of VEGF (among others) production, using a pan-VEGF blocker over the long term is both logical and potentially helpful. To our knowledge, this is the longest-term study involving pan anti-VEGF therapy to treat VHL. While it is difficult to compare the results between the other two studies using VEGF suppression by pegaptanib or semaxanib with the current single case study, it is instructive to note that even the best subject in Wong’s series (among the five total subjects) treated with pegaptanib did not achieve as significant a reduction in central macular thickness as our patient with bevacizumab did.

Wong et al. examined the effects of ranibizumab on five patients with VHL associated hemangioblastomas in a short- term case series with follow-up periods up to 61 weeks [8Wong WT, Liang KJ, Hammel K, et al. Intravitreal ranibizumab therapy for retinal capillary hemangioblastoma related to von Hippel-Landau disease Ophthalmology 2008; 115(11 ): 1957-64.]. They concluded that ranibizumab had minimal effects on most lesions but noted that efficacy was seen in their patient with the smallest lesion and the least exudation. Patients in their data set showed an average decrease of 9+/-20 letters. Conversely, our patient experienced an improvement in VA of 25 letters while our patient’s lesions initially improved then remained stable. Major differences between the two studies were the number of anti-VEGF injections administered and agent used; their patients had an average of 10.0 +/-3.1 injections of ranibizumab while our patient had 15 injections of bevacizumab. A single case study by Michels et al. also demonstrated slow regression of activity in hemangioblastoma lesions following ranibizumab treatment however follow-up was relatively short at 4 months and only involved 3 intravitreal injections.

Another probable benefit of intermittent bevacizumab treatment appears to be the suppression of new hemangioblastomas. This subject was carefully assessed for such tumors throughout his follow up, and did not develop any additional hemangioblastomas in the peripheral retina, on fundus contact lens examination as well as with angiography of the periphery. Wong et al. observed an additional lesion arising de novo in only one out of five patients [8Wong WT, Liang KJ, Hammel K, et al. Intravitreal ranibizumab therapy for retinal capillary hemangioblastoma related to von Hippel-Landau disease Ophthalmology 2008; 115(11 ): 1957-64.]. Documentation in the literature suggesting the untreated rate of new lesions arising does not explicitly exist. Chew described the course of several patients with ocular VHL disease who were not treated with anti-VEGF agents that developed additional peripheral lesions throughout their follow-up periods1. However, two patients that were treated with pegaptanib did not develop any new lesions during treatment or follow-up periods [1Chew EY. Ocular manifestations of von Hippel-Lindau disease: clinical and genetic investigations Trans Am Ophthalmol Soc 2005; 103: 495-511.].

Based on subjects with age-related macular degeneration, where treatment with bevacizumab often shows excellent results, it appears that a similar benefit may apply to treatment with bevacizumab in cases of VHL associated hemangioblastomas. The structural changes due to the development of these retinal hemangioblastomas include large cells containing intractoplasmic lipid inclusions, reactive glial cells, as well as tumorlet cells [10Chan CC, Daniel Collins AB, and Chew EY. Molecular pathology of eyes with von Hippel-Lindau (VHL) disease Retina 2007; 27: 1-7.]. Based on OCT findings, as well as clinical observation, it appears that VEGF suppression with bevacizumab does not appreciably affect these structural changes. Until more elegant solutions to VHL hemagioblastomas are developed, localized VEGF blocking therapy with bevacizumab (or ranibizumab) may be an interim solution for macular and optic nerve lesions.