Anomaly of the Deep Lateral Orbital Wall in Two Cases

The first patient was a 35 year-old woman who showed bilateral orbital inflammation from Graves’ orbitopathy, and underwent 2 cycles of steroid pulse therapy (1 cycle: methylprednisolone 10 mg/kg/day × 3 days). Although the inflammation subsided completely after the therapy, her Hertel exophthalmometry measurements remained 21 mm OU. Therefore, she hoped to have orbital decompressions to both orbits. We performed bilateral deep lateral orbital decompressions and her final Hertel measurements improved to 14 mm OD and 13 mm OS.

She demonstrated bilateral bone defects of the inferior part of the sphenoid door jamb without tumor invasion as shown by preoperative computed tomography (CT) (Fig. 1A 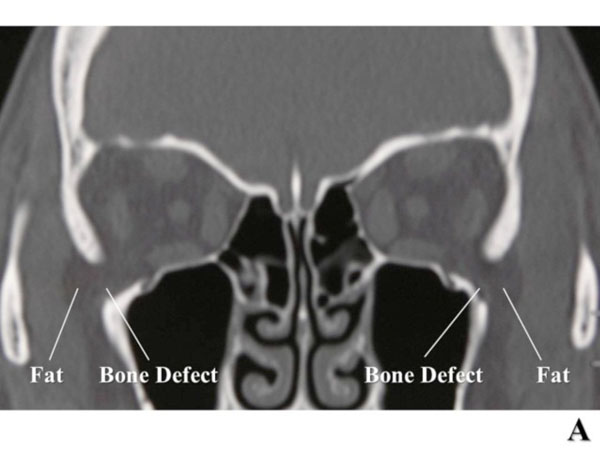 ). During the operations, the defects were clearly identified and no tumor invasion was found, consistent with CT. (Fig. 1B 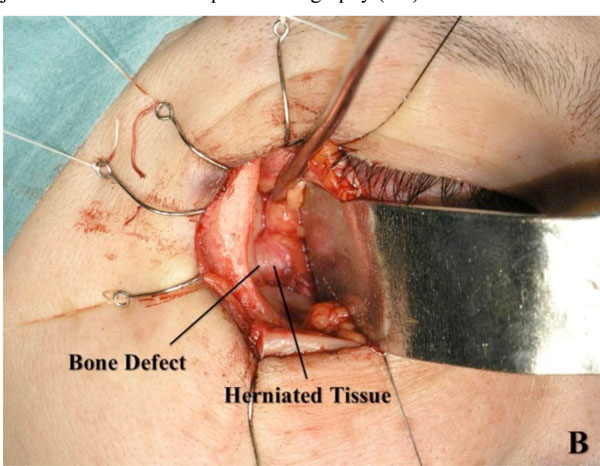 ). The bone defects continued to the inferior orbital fissure, and the orbital fat was herniated into the defect, continuing to the buccal fat.


The other patient was a 40 year-old woman who suffered from Graves’ orbitopathy with left orbital inflammation. She also underwent 2 cycles of steroid pulse therapy. The inflammation subsided completely, but her Hertel exophthalmometry measurements remained at 16 mm OD and 18 mm OS. She hoped to have a left orbital decompression. We performed a left deep lateral orbital decompression and her final left Hertel measurement was 15 mm.

She showed a cystic formation with a little fluid collection in the left lower part of the sphenoid door jamb as shown by preoperative CT (Fig.2A 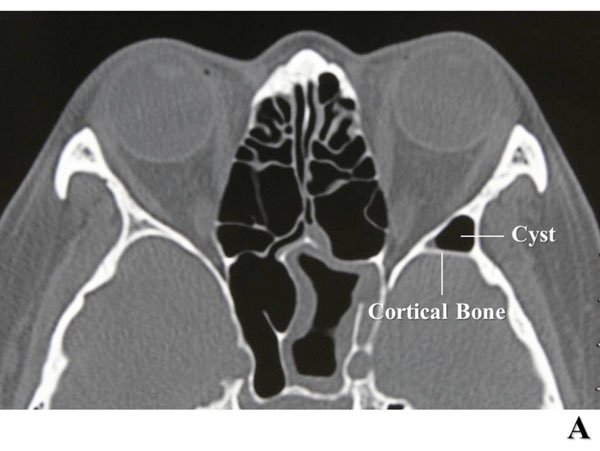 ). The cyst was separated by a thin cortical bone to the middle cranial fossa and it was filled with air without fluid. During the deep lateral orbital wall decompression surgery, the cyst was clearly identified, and the inner wall was lined by thin paranasal sinus mucosa. With enlarging the cyst and following it inferiorly, it was found to continue to the maxillary sinus (Fig.2B 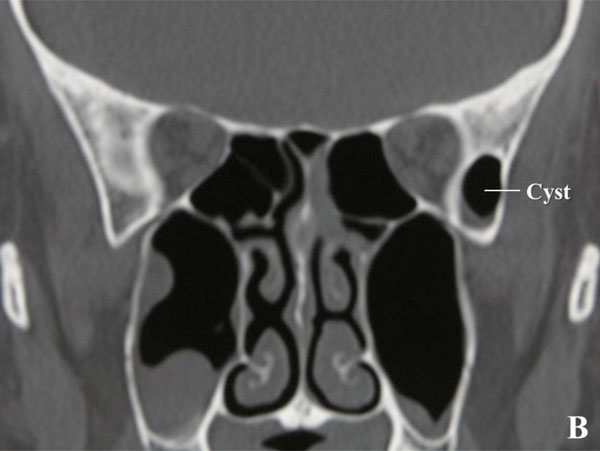 ). No osteolytic lesion was found in the operation. The cyst was an expansion of the maxillary sinus.

The second anomaly described above—an expansion of the maxillary sinus—enabled the present surgeon to perform a decompression surgery safely and efficaciously. Since the space was only divided by a thin cortical bone to the middle cranial cavity, maximum bone removal could be achieved by tracing the cortical bone superiorly with bone gliding.