A thick cornea is a constant ocular finding in the mesodermal dysmorphodystrophy (Weill-Marchesani Syndrome). In this study we investigated with confocal microscopy, the corneal structure in vivo in the patient affected by Weill-Marchesani Syndrome (WMS) in an attempt to explain the thickness increment. The corneal study showed in both eyes a highly increased central thickness with normal topography and sensitivity. The confocal examination revealed an increased evidence of keratocytes in the anterior stroma with abnormal and activated appearance. The mid and deep stroma and endothelial layer were normal. These confocal findings are a newly described feature of corneal involvement in WMS. The increase of the corneal thickness in the affected patient maybe associated with connective tissue alterations, such as abnormal collagen synthesis, that characterizes the disease.

In this study we have investigated the corneal structure by in vivo confocal microscopy, in a patient with WMS, in the attempt to explain the thickness increment. As to our knowledge this is the first report concerning corneal in vivo confocal examination in eyes with WMS.

We examined a 19-year-old male referred to the Cornea Unit of the Ophthalmology Clinic of the University of Messina, Messina, Italy, to undergo laser refractive surgery. The patient presented with short stature, high myopia, thick cornea (618 microns in the RE and 622 microns in the LE), shallow anterior chamber (2.75 mms and 2.55 mms respectively), small thick lens (5.0 mms and 4.9mms in the RE and LE), and short axial length (22.01 mms and 21.97 mms). On the basis of these findings the clinical diagnosis of WMS was posed. The patient was a soft contact lens wearer up to two month prior to the visit. 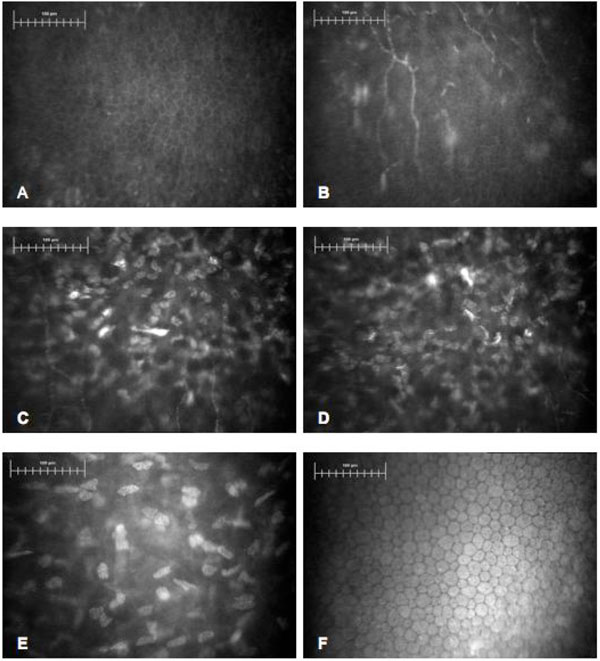 ); the mid and deep stroma were normal (Fig. 1E


Furthermore, we have examined 10 eyes of 10 age matched healthy subjects who were soft contact lenses wearers, to compare the confocal corneal findings. In this group the mean keratocyte density in the anterior stroma resulted to be 760.4 cell/mm2 and in the posterior stroma 563.6 cell/mm2 respectively (Fig. 2A

Ocular findings such as short axial length, shallow anterior chamber, and thick lens were already described in WMS as well as the excessive corneal thickness, the origin of which is unknown. The purpose of this study was to investigate the cornea in vivo, by confocal microscopy, in the attempt to identify the changes that might help to explain corneal features in WMS [2Razeghinejad MR, Hosseini H, Namazi N. Biometric and corneal topographic characteristic in patients with Weill-Marchesani syndrome J Cataract Refract Surg 2009; 35(6): 1026-8., 3Razeghinejad MR, Safavian H. Central corneal thickness in patients with Weill-Marchesani syndrome Am J Ophthalmol 2006; 142: 507-8.]. Confocal microscopy showed normal endothelium and deep stroma. The normality of the corneal endothelium, responsible for corneal hydratation and transparency maintenance is relevant because it allows the exclusion of endothelial involvement in the CCT increase in WMS. The main confocal finding is the abnormal cell population in the superficial stroma, consisting of activated and abnormally shaped keratocytes with an increased density. In fact the reported normal values for normal population are between 804±15 cell/mm2 to 1060±47 cell/mm2 for the anterior stroma and 480±67 cell/mm2 and 771±14 cell/mm2 for the posterior stroma, respectively [4Patel DV, Mc Ghee CNJ. Contemporary in vivo confocal microscopy of the living human cornea using white light and laser scanning techniques: a major review Clin Exp Ophthalmol 2007; 35: 71-88.]. The keratocytes density calculated in both anterior and posterior stroma in the control group exhibited such normal values. Therefore, it appears that in our patient, beside a normal cellular population in the posterior stroma, there is an alteration of the cellular pattern localized in the anterior stroma.

Beside the increased keratocytes density the presence of activated cells acquiring fibroblastic characteristics could indicate an increased metabolic activity and collagen synthesis. As an abnormal collagen synthesis is at a basis of WMS, the abnormalities of the anterior corneal stroma evidenced in this study, could possibly be attributed to the connective tissue alterations that characterize the disease, and help to explain the increase of the corneal thickness in affected patients. This is the first report of in vivo confocal corneal investigation in mesodermal dysmorphodystrophy. Further investigations involving a larger number of WMS subjects would be useful to confirm the anterior stroma alterations in the cornea of the affected patients.