The aim of this study is to investigate fundus autofluorescence (FAF) as well as fluorescein angiography (FA), indocyanine green angiography (IA), and optical coherence tomography (OCT) in a patient with pigmented paravenous chorioretinal atrophy (PPCRA). A funduscopic examination revealed chorioretinal atrophy along the paravenous area in both eyes. A marked bone spicule pigment clumping together with the atrophy was noted left eye. FA and IA showed a window defect and hypofluorescence, respectively, which exclusively corresponds to the atrophic area along the retinal vein area and the optic disc both eyes. FAF revealed geographic hypofluorescence along the paravenous and supranasal retinal areas. Hyperfluorescence was noted, which comparatively surrounded the hypofluorescence in the peripheral paravenous distribution. Hypofluorescence detected by FAF corresponded to the areas of retinal thinning and atrophy detected by OCT and FA. FAF is a useful examination in PPCRA, which can noninvasively demonstrate the distribution of deficit and dysfunction of retinal pigment epithelium.

We herein report a case of PPCRA in a Japanese female, who underwent FAF as well as fluorescein angiography (FA), indocyanine green angiography (IA), and optical coherence tomography (OCT).

REPORT OF A CASE

A 59-year-old female presented with fundus abnormalities on a medical examination without ocular symptoms in both eyes 14 years ago. She was referred to our hospital for further follow-up of the fundus abnormalities on October 8, 2010. Her visual acuity was 1.2 both eyes with no major refractive error. Anterior segments and vitreous media were normal. A funduscopic examination revealed chorioretinal atrophy along the paravenous area in both eyes, and supranasal retinal areas in her left eye without macular involvement. A marked bone spicule pigment clumping together with the atrophy was noted left eye (Fig.1A 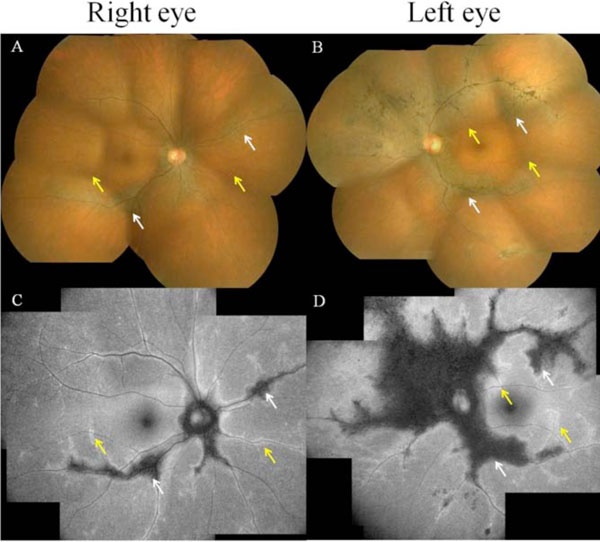 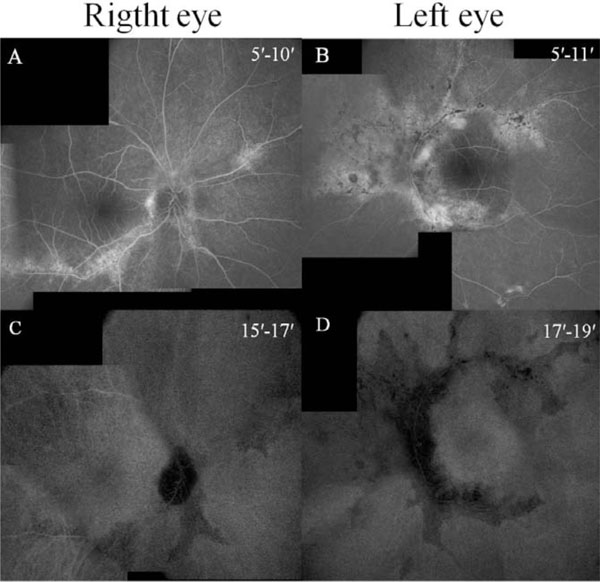 ), respectively, which exclusively corresponds to the atrophic area along the retinal vein area and the optic disc both eyes. The patient was diagnosed with PPCRA. Spectral domain OCT (RS-3000 advance®; NIDEK, Gamagori, Japan) displayed thinning of the retina in macular map and cross scans in the atrophic areas revealed thinning of not only RPE layer and the outer retinal layer, but also inner retinal layer (Fig. 3A 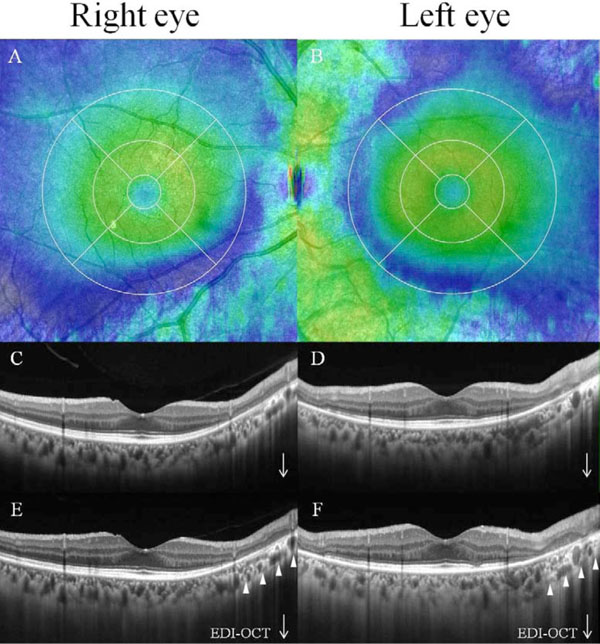 ). The Humphrey SITA-Standard 30-2 visual field test showed scotomata corresponding to the retinal atrophic area both eyes. An electroretinogram (ERG) demonstrated that right eye was subnormal, while reduced a and b waves response was noted in left eye together (Fig. 4 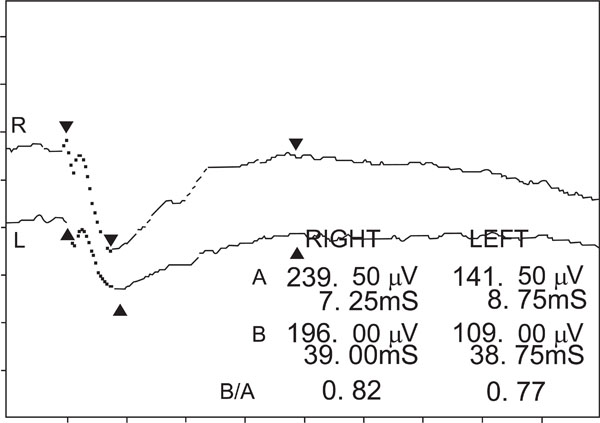 FA and IA showed window defects and hypofluorescence in the atrophic area, respectively, which were almost the same areas. However, FAF clearly demonstrated characteristic

Although the pathogenesis of PPCRA is still unknown, FAF extensively revealed abnormalities of the RPE correlated with paravenous regions. In addition, other ophthalmological examinations showed thinning of choroidal thickness and atrophy of the choroid together with the paravenous atrophy. Therefore, choroidal circulation disorder in the paravenous region of the retina may contribute to RPE abnormalities, which plays a potential role in the pathogenesis of PPCRA.

Usually, the amplitude of the ERG is markedly reduced or disappears from early phase of RP. In this case, right eye was subnormal, while reduced a and b waves response was noted in left eye together with more extensive atrophy. When the atrophy involves extensive areas, the amplitude should be reduced even in PPCRA. Therefore, it may be difficult to differentiate PPCRA from RP based on only the ERG findings in selected cases.

In conclusion, FAF can noninvasively and clearly demonstrate the distribution of deficit and dysfunction of RPE. Also, FAF more extensively revealed abnormalities compared with FA or IA, which is a useful examination to compliment a diagnosis of PPCRA.