It has long been known that pregnancy has an impact on various diseases including hypertension, diabetes, and graves disease. It can also precipitate disease, as in pregnancy-induced-hypertension and gestational diabetes. Very little has been written concerning choroidal neovascularization (CNV) in pregnancy. One case report describes CNV as a complication of pre-eclampsia in a patient with antiphospholipid syndrome [1 Curi A, Jacks A, Pavesio C. Choroidal neovascular membrane presenting as a complication of preeclampsia in a patient with the antiphospholipid syndrome Br J Ophthalmol 2000; 84: 1075.]. Another publication looked at the association between development of CNV and pregnancy [2 Rhee P, Dev S, Meiler WF. The development of choroidal neovascularization in pregnancy Retina 1999; 19(6): 520-4.]. There have also been case reports of CNV occurring in myopes receiving phakic intraocular lenses [3 Ruiz-Moreno JM, de la Vega C, Ruiz-Moreno O, et al. Choroidal neovascularization in phakic eyes with anterior chamber intraocular lenses to correct high myopia J Cataract Refract Surg 2003; 29(2): 270-4.-6 Ruiz-Moreno JM, Montero JA, de la Vega C, et al. Macular choroidal neovascularization in myopic eyes after phakic intraocular lens implantation J Refract Surg 2006; 22(7): 689-94.]. To our knowledge, no cases have reported CNV in a pregnant patient with the Verisyse™ (Abbott Medical Optics Inc. Abbott, IL, USA) iris-supported phakic intraocular lens (IOL). While no current evidence exists showing a correlation, such an association would have an impact on advising women of childbearing age considering anterior chamber intraocular lenses for vision correction.

A 39-year-old woman with a manifest refraction (MR) of -14.25+1.50x53º, and a corrected distance visual acuity (CDVA) of 20/20 OS, underwent surgery with placement of a -14.00 diopter iris-supported phakic IOLs (Verisyse™) without knowing she was pregnant. Resultant uncorrected distance visual acuity (UDVA) was 20/30. Three weeks after Verisyse™ implantation she became aware of her pregnancy and was determined to be at 15 weeks gestation. At this time, she developed acute vision loss in the left eye. She reported seeing a dark blue/brown circle in her central vision, and blurriness without pain. The patient denied trauma or flashes of light. Her only medications were a daily prenatal vitamin &#xB;and artificial tears as needed. On examination her CDVA was 20/60 OS with mild metamorphopsia. Anterior segment exam showed a well-positioned Verisyse™ lens. Fundoscopic exam of the left eye revealed a small area of hemorrhage directly in the fovea, consistent with a Fuch’s spot (Fig. 1 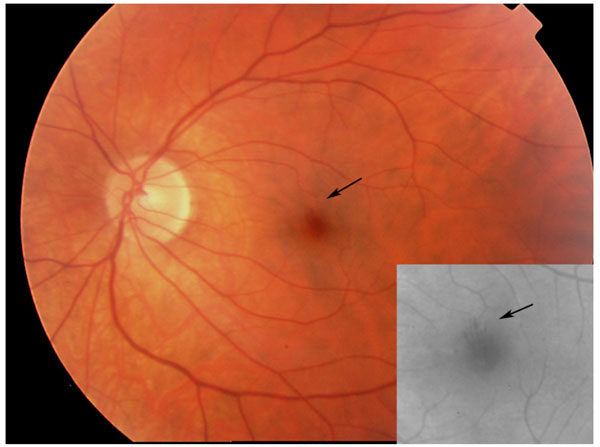 ). She had a normal optic disc size, shape, and color, with sharp margins and a cup-to-disc ratio of 0.2. The major retinal vasculature appeared to be normal. In the foveal region, pigmentary mottling and some intraretinal hemorrhage extended temporal to the fovea. Fluorescein angiography and visudyne photodynamic treatment were not done due to the pregnancy. The plan was observation and to return if vision worsened. Her vision stabilized one month later, and UDVA remained 20/60. Two months after her onset of symptoms (23 weeks gestation), UDVA improved to 20/40 with less distortion and blurriness. Dilated fundus exam showed subtle hemorrhages just temporal to the fovea.


There was concern that valsalva manouvres during vaginal delivery might lead to increased retinal bleeding, therefore, cesarean section was performed at term. By phone interview one week after delivery, she reported her vision was near baseline and there was only slight distortion on using Amsler grid.

Other than being highly myopic, our patient had no other known risk factors to explain the development of CNV during her pregnancy. The phakic lens, pregnancy, high myopia, undiagnosed lacquer cracks, or a combination of these may have caused the CNV. Further research is needed to help elucidate these complex relationships. We are reporting this case in an attempt to alert the surgeon of a potential increased risk of CNV, should a woman become pregnant after receiving a phakic anterior chamber lens.