Informed consent was obtained from all subjects prior to participation, and the study adhered to the tenets of the Declaration of Helsinki. No institutional review board approval was required for this study because cataract surgeries and Nd:YAG laser posterior capsulotomy have been widely performed.

Five consecutive eyes from five patients who underwent phacoemulsification and IOL insertion at Nikko Memorial Hospital were examined. All developed LAC with subjective visual symptoms after surgery and subsequently underwent Nd:YAG laser posterior capsulotomy between June and September 2010. LAC was defined as a distended posterior capsule and accumulation of a liquefied substance between the IOL and posterior capsule observed during slit-lamp examination. The clinical data of the patients are shown in Table 1. All IOL were biconvex-shaped and spheric. In each case, Healon® (Abbott Laboratories, Abbott Park, Ill, USA) was used as the ophthalmic viscosurgical device. Before each Nd:YAG laser treatment, we confirmed the absence of obvious anterior displacement and decentration or tilt of the IOL with the slit-lamp, and established that intraocular pressure was within the normal range.

Using OPD-Scan II version 2.10c (Nidek, Gamagori, Japan), corneal topography, autorefraction and high-order aberrations, as well as visual acuity, were measured immediately before and 1 month after capsulotomy. Examinations for refraction and aberrations were performed 30 minutes after instillation of 0.5% tropicamide and 0.5% phenylephrine. The maximum diameter for analysis of the aberrations was set at 4 mm, thus preventing disturbance by the iris.

Corneal topography analysis showed no asymmetrical or irregular astigmatism in any of the eyes. As shown in Fig. (1 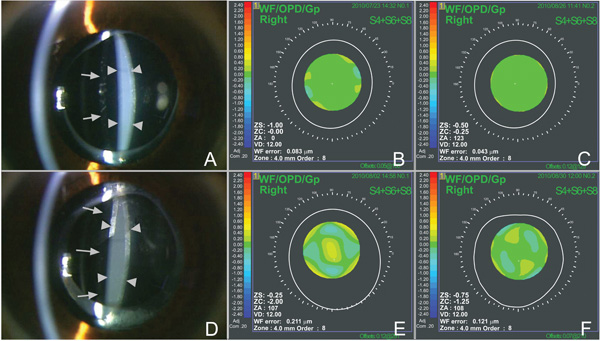 ), based on map patterns of the spherical-like aberrations, patients were categorized as one of two types: those showing no obvious changes in aberrations (no capsulotomy effect group; NCE group), and those demonstrating an advanced wavefront component in the center, depressed as a result of capsulotomy (positive aberration depressed group; PAD group).


Measured values for each of the 2 groups are shown in Table 1. After capsulotomy, best-corrected visual acuity (BCVA) was improved (logMAR change >0.1) in only one eye in the PAD group, and no eye showed a decrease in BCVA (logMAR change >0.1). The spherical equivalent refractive error was negatively altered by ≥0.25 D in the PAD group, while a positive or negative change <0.25D was observed in the NEC group. In all eyes, both spherical-like and coma-like aberrations significantly decreased (P=0.015 and 0.047, respectively; paired 2-tailed t test).

The PAD group, which showed a decrease in positive spherical-like aberrations after capsulotomy, became myopic after treatment, suggesting that LAC had a hyperopic effect in this group. Accumulation of a high concentration of materials in the closed space between the IOL and posterior capsule may give the cavity a concave-lens effect as reported by Shah et al. [6 Shah NA, Goulstine DB. Capsular block syndrome presenting with a hyperopic shift J Cataract Refract Surg 2006; 32: 1974-6.] as well as positive spherical-like aberrations. In contrast, the NCE group, which showed no alterations in positive map patterns for spherical-like aberrations after capsulotomy, showed no obvious refractive change or became only slightly hyperopic after treatment. In this group, we surmised that the lower concentration did not result in a lens-like effect, resulting in myopic change due to anterior shift of the IOL, the mechanism of early-onset CBS [3 Miyake K, Ota I, Ichihashi S, Miyake S, Tanaka Y, Terasaki H. New classification of capsular block syndrome J Cataract Refract Surg 1998; 24: 1230-4.].

Although we demonstrated that the refractive characters of LAC vary, the PAD group seemed to become more myopic than the NCE group. The direction of refractive change after capsulotomy may therefore be predicted by examining preoperative map patterns for spherical-like aberrations.

Our study had certain limitations. The number of patients was limited; a larger study group might reveal a significant relationship between map-patterns for spherical-like aberrations and refractive change resulting from capsulotomy. In addition, quantitative analysis of turbidity of the LAC and measurement of anterior-chamber depth might help clarify the mechanism proposed here.