Bevacizumab (Avastin®) has been used by ophthalmologists in many countries as an off-label drug for the treatment of wet age-related macular degeneration (AMD). Due to its short half-life necessitating frequent intravitreal injection, a method for sustained delivery is in need. We demonstrated that bevacizumab could be released in a sustained fashion over 90 days from nano- and microspheres fabricated from poly(DL-lactide-co-glycolide) and poly(ethylene glycol)-b-poly(D,L-lactic acid), respectively. The drug release rate could be adjusted by alteration of the drug/polymer ratio. The use of such nano- and microspheres as bevacizumab delivery vehicles may improve the treatment of wet AMD.

305.2mg PLGA was dissolved in 5ml of dichloro-methane. To this solution, 0.2ml of bevacizumab (25mg/ml) was added. The resulting mixture was sonicated for 30 seconds using a probe sonicator (Model VC50, Sonics & Materials Inc, Danbury, CT, USA). Then, the mixture was poured into 40ml of polyvinylpyrrolidone solution (2.5% w/v) and was sonicated for another 30 seconds. After evaporation of dichloromethane through stirring the mixture overnight in fume hood, nanoparticles were collected through centrifugation and washed with 25ml x 2 MiliQ water. Finally, nanoparticles were freeze-dried overnight, in 74% yield. Bevacizumab loading efficiency (LE) is 95.4% as determined by UV spectrometry based on the following equation:

Between 30-50mg of bevacizumab-loaded particles were placed into centrifuge tubes, followed by addition of 1ml of 10mM phosphate buffered saline (PBS). The tubes were capped and maintained in a 37oC incubator. At certain intervals, the tubes were centrifuged and 0.5ml of the supernatant was removed followed by addition of an equal volume of fresh PBS. The concentration of bevacizumab in the supernatant was determined using a UV spectrophotometer (Beckman 640B) at 270nm against a calibration curve.

For equivalent bevacizumab/PLGA ratios (1.6%), the particle size range obtained was dependent upon the method of preparation. PLGA spheres were both obtained but the particle sizes were heterogenous both when a probe sonicator was used (Fig. 1 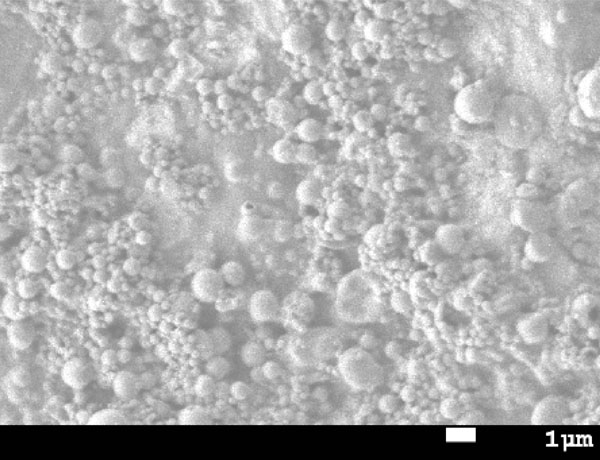 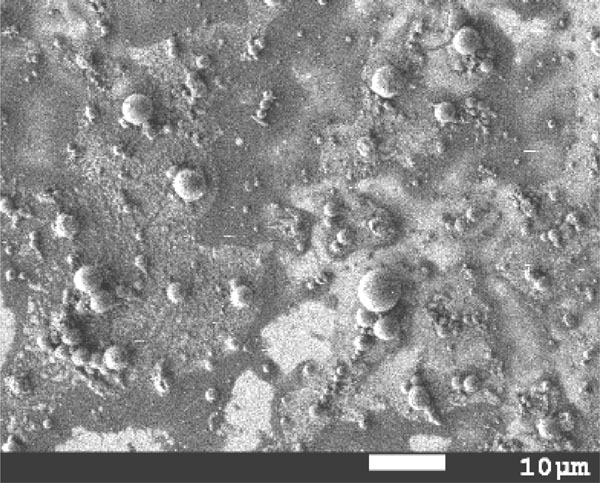 ). Sonication resulted in particles with diameters mainly within the 0.2 to 1.0µm range. Particles prepared using a homogenizer, however, were more polydispersed, with the majority of particle diameters ranging from 0.5 to 3µm. When the loading of the drug was increased to bevacizumab/PLGA = 13%, the particles no longer showed shape uniformity, although some spheres were still present (Fig. 3 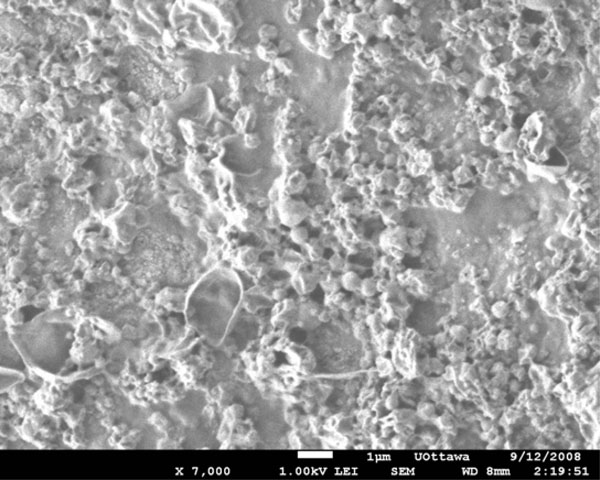 ). The particles fabricated from PEGLA15 appeared spherical and porous (Fig. 4 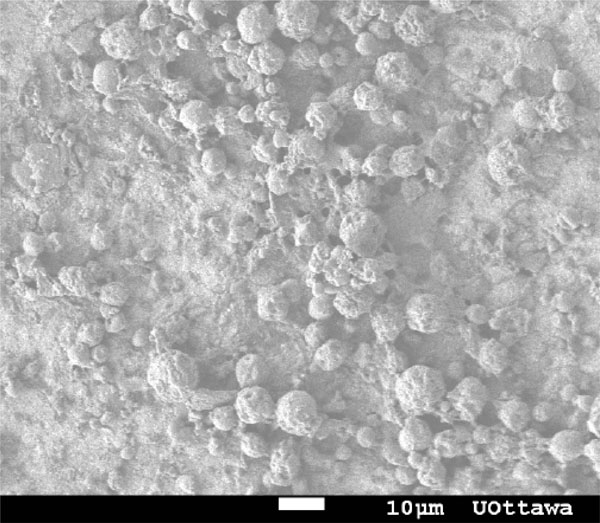 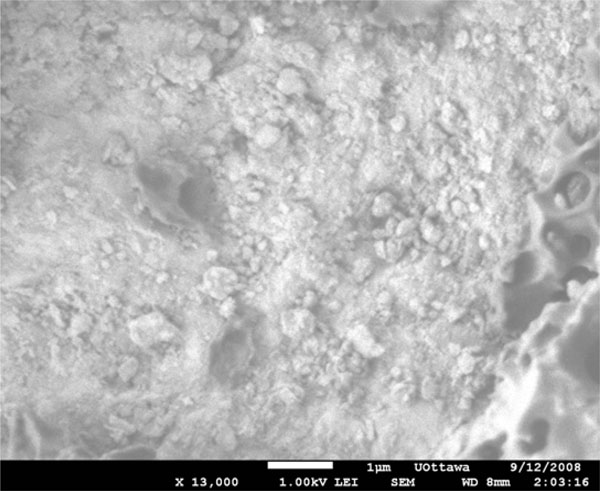 
Within our experimental range, the drug encapsulation (loading) efficiency was above 90% (Table 1) when PLGA and PEGLA15 polymers were used. The yield of the particles was greater than 70% with these two polymers. However, when PEGLA55 was used, the yield dropped to 24%.

For the particles with an initial bevacizumab/ PLGA=1.6% loading ratio (PLGA-A, Table 1), approximately 0.5mg of bevacizumab was relatively steadily released over 55 days (Fig. 6 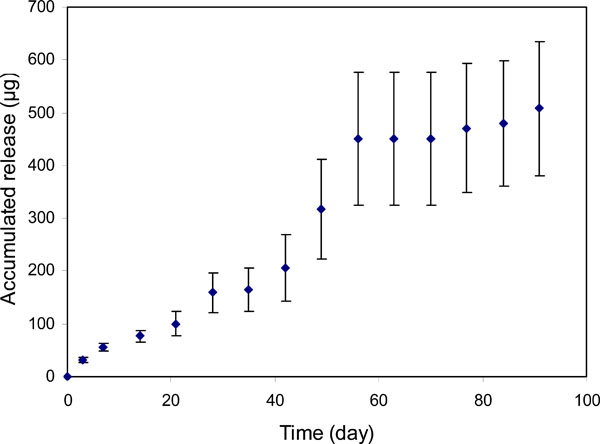 ). Beyond this time until day 91, only an insignificant amount of release was detected. However, when the bevacizumab/PLGA ratio was increased to 13% (PLGA-HiA, Table 1), a steady release of 1.9mg of bevacizumab was observed throughout the experimental period of 91 days. There was a plateau in the release profile around 30 days for both of the release curves (Figs. 6 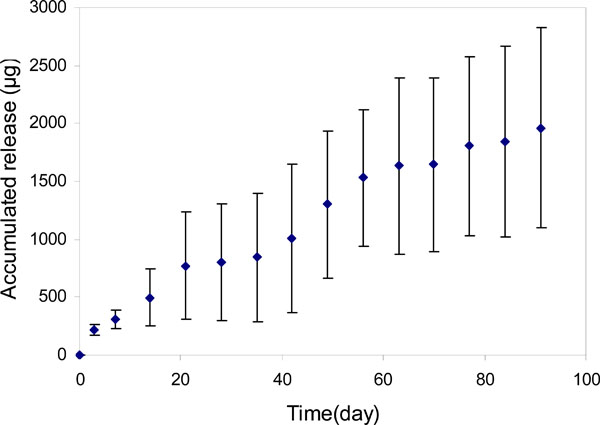 ). Over the 91-day release period, we calculated that approximately 47% and 64% bevacizumab were released from particles with 1.6% and 13% drug loading respectively. Bevacizumab release from the PEGLA15 particles showed a similar plateau in the release profile (Fig. 8 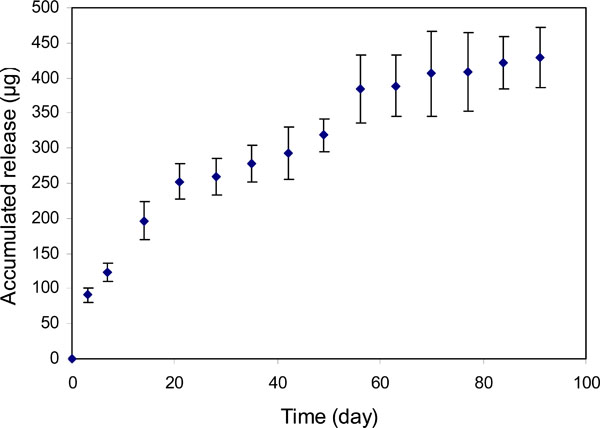 ), but starting at about day 20. Approximately 62% of encapsulated bevacizumab was released from this system during the 91-day period.

We noted that with a higher loading of bevacizumab, the PLGA particles lost uniformity, this was most likely due to partial phase separation of PLGA polymer and bevacizumab. PEG-b-PLA has two polymer blocks. The PEG block is water-soluble and has anti-fouling properties. As a result, it is believed that the particles prepared from this polymer are long-circulating within the in vivo environment. Unlike PLGA, PEGLA15 is hydrophilic and retains water. Water could be removed via freeze-drying, which was why the particles from this polymer appeared porous after loss of absorbed water. The hydrophilicity of PEGLA15 also facilitated dispensing the particles compared to PLGA. The PEGLA55 polymer was even more hydrophilic than PEGLA15. This resulted in a lower yield of the particles as the majority of the polymer was dissolved in the water phase during particle preparation.

The plateaus in the release profiles at around 30 days for both of the release curves as shown in Figs. (6

), suggested that the release of the surface absorbed bevacizumab was completed after about 30 days of incubation of the particles. After that, the PLGA began degrading and released additional drug entrapped within the polymeric core [32Cao X, Schoichet MS. Delivering neuroactive molecules from biodegradable microspheres for application in central nervous system disorders Biomaterials 1999; 20(4): 329-9.].

Our results indicated that bevacizumab can be released from nano- and microparticles of PLGA and PEGLA in a sustained fashion for over 91 days. The release rate could be adjusted by altering the drug/polymer ratio. However, bevacizumab activity still needs to be tested in vivo using animal models. Nevertheless, these results may offer improvements for the treatment of wet AMD using bevacizumab and may also improve cancer treatment using the same carriers for sustained release of the drug.