Profile of the Patients With Central Retinal Vein Occlusion 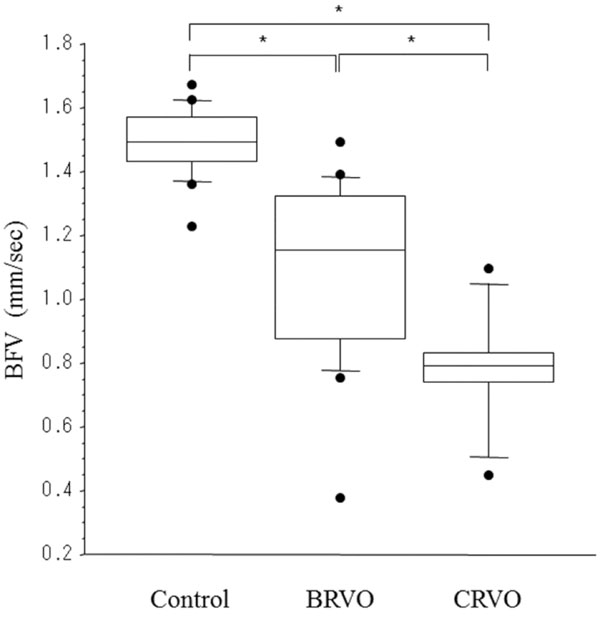 
This study showed that the perifoveal capillary BFV was significantly lower in patients with CRVO than in healthy persons and BRVO patients. This difference may have been detected because functional and/or anatomic capillary closure is more advanced in CRVO. It is possible that a reduction of BFV in CRVO leads to functional vascular obstruction and relative retinal ischaemia, resulting in the increased production of molecules like vascular endothelial growth factor (VEGF), which potently increases vascular permeability [4 Dvorak HF, Brown LF, Detmar M, Dvorak AM. Vascular permeability factor/vascular endothelial growth factor, microvascular hyperpermeability, and angiogenesis Am J Pathol 1995; 146: 1029-39.]. VEGF also increases the expression of intercellular adhesion molecule-1 (ICAM-1) by cultured endothelial cells, leading to the rolling, adhesion, and migration of leukocytes [5 Lu M, Perez VL, Ma N, et al. VEGF increases retinal vascular ICAM-1 expression in vivo Invest Ophthalmol Vis Sci 1999; 40: 1808-2.]. Accordingly, it can be suggested that chronic trapping of leukocytes in the capillaries of CRVO patients may lead to impaired perfusion, resulting in the overexpression of VEGF and ICAM-1 along with the development/progression of macular oedema. Thus, VEGF and ICAM-1 may both play a role in reducing the BFV of CRVO patients with macular oedema.

In conclusion, a decrease of perifoveal capillary BFV may have a role in the pathogenesis of macular oedema in patients with CRVO.

The authors do not have any proprietary interest in this manuscript.

The authors have not received any financial support.