Choroidal Naevi are generally thought to be trivial. However, sometimes they cause visual loss, visual filed defect and rarely transform into malignant melanoma. We report the first case of unilateral numerous choroidal naevi in a healthy female associated with transient cystoid macular oedema and postulate about its pathogenesis.

A 48-year-old female presented with three weeks history of left eye blurred vision. She had no previous ophthalmic or medical problems and was not on any medications. Visual acuity (VA) at presentation was 6/5 right and 6/9 left eye. External ocular and anterior segment examination was normal. Dilated funduscopy of left eye showed numerous flat, pigmented choroidal lesions with indistinct border suggestive of choroidal naevi in the posterior pole and inferior retina with cystoid macular oedema (CMO) (Fig. 1 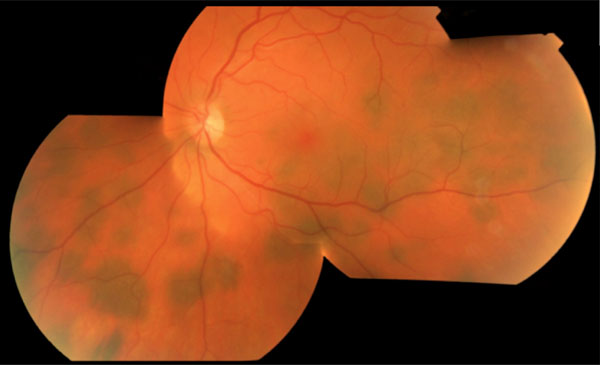 Choroidal naevi can induce histologic changes in their neighbouring tissues such as narrowing or complete obliteration of the choriocapillaris, degeneration or proliferation of RPE and photoreceptors disturbances [2Naumann G, Yanoff M, Zimmerman L. Histogenesis of malignant melanomas of the uvea histopathologic characteristics of nevi of the choroid and ciliary body Arch Ophthalmol 1966; 6: 784-96.]. Shield et al. have reported on the presence of retinal oedema overlying a choroidal naevus with associated RPE/choriocapillaris irregularities in 15% of their patients when examined with Optical coherence tomography (OCT) [3Shields C L, Mashayekhi A, Materin MA, et al. Optical coherence tomography of choroidal nevus in 120 patients Retina 2005; 25(3 ): 243-52.].

Multiplicity of choroidal naevi to this extent is unusual. Shield et al. reported a maximum of 10 naevi in less than 1% of their 3422 studied eyes [4Shields CL, Furuta M, Mashayekhi A, et al. Clinical spectrum of choroidal nevi based on age at presentation in 3422 consecutive eyes Ophthalmology 2008; 115(3 ): 546-2.].

In this patient, choroidal naevi were scattered in the parafoveal and peripheral retina but spared the fovea. Spectral domain OCT did not show any disturbance of overlying RPE and photoreceptor layer (Fig. 3

). There were no other pathologic findings to explain the CMO. In the absence of detectable changes in RPE and photoreceptor layers, we postulate that altered cytokine milieu might have caused the CMO and its subsequent resolution. Nevertheless, unilateral or bilateral macular oedema may occur with no identifiable cause. In some idiopathic cases the oedema may resolve spontaneously or in some others persist despite treatment [6Johnson MW. Etiology and treatment of macular edema Am J Ophthalmol 2009; 147(1 ): 11-21.]. Although this case may belong to this category, one would naturally like to speculate about the pathogenesis of unilateral macular oedema in such a rare condition.