Laser peripheral iridotomy is the procedure of choice for the treatment of angle-closure glaucoma caused by relative or absolute pupillary block. Nd: YAG laser iridotomy has been reported to have several complications such as Iris bleeding, hyphema, transient IOP elevation, intraocular inflammation, choroidal, retinal detachment and vitreous hemorrhage.

We report a case of a 74 year old lady on anticoagulant treatment who developed pupillary block and angle closure glaucoma after cataract surgery and anterior chamber intraocular lens (ACIOL) insertion complicated with intraoperative bleeding. The patient was treated with Nd: YAG laser iridotomy , however, the ACIOL was inadvertently fractured after a single shot of laser and it had to be replaced. Although the incidence is rare. Ophthalmologists and Opticians should be aware that an ACIOL may be fractured even after a single Nd:YAG laser shot and avoid to perform it close to the ACIOL. Pretreatment counseling should include this rare complication.

Laser peripheral iridotomy (PI) is the procedure of choice for the treatment of angle-closure glaucoma caused by relative or absolute pupillary block. PI allows the aqueous to pass directly from the posterior chamber into the anterior chamber, bypassing the pupil and thus releasing the block. The incidence of pupillary block is increased when an anterior chamber intraocular lens (ACIOL) is inserted during cataract surgery. Thus, a PI should be performed at time of surgery or if this is impossible within a day or two after surgery.

A 74 year old lady on anticoagulation therapy for atrial fibrillation, referred to our department complaining for blurred vision in her left eye (LE). Her best corrected visual acuity (BCVA)was 1/10 and intraocular pressure (IOP) was 17mmHg. Slit-lamp examination revealed a hypermature cataract with pseudoexfoliation. Fundoscopy did not reveal any macular disease although it was performed with difficulty due to the hypermature cataract. She underwent left eye phacoemulsification; after the removal of the cataract, the capsular bag was not stable enough to insert an intraocular lens (PCIOL) in the bag and an ACIOL (MTA3UO ALCON) was inserted in the anterior chamber (AC). Even though the insertion of the ACIOL wasuneventful there was massive bleeding from the iris angle as soon as the lens was supported on the iris angle.

At this time it was decided that a peripheral iridotomy could not be performed safely. The first day after surgery, the AC was filled with blood and intraocular pressure was 28mmHg. Dexamethazone, Chloramphenicol as well as anti-glaucoma drops were administered and the patient was followed up every 2 days. Eventually, in 3 weeks postoperatively, best corrected visual acuity improved to 6/10LE and intraocular pressure (IOP) was within normal limits with no additional medication. The patient was advised that a PI should be performed with Nd:YAg laser, however, she refused further treatment.

Fifteen days later, the patient presented complaining for LE pain. BCVA was 2/10, there was corneal edema and IOP was 40mmHg due to the development of pupillary block. Anti-glaucoma eye drops and acetazolamide were administered to reduce IOP. As soon as the IOP was reduced and the corneal edema partially subsided the patient consented to undergo Nd:YAG iridotomy in order to release the pupillary block. The iris was dark brown (Fig. 1 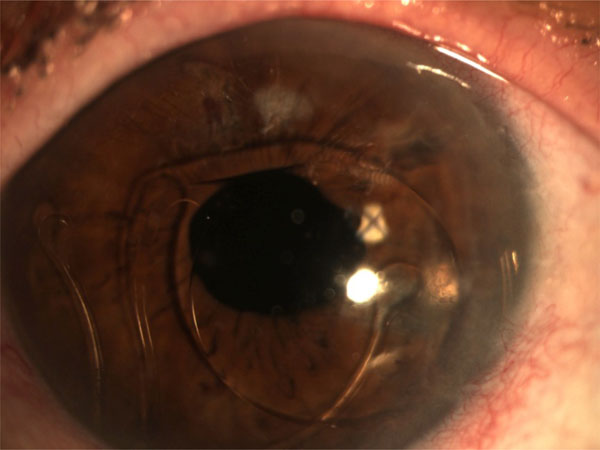 ) and the energy was increased to 6mj; after one single shot on the iris, the haptic of the lens was fractured in pieces (Figs. 1


In the following days after a consultation with her cardiologist the anticoagulant treatment was reduced and the patient was taken to theatre; the fractured IOL was removed, a new ACIOL was inserted and a PI was performed surgically. Three months later BCVA was 6/10 and IOP within normal levels.

Nd: YAG laser emits focal nanosecond pulses that ionizes atoms in the iris and a plasma of quasi-free electrons and ions is created causing a plasma expansion. Then this plasma is collapsed, cooling it produces emission in the form of a spark. Resulting from the plasma expansion, hypersonic shock waves propagate through the media [1Ng WS, Ang GS, Azuara-Blanco A. Laser peripheral iridoplasty for angle-closure. Cochrane Database Syst Rev 2012; 2: CD006746.].

We postulate that the fracture of the haptic of the AC IOL, in our patient occurred due to the augmented energy required on the one hand and on the other due to the proximity of the laser spot to the haptic of the ACIOL. Additionally, the fact that the transparent haptics of an ACIOL maybe hardly visible in dark colored eyes with pupillary block and when the cornea is not completely clear should be also taken into consideration. Another explanation would be that the IOL had been mechanically stressed during implantation and thus one single shot of Nd:YAG resulted in to this complication, however this is highly unlikely since the handling of the ACIOL was uneventful, with no additional manipulations before and during the insertion of the lens in the AC. This is also supported by the fact that the ACIOL remained intact for 15 days after surgery and was only fractured after the application of the Nd:Yag laser. Although this complication, is rare, and to the best of our knowledge has never been reported before, Ophthalmologists and Opticians should be aware that an ACIOL may be fractured even after a single Nd:YAG laser shot and avoid to perform it close to the ACIOL.

Pretreatment counseling should include this rare complication in patients with ACIOLs requiring a peripheral iridotomy. Additionally, reduction of anticoagulant treatment maybe be considered in patients with hypermature cataracts with pseudoexfoliation and/or phacodonesis in order to avoid intraoperative bleeding since these cases are more challenging and extra manipulations may be required.

The authors report no conflicts of interest. The authors alone are responsible for the content and writing of the paper.