A total of 210 eyes of 182 patients with neovascular AMD were identified. Mean follow-up time was 1.34 years (SD ± 0.77). Central retinal thickness reduction in women was significantly inferior to that in men (p=0.05). Patients with cystoid type macular edema had significantly greater reduction in CRT compared to patients with subretinal fluid (p<0.001) or pigment epithelium detachment (p<0.001). The percentage drop of CRT was no longer statistically significant after the sixth injection. Age, initial BCVA, prior photodynamic therapy and lesion type had no statistically effect on CRT response.

The aim of the present study was to identify clinical characteristics at presentation for poor central retinal thickness response to intravitreal injections of ranibizumab in wet AMD.

Research adhered to the tenets of the Declaration of Helsinki.

Investigating our electronic patient records (Eyeswide), patients with neovascular AMDtreated with intravitreal injections of 0.5mg/0.05ml ranibizumab were identified and their notes reviewed. The evidence of choroidal neovascularization (CNV) was confirmed by fluorescein angiography. Patients were treated with ranibizumab following the PrONTO regime [9Lalwani GA, Rosenfeld PJ, Fung AE , et al. A variable-dosing regimen with intravitreal ranibizumab for neovascular age-related macular degeneration: year 2 of the PrONTO Study. Am J Ophthalmol 2009; 148(1): 43-58.]. After a loading dose of three injections, criteria for further anti-VEGF injections were; detection of any intraretinal, subretinal fluid, serous pigment epithelium detachment, haemorrhage or drop in vision. Patients were followed up monthly and by OCT regardless whether they received an injection or not until six months after the last injection. The patient’s baseline characteristics are shown in Table 1.

To describe mean relative change in central retinal thickness (CRT) compared to a reference central retinal thickness (RCRT) for several predictors, a multivariate analysis was performed. Subject was treated as random factor. Results were presented as mean percentage differences to RCRT with the corresponding p-values and 95% confidence intervals. All evaluations were done using R version 15.1.

Reference central retinal thickness was defined for each eye as the mean foveal thickness of all examinations in which no intraretinal (IRF), subretinal fluid (SRF) or pigment epithelium detachment (PED) could be observed.

The factors analyzed were gender, age (50 to 74 versus ≥75 years), initial best corrected visual acuity (BCVA; LogMAR ≥0.4 versus 0.3 to 0.0), prior photodynamic therapy, lesion type (classic versus occult), type of macular edema and the total number of injections.

The multivariate analysis of the various clinical factors showed that the central retinal thickness reduction in women was significantly inferior to that in men (-6.47%, 95%CI ± 6.56, p=0.05). Age, initial BCVA and prior photodynamic therapy had no effect on macular thickness response. 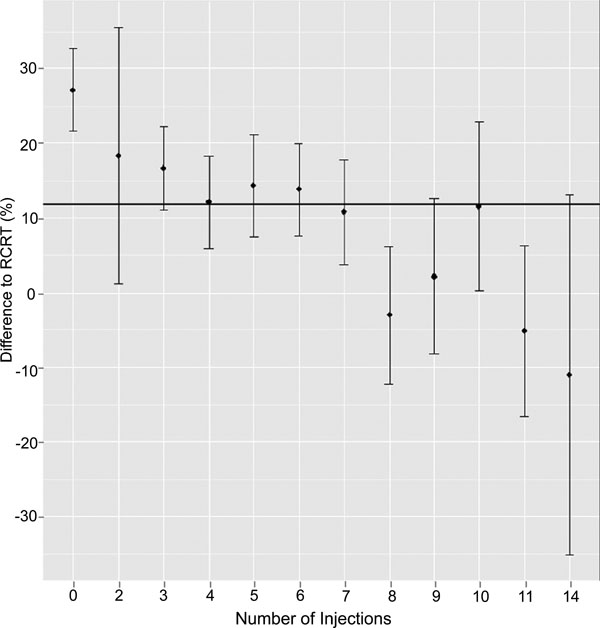 Analysis of risk factors is of paramount importance for the understanding of a disease and has a high impact on our daily clinical practice. Furthermore, considering the significant treatment costs in patients with wet AMD, it is important to identify predictive factors in order to evaluate cost effectiveness.

We identified several baseline characteristics associated with the risk for poor reduction of macular edema including female gender, macular edema with predominant subretinal fluid and patients with a predominant pigment epithelium detachment. In addition, we found that the maximal reduction of CRT had occurred by injection six. Thereafter ranibizumab had no longer the same good effect on the central retinal thickness.

These findings indicate that neovascular AMD may feature more subtle subgroups than previously known but further research is needed to correlate our findings with genetic genotype polymorphism which were recently described [16McKibbin M, Ali M, Bansal S , et al. CFH. VEGF and HTRA1 promoter genotype may influence the response to intravitreal ranibizumab therapy for neovascular age-related macular degeneration. Br J Ophthalmol 2012; 96(2): 208-12.]. However, we believe that our findings contribute to a better understanding of the prognosis of several subgroups in wet AMD and this should be taken in account and must be explained to the patient before treatment.