Classical Pathology of Sympathetic Ophthalmia Presented in a Unique Case

The ocular pathology of sympathetic ophthalmia is demonstrated in a 10 year-old boy who sustained a penetrating left globe injury and subsequently developed sympathetic ophthalmia in the right eye two months later. Two and a half weeks following extensive surgical repair of the left ruptured globe, he developed endophthalmitis and was treated with oral and topical fortified antibiotics. One month after the initial injury, a progressive corneal ulcer of the left eye led to perforation and the need for emergent corneal transplantation. The surgical specimen revealed fungus, Scedosporium dehoogii. The boy received systemic and topical anti-fungal therapy. Two months following the penetrating globe injury of the left eye, a granulomatous uveitis developed in the right eye. Sympathetic ophthalmia was suspected and the patient began treatment with topical and oral corticosteroids. Given the concern of vision loss secondary to sympathetic ophthalmia in the right eye, as well as poor vision and hypotony in the injured eye, the left eye was enucleated. Microscopically, granulomatous inflammation with giant cells was noted within a cyclitic membrane which filled the anterior and posterior chamber of the left globe. Other classic features including Dalen-Fuchs nodules were identified. Small, choroidal, ill-defined granulomas and relative sparing of the choriocapillaris were present. Molecular analysis did not identify evidence of remaining fungal infection. The pathology findings were consistent with previously described features of sympathetic ophthalmia. The present case is unique in that co-existing fungal infection may have potentiated the risk for developing sympathetic ophthalmia in the fellow eye.

This study was approved by the National Eye Institute Institutional Review Board (IRB) for human subjects, and informed consent was obtained from the patient. A 10 year-old Mennonite boy sustained a traumatic perforation of the left globe due to a knife injury. He underwent extensive surgical repair including anterior chamber washout of 80% hyphema, lensectomy, vitrectomy for vitreous hemorrhage, and endolaser treatment for a posterior exiting wound in the infratemporal macula. Afterwards, he received intravitreal antibiotics including amikacin and vancomycin. Two weeks following the initial injury, he developed endophthalmitis. He underwent a vitreous and anterior chamber tap and was treated with intravitreal ceftazidime and vancomycin. He was also started on topical antibiotics including hourly besifloxacin and moxifloxacin. Cultures revealed rare fungal elements, but no bacteria. He was therefore started on topical hourly voriconazole and oral voriconazole 100 mg twice daily for 4 weeks. Due to concern for possible co-existing bacterial infection, oral doxycycline was added to his regimen. He developed a progressive corneal ulcer, and given the concern for Pseudomonas, standard topical antibiotics were switched to fortified topical hourly ceftazidime and vancomycin. One month after the injury, the corneal ulcer perforated, resulting in the need for emergent corneal transplantation in the left eye. The surgical specimen from the host cornea demonstrated fungal elements. DNA sequencing later revealed Scedosporium dehoogii. Seven weeks after injury, oral voriconazole was discontinued as there were no signs of residual infection. Two months following the penetrating globe injury of the left eye, granulomatous uveitis developed in the fellow, right eye. Sympathetic ophthalmia was suspected and the patient began treatment with topical prednisolone acetate 1% every 2 hours and oral prednisone (1.5 mg/kg/day) which was gradually tapered over the next 3.5 months. The vision in the left eye was light perception only. In the right eye, the keratic precipitates (KPs) on the endothelium and anterior lens capsule and cellular reaction in the anterior chamber did not respond to corticosteroid treatment. The vision in the right eye was 20/20. Ten weeks after the injury, enucleation of the left eye was performed given the concern for vision loss secondary to sympathetic ophthalmia in the right eye, as well as blindness and hypotony in the left eye.

Macroscopically, a large corneal transplant button with corneal sutures was noted (Fig. 1A

). There was a thick, proliferative, fibrous membrane in the pupillary area. The retina was totally detached and formed a funnel configuration, admixed with subretinal hemorrhage (Fig. 1B 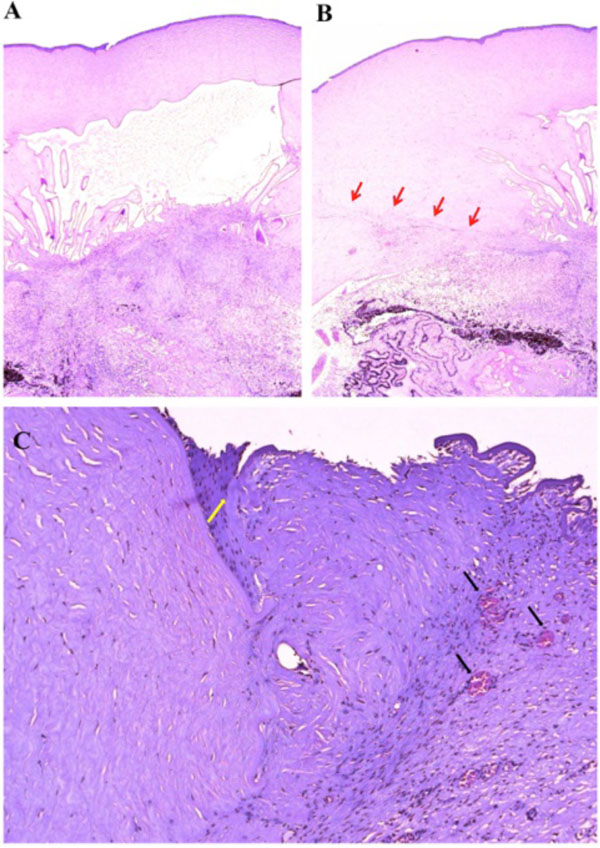 ). Posterior synechiae from the necrotic iris were also adherent to the cyclitic membrane. Granulomatous inflammation containing many CD68+ macrophages and some multi-nucleated giant cells surrounded by lymphocytes (CD3+ > CD20+ cells) was present within the pupillary membrane, the cyclitic membrane, and the anterior vitreous (Fig. 3 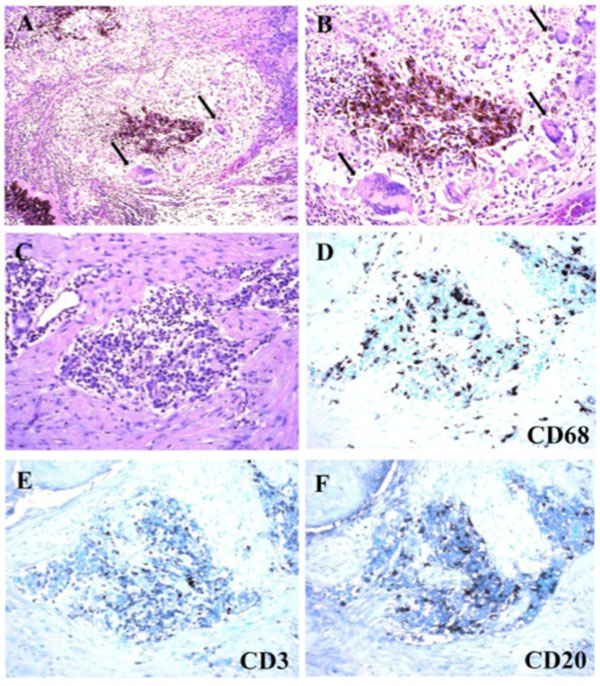 ). There were a few lens capsule fragments and lens cortex remnants within the peripheral cyclitic membrane (Fig. 4A

). The retina was totally detached in a funnel-shaped configuration, and appeared relatively intact in many areas. Dalen-Fuchs nod-ules were noted beneath the RPE layer (Fig. 5A

) and they were composed of predominantly macrophages/epithelioid cells. Small, ill-defined granulomas were also seen in the choroid, along with some CD68+ macrophages, a few CD3+ 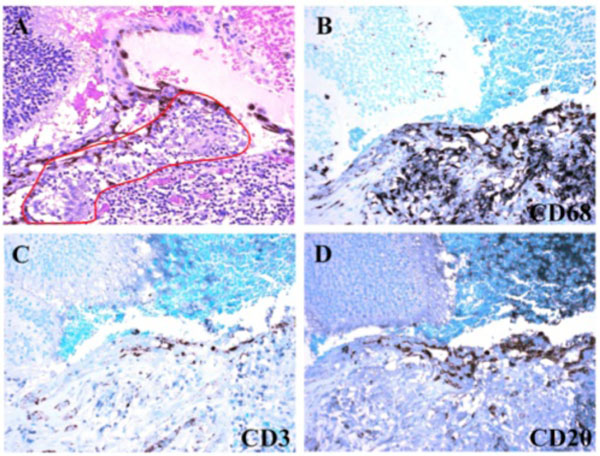 ). The choroid had focal and diffuse monocytic infiltration, and the choroidal vessels were congested in some areas with overall relative sparing of the choriocapillaris (Fig. 7

). No fungi were identified with Grocott-Gomori's methenamine silver stain (GMS). The tissues that demonstrated granulomatous inflammation were microdissected for PCR. However, no fungal DNA was detected using an 18S primer set or a primer set specific for Scedosporium dehoogii (Fig. 8

Until now, there have been two major modalities employed in the clinical management of sympathetic ophthalmia: surgery (which includes either enucleation or evisceration aimed at prevention) and corticosteroid or immunosuppressive agents for treatment once disease develops. In this case, the injured eye was enucleated as there was concern for further vision loss of the fellow, right eye and no significant clinical improvement after the initiation of topical and oral corticosteroid treatment. There is controversy about the exact time to perform the enucleating surgery for the injured eye. Prompt action is generally recommended, because sympathetic ophthalmia has been reported as early as 5 days after injury and early enucleation of the injured eye has been shown to improve the visual prognosis of the sympathizing eye [10Lubin JR, Albert DM, Weinstein M. Sixty-five years of sympathetic ophthalmia.A clinicopathologic review of 105 cases 1913,1978 Ophthalmology 1980; 7(2): 109-21.], Others question the appropriateness of preventative enucleation based on the fact that the exciting eye may actually retain better vision than the sympathizing eye in the course of the disease. Histologic studies have shown no benefit from enucleation of the exciting eye [24Winter FC. Sympathetic uveitis; a clinical and pathologic study of the visual result. Am J Ophthalmol 1955; 39(3): 340-7.]. While significant controversy still exists regarding evisceration and enucleation, improved surgical techniques have resulted in a recent trend favoring evisceration due to improved cosmetic outcomes [15Chu XK, Chan CC. Sympathetic ophthalmia: to the twenty-first century and beyond. J Ophthalmic Inflamm Infect 2013; 3(1): 49.]. Regarding the importance of concurrent infection, early diagnosis of co-existing mixed infectious and inflammatory processes is important, and the prompt initiation of aggressive antimicrobial treatment as well as systemic corticosteroids may improve the prognosis in such cases [3Rathinam SR, Rao NA. Sympathetic ophthalmia following postoperative bacterial endophthalmitis: a clinicopathologic study. Am J Ophthalmol 2006; 141(3): 498-507.].

The authors declare no conflict of interest. Informed consent was provided from the patient.