Volar Dislocation of Second, Third and Fourth Carpometacarpal Joints in Association with a Bennet's Fracture of the Thumb Carpo-Metacarpal Dislocation: A Case Report

Injuries of the carpometacarpal joints of the long fingers are infrequent and go often unnoticed if a thorough clinical exploration and complete radiological assessment is not carried out. The overall frequency of carpometacarpal joints injuries is of 1-2% among trauma of the wrist and the carpus. These are normally secondary to high energy trauma (such as a car or a motorbike accidents). Among these kinds of injuries, the volar dislocation of the metacarpals is much less frequent than the dorsal dislocation, being even rarer the cases in which the three middle metacarpals are involved.

In this case report, we present a case of volar dislocation of the middle three carpometacarpal joints in association with a Bennet’s fracture of the thumb in a 30-year-old male. He was treated in the operating room with reduction and stabilization using Kirschner wires, which allowed a satisfactory recovery of the mobility of the fingers eight weeks after the intervention. It is important to produce an admission diagnosis of this kind of injuries to be able to treat them immediately. Treatment must be performed quickly to reduce and stabilize the dislocation, since this will avoid the vasculo-nervous compression or the edema which increases cutaneous suffering and the risk of complications.

Dislocation of the carpometacarpal joints is a very rare event and it is commonly linked with a high energy trauma [1Kahlon IA, Karim A, Khan Z. Multiple carpometacarpal volar dislocation. J Coll Physicians Surg Pak 2011; 21(1): 49-51.
[PMID: 21276388] ]. The cases in which the three central metacarpals are affected and present a volar dislocation are even fewer [2Dreant N, Norat F, Péquignot JP, Lussiez B. Luxation carpométacarpienne antérieure des deuxième et troisième rayons. Chir Main 2007; 26(4-5): 235-7.
[http://dx.doi.org/10.1016/j.main.2007.07.005] [PMID: 17855145] ]. Moreover, these might or might not be associated with Bennett's fracture [3Dillon JP, Laing AJ, Thakral R, Buckley JM, Mahalingam K. Volar dislocation of the index carpometacarpal joint in association with a Bennett’s fracture of the thumb: a rare injury pattern. Emerg Med J 2006; 23(3): e23.
[http://dx.doi.org/10.1136/emj.2005.027763] [PMID: 16498147] ]. These injuries are often difficult to diagnose in emergency departments if a proper radiological study is not carried out [4Henderson JJ, Arafa MA. Carpometacarpal dislocation. An easily missed diagnosis. J Bone Joint Surg Br 1987; 69(2): 212-4.
[PMID: 3818751] ]. Dislocations of the carpometacarpal (CMC) joints often have subtle radiographic findings that may be overlooked in an acute setting and in the emergency room. Therefore, it is relevant to generate the appropriate views [5Fisher MR, Rogers LF, Hendrix RW. Systematic approach to identifying fourth and fifth carpometacarpal joint dislocations. AJR Am J Roentgenol 1983; 140(2): 319-24.
[http://dx.doi.org/10.2214/ajr.140.2.319] [PMID: 6600352] ] to-allow for a quick diagnosis and treatment, thus reducing the risk of complications. Lateral and oblique views are important for the recognition of the true extent of the injury. Despite these facts, these kinds of injuries-commonly have good prognosis after the acute treatment, presenting a limited amount of complications. Early surgical intervention can lead to good functional results.

Our case deals with a 33 years old male with no relevant medical background, who was admitted to the emergency department after a traffic accident. On his arrival, the patient was conscious and oriented, and presented a head trauma. He also presented a mechanism of direct contusion on his (non-dominant) right hand against the dashboard. In the physical examination, pain and a functional impotence of the hand at 45º was identified, with the presence of a blunt laceration at a thenar level (Figs. 1a 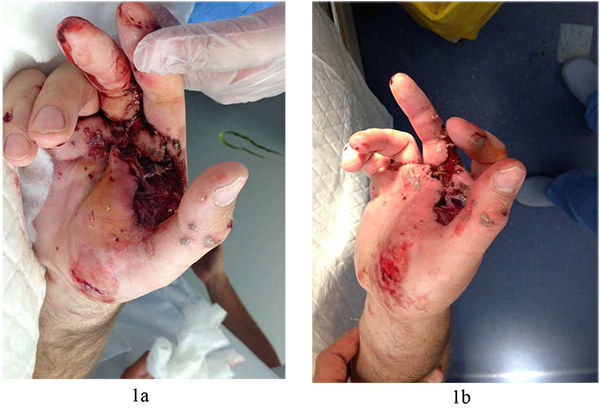 ). Likewise, there was a large edema and swelling on the dorsal side of the hand. The distal vasculo-nervous structures remained intact. The diagnostic hypothesis was confirmed radiologically. This evidenced a radio volar dislocation on the second, third and fourth carpometacarpal joints, linked with a Bennett’s fracture of the first finger (Figs. 2a 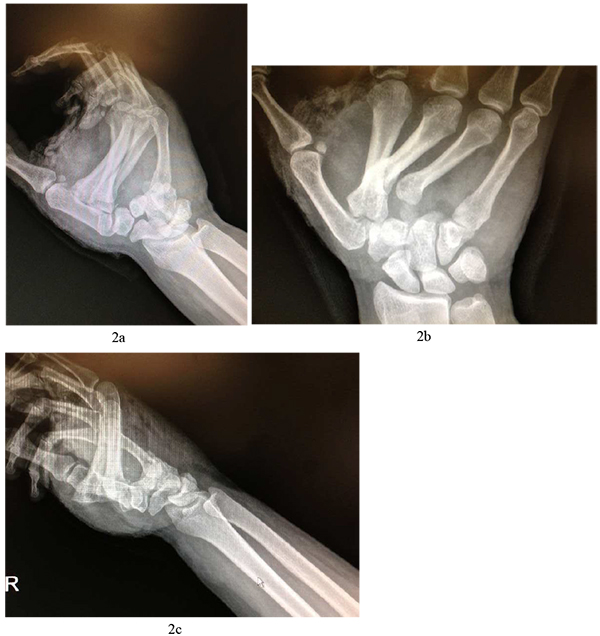 ). After the initial treatment and cleaning of the injuries at the emergency department, the patient was taken to the operating room immediately.


With the patient in supine position and under anesthesia, a thorough debridement of the wound was performed. The integrity of the superficial palmar arch and the rest of tendon structures present on that level were identified (Fig. 3a 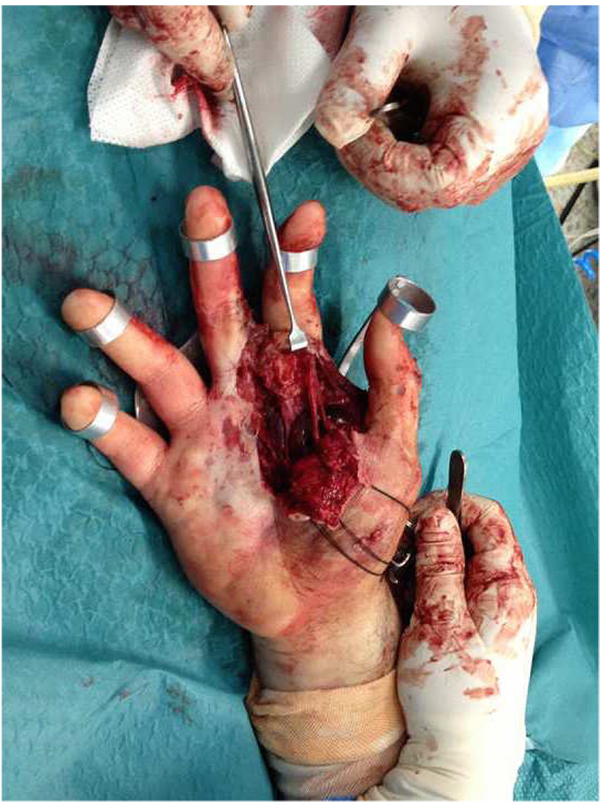 ). Secondly, with the elbow extended, a traction of the three middle fingers was performed, pressing the base of the metacarpals from volar to dorsal. Under scopic control, the correct reduction of the metacarpals was checked before proceeding with the osteosynthesis through multiple 1.5 mm Kirschner wires percutaneously. Taking into account the instability, the first wire was fixed in an oblique direction from the base of the first to the second metacarpal, stabilizing the radial side. Afterwards, the other wires were also fixed: one transversally and two longitudinally, following the axis of the central metacarpals Fig. 3b 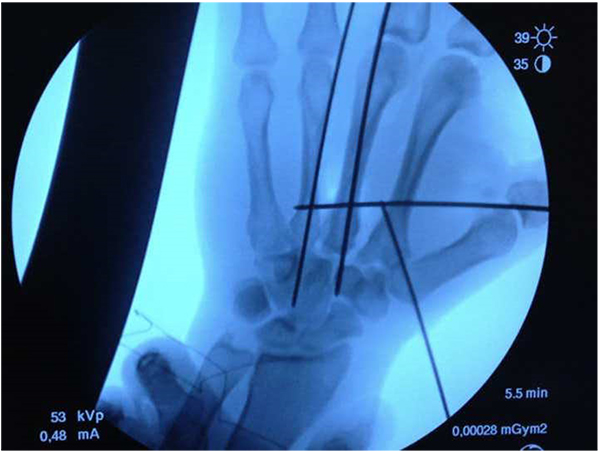 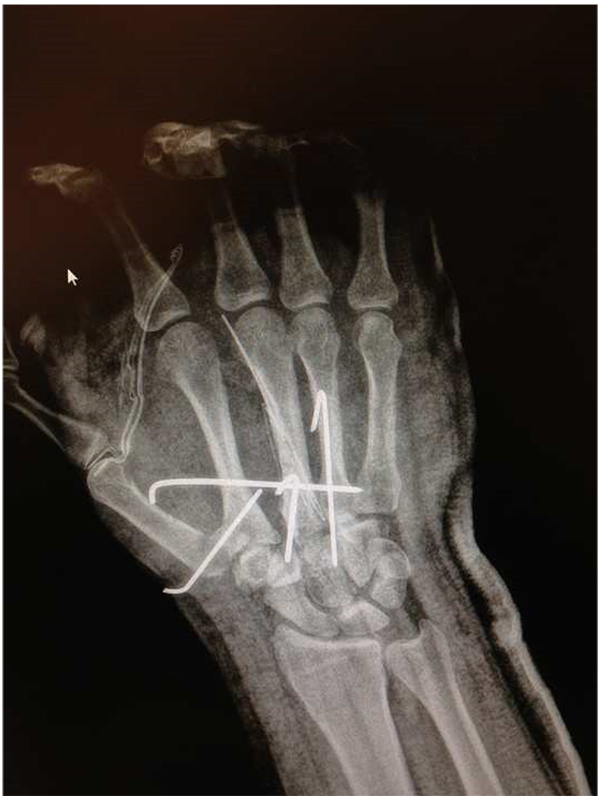 ). Daily treatment of the wounds and mobilization of the metacarpo-phalangeal joints was started the day after the operation to avoid a limitation of the mobility of the fingers secondary to prolonged immobilization. Six weeks later, the Kirschner wires were removed radiologically and the correct carpometacarpal stability was checked clinically. The wounds exhibited correct healing (Figs. 4a 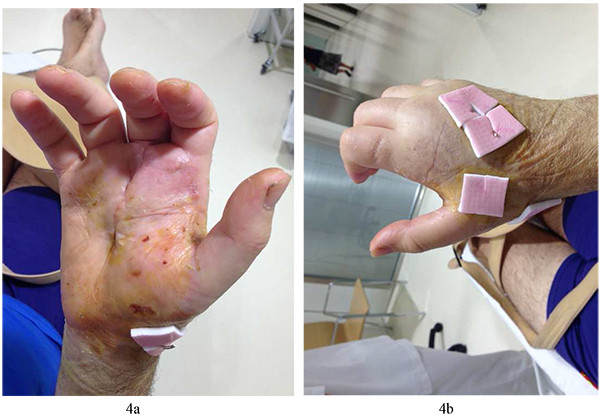 ) and eight weeks later the patient was able to move his fingers without pain and with a strength comparable to that of the other hand.

The ligament and skeletal anatomy of the second through the fifth CMC joints has not been well described in the literature. Recognizing the inconsistent reports of the ligament anatomy, Nakamura et al. [13Nakamura K. Pat terson RM, Viegas SF. The ligament and skeletal anatomy of the 2nd through 5th carpometacarpal joints and their adjacent anatomy. J Hand Surg [Br] 2001; 26: 1016-29.
[http://dx.doi.org/10.1053/jhsu.2001.26329] [PMID: 11721245] ] performed an extensive and decisive study of 80 cadaver wrists to delineate and describe the ligament anatomy of this area. The diagnosis of this kind of injury is not always easy due to the large edema found in the hand and the difficulty to properly see the carpometacarpal joints on radiographies. Swelling around the wrist with shortening of the knuckle should alert the clinician towards the possibility of such an injury. On routine anteroposterior view, overlapping of joint surfaces, loss of parallelism, and asymmetry at the carpometacarpal joints should raise suspicion of the possibility of a subtle carpometacarpal injury. It is essential to perform radiological projection in pure oblique and lateral positions in order to be able to diagnose these kinds of injuries [14Tingart M, Bäthis H, Bouillon B, Tiling T. [Dorsal carpometacarpal dislocation of the fifth finger: Discussion of diagnosis and therapy on two cases]. Unfallchirurg 2000; 103(1): 76-80.
[http://dx.doi.org/10.1007/s001130050012] [PMID: 10663110] ]. The treatment consists in the closed reduction when possible and fixation of Kirschner wires in cases of unstable injuries. When facing large open wounds or when it is impossible to reduce the dislocation in a closed way, it is necessary to resort to an open reduction. To the best of our knowledge, this is one of the few cases in which a volar dislocation of the three middle metacarpals linked with a Bennett’s fracture is described. The mechanism of injury in our case could have been a direct thrust over the knuckles that could have forced the metacarpals to rotate from the dorsal to the volar direction, causing dislocation of the middle three carpometacarpal joints and the Bennet’s fracture.

In cases that are diagnosed late, the most frequent complication is a significant reduction of the mobility and strength of the fingers. Therefore, it is important to perform all the necessary radiological projections so as to diagnose these kinds of injuries as early as possible and treat them in the most accurate way. Intensive postoperative physiotherapy is vital for achieving a satisfactory outcome [18Bell T, Chinchalkar SJ, Faber K. Postoperative management of carpometacarpal joint fracture dislocation of the hand: A case report. Can J Plast Surg 2010; 18(3): e37-40.
[http://dx.doi.org/10.1177/229255031001800305] [PMID: 21886432] ].