Osteoid osteoma is a benign bone tumour that mostly affects males in the second and third decade of their life. The lesion mainly occurs in long bones, usually in the femur and tibia, causing severe localized pain that is worse at night and responds to nonsteroidal anti-inflammatory drugs (NSAIDs). Diagnosis is usually made on the basis of history and radiographic findings. However, in more unusual locations as the hand and foot, diagnostic issues can arise. Treatment often includes complete removal of the tumor. We present a 22 year old male with osteoid osteoma involving the distal phalanx of the hallux. To our knowledge very few cases of great toe osteoid osteoma have been reported in the literature.

The characteristic pain pattern and clinical findings as swelling and deformity should raise a high suspicion for the diagnosis of osteoid osteoma (OO). Plain radiography is the initial diagnostic modality that can reveal the typical radiolucent nidus surrounded by an area of sclerotic bone. However, in more complex anatomic locations, bone scintigraphy has been used, where the lesion presents as a focal area of high uptake. Also, computerized tomography can provide better detail and aid in differential diagnosis. The use of MRI is somewhat controversial as it can obscure the differential diagnosis with more malignant lesions and lead to overtreatment.

Treatment of OO typically consists of a trial of medical management with NSAIDs with a dramatic decrease in symptoms, which can lead to resolution of the disease [27Kneisl JS, Simon MA. Medical management compared with operative treatment for osteoid-osteoma. J Bone Joint Surg Am 1992; 74(2): 179-85.
[http://dx.doi.org/10.2106/00004623-199274020-00004] [PMID: 1541612] ], although the long term effects and recurrence rates have not been clearly documented. Failure or intolerance of the medical management leads to surgical treatment, which mainly consists of open surgical resection and percutaneous radiofrequency ablation (RFA). Open surgical resection of the OO has been the golden standard in treatment, with minimal recurrence and resolution of symptoms. The morbidity and possible complexity of the open procedure together with the improvement in imaging modalities, have led to an increased use of percutaneous CT-guided techniques such as percutaneous RFA and percutaneous excision. Percutaneous excision involves the insertion of a curette over a CT guided placed wire in the nidus and excision of the lesion. The advantage of the method compared to RFA is the possibility of histologic diagnosis but cortical thinning may lead to a stress riser [28Roqueplan F, Porcher R, Hamzé B, et al. Long-term results of percutaneous resection and interstitial laser ablation of osteoid osteomas. Eur Radiol 2010; 20(1): 209-17.
[http://dx.doi.org/10.1007/s00330-009-1537-9] [PMID: 19657646] ]. RFA has been shown to be a safe and effective treatment with low recurrence rates [29Rosenthal DI, Hornicek FJ, Torriani M, Gebhardt MC, Mankin HJ. Osteoid osteoma: Percutaneous treatment with radiofrequency energy. Radiology 2003; 229(1): 171-5.
[http://dx.doi.org/10.1148/radiol.2291021053] [PMID: 12944597] ] and low morbidity. The main limitations of RFA are the lack of tissue for a histologic diagnosis, the possibility for damage to neural tissue if applied in close proximity and also skin damage.

A 22 year old male patient was admitted in our department with right hallux pain for the past 18 months. There was no history of injury. The pain was progressive and worse at night. The pain was initially relieved by NSAIDs but in the last few months only partially and the patient was forced to limit activities due to the pain. There were no constitutional symptoms such as fever, weight loss or malaise.

The distal phalanx of the right hallux was swollen and tender to palpation, with no obvious erythema or increase in temperature (Fig. 1 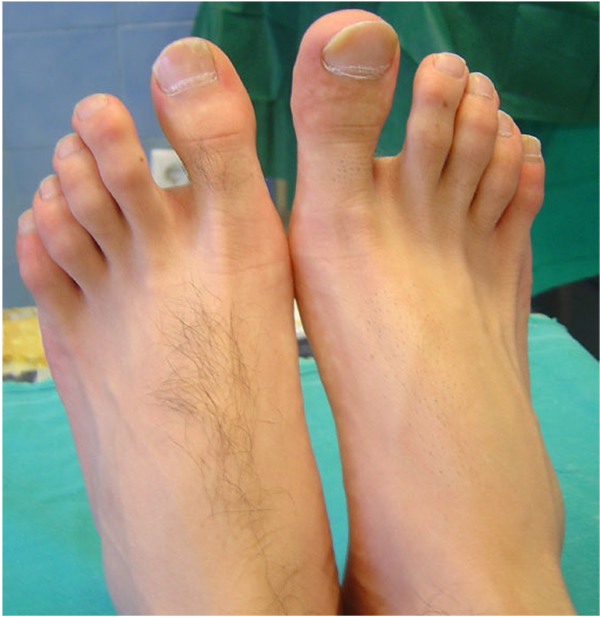 ). The patient was otherwise fit and well. Blood analysis was unremarkable. Radiographic workup included plain x-rays of the foot and a CT scan and revealed a small radiolucency with cortical sclerosis and a nidus formation in the medial side of the distal phalanx of the great toe (Fig. 2 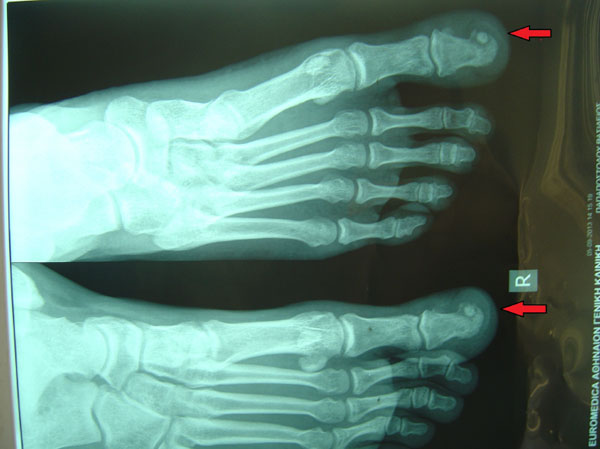 
The patient underwent operative excision of the mass through an antero-medial incision with atraumatic elevation of the nail bed and nail in one layer (Fig. 3 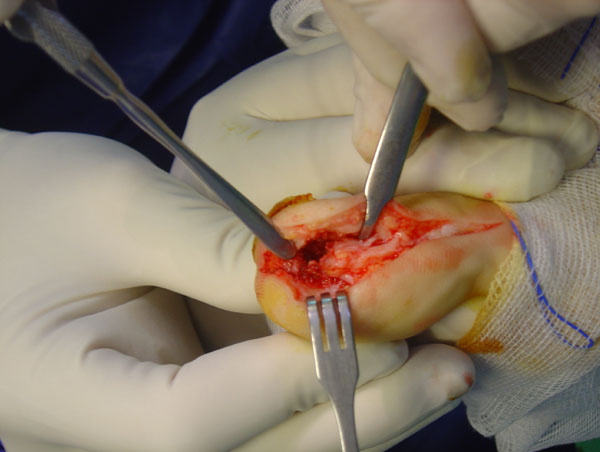 ). Excision of the nidus and surrounding bone to macroscopically healthy borders was performed and histologic samples were sent for analysis (Figs. 4 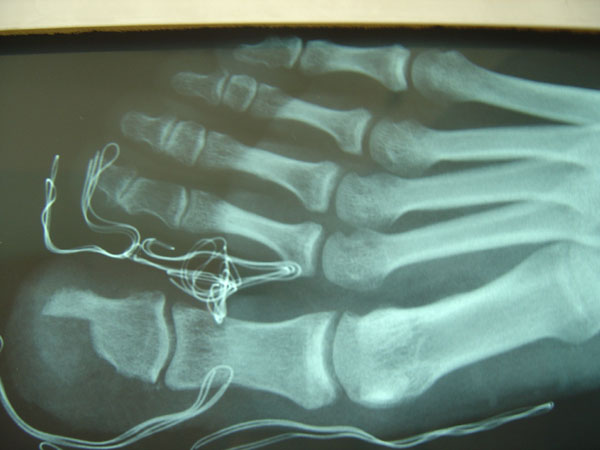 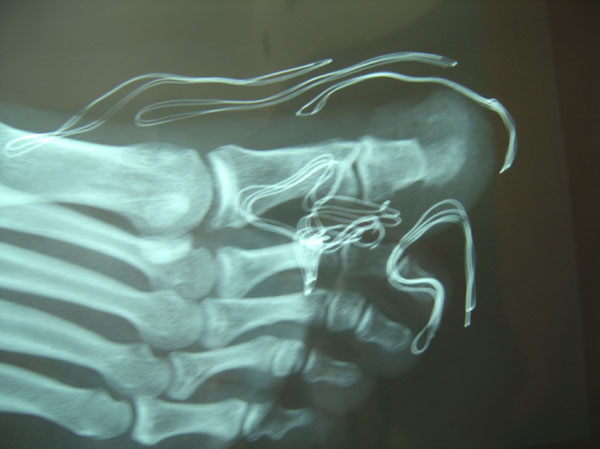 A systematic review of the PubMed Database was conducted. Search results are listed below (Table 1), as well as the keywords that were used. Abstracts of cases in English language were exclusively included for review. Abstracts were reviewed and full text articles were subsequently obtained. Thirteen cases of great toe osteoid osteoma were found in the literature (Table 2), making it a very rare or poorly reported entity.

Osteoid osteoma is a well described rare benign tumour that mostly affects long bones. Localization of the tumor on the great toe of the foot, as described in our case, comprises a rare medical entity, as only few cases have been described according to literature. This fact illustrates the difficulties associated with the early diagnosis and treatment of the lesion. A combination of thorough medical history, radiographic examination and clinical suspicion should lead the clinician to the diagnosis. In our case, total resection of the lesion resulted in complete remission of the patient’s symptoms and no signs of recurrence at two years follow up.