Cadaveric Anatomical Study of Sural Nerve: Where is The Safe Area for Endoscopic Gastrocnemius Recession?

To ascertain in cadavers where the sural nerve crosses the gastro-soleus complex and where the gastrocnemius tendon merges with the Achilles tendon in relation to the calcaneal tuberosities.

Twelve cadaveric lower limbs (6 right and 6 left) were dissected. The distances between the calcaneal tuberosities and the lateral border of the Achilles tendon where the sural nerve crosses from medial to lateral, as well as to the gastrocnemius tendon insertion into the Achilles tendon, were measured.

It is generally safe to place the posterolateral incision more than 14cm above the calcaneal tuberosity to avoid the sural nerve if surgeons plan to use a posterolateral incision for endoscopic recession. The distance between the calcaneal tuberosity to the gastrocnemius tendon insertion into the Achilles tendon is too highly variable to be used as a landmark for locating the gastrocnemius insertion.

But while the open gastrocnemius recession techniques have been the traditional gold standard, endoscopic techniques have gained popularity with its purported advantages of a smaller incision, better cosmesis and faster recovery [8Trevino S, Gibbs M, Panchbhavi V. Evaluation of results of endoscopic gastrocnemius recession. Foot Ankle Int 2005; 26(5): 359-64.
[http://dx.doi.org/10.1177/107110070502600503] [PMID: 15913518] ]. Performing an endoscopic gastrocnemius recession involves placing a posteromedial and/or posterolateral portal over the calf 12cm to 14 cm above the calcaneal tuberosity. After the development of tissue planes, a cannula is advanced; through which an endoscope is introduced. The tendon is then transected under direct vision of the endoscope.

12 fresh frozen cadaveric adult human lower limbs were used for this study. The gastrocnemius origin from the posterior femoral condyle, as well as the knee and ankle joints were intact for each of the dissected specimens.

Dissection and measurement of the cadaveric limbs were carried out by a single, fellowship trained Orthopaedic Surgeon. The limbs were placed in a prone position. A generous midline longitudinal incision was made from the middle of the popliteal fossa to the calcaneal tuberosity for each limb. The gastrocnemius muscles, gastrocnemius tendons and the insertion of the Achilles tendons into the calcaneal tuberosity were visualized. The sural nerve was also identified, explored and its course visualized for all 12 legs. The distances from the calcaneal tuberosity to where the sural nerve crosses the lateral border of the Achilles tendon (Fig. 1 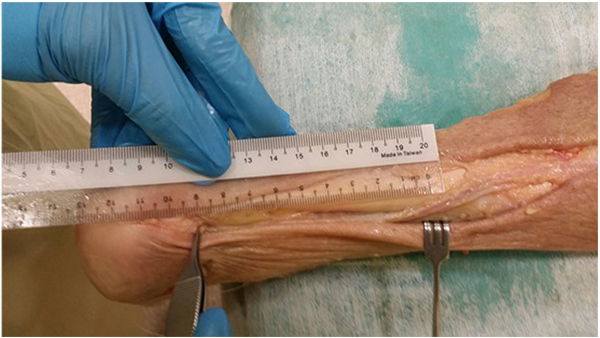 ) as well as the distances from the calcaneal tuberosity to where the gastrocnemius tendon inserts into the Achilles tendon (Fig. 2 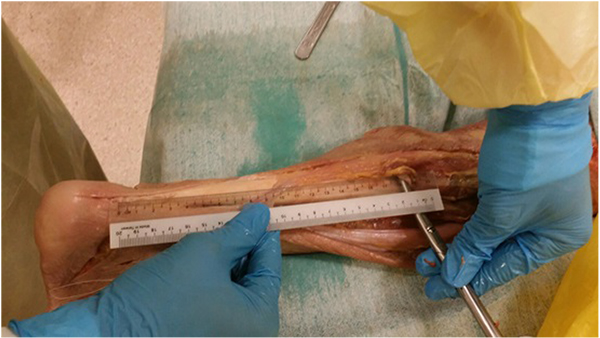 This differential origin of the muscles forms the basis for the Silfverskiold test, which specifically measures gastrocnemius contracture by alternately relaxing and incorporating the muscle because of its origin proximal to the knee joint [11Haddad SL, Deland JT. Pes Planus Mann’s Surgery of the Foot and Ankle 9th ed. 2014.]. Keeping the subtalar joint neutral with the knee being extended, the ankle joint is passively dorsiflexed. The amount of ankle dorsiflexion is noted. The knee is then flexed with the ankle still passively dorsiflexed with the subtalar joint neutral. Any improvement in ankle dorsiflexion is then recorded. Any improvement in the ankle dorsiflexion when the knee is flexed compared to that when the knee is extended, is attributed to the tight gastrocnemius as flexing the knee relaxes the gastrocnemius, rather than the triceps surae complex.

The sural nerve is a sensory nerve formed by branches of the tibial nerve and the common peroneal nerve. Commonly, these are the medial sural cutaneous nerve and the peroneal communicating nerve; however variations in its formation exist. The nerve then runs down the posterior lateral aspect of the gastro-soleus complex and subsequently, the lateral border of the Achilles tendon. It supplies the posterior-lateal aspect of the leg, the lateral foot and the fifth toe [9Webb J, Moorjani N, Real ford M. Anatomy of the sural nerve and its relation to the Achilles tendon. Foot Ankle Int 2000; 21(3): 475-7.] Injury to the sural nerve can result in sensory disturbances to the territory it supplies and a painful neuroma.

Based on our results, the sural nerve crosses the lateral border of the Achilles tendon at a point no more than 14 cm proximal to the calcaneal tuberosity, with an average distance of 9.9cm (Fig. 3 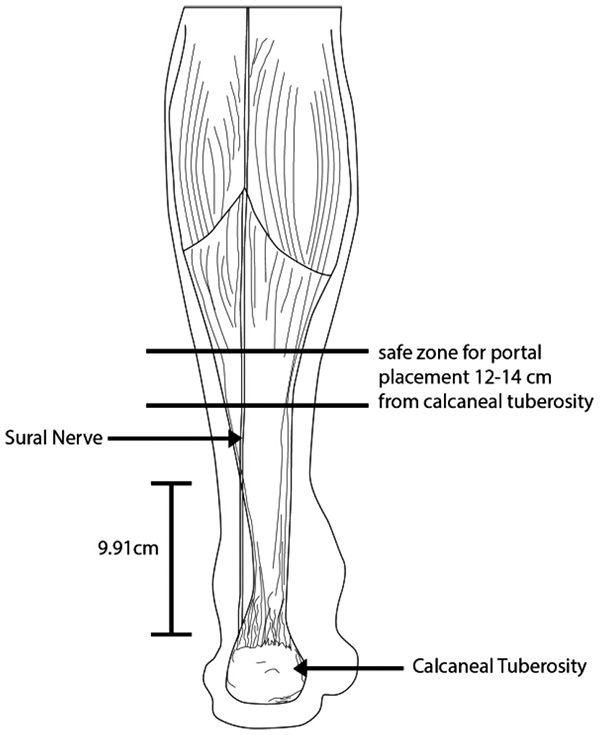 ). This correlates well with other previous studying looking at the anatomy of the sural nerve [9Webb J, Moorjani N, Real ford M. Anatomy of the sural nerve and its relation to the Achilles tendon. Foot Ankle Int 2000; 21(3): 475-7.]. Thus, it is generally safe to place posterolateral incisions at least 14cm proximal to the calcaneal tuberosity if a posterolateral incision is planned for an endoscopic recession. However, injuries to the sural nerve during the gastrocnemius recession is still possible as it is lies posterior to the Achilles tendon and gastrocnemius tendon proximal to where it crosses the lateral border (Table 1).

Our results also showed that the distance in which the gastrocnemius tendon insertions into the Achilles tendon is highly variable, ranging from 17 to 25cm. Based on our cadaveric study, using the calcaneal tuberosity as a guide to where the gastrocnemius tendon inserts into the Achilles tendon may not be reliable. A study by Pinney et al. [12Pinney Stephen J, Sangeorzan Bruce J, Hansen Sigvard T. Surgical anatomy of the gastrocnemius recession (Strayer Procedure). Foot Ankle Int 2004; 25(4): 247-50.
[PMID: 15132933] ] on patients who underwent the Strayer procedure through a posteromedial incision showed that the junction ranged from 10.7 to 20.9cm from the calcaneal tuberosity, with an average of 15.9cm. The ratio of this distance to the length of the leg was also variable from 0.33 to 0.6. It has been suggested that this junction is usually 18mm below the gastrocnemius indentation in this study and this is recommended as a landmark for making the posteromedial incision 2cm distal to the indentation and dissecting proximally.