Intramuscular myxomas are rare, benign mesenchymal tumors in the musculoskeletal system, and usually, the tumors arise in the large muscles of the thigh, buttocks, shoulder, and upper arm. However, a tumor of the forearm is very rare. Herein, we describe the case of an intramuscular myxoma in the supinator muscle of a 56-year-old female patient.

Magnetic resonance imaging showed a well-defined mass that was hypointense with the peritumoral fat ring sign. The differential diagnoses might have been myxoma, schwannoma, or intramuscular hemangioma. The histopathological image showed abundant myxoid tissue, hypocellularity, and poor vascularization. The cells of the tumor were spindle and stellate-shaped with normochromic nuclei. Based on these findings, the pathological diagnosis was an intramuscular myxoma. After excising the tumor, the patient had transient posterior interosseous nerve palsy.

This tumor is curative by resection in toto; however, when the tumor exists in the forearm, surgeons should be careful to avoid damaging surrounding tissues because the tumor is very hard and relatively large compared to the forearm.

A 56-year-old female patient was referred to our hospital for a mass lesion in her forearm that had been growing slowly, and she had no history of trauma, infection, fever, or weight loss. During medical history taking, we found that a needle biopsy was performed 4 years ago in another hospital, and the result of the cytology examination was class II. The patient also complained of extension lag of the metacarpophalangeal joint of the middle finger that had gradually proceeded without sensory loss. The physical examination revealed an ill-defined area of swelling at the middle part of the forearm. The palpable mass was swollen, measured about 30×30 mm, was smooth and fixed without tenderness or the Tinel’s sign, and had very hard elasticity.

The patient was evaluated with radiography, Computed Tomography (CT), and Magnetic Resonance Imaging (MRI). On the x-ray, there was no scalloping, osteolysis, pathological fracture of the radius or ulna, or calcification of soft tissue. On the CT scan, the mass had a low density within the right supinator muscle. The MRI scan of the right forearm revealed a 37×22×27-mm well-defined mass that was hypointense; additionally, the peritumoral fat ring sign was indicated on T1-Weighted Images (T1WI) (Fig. 1 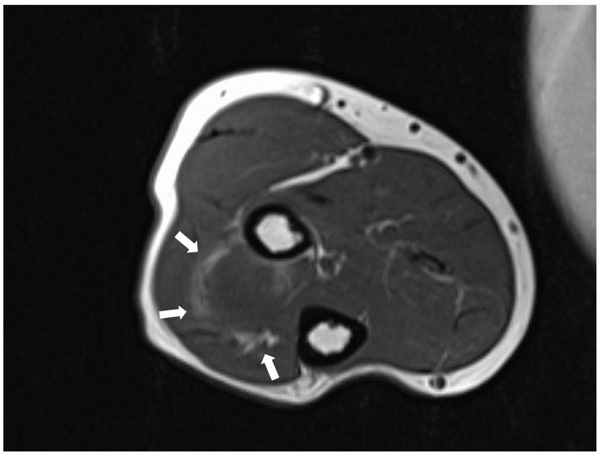 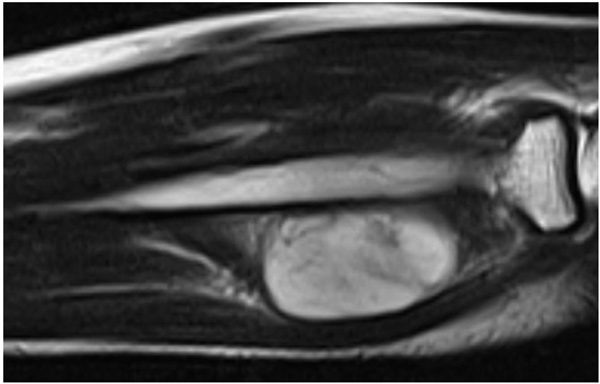 ). Intravenous Gadopentetate Dimeglumide of Gadolinium (GDG) enhancement revealed peripheral enhancement of the mass with linear stranding inside the tumor (Fig. 3 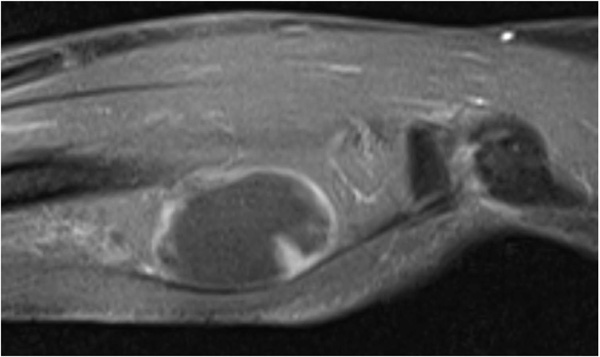 ). The imaging findings characterized the mass as intermuscular myxoma; the differential diagnosis might have been myxoma, schwannoma, or intramuscular hemangioma.


Surgical resection was performed under general anesthesia. Local surgical excision of the tumor was performed over the tumor site between the musculus extensor carpi radialis brevis and extensor digitorum communis, taking care to avoid damaging the posterior interosseous nerve. The mass was a well-capsulated cystic, solid, well-defined mass with hard elasticity in the supinator muscle, and it was excised in an en bloc manner from the normal muscle.

During the histological examination, a cut section of the mass showed glossy grey-white glistening gelatinous areas macroscopically. Microscopy showed that the cells were spindle and stellate-shaped, and collagen fiber was in abundance in the mucoid hypocellular material of neoplasms with low vascularity (Fig. 4 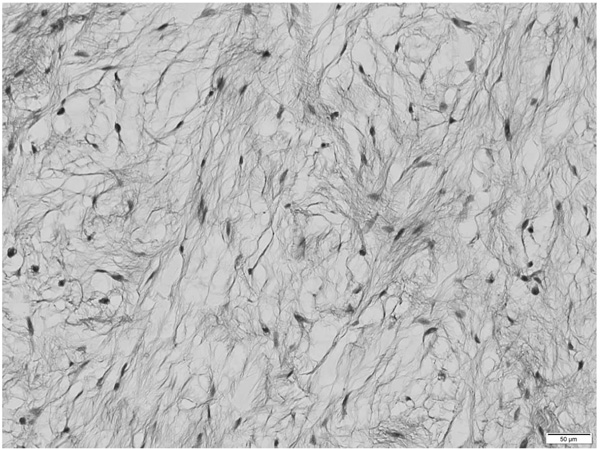 ). Mitotic activity, necrosis, and nuclear atipias were not seen. Based on these findings, the pathological diagnosis was an intramuscular myxoma.


Postoperatively, there was no problem during the process of wound healing. However, she had difficulty extending the metacarpophalangeal joint of the right fingers without sensory disturbance. The Manual Muscle Testing System [5Daniels L, Worthingham C. Muscle testing techniques of manual examination 5th ed. 1986.] showed that the muscle power values of the extensor digitorum, extensor digiti minimi, extensor indicis, extensor pollicis longus, and extensor carpi ulnaris were 0. The muscle power value of the extensor carpi radialis was 3.

She did not undergo an electrophysiological examination; however, on the basis of findings from physical examinations, we made a diagnosis of posterior interosseous nerve palsy due to compression during the operation. We prescribed an orthosis for functional recovery of her fingers. Three months postoperatively, the posterior interosseous nerve palsy improved completely. She has not shown any signs of recurrence detected by MRI 1 year later.

Intramuscular myxomas usually have a cystic-like appearance on a radiograph, homogeneous low-density lesion appearance on a CT scan, hypointense appearance on T1WI, and hyperintense appearance on T2WI. Fat or edema in the surrounding muscles, the so-called peritumoral fat ring sign, on T1WI and increased signal in the adjacent muscle on T2WI are diagnostic signs for distinguishing intramuscular myxomas from other myxoid tumors. Additionally, GDG may show peripheral and internal enhancement [10Luna A, Martinez S, Bossen E. Magnetic resonance imaging of intramuscular myxoma with histological comparison and a review of the literature. Skeletal Radiol 2005; 34(1): 19-28.
[http://dx.doi.org/10.1007/s00256-004-0848-9] [PMID: 15538560] ]. In the current case, almost all the aforementioned findings were present. Therefore, the diagnosis by imaging was consistent with that of previous reports. In 65%–89% of myxomas, a thin rim of fat (or approaching adipose tissue signal intensity because of volume averaging) is noted most prominently at the superior and inferior poles of the lesion, representing atrophy of the adjacent muscle [11Petscavage-Thomas JM, Walker EA, Logie CI, Clarke LE, Duryea DM, Murphey MD. Soft-tissue myxomatous lesions: Review of salient imaging features with pathologic comparison. Radiographics 2014; 34(4): 964-80.
[http://dx.doi.org/10.1148/rg.344130110] [PMID: 25019435] ]. The target sign is commonly seen in neurofibroma (58%) but can also be detected in schwannoma (15%). This sign refers to a low to intermediate T2-weighted signal intensity located centrally secondary to fibrous tissue with a higher collagen content and high T2-weighted signal intensity located peripherally, probably related to myxoid (high water content) tissue [12Banks KP. The target sign: Extremity. Radiology 2005; 234(3): 899-900.
[http://dx.doi.org/10.1148/radiol.2343030946] [PMID: 15734940] ]. If the peripheral myxoid component is predominant, the lesion may be confused with other myxoid lesions, particularly on images obtained with fluid-sensitive sequences. Hence, it is important to distinguish the fat ring sign of myxoma from the target sign of neuroma.

Intramuscular myxomas are usually treated with local surgical excision, and recurrences are very rare. Surgeons have to remove the tumors with a clear margin because local recurrences result from incomplete resection. Our patient had no symptoms of recurrence clinically and radiographically 1 year after resection.

We described the rare case of an intramuscular myxoma in the supinator muscle. The tumor is curative by resection in toto; however, when the tumor exists in the forearm, surgeons should be careful to avoid damaging surrounding tissues.

All work for this human case was conducted in accordance with the Declaration of Helsinki (1964). No animals were used in the research.

The patient was informed that this case study would be submitted for publication, and she provided informed consent.

The authors thank Mr. Takao Inoue for his contributions to this study.