It is commonly believed that delay in fracture fixation of more than two weeks results in increased Surgical Time (ST), due to scar and callus formation at the fracture site. Reducing ST can lower hospital costs and decrease radiation exposure.

Quality control mechanisms can be utilized to lower hospital costs associated with these types of fracture treatments. Treating distal radius and ankle fractures as out patients can reduce hospital costs, but may result in significant delays in the time of surgery. A prevailing hypothesis is that delayed fracture fixation results in a larger amount of scar and callus tissue formation [6Miclau T, Lu C, Thompson Z, et al. Effects of delayed stabilization on fracture healing. J Orthop Res 2007; 25(12): 1552-8.
[http://dx.doi.org/10.1002/jor.20435] [PMID: 17593540] ], leading to longer surgical times. Thus, delaying surgery for two weeks or more (enough time for initial callus to form) may lead to longer surgical times as well as increased radiation exposure to the patient and operating room staff. The specific effect of time to fracture fixation on the ability of the surgeon to execute surgical steps is unknown. Research has been conducted on how the timing of surgery affects wound infection or functional outcomes, but only one study mentioned operative times between early and delayed treatments for ankle cases [7Konrath G, Karges D, Watson JT, Moed BR, Cramer K. Early versus delayed treatment of severe ankle fractures: A comparison of results. J Orthop Trauma 1995; 9(5): 377-80.
[http://dx.doi.org/10.1097/00005131-199505000-00003] [PMID: 853 7839] ].

The goal of this study is to investigate whether early fracture care (≤ 2 days after injury) results in decreased surgery time and radiation exposure compared to delayed fracture care (> 14 days after injury) for bimalleolar ankle and distal radius fractures. Our hypothesis was that delaying distal radius or ankle ORIFs will lead to increased surgical time and radiation exposure.

A retrospective chart review was conducted at a level one trauma center. This study was awarded Institutional Review Board (IRB) exemption by our institution’s committee for health research. We queried the operating room registry for radius and ankle fractures that underwent open reduction and internal fixation between October 2014 and October 2017. From there, we screened for adult age between 18 and 65. Children were excluded from the study due to the likelihood of alternative fixation strategies. Patients above 65 were excluded due to the likelihood of osteoporotic (pathologic) bone, requiring alternative strategies for reduction and fixation, and because the majority of the patients older than 65 with distal radius fractures are treated non-operatively in our institution. A trauma fellowship-trained orthopedic surgeon selected cases with only a single volar locking plate for the distal radius and constructs consisting of 2 medial malleolar screws, third tubular plate on the fibula, and up to 1 syndesmotic screw for the ankle. Any cases with additional screws or fixation devices and additional surgeries were excluded to maintain the study population as homogeneous as possible. Ankle fractures were classified according to the Weber classification. Distal radius fractures were classified as being intra-articular or extra-articular. Open fractures were identified as such, but included in the final analysis, since it was felt that the added irrigation and debridement time will not be significant enough to sway the results in a clinically significant way. We included in our final analysis only bimalleolar ankle cases and distal radius cases that occurred ≤ 2 days or > 14 days after injury.

Statistical analysis was performed using Microsoft Excel for Mac (Version 16.9) and R version 3.5.0 (2018- 04-23). Primary outcome variables were Surgical Time (ST) measured in minutes and radiation exposure (measured in minutes and milligrays). We used means, standard deviations and confidence intervals to describe the primary variables and patients age. The Shapiro-Wilk normality test was used to test whether we could use parametric test to analyze the data. After verifying normality (p values for all datasets were > 0.05) a student’s t-test was used to identify statistically significant differences between the study populations. A p value of < 0.05 was considered statistically significant. 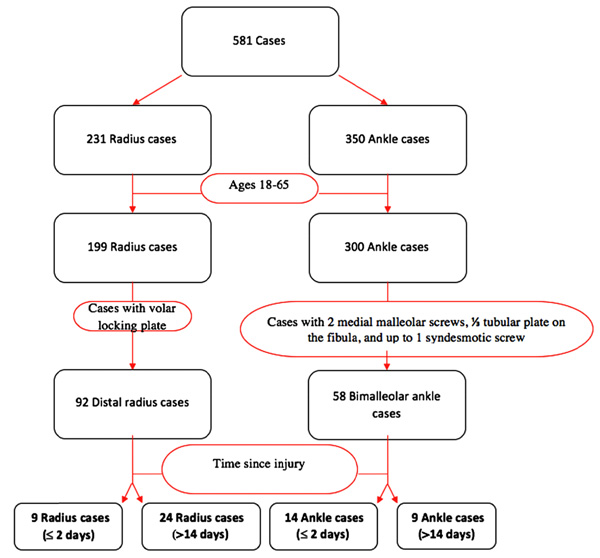 ) summarizes how the final study population was obtained.

This study is the first to report on the relationship between delaying surgery and surgical time for distal radius and bimalleolar ankle fractures. Prevailing thought among orthopaedic traumatologists is that delaying surgery will lead to increased callus formation at the fracture site [6Miclau T, Lu C, Thompson Z, et al. Effects of delayed stabilization on fracture healing. J Orthop Res 2007; 25(12): 1552-8.
[http://dx.doi.org/10.1002/jor.20435] [PMID: 17593540] ] and possibly increased difficulty and time of surgery. Our hypothesis, therefore, was that delaying surgery would increase both surgical time and use of fluoroscopy during surgery. This hypothesis was rejected by our study since we could not demonstrate any adverse effects of delaying surgery in both ankle and distal radius Open Reduction and Internal Fixation (ORIF).

This study has some noteworthy limitations. Firstly, the study is retrospective in nature and was conducted at only one institution. Therefore, it is uncertain whether the results are generalizable to other trauma centers. Secondly, the surgeries that underwent ORIF for both the ankle and distal radius group were not performed by a single surgeon. This adds variability to the data since different surgeons conduct ORIF at their own respective pace. Thirdly, the ankle group included some cases with the incorporation of the syndesmotic screw and some without. The reason for the surgeon variability and inclusion of up to one syndesmotic screw was the limited data provided by the operating room registry for only the last 3 years. Finally, because of the small sample size, this study may have been underpowered to detect a statistically significant difference between the sample groups. Although not reaching statistical significance, there was a trend (p=0.06) in the ankle fracture group toward decreasing surgical time with early surgery. However, this trend was not seen when we excluded open fractures and there was an opposite trend in the distal radius fractures. These findings together suggest that the overall conclusions of the study were unlikely to change even with larger sample size. Moving forward, a prospective study with fewer surgeons can be conducted to attempt to show a clearer relationship between delay in surgery and operation length.

This study was not able to demonstrate that delaying ORIF of bimalleolar ankle fractures and distal radius fractures resulted in a clinically or statistically significant increase in procedure time or radiation exposure. Based on the results of this study, the surgeon should take into consideration other factors (reported outcomes, cost, health system operational consideration, etc.) in making the decision about surgical timing. A larger prospective clinical trial is warranted to confirm these findings.

This study was awarded Institutional Board Review (IRB).

Authors have not received grant support or research fun-ding, and do not have any proprietary interests in the material described in the article or any other conflict of interest.

We would like to thank Luke Karl for his help in data collection.