A 13-year-old boy complained of shortness of his left arm with the desire for lengthening.

The X-Ray showed the enlarged ellipsoid shaped humeral epiphysis in varus position and irregular joint surface. The MRI documented a distorted bone structure involving the complete epiphysis, overgrowth of the tuberosities and partial closure of the physis. MR-angiography revealed normally appearing vessel formation; however, a biopsy was recommended to rule out a vascular malformation. A tru-cut needle biopsy confirmed the diagnosis of enchondromatous changes.

As the patient felt strongly disturbed by the shortness of his arm, lengthening was performed using the fully inserted magnetic driven PreciceR nail.

This case is of interest as epiphysial enchondromas are rare and complete involvement of the proximal humeral epiphysis causing growth deficiency to our knowledge has never been described before. Lengthening using a device penetrating the cartilaginous region is debatable; however, so far, sarcomatous dedifferentiation in epiphysial enchondromas has not been described.

At age 13, 6/12 years, the patient consulted a pediatric surgeon because of the shortness of his left upper arm with a strong desire for lengthening. Physical examination was normal except for the upper arm length difference of about 11 cm, about one-third of the length of the right normal humerus and mildly limited range of motion. The possibility of lengthening using an external fixator was discussed. X-Ray documentation for planning then revealed the impressive changes of the proximal humerus (Fig. 1 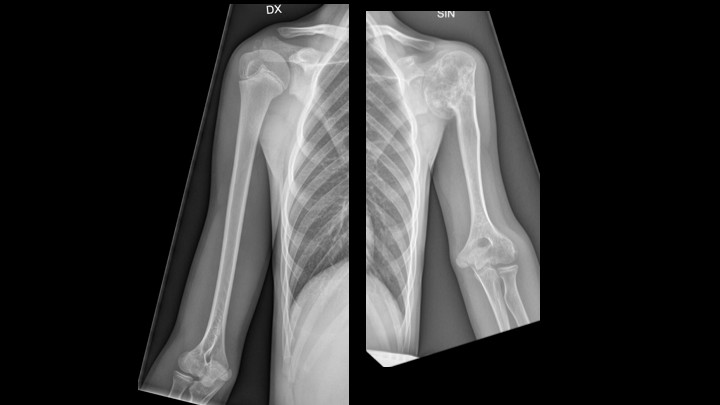 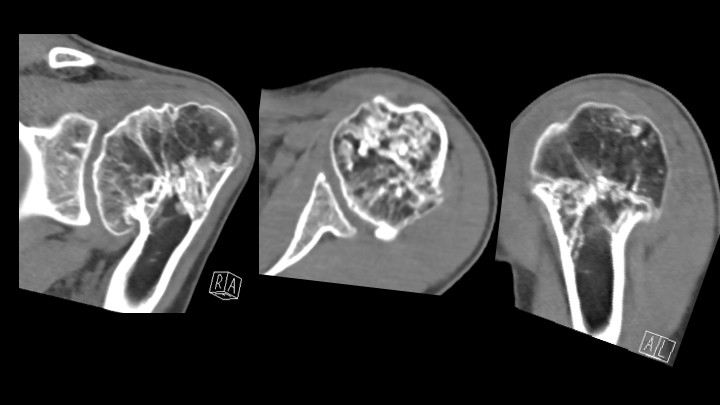 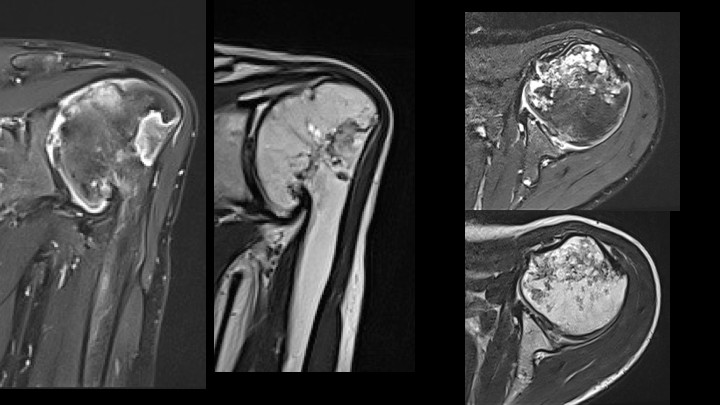 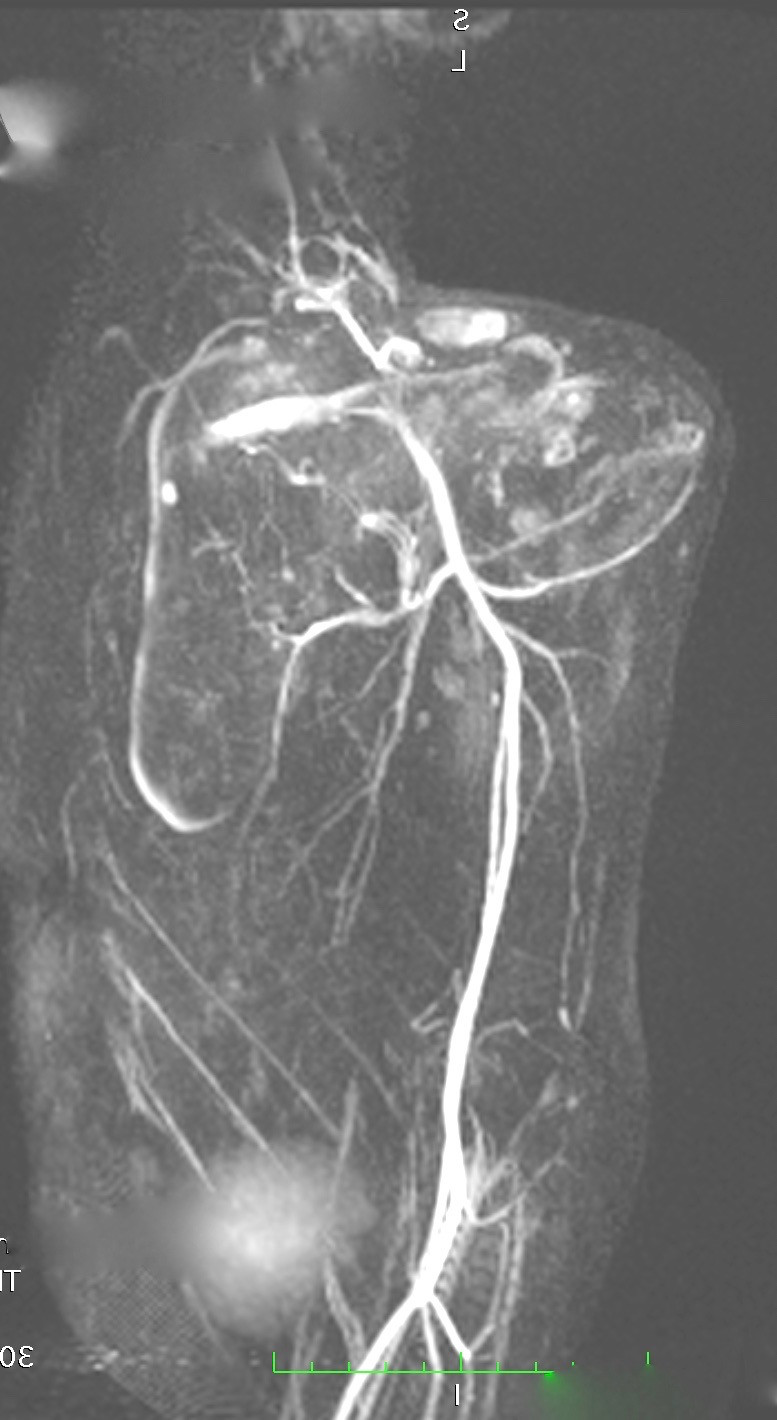 ) showing the complete involvement of the proximal humeral epiphysis including the tuberculi. To prove the diagnosis and rule out a vascular malformation component, a tru-cut core biopsy was performed revealing lobulated cartilaginous tissue compatible with enchondroma (Fig. 5 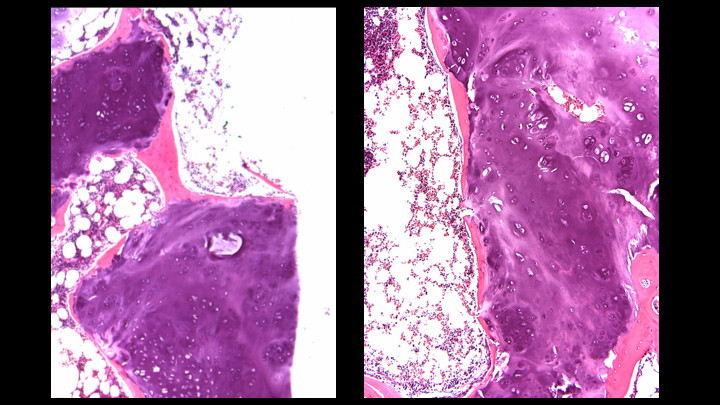 As the patient continued to ask for lengthening, the option of using an internal device was proposed.

In the literature, no dedifferentiation of epiphysial enchondromas into sarcomatous changes has been reported; it, therefore, appeared permissible to cross the enchondroma to use the fully inserted PreciceR nail for lengthening, which minimally interferes with soft tissue structures.

A total lengthening of 13 cm was required to achieve equal length at maturity, including about 2.5 cm of remaining growth in the right proximal humeral physis. The maximum telescoping of the presently available PreciceR humerus nail for this short humerus is only 2 cm. Therefore, a PreciceR tibia nail was used, allowing for 5 cm telescoping, which, however, had to be exchanged to new devices twice to reach 13 cm. Thus 3 new nails had been used for this patient. In a recent report of lengthening a humerus with the Precice Nail [4Zak L, Tiefenboeck TM, Wozasek GE. Innovative Technique in Extended Intramedullary Humeral Lengthening: A Case Report. JBJS Case Connect 2019; 9(3)e0174
[http://dx.doi.org/10.2106/JBJS.CC.18.00174] [PMID: 31425164] ] to avoid the costs of a new nail instead of exchange of the nail, the locking screws were removed and the nail was backwound 1.5 cm in order to continue lengthening with the same nail and then continue lengthening after reinsertion of the locking screws; however backwinding extended anesthesia by 3 hours. It is difficult to outweigh the cost of exchanging the nails against the risks of prolonged anesthesia time and handling the devices outside the patient. Further development of the lengthening nails is expected to make such procedures unnecessary.

Insertion, locking of the nail followed standard principles from a short incision of the deltoid muscle in line with the fibres and splitting the supraspinatus tendon following over reaming and corticotomy. The function of the lengthening mechanism is checked by an intraoperative lengthening of 1 mm. Lengthening by 1 mm daily in two fractions started after a waiting time of 1 week. When the maximum telescoping of 50 mm was reached, the nails were exchanged to new ones of appropriate length under temporary stabilization by an external fixator to avoid disturbing the formed callus.

The X-ray at the time of final lengthening shows excellent callus/bone formation (Fig. 6 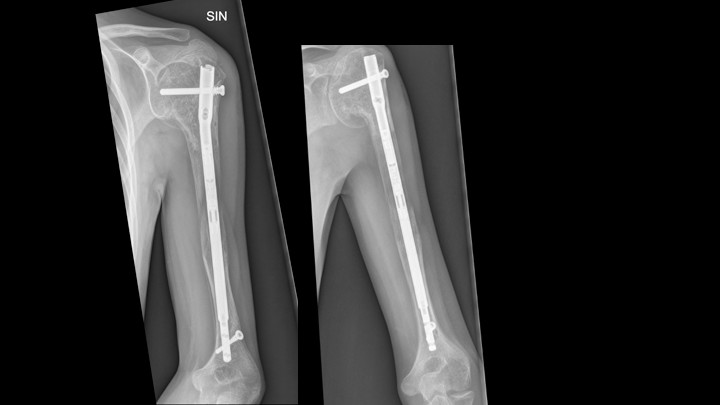 ). The PreciceR nail was removed 15 months after completion of lengthening (March 2019) with excellent remodeling (April 2019, (Fig. 7

). Removal of the nail was indicated to reduce imaging artifacts in follow-up studies and to allow for remodeling in case interventions may be needed later, e.g. arthroplasty. MRI (July 2019, (Fig. 8 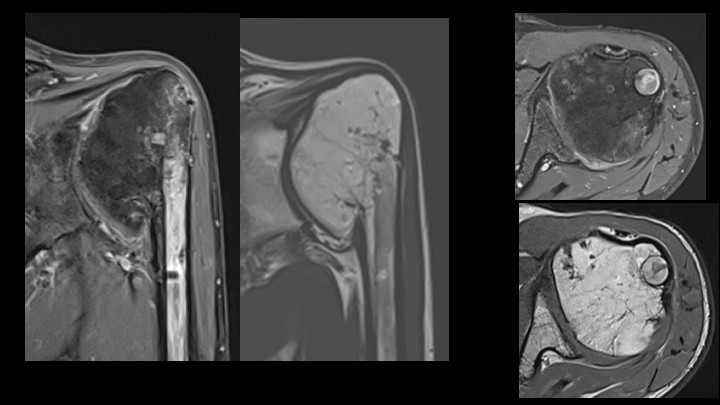 ) 4 months after the removal of the nail shows the physis closed and more varus position of the humeral head; however, the size has not changed compared to the pretreatment documentation. Range of motion had decreased from preoperative December 2016 to last check-up April 2019 for thoraco-humeral forward flexion from 110° to 80°, abduction from 100° to 70°, while internal rotation remained unchanged 100°. On physical examination, the left arm is 1 cm shorter at age 16 years. The patient states that he is absolutely satisfied with the result and denies to be limited by the decreased range of motion.

The universally accepted hypothesis for the development of enchondromas from cartilage rests displaced from the growth plates has recently been challenged by Douis et al. [5Douis H, Davies AM, James SL, Kindblom LG, Grimer RJ, Johnson KJ. Can MR imaging challenge the commonly accepted theory of the pathogenesis of solitary enchondroma of long bone? Skeletal Radiol 2012; 41(12): 1537-42.
[http://dx.doi.org/10.1007/s00256-012-1387-4] [PMID: 22422023] ] as cartilage islands extending into the metaphysis could not be demonstrated in skeletally immature patients. The pathogenesis of epiphysial enchondromas by such mechanism appears even less convincing. The complete involvement of the proximal humeral epiphysis in the presented patient suggests a kind of primary disturbance of the physis and malfunction of the proliferative zone.

Though this patient shows the severe distortion of the anatomy, surprisingly as yet joint function was maintained. Almost all reported cases of epiphysial enchondromas finally needed surgical treatment to maintain or improve joint function by arthroplasty.

The observations in this patient are interesting with regard to the well-preserved shoulder function in spite of the large enchondroma practically replacing the humeral head and the uneventful lengthening with the externally driven fully inserted PreciceR lengthening the nail system.

The study was approved by the ethics committees of the Armed Forces Institute of Pathology and Walter Reed Army Medical Center, USA.

CARE Guideline have been followed for conclusionship this study.

Informed consent is obtained from Patient.