Total Dislocation of the Talus without a Fracture. Open or Closed Treatment? Report of Two Cases and Review of the Literature

Complete dislocation of the talus not accompanied by a fracture is a very rare injury. The injury is encountered as a closed one even more rarely. Reviewing the literature we found that proposed treatments for total talus dislocation varied from primary talectomy or arthodesis (to avoid complications) to closed reduction and an under knee cast. Most importantly, there was no agreement among authors about the method of reduction (open/closed). We report our experience with two cases of closed total talus dislocation not accompanied by a fracture, and review the literature to retrieve evidence on whether a closed or open treatment should be preferred for this type of injury.

Total dislocation of the talus from all its surrounding joints (talonavicular, tibiotalar, subtalar) not accompanied by a fracture (talus, navicular, calcaneus, malleoli) is an extremely rare injury. Its exact incidence is unknown [1Taymaz A, Gunal I. Complete dislocation of the talus - Unaccompanied by fracture J Foot Ankle Surg 2005; 44: 156-8.]. Depending on whether the foot comes to supination or pronation the dislocation can be either anterolateral (the most usual) or posteromedial [2Bas T, Vicent V, Alcantara P, Llabres AJ. Complete dislocation of the talus: a report of 5 cases Foot 1994; 4: 102-5.]. The few case reports found in the literature and the non-existent guidelines add to the confusion regarding the optional method of treatment. Complete dislocation of the talus without an accompanying fracture usually has to do with a young patient at the second to fourth decade of his life. Major complications and in particular infection, avascular necrosis of the talus and post-traumatic arthritis are therefore even more devastating because they affect patients running the most active and demanding period of their lives [3Ries M, Healy WA Jr. Total dislocation of the talus: case report with a 13-year follow up and review of the literature Orthop Rev 1988; 17: 76-80.]. Of these complications, infection mainly depends on whether the injury was open or closed. Avascular necrosis though, is depended on the amount of blood supply that remains to a bone which is notorious for its problematic vascularity. We present our method of treatment in two cases with closed total talus dislocation without fracture. A literature review is attempted, to retrieve evidence on whether a closed or open approach should be chosen in order to minimize complications and augment possibilities for a favorable outcome.

A 35-year-old woman was brought to the emergency room because of a road traffic accident. Her left ankle was swollen and the foot was in slight equinus. There was no sensory or motor loss, but initial vascular assessment was difficult because pulses could not be felt and the capillary refill was borderline. X-Rays (Figs. 1, 2

) revealed an antero-lateral dislocation of the talus with no fracture.

A 45-year-old man was brought to the emergency room because of a motor-bike accident. His major problem was a head injury, but at the same time his left ankle was swollen with a very tensed skin over its lateral side and the foot in slight equinus and supination (Fig. 3 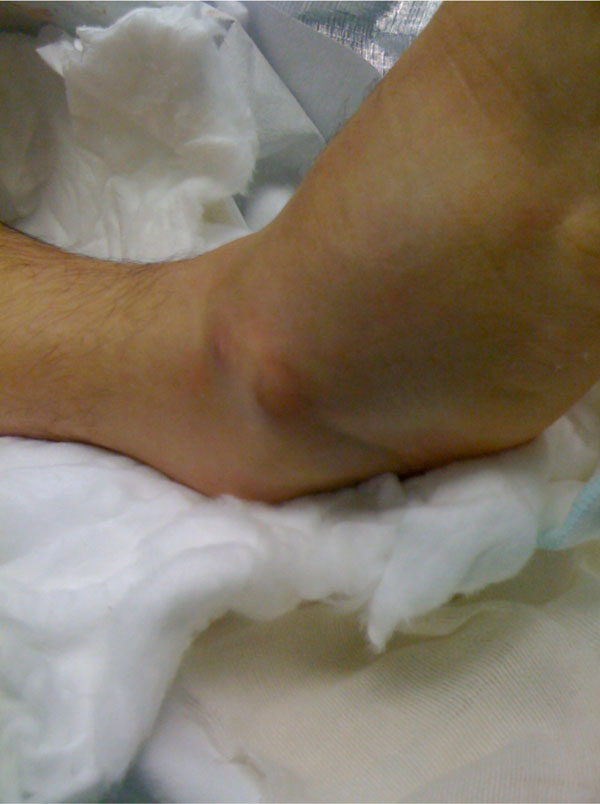 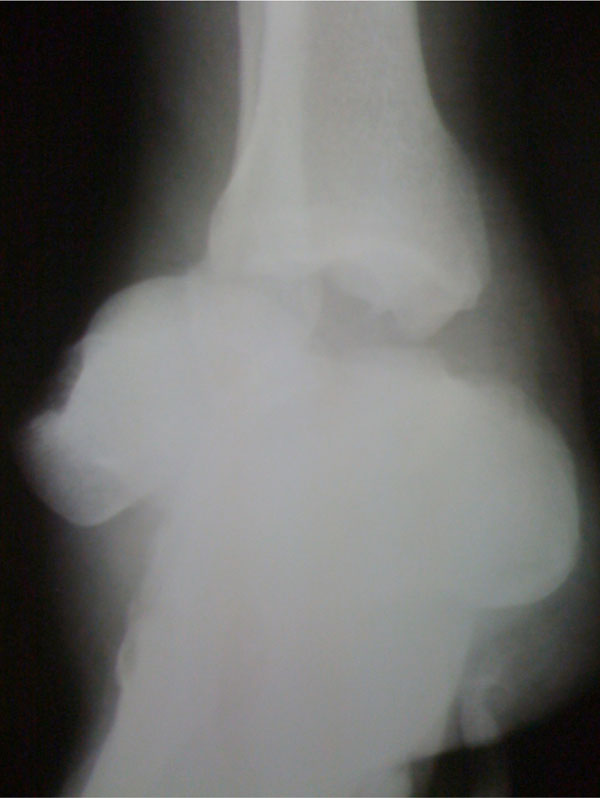 ) without any accompanying fracture.


In both cases a closed reduction was performed under general anesthesia. With the knee flexed to relax the posterior leg muscles, traction was applied to the foot and counter-traction to the tibia. The talus was then pushed to a posterior and medial direction. Reduction occurred relatively easily (Figs. 5, 6

). The reduction appeared stable with manual manipulation and was confirmed radiologically in the operating room (Figs.7 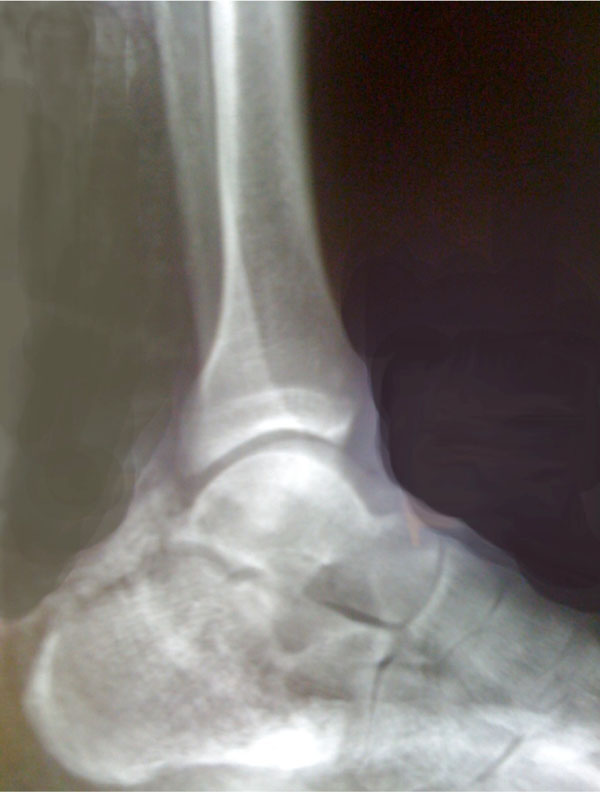 ). After reduction, pulses could be palpated clearly in case I.


In patient I, a below knee back slab and then full plaster cast was applied for a total of 6 weeks. Then partial weightbearing with the use of a walker for 1 week, 1 week with 2 crutches, 1 week with one crutch and finally full weight bearing and motion was allowed at a summation of 9 weeks. The patient was followed up for three years at which time no signs of avascular necrosis or osteoarthritis were detected clinically or radiologically. She had no symptoms, more than 90% range of motion in the ankle and subtalar joints and no degenerative changes on radiographs, an excellent result according to the criteria of Kenwright and Taylor [4Kenwright J, Taylor RG. Major injuries of the talus J Bone Joint Surg 1970; 52B: 36-48.]. Patient II was lost from follow-up. He was a traveler and as soon as his general condition allowed it, he was transferred back to his home country. It was reported to us that one year later he was walking with no problems.

According to Kenwright and Taylor [4Kenwright J, Taylor RG. Major injuries of the talus J Bone Joint Surg 1970; 52B: 36-48.] the incidence of avascular necrosis is depended on the magnitude of displacement of the body of talus. This does make sense because as approximately 60% of the surface of the talus is covered by articular cartilage, only a limited surface is available to provide adequate vascular perforation [11Detenbeck LC, Kelly PJ. Total dislocation of the talus J Bone Joint Surg 1969; 51A: 283-8.]. The major blood supply to the body is provided by the artery of the tarsal canal, a branch of the posterior tibial artery. The superior neck branches of the dorsalis pedis artery supply small areas of the body but have been found to have anastomoses with the other arteries. Arterial anastomoses within the bone are numerous [6Palomo TJM, Cruz RE, Granell BV, Monzonis GJ. Open total talus dislocation: case report and review of the literature J Orthop Trauma 1997; 11: 45-9.].

Impressively, there is clinical and radiological (bone scan, MR angiogram) evidence that in cases of complete anterolateral dislocation of the talus vascularity of the bone was maintained by these superior branches through anterior soft tissue attachments. We are therefore led to believe that any open reduction can have a negative influence to the already bad blood supply of the talus [1Taymaz A, Gunal I. Complete dislocation of the talus - Unaccompanied by fracture J Foot Ankle Surg 2005; 44: 156-8., 6Palomo TJM, Cruz RE, Granell BV, Monzonis GJ. Open total talus dislocation: case report and review of the literature J Orthop Trauma 1997; 11: 45-9., 12Schiffer G, Jubel A, Elsner A, Andermahr J. Complete talar dislocation without late osteonecrosis: clinical case and anatomical study J Foot Ankle Surg 2007; 46: 120-3.].

In our case no avascular necrosis or post-traumatic arthritis occurred according to the clinical findings, comparative X-Rays with the healthy foot and bone scan scintimetries.

Conclusively, literature suggests that in open dislocations of the talus, after an attentive debridement the proper choice should be an open reduction. In closed lesions, we believe that a closed reduction under general anaesthesia must be attempted. If this is impossible an open reduction should be the next step. Special attention should be given to avoid injury of the remaining feeding vessels. Talectomy and arthodesis should be reserved as later salvage procedures.