Dialysis-related spondyloarthropathy is a rare cause of spinal deformity and cervical myelopathy. Optimal management of cervical spine spondyloarthropathy often requires circumferential reconstructive surgery, because affected patients typically have both the anterior column and the facet joints compromised. The occasional presence of noncontiguous or "skip lesions" adds an additional level of complexity to surgical management, because decompression and fusion in an isolated segment of neural compression can worsen spine deformity by applying increased stress to adjacent cervical spine segments. We report two cases of hemodialysis patients who presented with cervical myelopathy and initially had anterior cervical discectomy or corpectomy. Because symptoms recurred due to hardware failure, both patients required posterior spine fusion as well. In retrospect, because of the hardware failure, both of these patients might have benefited from a circumferential (combined anterior and posterior) cervical spine reconstruction as their initial treatment.

We present two hemodialysis patients with cervical myelopathy due to DSA. Both patients initially had anterior column surgery (discectomy or corpectomy, instrumentation and fusion) but later required revision combined with posterior instrumentation due to hardware failure and myelopathy recurrence. 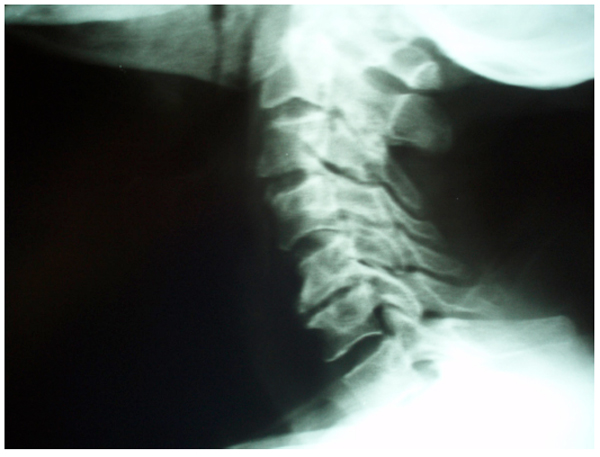 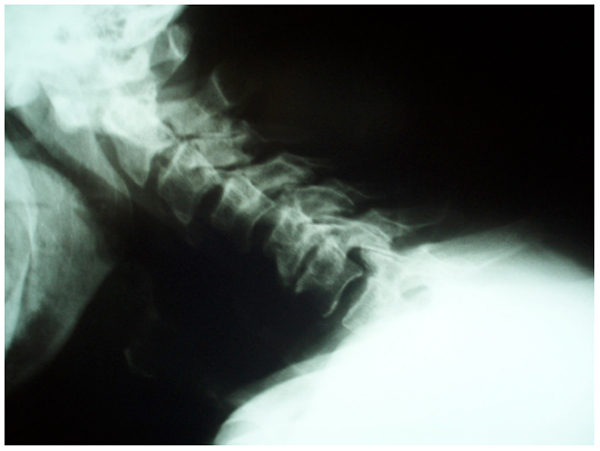 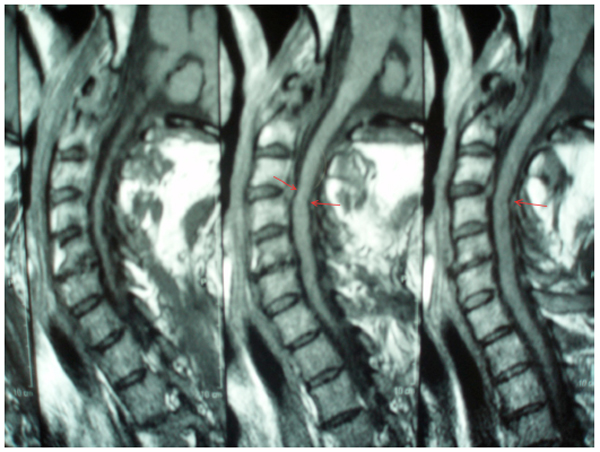 
Based on these findings, the patient had anterior cervical discectomy and fusion at C3-C4 and C4-C5 using PEEK allograft, and anterior fixation with dynamic plate and screws from C3 to C5 (Fig. 4 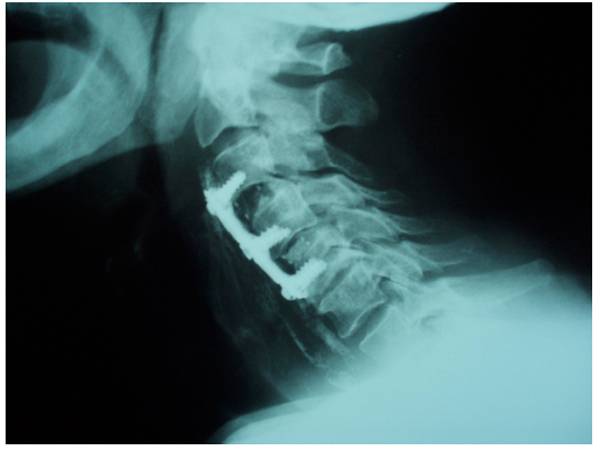 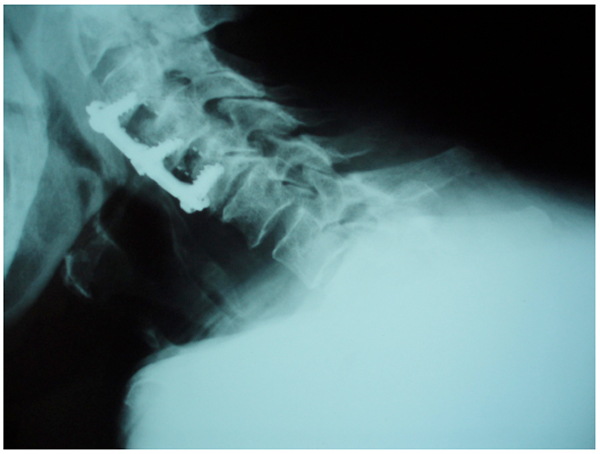 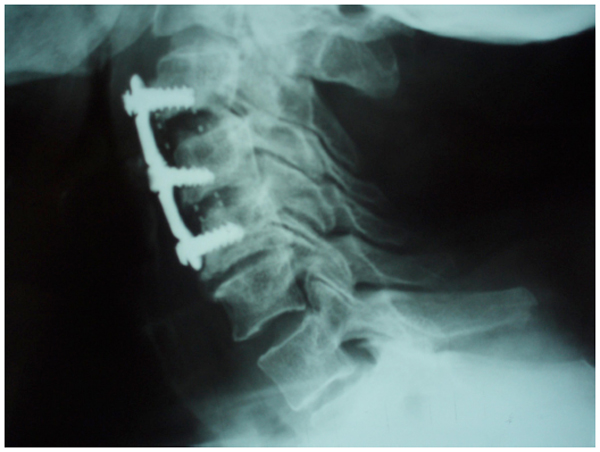 ). Based on these findings, the patient underwent supplemental posterior cranio-cervical stabilization and fusion with occipital and lateral mass screws, rods and allograft (Fig. 7 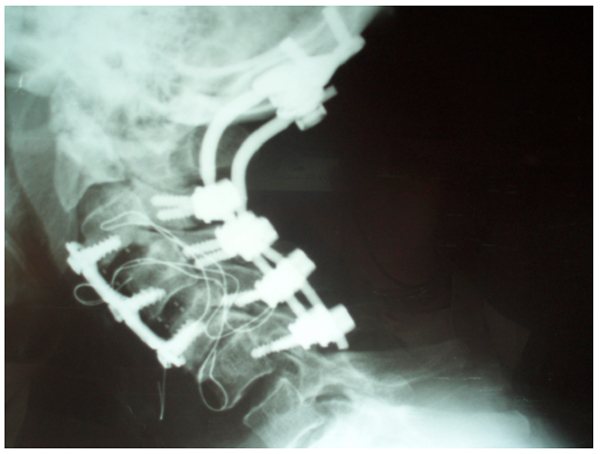 A 77-year-old patient, who had been on hemodialysis for 4 years, came to the Emergency Room for evaluation of bilateral proximal upper extremity weakness, progressively worsening over a 4-day period. The patient also reported worsening neck pain radiating to both arms (C4 and C5 distribution) for 2 months. Neurologic examination demonstrated bilateral deltoid and biceps muscle weakness, but no other abnormal findings. Laboratory evaluation showed elevated urea and serum creatinine levels, consistent with end-stage renal disease. Plain cervical spine films and computed tomography revealed partial destruction of the C3 and extensive destruction of the C4 and C5 vertebral bodies (Figs. 8 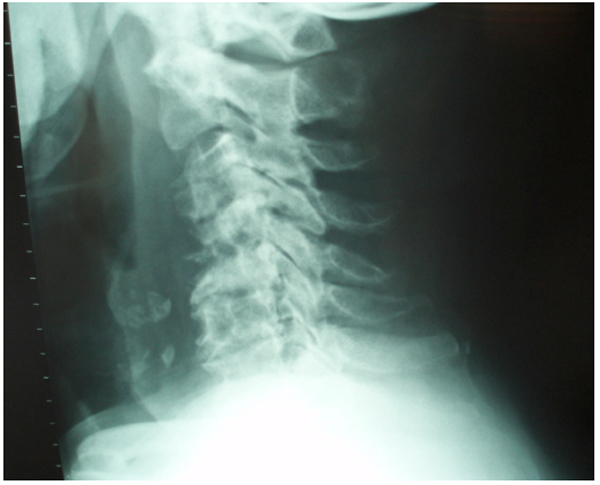 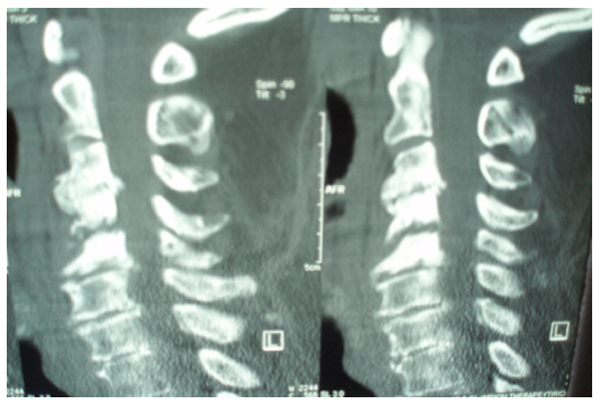 ). MRI scan demonstrated mild compression of the anterior subarachnoid space and impingement of the C5-C6 roots, but no spinal cord abnormalities.


Based on these findings and because upper extremity weakness was progressing, the patient had anterior C4 and C5 corpectomy and fusion using iliac crest autograft and anterior stabilization with dynamic plate and screws from C3 to C6 (Fig. 10 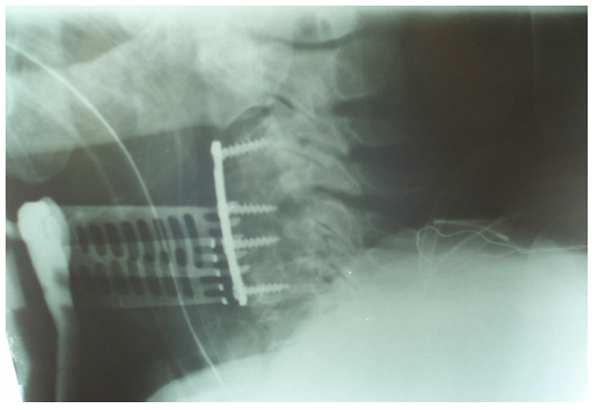 ). In the immediate postoperative period, he noted significant improvement of neck pain but radiculopathy symptoms did not improve. Then, on postoperative day 2, the patient experienced acute, severe neck pain recurrence while ambulating. Repeat cervical spine CT scan showed hardware failure at C3 with anterior shift of the autograft (Fig. 11 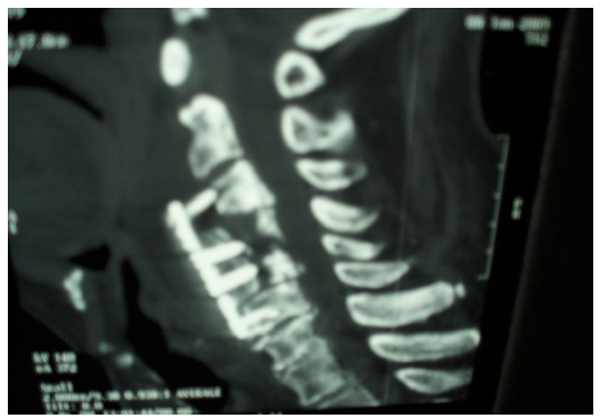 
The patient then underwent repeat cervical spine surgery, which consisted of anterior fusion revision with replacement of the displaced screws and autograft, combined with supplementary posterior fixation and fusion using lateral mass screws from C3 to C7, rods and allograft (Fig. 12 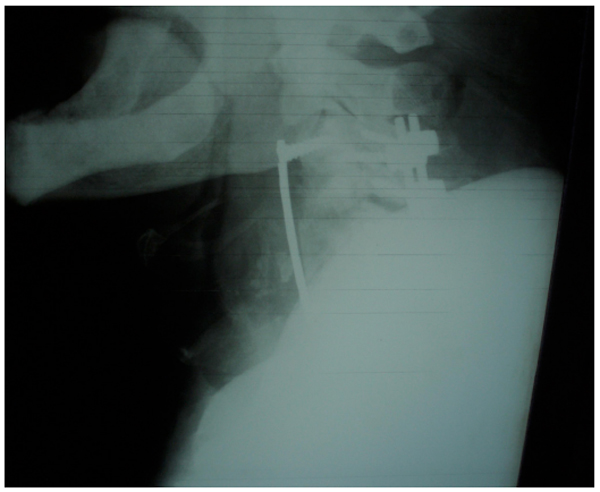 ). Postoperatively, the patient experienced complete resolution of neck and arm pain and moderate improvement of upper extremities weakness. He was discharged home on postoperative day 7, and remains pain-free after 14 months.

The occasional presence of non-contiguous or “skip lesions” in these patients add complexity to surgical management; decompression and fusion at the level of neural compression can lead to deformity, by applying increased stress upon nearby spinal levels where there is bone loss from renal spondyloarthopathy.

In our cases, both patients had signs and symptoms of cervical myelopathy due to spondyloarthropathy and spinal cord compression. Because these lesions were located in front of the spinal cord, we chose to operate through the anterior approach, and proceeded with discectomy or corpectomy and fusion with peek or iliac crest autograft and fixation with dynamic plate. Despite initial improvement, however, both patients sustained hardware failure and symptom recurrence, requiring supplemental craniocervical stabilization or lateral mass screw fixation, respectively, with prompt symtom resolution.

The optimal surgical management of cervical spondyloarthropathy in dialysis-related patients is still unclear [8Yuzawa Y, Kamimura M, Nakagawa H, et al. Surgical treatment with instrumentation for severely destructive spondyloarthropathy of cervical spine J Spinal Disord Tech 2005; 18(1): 23-8.,9Nair S, Vender J, McCormack TM, Black P. Renal osteodystrophy of the cervical spine: Neurosurgical implications Neurosurgery 1993; 33(3): 349-54. Discussion 354-5], and there are no published guidelines or recommendations. However, it seems that patients treated from the beginning with circumferential reconstructive surgery and 360-degree fusion have the best results, with low incidence of symptom recurrence, while avoiding the risks of a second operation [4Abumi K, Ito M, Kaneda K. Surgical treatment of cervical destructive spondyloarthropathy (DSA) Spine 2000; 25(22): 2899-905.]. In our two cases, we chose the anterior approach to surgical reconstruction, due to location of the compression, and also because we wanted to avoid a long circumferential operation. However, because of hardware failure and symptom recurrence, a second operation became necessary in both patients. In retrospect, both of these patients might have benefited from a circumferential (combined anterior and posterior) cervical spine reconstruction as their initial treatment. Based on our limited experience, and also on published relevant experience from other spine surgery centers, we now believe that combined circumferential stabilization and decompression may be the treatment of choice from the beginning in this high risk patient population.

Destructive cervical spondyloarthropathy, occasionally involving non-contiguous spinal segments, can cause spinal instability or neurologic deficits in hemodialysis patients. Surgical management is challenging in this patient population, because of diffuse osteoporosis and slow bony healing, leading to a high incidence of hardware failure. In our opinion, because of the high probability of hardware failure, combined anterior and posterior cervical fixation should be the initial procedure of choice in these patients, thereby avoiding the risk and expense of a second operation in this high risk cohort. However, as not all experts agree on this, and there is clearly some controversy in the literature, more data, preferably from large, rigorous prospective studies are required before the controversy settles and guidelines or consensus statements can be formulated.

This work was supported solely by Department funds. All authors declare they have no conflict of interest to report.