Detailed knowledge of cervical canal and transverse foramens’ morphometry is critical for understanding the pathology of certain diseases and for proper preoperative planning. Lateral x-rays do not provide the necessary accuracy. A retrospective morphometric study of the cervical canal was performed at the authors’ institution to measure mean dimensions of sagittal canal diameter (SCD), right and left transverse foramens’ sagittal (SFD) and transverse (TFD) diameters and minimum distance between spinal canal and transverse foramens (dSC-TF) for each level of the cervical spine from C1-C7, using computerized tomographic scans, in 100 patients from the archives of the Emergency Room.

One hundred patients ≥ 18 years who had cervical spinal multiplanar computed tomography (CT) imaging performed for a variety of reasons were evaluated for this study. Patients were randomly chosen from the authors’ Emergency Room Radiology imaging data bank (level A Trauma Center). Subjects with evidence of infectious, neoplastic, traumatic, or congenital spine anomalies were excluded from the study.

The study group consisted of, 50 males and 50 females. Mean age was 46.73 years (range 20-79). Mean age for males was 48.78 years (range 20-77) and for females 46.59 years (range 26-79) Table 1. CT-scans were performed with the patient supine and the neck at a neutral position. For each level of the cervical spine, axial and sagittal images from C1 to C7 were selected and the following parameters were determined using the measuring tools of the Imaging software: (i) the sagittal canal diameter (SCD) (Fig. 1 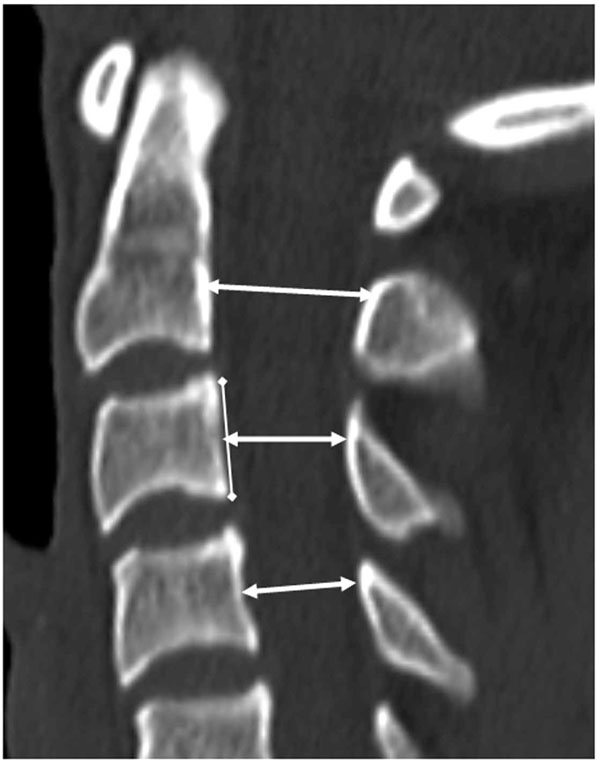 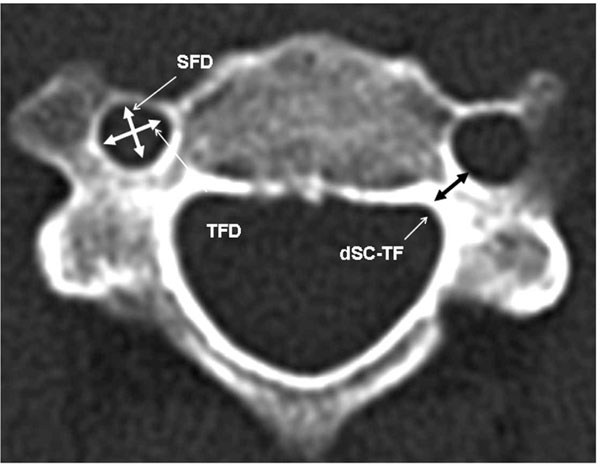 ). The sagittal canal diameters were measured at the midvertebral level where no degenerative changes are to be expected. The data were divided into two size-matched groups: males and females. Statistical analysis was performed using paired t-test.

Patients’ Characteristics (Age in Years, Weight in Kgrs and Height in Meters)

One hundred cervical spines comprising 700 vertebrae from C1 to C7 were evaluated. The means and standard deviations of the parameters were calculated at each level for male and female patients separately. Male and female SCD, SFD, TFD and dSC-TF values were compared.

For both groups, the widest sagittal canal diameter was measured at C1 and the narrowest at C4. Mean SCD was greater in males than in females (Table 2). However, only at the level of C6, a significant difference between male and female SCD was detected (p=0.005). Significant differences of SCD were also detected between C1 and the other levels of the cervical spine for both male and female patients, as well as between C2-C4 for males and C2-C4, C2-C6 and C3-C4 for females ((p<0.05).

Mean ± SD Values for Sagittal Spinal Canal Diameters (SCD). Mean Values were Greater for Males for All the Levels of CS. Only for C6 Level (Bold), a Significant Difference was Detected (p=0.005)

The narrowest mean right distance between Spinal Canal and Transverse Foramens (mean right-dSC-TF) was found at C5 and the widest at C1 for males and at C4 (narrowest space) and C1 (widest space) for females, respectively. Similar results were found for mean left-dSC-TF (Table 4). A significant difference was revealed for both male and female patients between left and right side at the level of C3 (p<0.05). Comparison between males and females demonstrated significant differences at C2, C3 and C4 levels on the left side of the cervical spine (p<0.05), while on the ride side, no significant difference was detected.

Comparison between mean values of the dimensions of the transverse spinal foramens revealed that sagittal and transverse foramens’ diameters are greater in males than in females, for each level of the cervical spine. Moreover at C1 level, sagittal diameter is greater than the transverse, while for all the other levels of cervical spine (C2-C7) the transverse diameter is greater than the sagittal. This phenomenon was equally detected in the two groups of the study (males, females). The measurements showed that the left spinal foramen was found to be greater than the right one. This difference was equally observed in male and female subjects and for each level of the cervical spine, implicating a larger left-sided vertebral artery and a possible asymmetric blood supply of these arteries. This hypothesis has also been proposed by Duan et al. on their work on vertebral artery course and function at the craniocervical junction [24 Duan S, Lv S, Ye F, Lin Q. Imaging anatomy and variation of vertebral artery and bone structure at craniocervical junction Eur Spine J 2009; 18(8): 1102-8.]. This observation could serve as an important tool for all treating physicians and especially for those performing a surgical approach on the cervical spine since it could provide important data not only for the surgical approach (selection of the side, right or left), but also for the surgical technique (size and orientation of screws) to be applied.

In conclusion, CT scan can provide accurate cervical canal measurements that could serve as a useful guide in the determination of the cervical canal stenosis, replacing the old lateral plain x-ray technique. Further studies are required to apply the Torg-Pavlov ratio on the more accurate cervical CT scans. Moreover, our measurements on the transverse foramen diameters may provide important informations to the spinal surgeons on the dimensions of the foramen and on its geometrical changes according to the cervical level, thus facilitating the preoperative planning and avoiding possible trauma to the vertebral arteries during tissue dissection and instrument application.