Meniscal cysts are rare and often are a result of extrusion of synovial fluid through a tear of the meniscus, resulting in a one-way valve effect of the tear. Arthroscopic partial meniscectomy of the meniscus with intra-articular cyst drainage has become the standard of care. We report a case of an unusually large symptomatic medial meniscal cyst, situated postero-medially and pressing on the posterior cruciate ligament, which was initially clinically misdiagnosed as a Baker’s cyst. The patient had difficulty and pain on squatting. He was successfully treated with arthroscopic debridement and needle decompression; a rarity in literature for such a voluminous perilabral cyst tenting the posterior cruciate ligament. This procedure has the advantage of being able to obtain the cystic fluid for histological and cytological analysis before debridement. This case also highlights the importance of the use of Magnetic Resonance Imaging (MRI) to accurately diagnose a central, posterior knee swelling.

Meniscal cysts are relatively uncommon affecting about 4-8% of the population [1Anderson JJ, Connor GF, Helms CA. New observations on meniscal cysts Skeletal Radiol 2010; 39(12 ): 1187-91.]. Most meniscal cysts are associated with horizontal tears of the meniscus, with communication of synovial fluid into the meniscocapsular complex. Meniscal cysts have been reported to be 3 to 10 times more commonly associated with the lateral meniscus rather than the medial meniscus [2Niceforo A, Di Giunta AC, Caminiti S, Tirrò S. A rare case of a large lateral meniscal cyst of the knee Arthroscopy 1998; 14(7 ): 759-61.]. The size of the cyst depends on the amount of synovial fluid extruded during motion of the knee joint [3Sheah K, Png MA. Meniscal cyst causing periarticulartibial erosion Singapore Med J 2005; 46(3 ): 137-9.]. Patients may present with a palpable mass over the joint line or complain of pain over the joint line [4Chang A. Imaging-guided treatment of meniscal cysts HSS J 2009; 5(1 ): 58-60.]. Treatment of symptomatic meniscal cysts would depend on the presence of a tear and can range from arthroscopic partial meniscectomy and cyst decompression to open cyst decompression and meniscal repair [5Rosenberg TD, Paulos LE, Parker RD, Harner CD, Gurley WD. Discoid lateral meniscus. Case report of arthroscopic attachment of a symptomatic Wrisberg ligament type Arthroscopy 1987; 3(4 ): 277-82.-7Regan WD, McConkey JP, Loomer RL, Davidson RG. Cysts of the lateral meniscus, arthroscopy versus arthroscopy plus open cystectomy Am J Sports Med 1989; 5: 273-81.].

We present an unusual case of a large postero-medial meniscal cyst which was initially misdiagnosed as a Baker’s cyst. AMagnetic Resonance Imaging (MRI) scan confirmed the diagnosis. The cyst was decompressed with a needle and a syringe under direct visualization and was subsequently debrided arthroscopically. Twenty-four months post-surgery, there was no sign of recurrence and the patient was pain-free and leading an active lifestyle.

A 47-year old male presented to the specialist outpatient clinic at a tertiary university hospital after being referred from a general practitioner, with an initial diagnosis of a Baker’s cyst of his right knee. The patient presented with a one-year history of localized pain over theposterior aspect of his right knee. The pain had been recurrent over the last year and was particularly exacerbated with squatting. There were recurrent episodes of swelling noted over the last 8 months associated with intermittent locking of the knee joint. The patient had no previous trauma to the knee and did not engage in sports regularly. On examination, there was a discrete 4cm diameter hemispherical cystic mass at the popliteal region of the patient’s right knee. The mass was fluctuant, firm and cystic on palpation. It was tender and immobile and was also more apparent on extension of the knee. No joint effusion was noted but medial joint line tenderness, particularly over the posterior horn of the medial meniscus, was elicited. Range of motion was 0 to 120 degrees passively, but terminal flexion was uncomfortable. There was no ligamentous instability. McMurray’s test was negative. Radiographic images of both knees did not reveal any abnormalities.

MRI scans of the right knee demonstrated a complex multidirectional tear involving the posterior horn and posterior junction of the medial meniscus, with an oblique component extending to the superior and inferior articular surfaces. A horizontal tear through the posterior horn extending postero-medially was also identified (Figs. 1 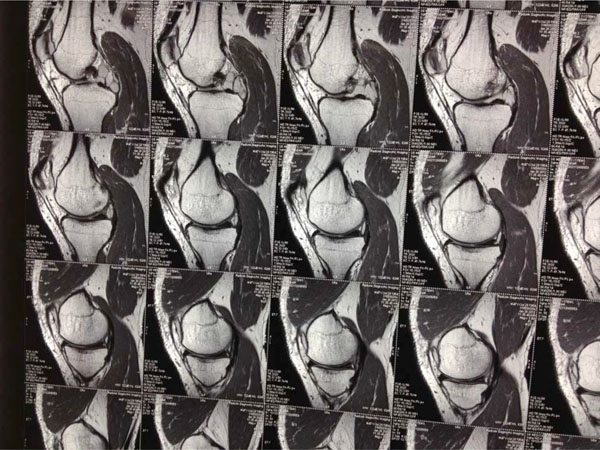 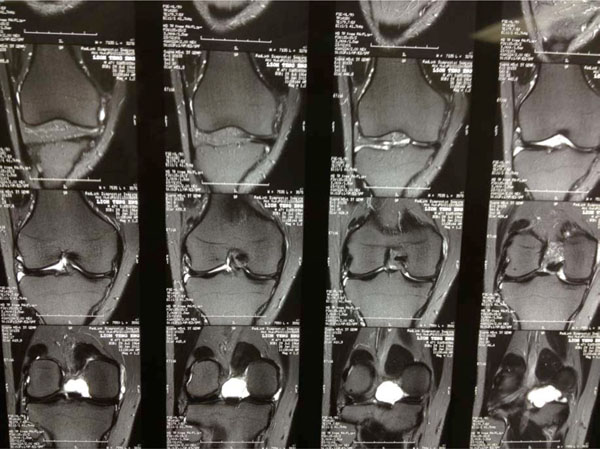 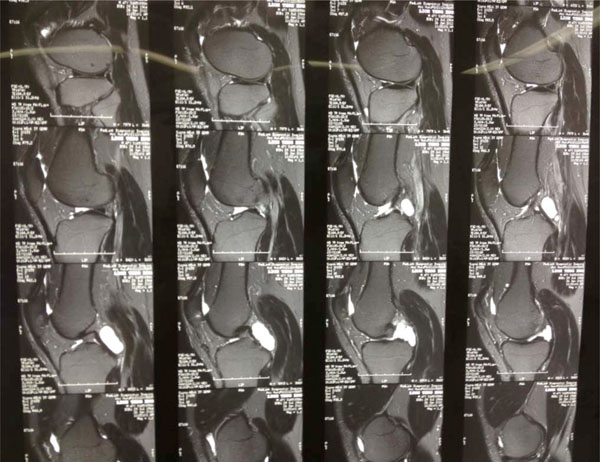 
The patient was diagnosed to have a complex degenerative tear of the posterior horn of the medial meniscus associated with a large multiloculated, parameniscal cyst. He was then scheduled for arthroscopic surgery.

Diagnostic arthroscopic examination of the knee was performed using standard anterolateral and anteromedial portals. Arthroscopy revealed a small tear of the posterior horn of the medial meniscus and a large perilabral cyst (Fig. 4 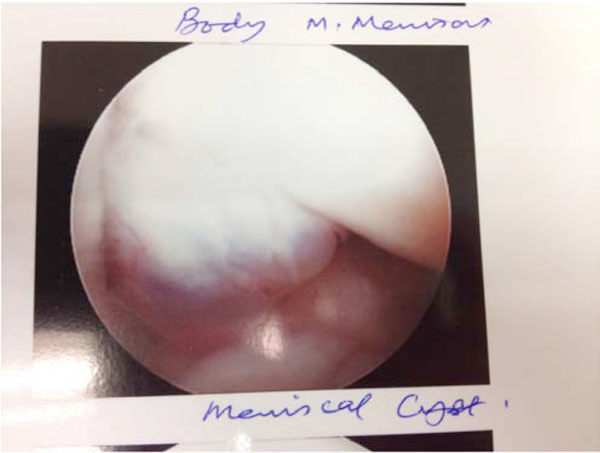 ). The cyst was punctured and aspirated using a long 10G needle under direct visualization at arthroscopy (Figs. 5 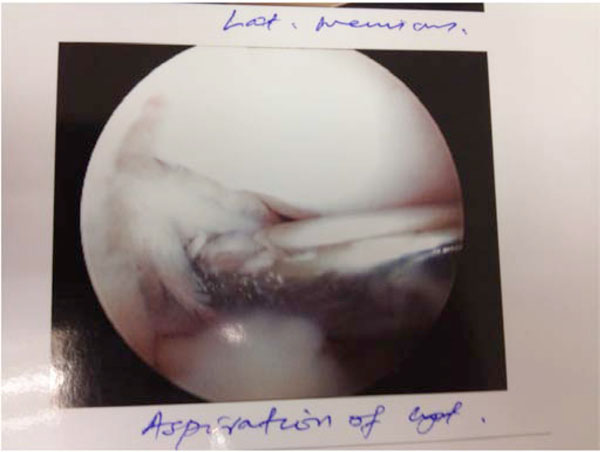 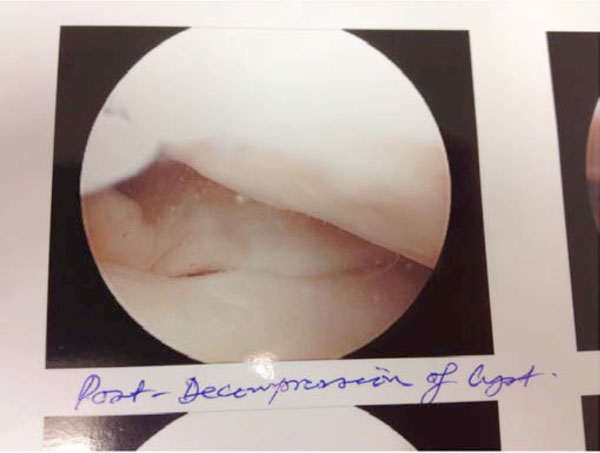 ). The cystic material was subsequently sent for cytology as well as histology. Following this, the remaining sac was debrided with a motorized shaver. Histological analysis of the gelatinous fluid revealed blood clots, macrophages and fibrinous material, with no malignancy identified. Post-operative recovery was very satisfactory and remarkable.


The patient was reviewed 24 months post-surgery. There were no signs of recurrence and the patient did not experience any pain, instability or locking of the knee. He was able to lead an active lifestyle.

A voluminous posterior medial meniscal cyst could present in the popliteal fossa, and coupled with its size, may be misdiagnosed as a Baker’s cyst. Distinguishing a meniscal cyst from a Baker’s cyst is important as Baker’s cysts are usually associated with osteoarthritis of the knee. They mayoften resolve spontaneously and hence be treated conservatively [15Kocher MS, Klingele K, Rassman SO. Meniscal disorders: normal, discoid, and cysts Orthop Clin North Am 2003; 34(3 ): 329-40.]. However, arthroscopic repair or debridement of a meniscal tear with the aim of preventing recurrence is the usual treatment for a meniscal cyst [3Sheah K, Png MA. Meniscal cyst causing periarticulartibial erosion Singapore Med J 2005; 46(3 ): 137-9.]. MRI and arthroscopy are useful in distinguishing a perimeniscal cyst from a Baker’s cyst in such a scenario. Most meniscal cysts (91%) occur immediately adjacent to the meniscal tear (98% horizontal cleavage tears, 49% anterolateral), with the tear communicating directly with the cysts, and produce a homogenous signal on MRI [16Tyson LL, Daughters TC Jr, Ryu RK, Crues JV 3rd. MRI appearance of meniscal cysts Skeletal Radiol 1995; 24(6 ): 421-., 17Mountney J, Thomas NP. When is a meniscal cyst not a meniscal cyst? Knee 2004; 11(2 ): 133-6.]. Furthermore, demonstration of a Baker’s cyst origin between the muscles of the medial gastrocnemius and semimembranosus allows for differentiation from a meniscal cyst.

We present a 47-year old male patient, with an unusually large posterior medial meniscal cyst that was initially misdiagnosed clinically as a Baker’s cyst, due to its size and position. Careful clinical examination along with imaging studies, particularly MRI, will help in such diagnoses. This case report highlights that a large posterior medial meniscal cyst can be treated successfully with arthroscopic needle decompression and meniscal debridement without open excision. Good postoperative function and symptom relief are obtained, which suggest that arthroscopic management can be considered a viable alternative to open excision of large meniscal cysts.

The figures have the written permission of the owner (National University Hospital (S) Pte Ltd).