Giant cell tumor of bone in a neoplastic stromal cell which survives for multiple passages in primary cell culture with a stable phenotype. In the pathological environment of GCT, the neoplastic nature of the mesenchymal stromal component drives local hematopoietic precursors to undergo fusion and form multinucleated osteoclast like giant cells. There is currently very limited knowledge about the pathogenesis of GCT due to the lack of suitable in vivo models for this tumor. Here we report stable gene transfer of Green fluorescence protein (GFP) in GCT stromal cells. In the present study, we have used GCT stromal cells that stably express enhanced green fluorescence protein (GFP) that are used in a new in vivo culture model. Our results show the utility of the GFP tagged cell lines that stably express GFP signals up to 52 weeks of continuous growth. The in vivo model described herein can serve as an excellent system for in vivo therapeutic and mechanistic evaluation of existing and novel targets for GCT.

Metastasis, with identical morphology to the primary tumor, occurs in a few percent of cases, usually to the lung [12Dominkus M, Ruggieri P, Bertoni F, et al. Histologically verified lung metastases in benign giant cell tumours--14 cases from a single institution Int Orthop 2006; 30: 499-504.-14Ghert MA, Simunovic N, Cowan RW, Colterjohn N, Singh G. Properties of the stromal cell in giant cell tumor of bone Clin Orthop Relat Res 2007; 459: 8-13.]. There is a need for clinically relevant in vivo models to study the molecular and cellular mechanisms underlying metastatic behavior. The major obstacle to the treatment of GCT is the lack of effective pre-and post-operative adjuvant therapy and the lack of an animal model that accurately reflects the pathophysiology of human GCT.

The aim of this study was to develop a clinically relevant in vivo model using exogenous gene transfer of GFP into the GCT stromal cell which would allow assessment of in vivo response to systemic treatment. Here we report a successfully generated GCT stable cell line and GFP expression in an in vivo mouse model of GCT. This current in vivo mouse model will be beneficial for the clinical prospective to characterize the systemic therapeutic targets in GCT and to understand the pathobiology of GCT.

Total RNA extraction was performed by TRIZOL Reagent (Sigma) according to the manufacturer’s protocol. The resuspended RNA samples were treated with ribonuclease A (RNase A)-free DNaseI for 1h at 37°C to remove residual genomic DNA. One microgram of total RNA was incubated with 2 ml primer cocktail at 68ºC and subjected to reverse transcription (RT) using Superscript III reverse transcriptase (Invitrogen) for cDNA synthesis. An aliquot of 5 μl of the reverse transcription reaction was used in a 50-μl PCR reaction. GFP signals were detected by PCR analysis using GFP (F). AAGTTCATCTGCACCACCG and GFP (R) TCCTTGAAGAAGATGGTGCG primers, respectively. The PCR conditions were 94°C denaturation for 3 min followed by 40 cycles of 94°C for 30 sec, 55°C for 40 sec, and 72°C for 50 sec. The RT-PCR products were separated on a 2% agarose gel. A 300-bp band represented the eGFP mRNA, and a 250-bp band indicated β-actin as internal control.

Cytoplasmic fractions were isolated from GFP-transfected cells by scraping after 24 h of incubation and then centrifuged for 5 min. The cells were lysed with NP-40 containing lysis buffer (10 mM Tris, pH 7.4, 10 mM NaCl, 5mM MgCl2, 0.5% NP-40) to disrupt the cell membrane and then the cell lysate was centrifuged at 500 × g for 5 min at 4°C. The supernatant (cytoplasmic fraction) was removed. Proteins were denatured by boiling in sample buffer, separated on 12% SDSPAGE and then transferred onto the PVDF membrane (Immobilon TM-PSQ, Millipore) and blocked overnight in 5% non-fat powdered milk in TBST (10 mM Tris-HCl pH7.5,100 mM NaCl, 0.1% (v/v) tween-20). Mouse monoclonal anti-GFP antibody (1:1000 diluted in TBST) (Abcam) was used for protein detection. Peroxidase conjugated goat anti-mouse IgG (1:5,000 diluted in TBST) (Sigma, Missouri, USA) was used as a secondary antibody.

Suspensions were made of one of the GFP-transfected GCT cells prior to injection in phosphate-buffered saline. Injections were prepared using 1cc syringes fitted with 27-ga needle and drawing up 0.01 mL of injectate, corresponding to a total of 105-106 cells per injection. 6-7 week old female Balb/c nu/nu mice were anaesthetized using gaseous isoflurane and injected into the sub-periosteum of the right tibia. The left tibia was injected with PBS to act as an internal negative control. Mice were monitored weekly for the presence of tumors, and then 2-3 times weekly when tumor growth was noticed. The mice were sacrificed at day 8 and 35 post-injection and stored in formalin. Both lower limbs and any tumours were then removed for further analysis. Both limbs were decalcified for two weeks (TBD-2 Decalcifier, Thermo Scientific) and processed (Shandon Citadel 2000 Tissue Processor). Decalcified limbs were embedded in paraffin wax, cross-sectioned and mounted to microscope slides.

Immunofluoresence assays were conducted according to standard protocols used by singh et al. 2010. Briefly, culture chamber slides containing the GFP-transfected GCT cells as well as slides of the sectioned tissues were first fixed in paraformaldehyde and the cells were permeabilized with Triton X-100. After blocking slides with BSA, these slides were incubated for 1h at 37°C with the rabbit polyclonal anti-GFP primary antibody (1:250 dilutions; Abcam, Cambridge, MA). Slides were further incubated in secondary antibody Texas Red conjugated goat anti-rabbit IgG (1:1000 dilutions; Invitrogen) for 1h at room temperature. The slides were washed and incubated with DAPI for three minutes and then mounted using glycerol. 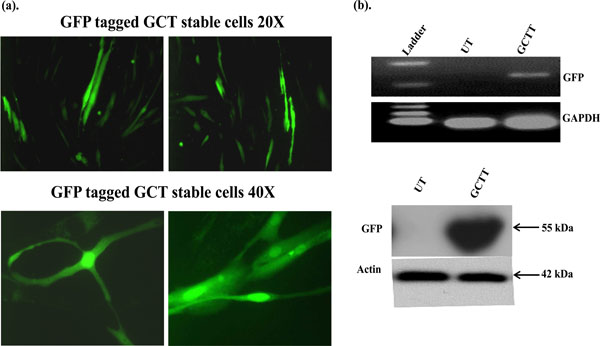 A highly invasive and spontaneously metastatic GCT human cell line was transfected with the enhanced green fluorescent protein (GFP) as previously described and treated with cell media containing 1µg/ml G418 (Invitrogen). Positive GFP transfected cells were selected under fluorescence microscope, transferred and subcultured with G418 media. Stable expression of GFP in GCT stromal cells was confirmed in cells cultured in vitro up to 52 weeks of continuous growth. These results show the in vitro utility of the GCT stromal cell lines that stably express high levels of GFP (Fig. 2 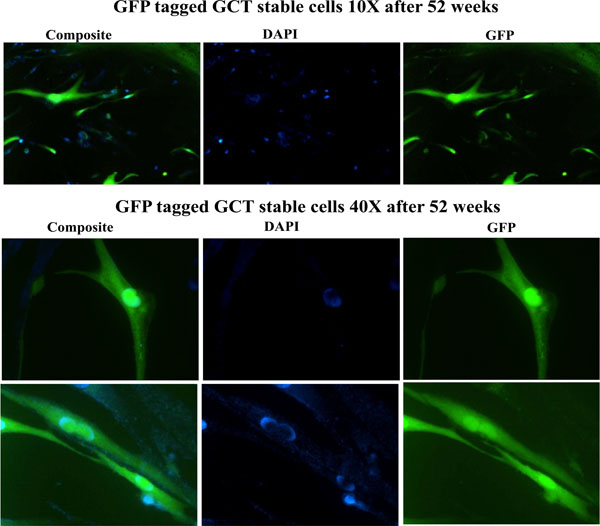 Balb/c nu/nu mice 6-7 weeks old female were used for this study and 100µl of injectate corresponding to 0.5x106-1.5x106 GFP-transfected GCT cells was injected into the sub-periosteum of the right tibia. The left tibia was injected with PBS to act as an internal control. Mice were monitored weekly for 5 weeks. The mice were sacrificed at day 8 or day 35 post-injection and stored in formalin. Both lower limbs were then removed for further analysis. We observed GFP expression in the injected limbs on days 8 and 35 (Fig. 3 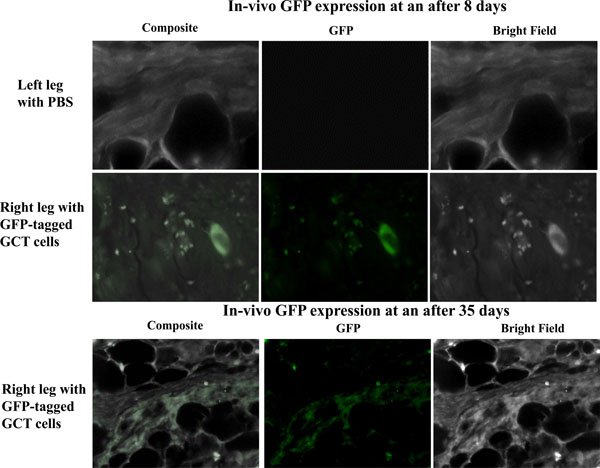 This model is the first described for GCT in which in vivo tracking of tumor viability can be successfully accomplished. Recently, a short-term in vivo model of GCT was reported using chick chorioallantoic membrane (CAM). This model was used to observe the dissemination of tumor cells along vessels leading away from the tumor [21Balke M, Neumann A, Szuhai K, et al. A short-term in vivo model for giant cell tumor of bone BMC Cancer 2011; 11: 241.]. GFP tagged GCT cells in an in vivo murine model would be a further step towards generation of a more physiologic in vivo model that could identify targets for systemic therapy in GCT.

In conclusion, we report stable gene transfection in GCT stromal cells that can survive and be visualized in vivo. The stable GCT stromal cell line described herein can serve as an excellent system for in vitro and in vivo therapeutic and mechanistic evaluation of molecular approaches to the clinical management of GCT.