A Complication During Femoral Broaching in Total Hip Arthroplasty: A Case Report

Press-fit component fixation is one of the primary goals in uncemented total hip arthroplasty. When aiming at proximal load transfer, the stem size has to be selected with regard to the shape of the proximal femoral canal. This can be challenging in patients with ‘champagne flute’ femurs with a relatively narrow diaphysis, especially when a long stem femoral component is used. The present case report describes a complication during femoral broaching for a primary uncemented femoral component. Because of the narrow diaphysis, the distal portion of the broach got caught in the narrow canal and it became impossible to remove the broach with conventional techniques. Via a second distal incision, the femur was split from the distal tip of the broach to approximately 5 cm distal of the femoral neck cut along the posterior aspects of the femur. This loosened the broach enough to allow for an uncomplicated removal. The longitudinal split was secured with cables before a similar size primary implant was press fitted into the femoral canal.

Careful stepwise preparation of the proximal femur is crucial to achieve primary component stability. Surgical broaches, gradually increasing in size, are used to prepare a predefined space for the implant. In this case report, we describe a rare complication of broaching and how it can be managed intraoperatively. 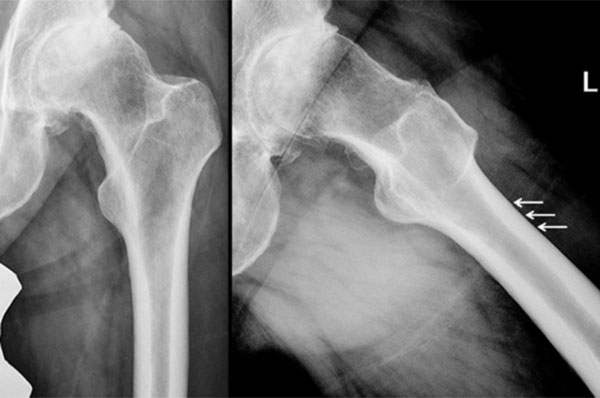 ) In the operating room, a spinal-epidural anesthesia was administered. After positioning for posterior-approach THA, an 8 cm incision was placed over the left hip. The short external rotators were indentified, released and tagged with stitches. Elevation of the gluteus minimus exposed the capsule which was subsequently incised and tagged. The hip was dislocated, the neck cut and the femoral head removed. The acetabulum was prepared in the usual fashion and a size #58 no-hole shell (R3, smith&nephew, Memphis, TN) was press-fitted.


To start the preparation of the proximal femoral canal, a box osteotome was used to open the canal. After reaming for a size #14 stem (Synergy, smith&nephew, Memphis, TN), the femur was broached for a size #14 stem. Trial reduction with a standard offset neck and a plus eight head showed restoration of the lesser trochanter-to-center distance (LTC) and the femoral offset.

Considering the configuration of the proximal femoral canal, it was assumed that the broach got hung up distally. Therefore, the decision for a second incision was made to release the broach distally. The exact length of a #14 broach was measured and an 8 cm skin incision was placed proximal to the distal tip of the implant. After dissection of the vastus lateralis, a drill was placed on the posterior aspect of the femur distal to the broach tip which was confirmed by an intraoperative radiograph (Fig. 2 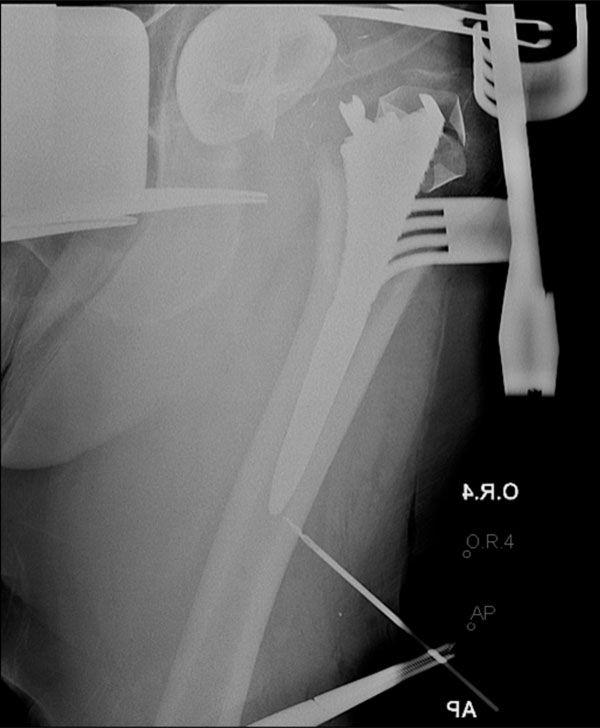 
Midway between the neck cut and the distal tip, a second posterior drill hole was placed, leaving 5-6 cm of bone proximally. Using an oscillating saw, the two drill holes were connected. After completing the posterior femoral split, the broach could now easily be extract.

Hereafter, a total of 6 Dall-Miles cables (Stryker, Mahwah, NJ) were applied: one just proximal and distal to the lesser trochanter (LT); two along the osteotomy line; and one at the tip of the implant and one distal. The cable wires were tightened and after over reaming the distal canal the same broach was re-inserted. Trial reduction showed restoration of the lesser trochanter to center distance and the femoral offset.

At this time, the broach could be smoothly removed and a size #14 stem was impacted achieving excellent press-fit. A +8, #36 head (Oxinium, smith&nephew, Memphis, TN) was added and the hip was reduced.

At the 6-week and 12-week routine follow-up appointments, the femoral implant was found to be stable with no focal lucencies (Fig. 3 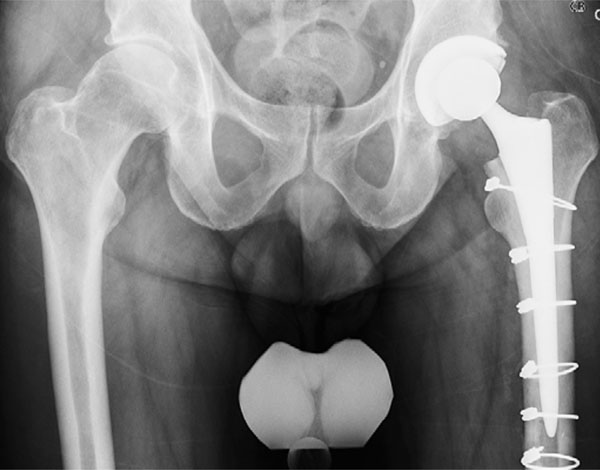 The proximal femur of our patient can be classified as Dorr type A with thick cortices on the anteroposterior (AP) radiograph. As originally described by Dorr, one can clearly appreciate the medial and lateral cortices on the AP radiograph that begin just at the distal end of the LT and quickly increase in thickness (Fig. 1

A tight anatomic fit between the stem and the endosteal surface is a key success factor in uncemented THA. When aiming at proximal load transfer with an uncemented femoral component, the stem size has to be selected with regard to the shape of the proximal femoral canal [1Callaghan JJ, Fulghum CS, Glisson RR, Stranne SK. The effect of femoral stem geometry on interface motion in uncemented porous-coated total hip prostheses. Comparison of straight-stem and curved-stem designs J Bone Joint Surg Am 1992; 74(6): 839-48., 6Pilliar RM, Lee JM, Maniatopoulos C. Observations on the effect of movement on bone ingrowth into porous-surfaced implants Clin Orthop Relat Res 1986; (208): 108-3.]. In the authors’ experience, this can be challenging to achieve, especially in patients with ‘champagne flute’ femors, and when straight and relatively long stem systems are used. Consequently, proximal loading is not always entirely achievable with these designs, and fixation is more likely to occur in the meta-diaphyseal region [14Aldinger PR, Sabo D, Pritsch M, et al. Pattern of periprosthetic bone remodeling around stable uncemented tapered hip stems: a prospective 84-month follow-up study and a median 156-month cross-sectional study with DXA Calcif Tissue Int 2003; 73(2): 115-21.].

Straight uncemented stems have been successfully introduced more than two decades ago with excellent survivorships [15Aldinger PR, Jung AW, Breusch SJ, Ewerbeck V, Parsch D. Survival of the cementless Spotorno stem in the second decade Clin Orthop Relat Res 2009; 467(9): 2297-304.]. However, the authors are not aware of any report in literature describing the management of a complication during canal broaching for long straight stems. Hirschmann et al reported on a case of an uncemented rectangular-shaped trail stem that engaged with the canal and it became impossible to remove it. The trial stem was ultimately left in situ for 17 years and underwent revision surgery because of aseptic loosening. The authors highlight the importance of initial press-fit femoral implantation and suggest that the chemistry and structure of the stem surface might be of minor importance [16Hirschmann MT, Helfrich C, Friederich NF. "Do not implant!"-- long-term follow-up of a patient who received a trial hip stem J Arthroplasty 2008; 23(8): 1239.e19-.].

The current case report describes a strategy to loosen the broach when the distal part engages with the narrow canal and it becomes impossible to remove it with conventional techniques. If such a complication occurs, a split incision along the components’ distal part disengages the distal press-fit. It appears that such a split incision reduces the press fit between the bone and round distal portion of the broach. The technique of split incisions has also previously been described as an option for the removal of well-fixed femoral components in revision surgery [17Hozack WJ, Parvizi J, Bender B. Surgical treatment of hip arthritis: reconstruction, replacement, and revision. Philadelphia, PA: Saunders/Elsevier 2010.]. Due to posterior-approach THA in the present case report, the split incision was performed on the posterior femur. Because of the round distal design of the utilized stem, the location of the split incision is probably secondary and can be adjusted according to the surgical approach. Only if a split incision is unsuccessful, we would proceed placing a tapered window on the femur. The reported management of such an unfortunate complication is safe for the patient and seems not to impair the outcome.

The present case highlights the importance of pre-operative templating and the necessity of considering individual anatomic variations when selecting the proper femoral prosthesis. Overreaming should be considered in Dorr type A femors to avoid distal fixation.

Each author certifies that he has no conflict of interest in connection with the submitted article.