Synovial Angioma of the FDP Flexor Sheath: A Rare Cause of Carpal Tunnel Syndrome

It has been previously noted that synovial haemangiomas in the hand and wrist are very rare pathological entities. We report the case of a 34-year-old right hand dominant male who presented to his general practitioner with an enlarging left volar wrist/ palmar mass, who further developed symptoms consistent with carpal tunnel syndrome. An MRI scan subsequently confirmed a large, complex mass with area of necrosis and peripheral enhancement. The rate of mass growth and radiological features raised the possibility of a soft tissue malignancy, and the gentleman was urgently referred to our unit for surgical exploration and removal of tumour. Surgical exploration demonstrated a tan-coloured soft tissue mass on the ulnar aspect of the median nerve. It appeared to arise from, and marginally infiltrated, the tendon sheath of the FDP tendon to the ring finger and the lumbrical muscle of the fourth ray; the distal and proximal extent of the tumour was difficult to define due to the diffuse growth of the tumour. Resection was achieved with macroscopic margins, with excellent functional recovery immediately and at 6 month follow-up. Histological analysis was consistent with a synovial haemangioma, comprising of numerous thin-walled blood vessels with a central cystic cavity containing blood and fibrin. Our case further demonstrates the diagnostic challenges posed by compressive neuropathy due to soft tissue masses, even with thorough clinical and radiological assessment. In the context of a rapidly growing tumour, malignancy must always be suspected and might highlight a role for pre-operative biopsy.

A 34 year old right hand-dominant male, who works as a chef, presented with a 4 month history of left wrist mass. It had increased rapidly in size during the final month. The patient also began to experience numbness of his left thumb, index and middle fingers. He was normally well and not on regular medications. There was no family history of note.

An ultrasound was initially performed which showed a large, complex cystic structure within the carpal tunnel. A subsequent MRI revealed a heterogeneous, well defined mass with fluid and solid components. The mass was located middle and ring fingers. It appeared to arise from the tendon sheath of the middle and ring finger flexors, but was not between the superficial and deep flexor tendon sheaths of the invading the tendons. It extended distally to the carpal tunnel, with overall dimensions of 19 x 24 x 38 mm. It showed peripheral enhancement and areas of necrosis, and there was no flow void (Fig. 1 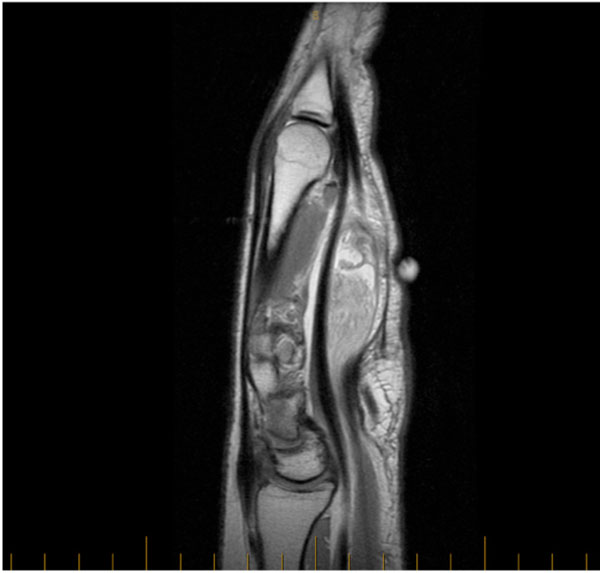 ). The median nerve had a normal appearance. In light of the clinical history and radiological features, a malignant lesion such a synovial sarcoma, was considered the likely provisional diagnosis.


The patient was referred to our unit for urgent review. On examination he had a mobile and palpable mass which moved from the mid palm to the volar wrist region with flexion and extension of his wrist. The mass was not adherent to overlying skin. He had full power in his left hand and there was no thenar muscle wasting. He had decreased sensation in his thumb, index and middle finger, and Tinel’s test was negative.

He underwent surgical exploration and removal of tumour within one week of the consultation. An extended carpal tunnel incision was made (Fig. 2 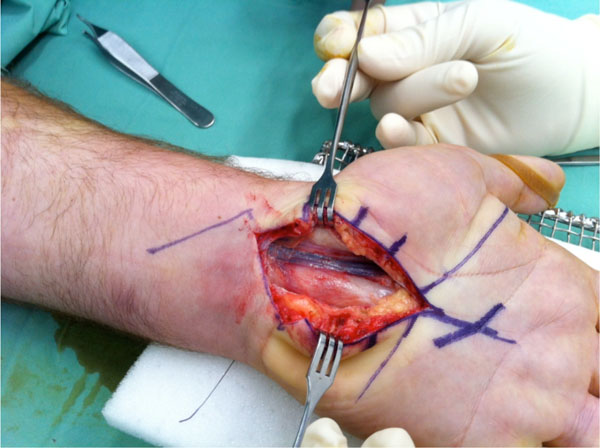 ), from the mid palm to the volar wrist. After the TCL was divided, a large tan coloured soft-tissue tumor was visible on the ulnar aspect of the median nerve. It appeared to arise from the deep flexor tendon sheath of the ring finger, extending distally to the lumbrical muscle of the 4th ray, and it infiltrated these structures only minimally. A persistent median artery was observed overlying the median nerve, which did not appear to be involved by the tumour. The tumour was resected with macroscopic margins. Post-operative recovery was uneventful and the patient reported immediate relief of compressive median nerve symptoms.


Histological analysis was consistent with a synovial haemangioma, comprising of numerous thin-walled blood vessels with a central cystic cavity filled with blood and fibrin (Fig. 3 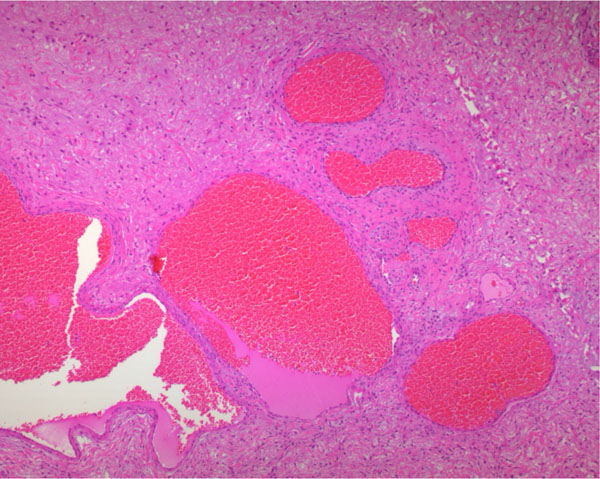 ). There was no evidence of malignancy.

Previous reports suggest that surgical outcome can be optimised with accurate preoperative assessment and diagnosis. However, this is difficult to achieve when encountering rarely encountered soft tissue tumours (eg synovial angiomas) arising from anatomically complex spaces (such as the carpal tunnel) [5Kang HJ, Jung SH, Yoon HK, Hahn SB, Kim SJ. Carpal tunnel syndrome caused by space occupying lesions Yonsei Med J 2009; 50(2): 257-61.]. Apart from the presence of a mass, clinical history and examination are often non-specific. Adjunctive imaging, such as MRI, can be helpful but often non-specific for soft –tissue tumour diagnosis [15Chalidis B, Dimitriou C. Carpal tunnel syndrome due to an atypical deep soft tissue leiomyoma: The risk of misdiagnosis and mismanagement World J Surg Oncol 2007; 5: 92.], especially when the mass is a haemangioma. Our case contained the radiographic hallmarks of a potentially malignant neoplasm – rapidly growing mass with complex structure, areas of focal necrosis and peripheral enhancement, and lacked the flowed voids normally associated with benign vascular lesions [16The J, WHiteley G. MRI of soft tissue masses of the hand and wrist Br J Radiol 2007; 80: 47-63.]. Further radiological clarification might have been obtained by digital subtraction angiography, however this requires an index of suspicion that the tumor is of vascular origin [9Greenspan A, Azouz EM, Matthews J, et al. Synovial hemangioma: imaging features in eight histologically proven cases, review of the literature, and differential diagnosis Skeletal Radiol 1995; 24: 583-90.].

Our case further demonstrates the diagnostic challenges posed by compressive neuropathy due to soft tissue masses. In the context of a rapidly growing tumour, malignancy must always be suspected. A clear pre-operative diagnosis optimises patient’s safety and surgical outcome. Given the difficulty in assessing soft tissue tumours of the carpal tunnel, radiological correlation should be sought from a unit with an interest in soft tissue neoplasms to supplement thorough clinical assessment. Moreover, radiologic guided biopsy could further aid pre-operative diagnosis and management planning.

We would like to thank Prof Soon Lee & Dr Yvonne Bogun from the Department of Anatomical Pathology, Royal Prince Alfred Hospital.