Humeral Rotational Osteotomy for Shoulder Deformity in Obstetric Brachial Plexus Palsy: Which Direction Should I Rotate?

Shoulder internal rotation contracture is the most common deformity affecting the shoulder in patients with Obstetric Brachial Plexus Palsy. With progression of the deformity, the glenohumeral joint starts to subluxate and then dislocates. This is accompanied with bony changes of both the humerus and the glenoid. Two opposite direction humeral osteotomies have been proposed for this condition (internal rotation osteotomy (IRO) and external rotation osteotomy (ERO)). This fact of different direction osteotomies has not adequately been explained in the literature. Most orthopedic surgeons may not be able to fully differentiate between these two osteotomies regarding the indications, outcomes and effects on the joint. This review explains these differences in details.

Obstetric brachial plexus palsy (OBPP) is an injury to the nerves of the upper extremity of the newborn that happens during labor. Erb’s palsy (C5,6) is the most common type of OBPP. Most of the infants with Erb’s palsy will show spontaneous full recovery [1Greenwald AG, Schute PC, Shiveley JL. Brachial plexus birth palsy: a 10-year report on the incidence and prognosis. J Pediatr Orthop 1984; 4: 689-92., 2Abdelgawad A, Naga O, Eds. Birth injuries and orthopedic manifestations in newborns. Handbook for primary care physicians . Springer New York: : Pediatric Orthopedics 2014; pp. 75-83.]. However, some of them will have residual weakness of shoulder’s external rotation which will result in an internal rotation deformity of the affected shoulder in these children. If this internal rotation deformity is not repaired, it may progress to posterior dislocation of the shoulder joint with bony deformity of the glenoid [3Hoeksma AF, Ter Steeg AM, Dijkstra PF, Nelissen RG, Beelen A, de Jong BA. Shoulder contraction and bony deformity in obstetrical brachial plexus injury. J Bone Joint Surg 2003; 85A: 316-22.].

The shoulder internal rotation deformity is treated surgically either by soft tissue release or by bony osteotomy. Traditionally, the osteotomy was done for older children with dislocated shoulders. The direction of the osteotomy was external rotation osteotomy. The purpose of the surgery was to improve the cosmetic and the function of the upper extremity. This osteotomy would ignore the deformity in the glenohumeral joint as it will actually result in more posterior dislocation of the humeral head in relation to the glenoid.

Articles and book chapter which described the osteotomies for shoulder deformity in Erb’s palsy did not emphasize on the fact that there are two opposite direction osteotomies for the same condition which can cause great confusion among readers.

The purpose of this article is to clarify these two opposite direction humeral osteotomies in cases of shoulder deformity as a result of OBPP, compare between these two types in regard to the indications, concepts and outcomes and to help the orthopedic surgeons identify the difference between these two osteotomies. Articles describing osteotomies for obstetric brachial palsy have been reviewed. Pubmed search has been conducted using “Erb’s palsy”, “obstetric brachial plexus palsy” together with osteotomy. Cross reference has also been used. In addition, pediatric orthopedic book chapters have been reviewed for their description of humeral osteotomies in cases of OBPP.

Some of the children with Erb’s palsy will develop posterior dislocation early in their course of disease. This condition was thought to be rare, however, in the last two decades many publications about infantile posterior shoulder dislocations were made and have suggested that the onset of glenoid dysplasia which accompanies obstetric brachial plexus palsy occurs at an earlier age than what has been previously recognized and that the prevalence of this problem may have been underestimated [10Moukoko D, Ezaki M, Wilkes D, Carter P. Posterior shoulder dislocation in infants with neonatal brachial plexus palsy. J Bone Joint Surg 2004; 86B: 787-93.-12Torode I, Donnan L. Posterior dislocation of the humeral head in association with obstetric paralysis. J Pediatr Orthop 1998; 18: 611-5.].

This osteotomy has been the standard of treatment in older children. The results of this osteotomy have been very satisfying with improvement of both external rotation and, to a lesser degree, abduction of the shoulder joint. Improvement of abduction has been attributed to a better mechanical alignment of the deltoid muscle. On the other hand, there is always some loss of internal rotation with this procedure (manifested by the child not able to reach his/her abdomen by his/her hand).

The osteotomy is usually performed proximal to the level of deltoid tuberosity to improve the alignment of the deltoid. Some authors have recommended adding flexion of the distal part of the humerus to cause an increase in elevation of the arm [14Al-Zahrani S. Combined Sever’s release of the shoulder and osteotomy of the humerus for Erb’s palsy. J Hand Surg Br 1997; 22: 591-3.]. Others have recommended adding varus component to repair the abduction contracture [18Waters PM, Bae DS. The effect of derotational humeral osteotomy on global shoulder function in brachial plexus birth palsy. J Bone Joint Surg Am 2006; 88: 1035-42.]. External immobilization is usually not needed if the osteotomy is fixed with plates and screws. Tables 1 and 2 show pre and ostoperative range of motion for some studies which used ERO. Fig. (1 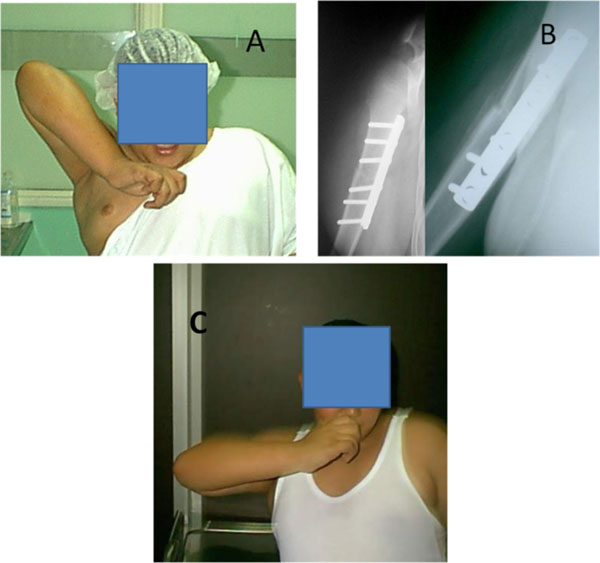 Results of ERO by degrees of ROM.

Showing the results of preoperative and postoperative Mallet score [26] for the studies using ERO.

Sibinski and Synder [23Sibinski M, Synder M. Soft tissue rebalancing procedures with and without internal rotation osteotomy for shoulder deformity in children with persistent obstetric brachial plexus palsy. Arch Orthop Trauma Surg 2010; 130(12): 1499-504.] described internal rotation osteotomy (IRO) with tendon transfer. They started first with soft tissue procedures and then checked the arc of motion. In cases where humeral head was dislocated in internal rotation, the IRO of proximal humerus was done to improve joint stability. Ten patients out of 25 needed the IRO. They found that active internal rotation difference in children treated with IRO was significantly higher than that in those treated without osteotomy. The other movements (including external rotation) were similar before and after surgery in both groups. The authors concluded that the addition of IRO to soft tissue procedures around the shoulder allows better internal rotation and maintains stable reduction without compromising other movements.

Similarly, Kambhampati et al. [24Kambhampati SBS, Birch R, Cobiella C, Chen L. Posterior subluxation and dislocation of the shoulder in obstetric brachial plexus palsy. J Bone Joint Surg Br 2006; 88-B: 213-9.] prospectively studied 183 consecutive cases of subluxation (101) and dislocation (82) of the shoulder secondary to obstetric brachial plexus palsy between 1995 and 2000. Authors did anterior release and relocation then they measured the degree of retroversion. They performed IRO if the humerus was retroverted more than 40° or if the head was particularly unstable after relocation. This procedure was necessary in 70 of the 183 shoulders.

Table 3 shows the difference between ERO and IRO.

The difference between ERO and IRO.

Both external rotation osteotomy (ERO) and internal rotation osteotomy (IRO) have a role in the management of shoulder deformity in patients with obstetric brachial plexus palsy. Each osteotomy has its indication, effect on the glenohumeral joint and effect on the child’s shoulder range of movement. Pediatric orthopedic surgeons treating these children should understand the difference between these two opposite direction osteotomies. They should decide which osteotomy the patient needs and plan the appropriate surgery according to the condition of the patient.