Purpose of this Study:

The aim of this study was to evaluate the outcomes of surgical intra-osseous fixation of the distal tendon of the ruptured biceps brachii muscle using Mitek anchors.

Between 2005 and 2011, seven patients underwent unilateral distal biceps tendon repair using Mitek anchors. All patients were men aged between 36 and 47 years. Six patients were assessed by physical examination and use of the Disabilities of the Arm, Shoulder, and Hand (DASH) questionnaire.

Surgery was performed within 3 to 17 days of rupture with a mean follow-up of 35 months. Of the six fully completed DASH questionnaires, three patients had a score of 0, and three patients had scores of 5.8, 10 and 10.8, respectively (10.1 is the mean score for the general population). Transient paraesthesias in the lateral antebrachial cutaneous nerve region occurred in two patients and one patient experienced a transient stiffness of the elbow due to scarring of the wound. No major complicatons have occurred.

The use of Mitek anchors for the re-insertion of the ruptured distal biceps tendon proved to be a safe and effective technique with excellent functional results in our series.

Six patients consented for final assessment by the same surgeon. The time interval between injury and surgery, duration of surgery, length of hospital stay, and post-operative complications were noted. Functional results were assessed using the Disabilities of the Arm, Shoulder, and Hand (DASH) questionnaire and range of motion measurement. The DASH questionnaire is a self-administered, region-specific outcome instrument developed as a measure of self rated upper extremity disability and symptoms. The DASH questionnaire, is a validated outcomes tool consisting of a 30-item disability/symptom scale, with a score of 0 reflecting no disability and 100 reflecting severe disability [8Gummesson C1, Atroshi I, Ekdahl C. The disabilities of the arm, shoulder and hand (DASH) outcome questionnaire: longitudinal construct validity and measuring self-rated health change after surgery BMC Musculoskelet Disord 2003; 4: 11.].

Surgery was performed in the supine position under general anaesthesia and a bloodless field. A lazy ‘S’-shaped single incision over the antecubital fossa was made and the torn biceps tendon was identified. Preparation was continued along the natural tunnel of the tendon to the radial tuberosity. Four unicortical holes were made at the site of the footprint followed by the creation of a hatch in the first bone cortex between the four holes using an osteotome (Fig. 1

). A Mitek drill bit was used to create holes in the opposite cortex, into which Mitek anchors were placed (Fig. 2

). Finally, the tendon was fixed within the hole by tying the sutures according to the Bunnell technique (Fig. 3


Postoperatively, the elbow was immobilised in a plaster in 90 degrees flexion and in a neutral position between supination and pronation for 5 weeks. Thereafter, active, low demand exercises were started. After 3 months, loading of the tendon-bone complex was gradually increased and 6 months post-operatively full loading of the elbow was permitted.

In six patients, the time interval between injury and surgery ranged from 3 to 17 days. In one patient, the time between injury and surgery could not be retrieved. The mean duration of surgery was 65 minutes (range 51-80 minutes). Five patients were discharged on the same day of surgery. The two remaining patients were discharged one and 2 days following surgery, respectively (Table 1).

At the final post-operative follow-up, five patients had a full range of motion in four directions at their elbow and one patient had an extension deficit of 18 degrees and a supination deficit of 15 degrees. One patient was lost to follow-up.

Six patients consented to undergo an MRI scan of their affected elbow. In two of these patients, imaging through MRI could not be performed due to claustrophobia and a cardiac pacemaker, respectively. In the remaining four patients, the fixed tendon through the bone cortex was in place with evident ingrowth of the tendon in the surrounding bone. No heterotopic ossification was observed. Fig. (4 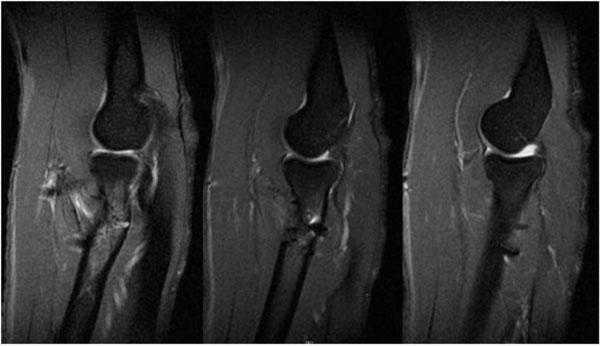 ) shows the tendon against the cortical bone and partly in the cortex incorporated, in the medullary cavity the bone marrow is seen. In Fig. (5

), the next MRI slice, the full integration of the tendon in the cortical bone is depicted. A trace of fluid around one anchor is found. In Fig. (6

), the next slice, only the 2 anchors are shown, the tendon is not visible anymore.

No major complications have occurred. Two patients experienced transient paraesthesias in the lateral antebrachial cutaneous nerve region and one patient experienced stiffness of the elbow due to scarring of the wound, which resolved completely after vigorous physical therapy.

The key findings of this study are the undisturbed ingrowth of all the re-inserted tendons noted in the original radius footprint and the full return of function in all patients except for one patient who experienced a minor supination and extension deficit. The intraosseous repair procedure, demonstrated in our study is comparable with the femoral insertion of a hamstrings graft during Anterior Cruciate Ligament repair [12Paulos L, Greenwald A. Endoscopic ACL Reconstruction - Mitek Anchor Surgical Technique Surg Technol Int 1994; 3: 571-6.]. Our technique led to a full integration of the tendon in all four patients in which MRI investigation could be performed.

The DASH questionnaire is a validated scoring system that can detect and differentiate small and large changes in disability over time after surgery in patients with upper extremity musculoskeletal disorders. It was used as the primary outcome measurement tool in this study, but not before the reconstruction, which can be seen as a limitation of this study. A 10-point difference in mean DASH score should be considered a clinically insignificant change [8Gummesson C1, Atroshi I, Ekdahl C. The disabilities of the arm, shoulder and hand (DASH) outcome questionnaire: longitudinal construct validity and measuring self-rated health change after surgery BMC Musculoskelet Disord 2003; 4: 11.]. Hunsaker et al. reported that the mean DASH score for the general population is 10.1 [13Hunsaker DM1, Thorne LB. Suicide by blunt force trauma Am J Forensic Med Pathol 2002; 23(4): 355-9.]. The results of our study, with DASH scores ranging from 0 and 10.8 (mean less than 4.9), demonstrate excellent functional outcomes.

Using the two-incision technique, the most frequent reported complication is persistent injury to the lateral antebrachial cutaneous nerve [6El-Hawary R1, Macdermid JC, Faber KJ, Patterson SD, King GJ. Distal biceps tendon repair: comparison of surgical techniques J Hand Surg Am 2003; 28(3): 496-502.]; other complications, such as loss of range of motion, heterotopic ossification, and persistent elbow pain, are also reported. The use of Mitek anchors allows fixation via a single incision approach, thereby reducing the risk of complications compared to the two-incision technique. However, two out of seven patients in our series experienced a transient paraesthesia of the lateral antebrachial cutaneous nerve due to traction neuropraxy caused by the wound retractor placement during surgery. This is acknowledged as a limitation of the success of this technique. A quantification of the likelihood of transient paraesthesia occurring from this technique would require a larger sample size; however, recruiting an appropriate number of patients for a larger study is challenging due to the low incidence of distal biceps tendon rupture.