It has been assumed that nucleus pulposus-induced activation of the dorsal root ganglion (DRG) may be related to an activation of sodium channels in the DRG neurons. In this study we assessed the expression of Nav 1.8 and Nav 1.9 following disc puncture.

Thirty female Sprague-Dawley rats were used. The L4/L5 disc was punctured by a needle (n=12) and compared to a sham group without disc puncture (n=12) and a naive group (n=6). At day 1 and 7, sections of the left L4 DRG were immunostained with anti-Nav 1.8 and Nav 1.9 antibodies.

At day 1 after surgery, both Nav 1.8-IR neurons and Nav 1.9-IR neurons were significantly increased in the disc puncture group compared to the sham and naive groups (p<0.05), but not at day 7.

The findings in the present study demonstrate a neuronal mechanism that may be of importance in the pathophysiology of sciatic pain in disc herniation.

Thirty female Sprague-Dawley rats with an average body weight of 200-250g were housed in groups with free access to food (B&K Rat/mouse standard, BeeKay feeds & beddings, Sollentuna, Stockholm) and tap water. Temperature was kept at 21°C, light schedule was 12 hours daylight starting at 6:00 a.m. and 12 hours darkness starting at 6:00 p.m., and the humidity was kept at 50%. The experimental protocol was approved by the local animal research ethics committee.

Surgical protocol [1Olmarker K, Myers RR. Pathogenesis of sciatic pain: role of herniated nucleus pulposus and deformation of spinal nerve root and dorsal root ganglion Pain 1998; 78(2): 99-105.]: The rats were anesthetized by inhalation of isoflurane. Through a midline incision, the thoracolumbar fascia was incised just left to the spinous processes of the 4th and the 5th lumbar vertebrae. The erector spinae muscle was gently moved laterally to expose the left facet joint between the 4th and the 5th lumbar vertebrae. The joint, including articular processes, was carefully removed. By this procedure, the ligamentum flavum, the left L4 DRG and the intervertebral disc could easily be identified. To form a control group for the surgical exposure of the spinal canal, no additional procedures were undertaken in twelve rats (sham group: n=12). To perform a disc herniation, a 25 Gauge needle was used to puncture the exposed disc (NP group: n=12). By gently injecting some air through the needle there was a leakage of nucleus pulposus out to the DRG. To ensure contact between the nucleus pulposus and the nervous tissue the obtained nucleus pulposus was transferred with the tip of the needle to the 4th lumbar nerve root and DRG. No surgical intervention was performed in the Naïve group (n=6).

The total number of neurons and Nav -like immunoreactive (IR) neurons with visible nucleus in one complete transverse section was counted. Neurons showing higher intensity than background were considered positive using imaging analysis software (NIH image J). The cross sectional area of the neurons was also examined to categorize to small sized neurons (<600μm2), medium sized (600-1200μm2), and large sized neurons(>1200μm2). To be able to observe as many neurons as possible, we picked sections from the central one third of DRG as defined by the shape of the DRG. Six randomly selected sections were examined per rat. The percentage of Nav -IR neurons of the total number of neurons was calculated. The results are expressed as the percentage of Nav -IR neurons in the DRGs (mean ±standard error of the mean).

Both Nav 1.8 and Nav 1.9 were stained positively in the somata of the DRG neurons in all experimental groups, especially in the small-sized neurons (<600μm2) (Figs. 1


At 1st day after surgery, the percentages of Nav 1.8-IR neurons significantly increased in the disc puncture group compared with the Sham and Naïve groups in small sized neurons(p<0.05) (Fig. 3 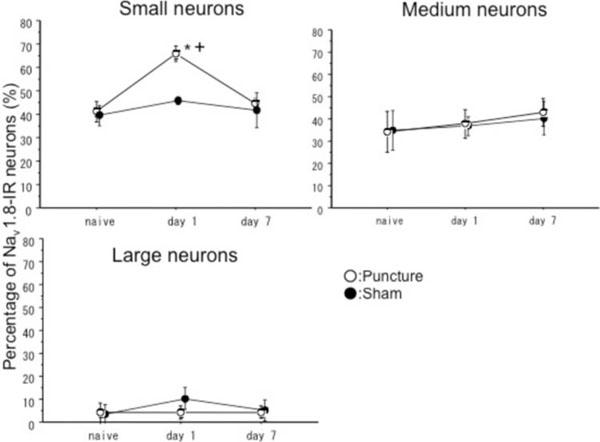 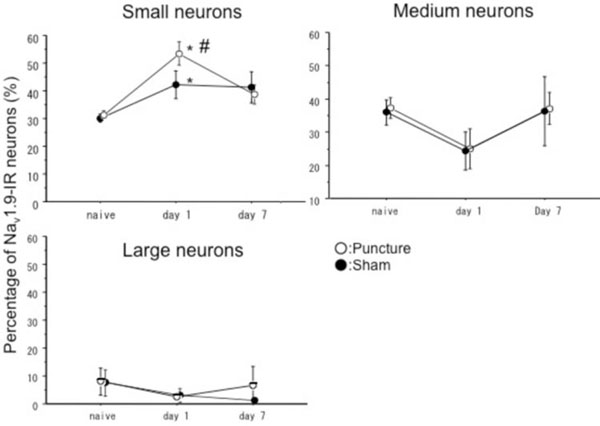 One discrepancy between the present and previous studies was that upregulation was not found seven days after surgery in our study, whereas pain behavior changes, although less pronounced than at day 1 or 3, may still be seen at day seven [1Olmarker K, Myers RR. Pathogenesis of sciatic pain: role of herniated nucleus pulposus and deformation of spinal nerve root and dorsal root ganglion Pain 1998; 78(2): 99-105., 2Kawakami M, Tamaki T, Hayashi N, et al. Mechanical compression of the lumbar nerve root alters pain-related behaviors induced by the nucleus pulposus in the rat J Orthop Res 2000; 18(2): 257-64.]. In the present study ion-channels were only studied in the dorsal root ganglion neurons and it is suspected that there may be a similar upregulation in the axons of the nerve roots that may sustain more than seven days. Also other modes of injury, such as simultaneous nucleus pulposus-exposure and mechanical deformation would be of certain interest, as well as the treatment with sodium channel-inhibitors. This will be assessed in future studies.

Clinically, sciatic pain induced by lumbar disc herniation is sometimes so pronounced that it is difficult to control the pain by presently available conservative treatment modalities such as NSAIDs, or nerve root block with local anesthetics and steroids. New strategies are needed to provide an alternative to surgery in such cases. Since the present immunohistochemical study indicates that sodium channels in DRG neurons may be increased by nucleus pulposus-exposure, specific blockages of neuronal sodium channels might offer such an alternative.

This work was supported by grants from the Swedish Research Council (521-2007-2956), the Gothenburg Medical Society, AFA Insurance, the Ollie and Elof Ericsson Foundation for Scientific Research, Stiftelsen Olle Engkvist byggmästare, the IngaBritt and Arne Lundberg Research Foundation, the Spine Society of Europe Task force on research and the Felix Neubergh Foundation.